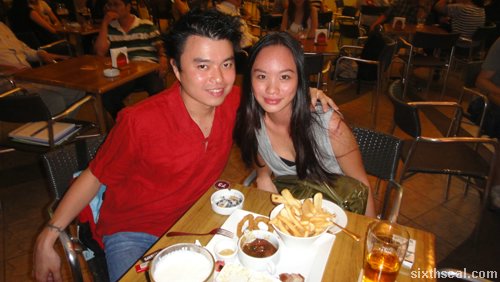 The Friday night out

It all started on Friday night at Brussels Beer Cafe. It was during this inspiring round of drinks that the impromptu trip hatched. I was supposed to meet Bonnie there and truth to be told I don’t even remember how I got to know her and inquiring minds want to know. I also had half a mind to FFK the drinks on Friday thing coz I was really sick but I’m glad I didn’t coz it turned out to be one of the best weekends I’ve ever had. 🙂

We were having drinks in Jaya One when I finally got around to around to asking her how we know each other. It turns out that we don’t. She reads my blog, added me on Facebook and it was a random and casual “Okay, let’s have drinks sometime” that led to this particular day. Bonnie turns out to be 22 (!!!) and she’s a student at Monash. She also acts part time in local productions.

Anyway, it seems that we have something in common so we were just talking and suddenly I thought about going on a road trip. It was 12 am at the time and the plan was to head down to Ipoh for the dim sum. 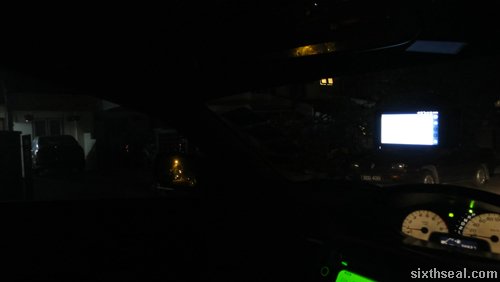 I’ll follow her car back, pick her up, and then head down to Ipoh and stay the night at a hotel before waking up for breakfast.

The first thing that went wrong was losing my wallet. I think what happened is that I took it out and used my credit card to pump gas. I remember leaving the wallet on the boot of the car and taking the receipt but I did not remember taking the wallet back into the car. I suspect my wallet was still on the boot when I drove off. FML.

I had about 1-2k inside but what’s worse is the MyKad, driver’s license (!!!) and credit cards which I have to replace.

I only realized it when I got to Ipoh coz when it came to the toll, Bonnie paid for it but I was puzzled as to where my wallet was – it was supposed to be on the dashboard. However, after a prolonged search when we arrived there, it was nowhere to be found. My car can be a black hole sometimes, but it’s still a confined space so after looking into every nook and cranny, the most plausible explaination is that I left it on the boot and drove off.

Naturally, without any money, Bonnie had to withdraw from an ATM and we went in search of a hotel. 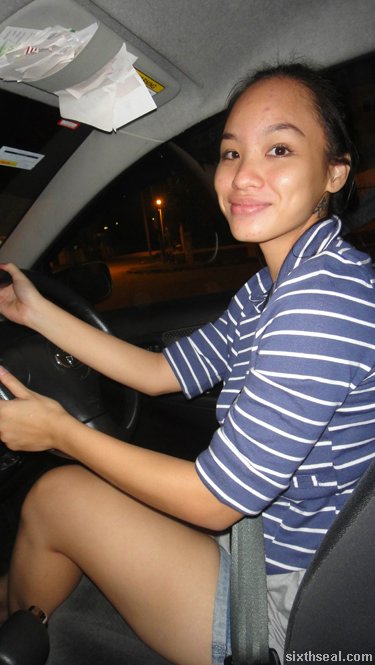 She also took over the driving. 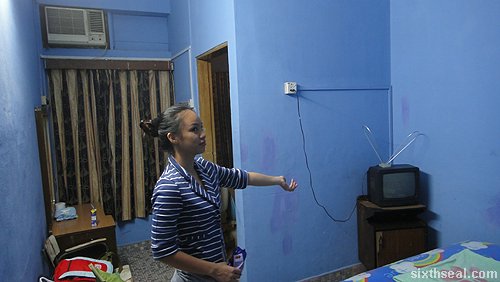 I think we went to 5-6 hotels but all of them were full. It was insane! There’s apparently some kind of military function going on there and it was about 5 am when we finally drove up to this dodgy looking place called Shanghai Hotel. 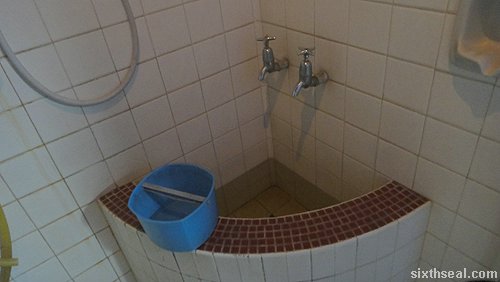 They had one room left and it was RM 40. I guess some would call it rustic and charming and maybe even full of character but it’s the kind of place where you’re afraid you’ll get syphilis, gonorrhea AND herpes just from sleeping on the sheets. >.<

Anyway, my pillow had this really weird smell to it so I shared Bonnie’s pillow and we slept, fulling intending to wake up at 8 am in the morning. 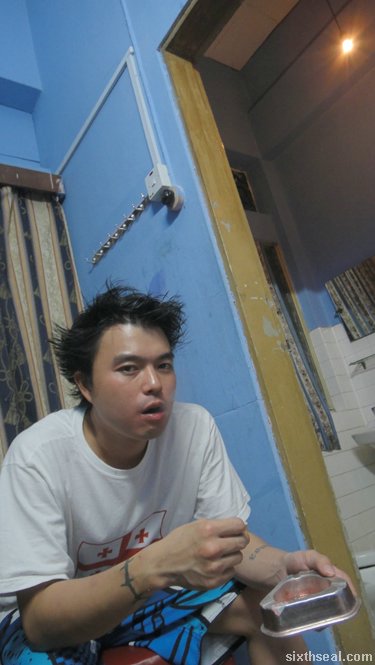 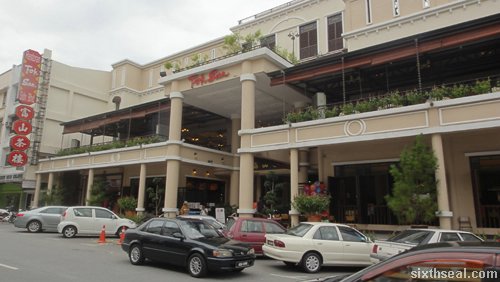 This is what we were down in Ipoh for. Bonnie swears by the lam mei pau. It’s a bun that’s filled with fatty pork and it’s absolutely fabulous. It was well worth the drive down. 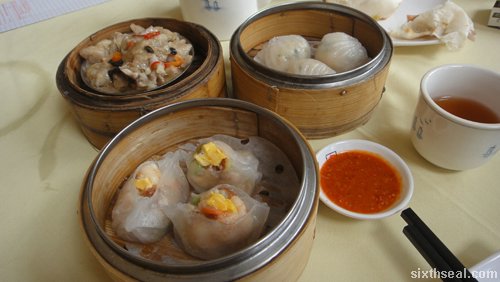 We also had some other stuff – my usual har kao (prawn dumplings) and a memorable dim sum made with juicy succulent prawns and salted egg yolk. 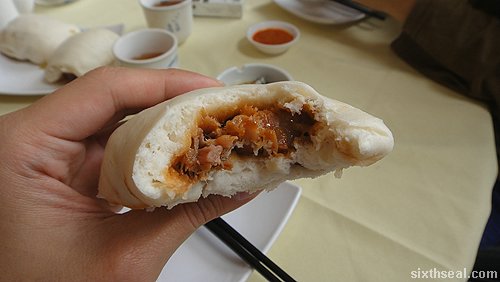 However, the lam mei pau was every bit as good as Bonnie said it was. We were afraid we’ve missed it but apparently even though the dim sim place tells you it’s no longer available, you can get it by going to the take away counter and ordering it. 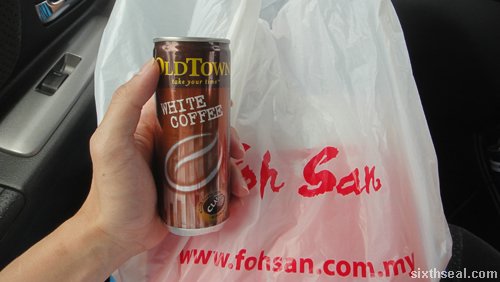 Try it, and thank Bonnie (or rather, her mom) if it works. We even got a box to tapau back home.

Anyway, since I didn’t have a license and Bonnie was rushing for her class, she drove down instead. It was an interesting experience to have someone else drive you car at 160 km/h and swerving through lanes to avoid traffic. It’s like a roller-coaster, without the safety features. 😉 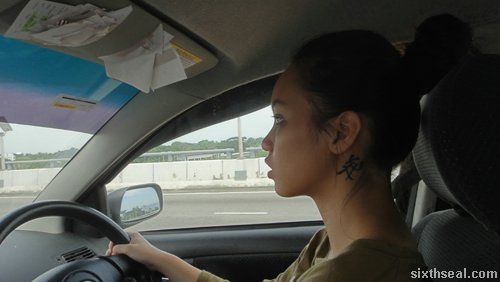 Oh, and I also lost my rear bumper somewhere during the drive to Ipoh. 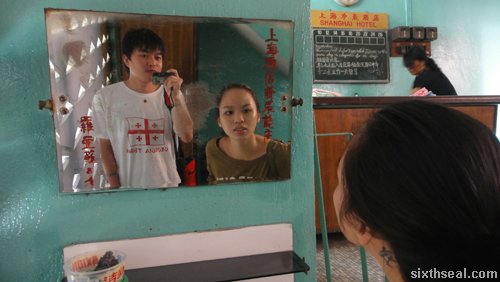 It’s not an epic weekend unless you’ve lost a car bumper, your wallet and all the identification in it, slept in a dodgy hotel and sped back to KL…and the weekend is still not over. Bonnie crashed at my place last night and helped me out with something I had to get done during the weekend.

I know it sounds like a tragic weekend, but it’s really an awesome one. Seriously, it’s not a havoc weekend unless you’ve lost something and now I’m driving with no driver’s license, MyKad and with a missing bumper. 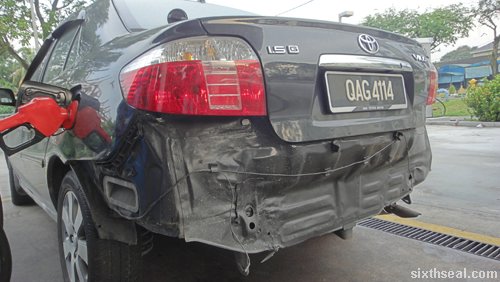 Cop magnet much? This illegal PRC immigrant says yes. I’ve been diligently avoiding roadblocks so let’s hope I can keep up with that until Monday.

I had a great weekend. How’s yours? 😉

57 thoughts on “Epic weekend: An impromptu trip to Ipoh, dodgy hotels, losing my wallet and my car bumper”