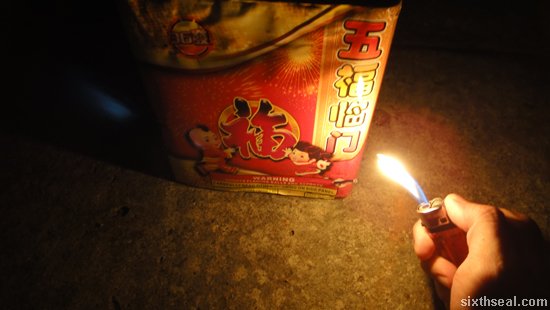 It’s made in China. Quality control is not a big priority over there and with no regulating body, malfunctions are bound to happen. When it happens with multi-shot aerial barrages, the results aren’t pretty. The first one happened to my neighbor during Chinese New Year eve when a 48 shot cake blow up right after the fuse went off.

It sent flaming balls of fire everywhere and I watched for a while before the tubes totally lost their integrity and sent some my way. I’m telling you it was the first time for years I’ve ran into the house. My neighbor shouted a quick warning and beat a hasty retreat as well.

It’s a good thing nothing major happened (except to the car of my neighbor). 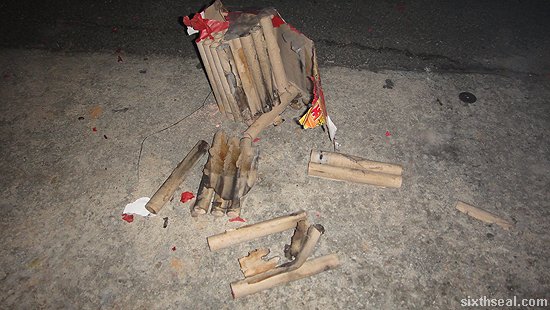 One of my smaller fireworks cake (a 36 shot) also blew up on the ground a few minutes later. However, this happened after most of it has been sent flying into the air to burst at the proper distance so the damage isn’t that bad.

I was filming it too, and I didn’t even realize it blew up until I felt something zip past me into the house and set one of my t shirts on fire. I was remarkably calm in the video though coz I thought it was a plain misfire (when a tube goes awry) instead of the entire cake blowing up. I was just standing 1 meter away!

You can hear sounds of explosions and fireworks despite none going airborne and the clacking of flying cardboard mortar tubes flying everywhere towards the end.

My mom who was watching from the inside was more concerned since she saw the entire thing. However, most of it missed me though and it was lucky that it happened towards the end. 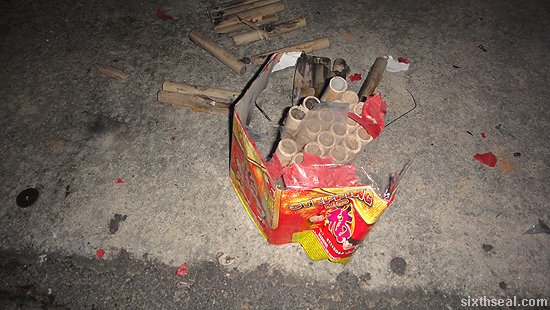 The other lucky thing that happened is that some of the tubes didn’t ignite (see the white, unblemished cardboard) so it didn’t cause an all out explosion – this can happen if the explosive force separates the burning ones from the rest in time. It’s not a built in safety precaution – merely chance and luck. 🙂

Why do fireworks cake barrages misfire?

1. Well, it’s made up of cardboard mortar tubes.
2. These tubes are linked by a fuse to create an aerial barrage of pyrotechnics.
3. A catastrophic event happens when the tube is not loaded properly and instead of the fuse burning into the next tube in line, the mortar tube (there’s a lot in a fireworks cake) explodes, causing a chain reaction that sends all the other tubes into a massive conflagration on the ground. 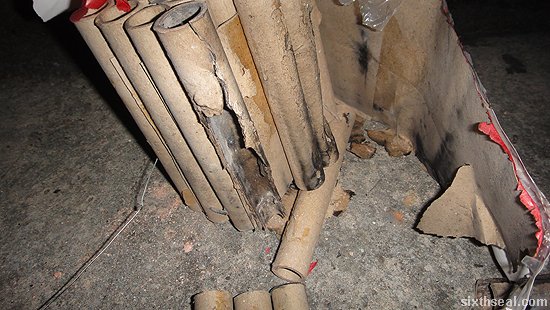 You can see where the problem has occurred – instead of burning on to the fuse, it explodes and sends the other mortar tubes on fire – the entire integrity of the cake has been compromised then (it’s not meant to go off on the ground but in the air) so the tubes all start firing in every direction. 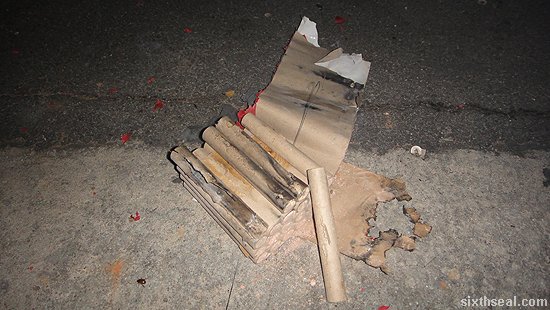 This is caused by the Stepping Up 36-shot barrage and I had to pick up cardboard mortar tubes from as far as 25 meters away. 😡 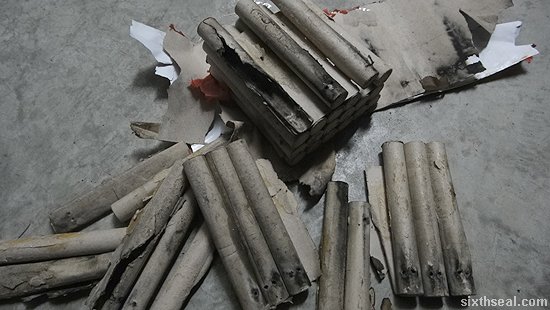 It’s a good thing this is my smaller fireworks cake instead of the bigger ones. I have a huge 20 kg one with 3” shells that would probably wreck havoc if it explodes on the ground.