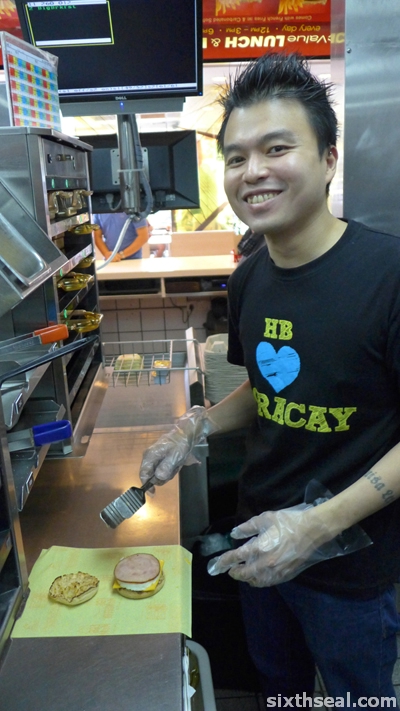 I was at McDonald’s Bandar Sri Damansara over the weekend. I took a typhoid jab before that in preparation to work inside the kitchen. 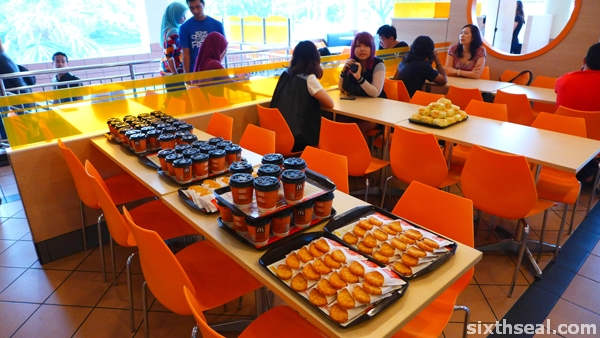 There were platters of hash browns, McMuffins and coffee/tea for everyone when I arrived and the second floor was full of people who came for the Bloggers’ Breakfast Session. 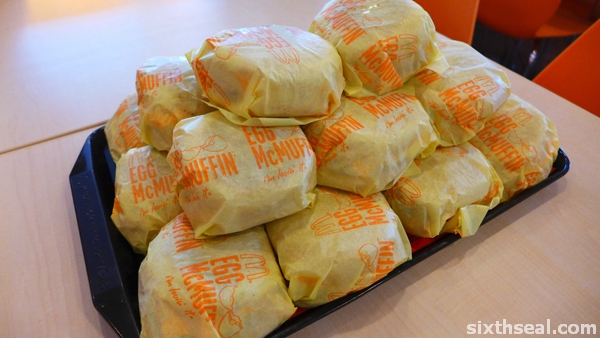 Five of my readers turned up with their +1 – Eiling, Adel, Simon, Brenda and Cindy. Rachel was there too, which makes up my montage of 6 photos! 🙂 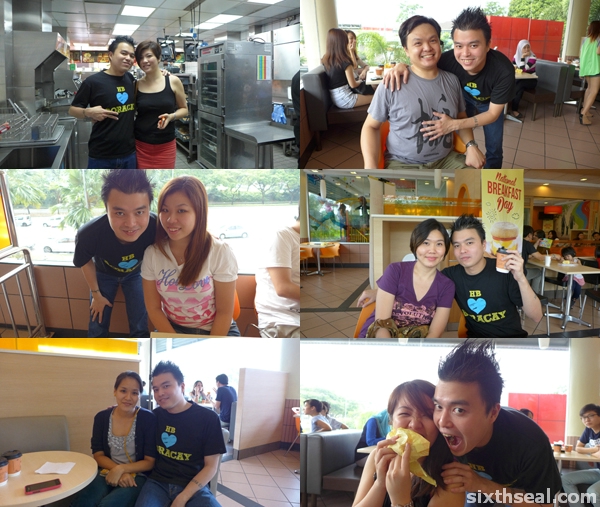 There was a kitchen tour involved where we go to see the inside of a typical McDonald’s kitchen. 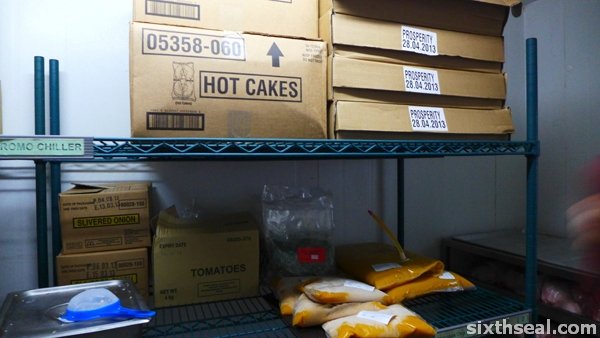 Here’s the freezer which contains everything from orange juice to specific items like “slivered onion”. 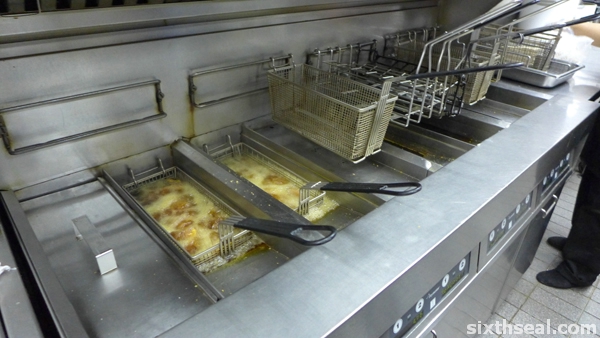 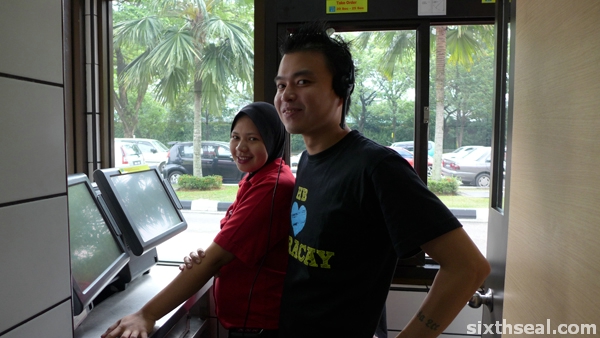 I also managed to go into the drive-thru kiosk to take an order. 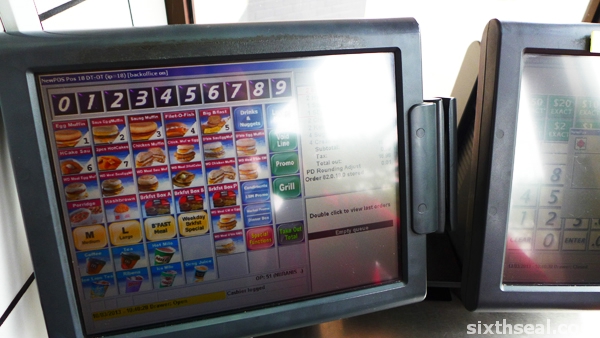 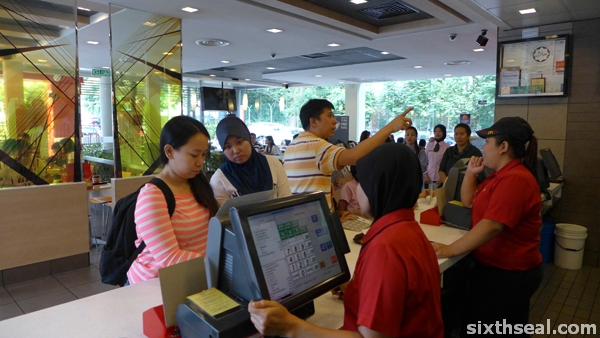 However, what was even more fun was that I got the opportunity to prepare breakfast. Look ma! I’m at the other end of the counter! 😀 This is actually meant for customers (thus the typhoid shot). 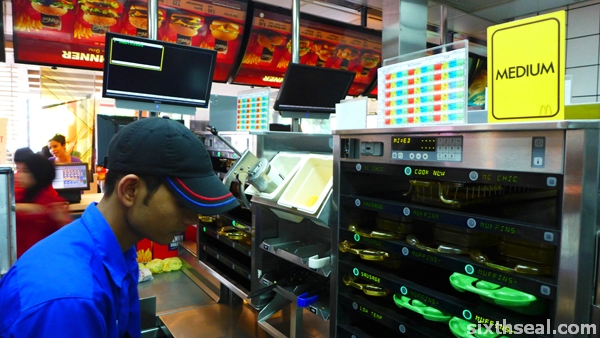 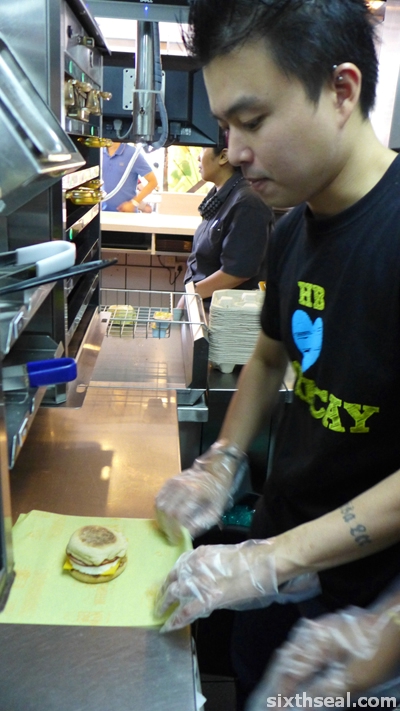 I did an Egg McMuffin! 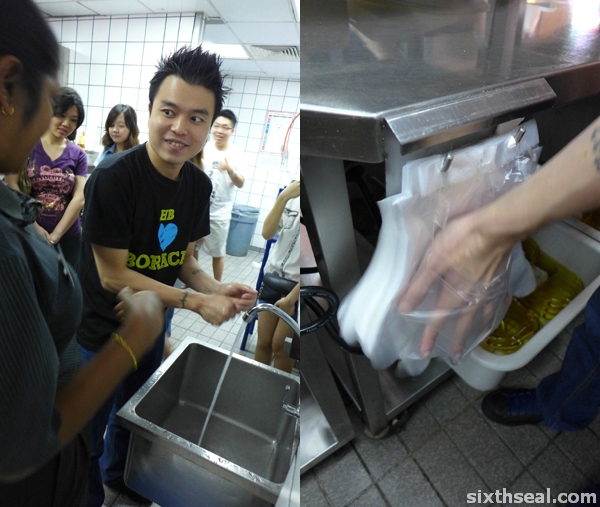 I had to wash my hands and don gloves before that – the gloves in particular intrigued me. You don’t need to touch anything, just slip your hands through the plastic gloves and you’re set for handling the food. 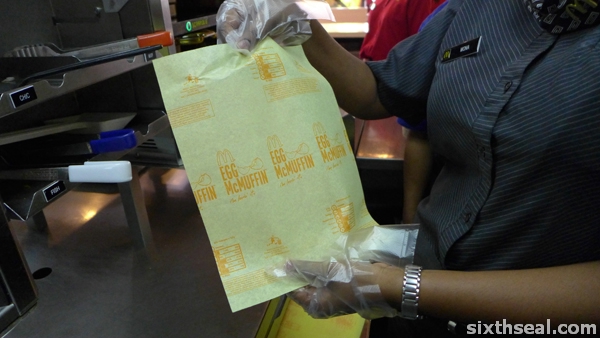 The Egg McMuffin is done by taking two English muffins and putting them on the correct paper. There’s a crown and a base for the muffins, all items should be stacked on the latter. 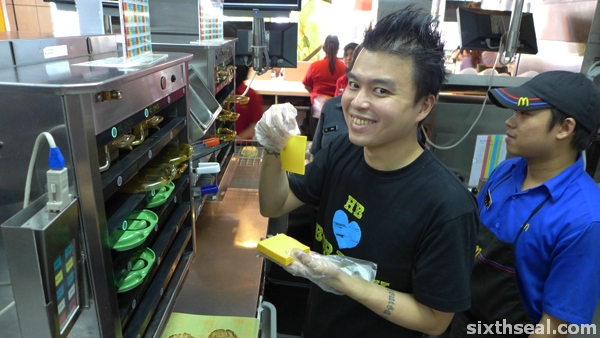 You start with a slice of cheese on the muffin… 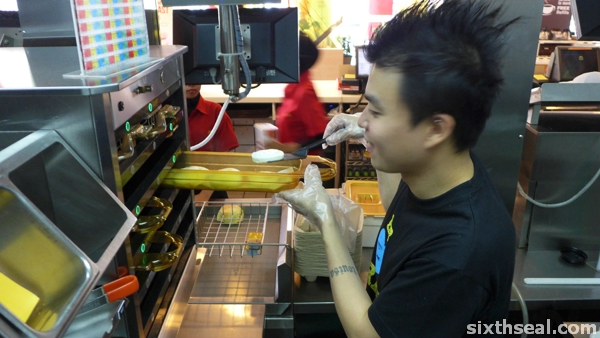 …pick a perfect egg from the freshly cooked batch and stacking it on with a spatula. 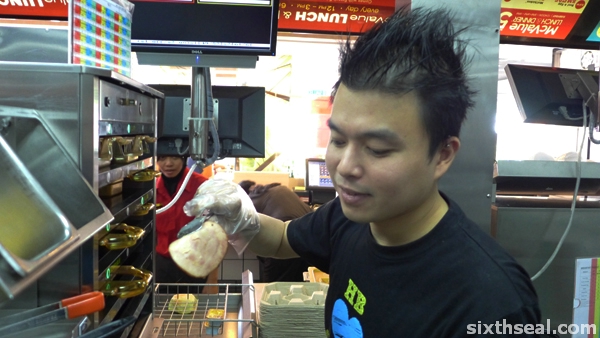 Before choosing a slice of chicken roll and placing that on top. 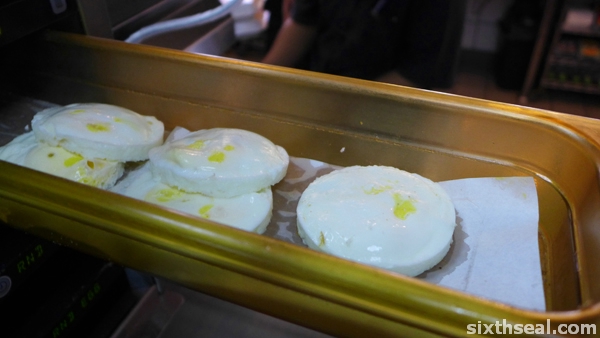 The preparation area is heated (!!!) and so are all the food items, which are discarded after a period of time. 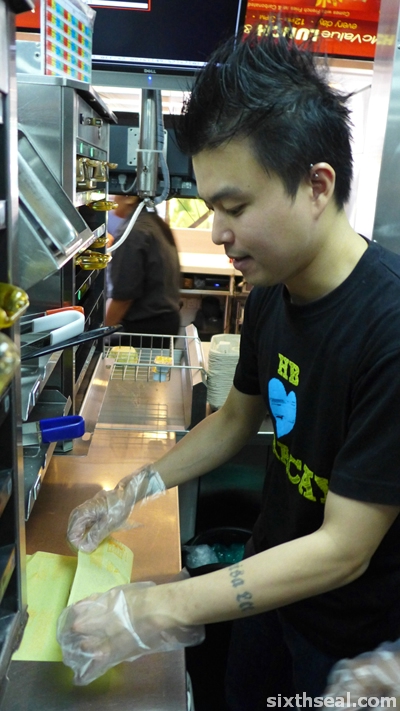 There is also a standard way to place and wrap the Egg McMuffin up – everything is done exactly so an Egg McMuffin you order here would be the same as anywhere else in the world. 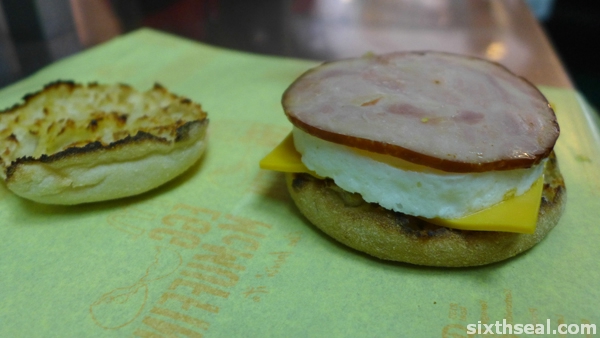 I was supposed to serve my Egg McMuffin out but I wanted to eat that so I asked if I could. 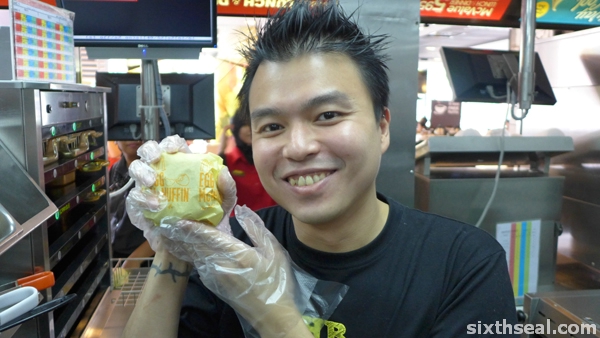 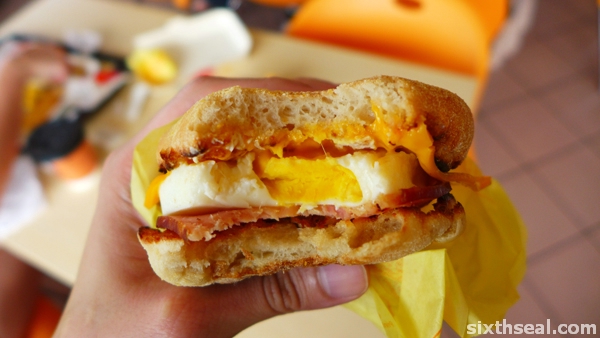 I had a lot of fun doing that. 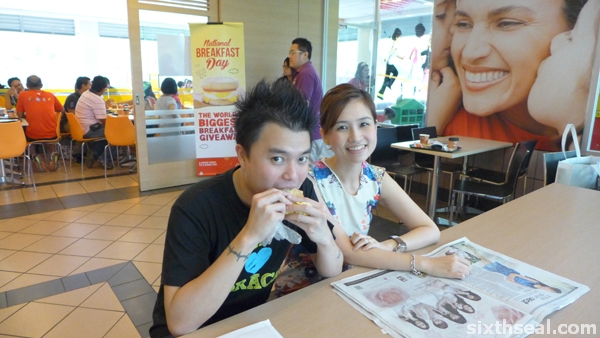 Here’s a shot with Caydence, who’s with McDonald’s! 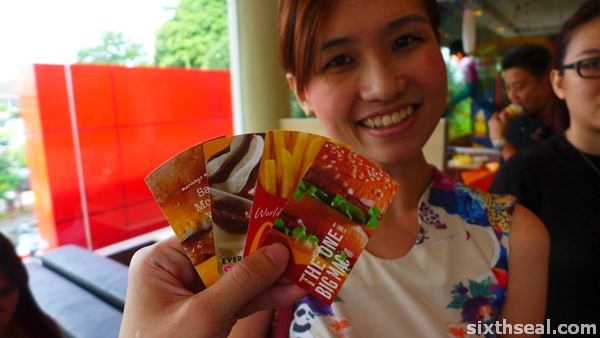 She has four (4) different name cards – well, it’s the same but the front bit is different. I thought that was really cool! 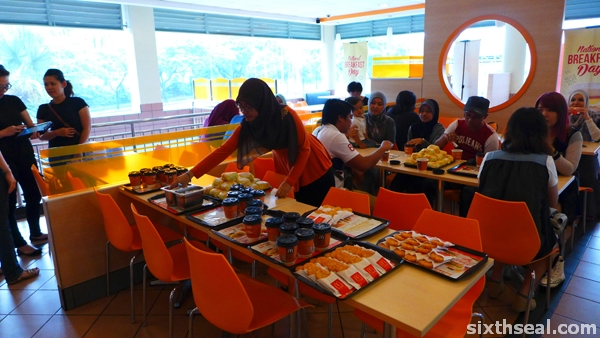 Oh yeah, you remember the importance of breakfast that I was writing about? Well, there was a McDonald’s Breakfast Day last year where 200,000 Malaysians joined the McDonald’s Breakfasts Movement. I was puzzled at the queue at the local McDonald’s so early in the morning – it was due to them serving out free breakfasts. 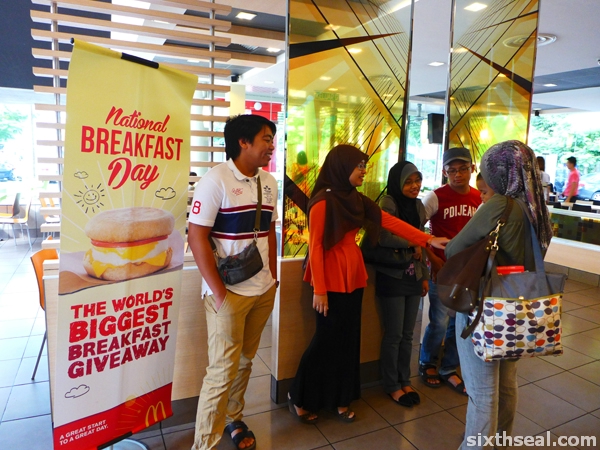 This year, there will be a National Breakfast Day on the 18th March 2013 where an estimated 5 million (!) Egg McMuffins will be given out to stress the importance of a wholesome and freshly prepared breakfast. 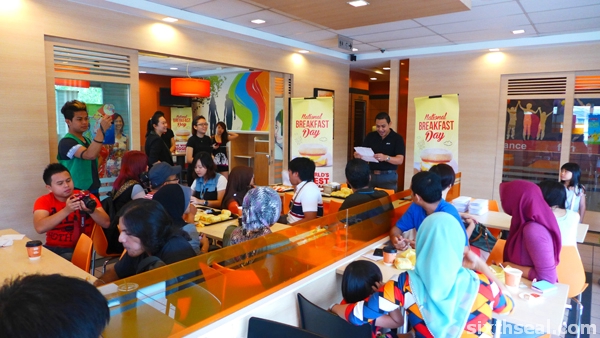 It’s the World’s Biggest Breakfast Giveaway! In Malaysia, each of the 222 McDonald’s Breakfast Restaurants will offer a FREE Egg McMuffin to the first 1,000 customers from 7 am to 10 am on National Breakfast Day on 18th March 2013! There’s a hilarious site called Not a Morning Person where you can get more information.

Mark that date folks, and catch up with a co-worker or a loved one over an Egg McMuffin!

29 thoughts on “I made my very own Egg McMuffin!”