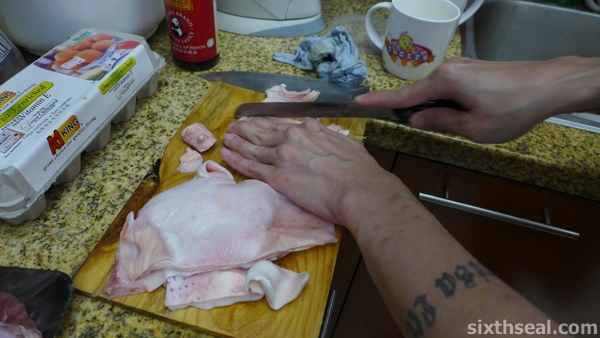 This is not your usual noodle dish. The noodles are made of pig skin. It’s not pork noodles – it’s pig skin noodles! The noodle is not the carbohydrate in this dish – it’s the protein! I first came across this in an episode of Andrew Zimmern’s Bizarre Foods America. I did a quick search for the restaurant that serves this and came across a blog post that describes exactly how to make pig noodles out of pig skin. 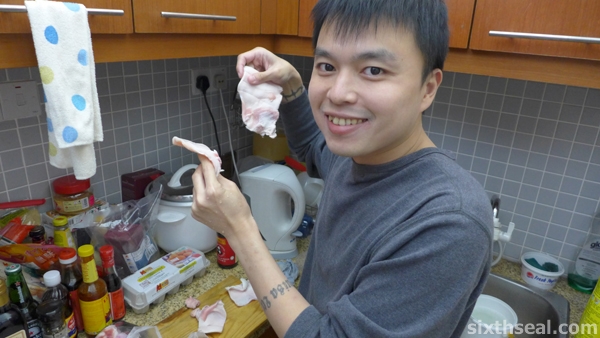 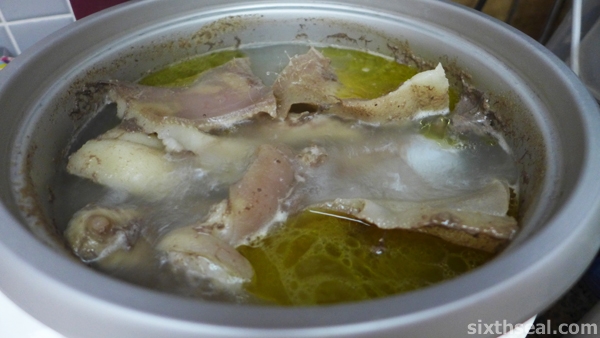 The clerk was puzzled for a second while processing what I really wanted and took a bag from under the counter. She gave it to me free of charge. I wonder why it was bagged like that in the first place but it didn’t register right then coz I got into a conversation of what I wanted to do with the pig skin – to make noodles! 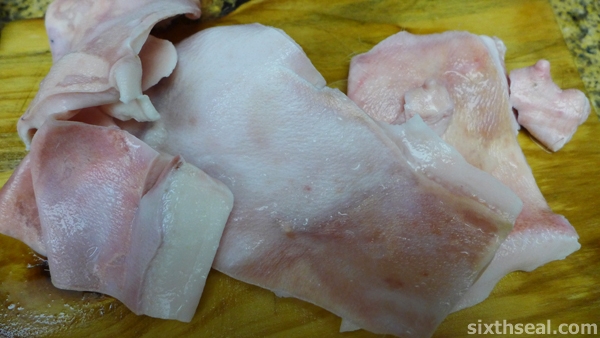 The pig skin I got is from the belly (as can be seen from the teats) and I tried slicing it but the skin proved to be way too tough for any of my knives so I decided to wait until I’ve finished it. I wanted to make pig skin noodle ramen like the post I read in From Belly to Bacon – but with a different twist. I’ll do a two animal broth! 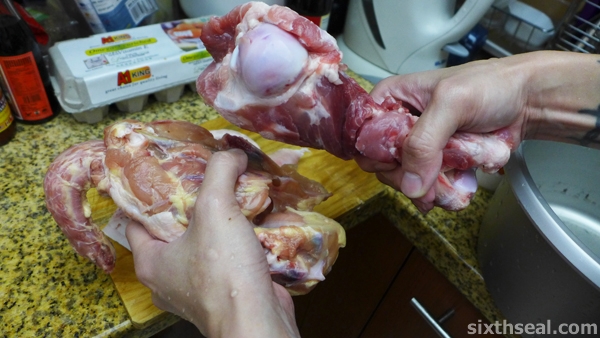 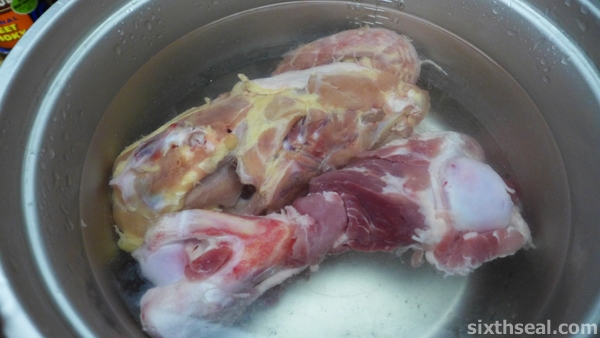 I used a chicken carcass and a large pig bone for soups in my cooker. There are ramen places like Santouka Ramen that’s famous for their chicken broth and other Japanese ones who use the traditional pork broth. I wanted a combination of both. 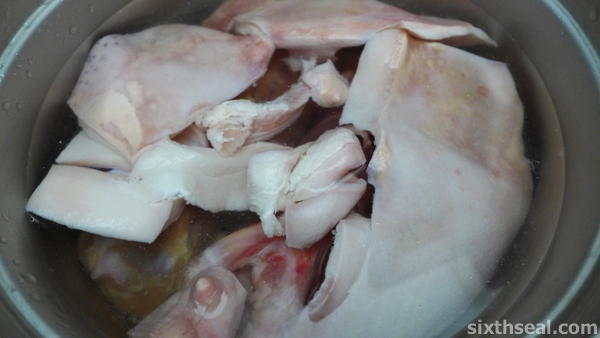 The rice cooker was filled up to 1.8 litres of water, after the displacement made by the chicken carcass and pig bone. I also threw in the pig skin so it’ll be easier to cut once it’s tender and cooked. 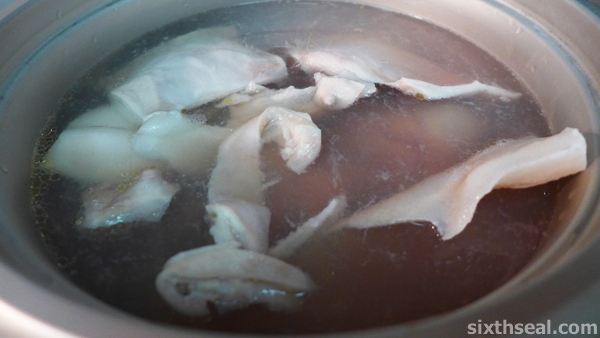 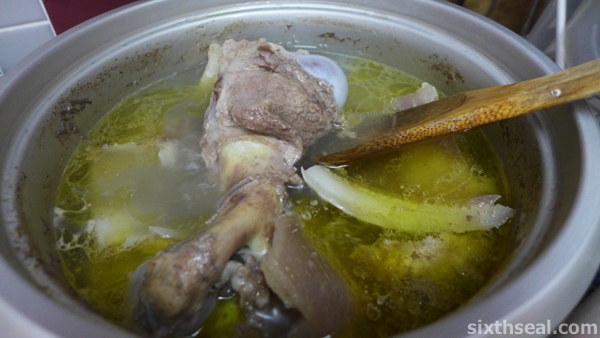 to boil the ramen stock. It was an overnight event with alarms set to refill the cooker. 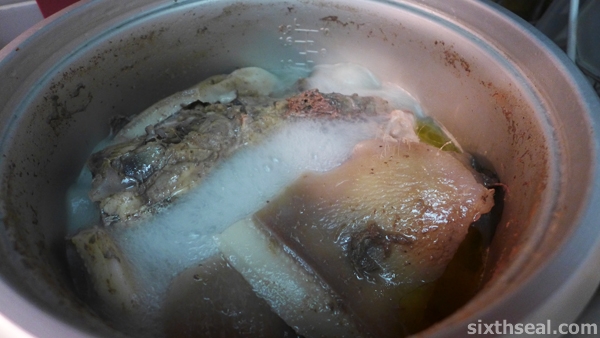 However, I made a *very big mistake* – I left the pig skin in too long. I should have taken it out at the 2 hour point and cut strips out of it. I left it in for the entire 14 hour duration and it was a soggy mess when I attempted to slice it into strips of noodles. 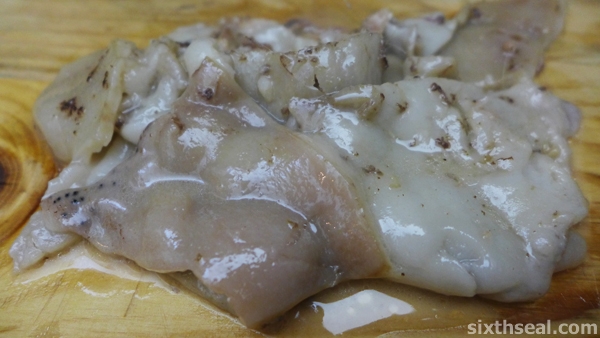 It was quite a feat since everything in the cooker was pulverized and reduced into a very yummy and gelatinous goo. I did manage to slice it and poured the broth (it’s way thicker than what you’ll associate with this word) over it for a bowl of ramen. 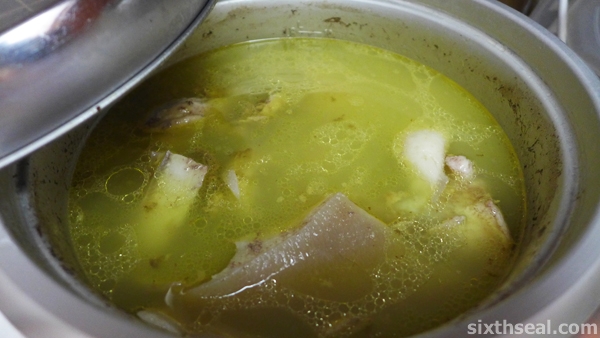 This is my first attempt. I would like to do two things differently next time: 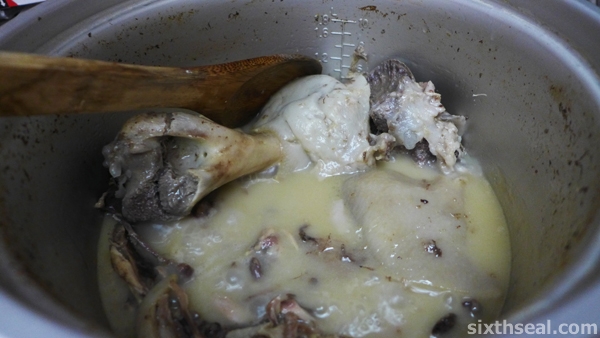 The end result after 14 hours of boiling – very hearty and thick semi-liquid with a consistency more like lard than water. We both liked a small bowl but eating more than that would be quite a challenge due to the heavy stock. 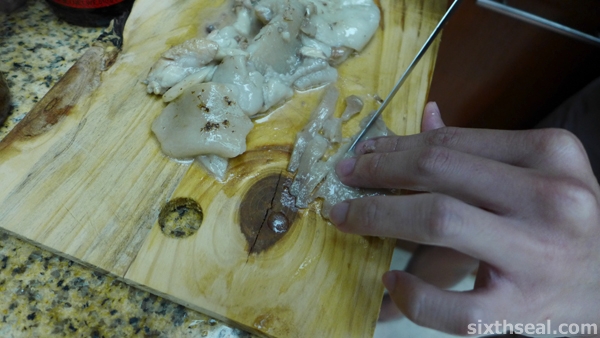 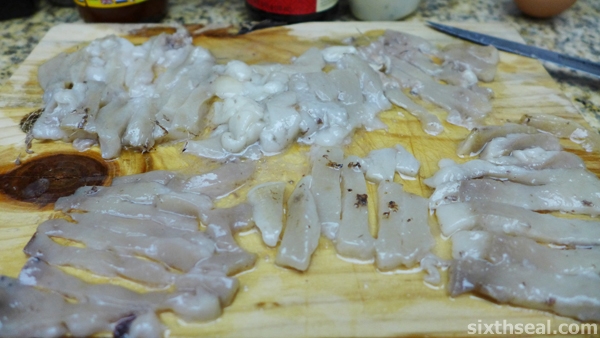 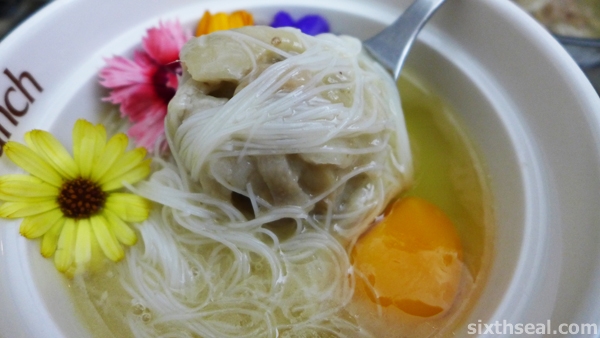 My better half managed to eat her bowl though. I did hers with some rice vermicelli to provide some carbohydrates – the pig skin noodle is the protein in this dish! 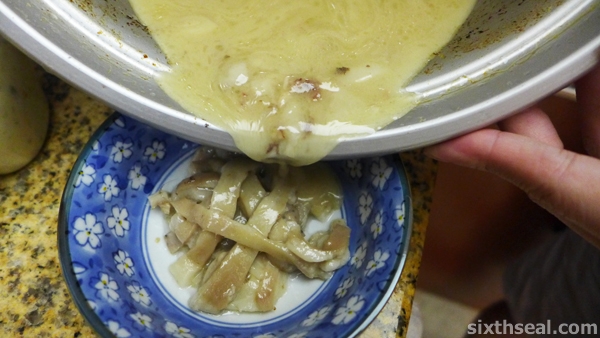 The stock is simply poured out after layering the pig skin noodles in a bowl. I also did some decorating with edible flowers – not just for aesthetics but to provide a refreshing crunch and a (semi) balanced meal. 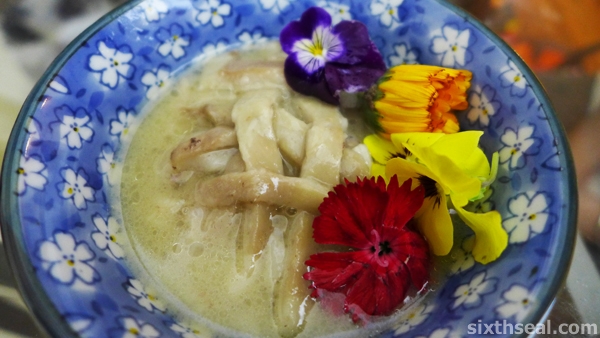 Mine was a pure pork skin noodle made out of pig skin ramen with broth from the chicken and swine stock. It was a fun and interesting cooking experiment that I’ll like to try again with consomme and a quail egg! 🙂