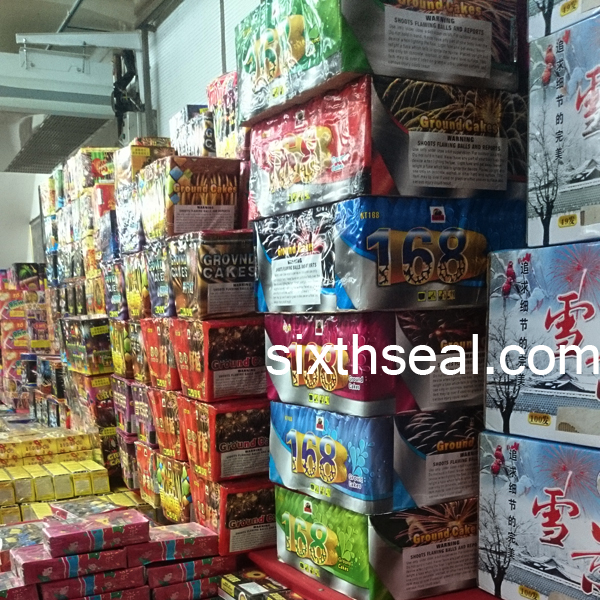 This year, I decided to get a *massive* fireworks cake instead of multiple small ones like I usually do. I thought it’ll be nice to have a ginormous fireworks cake that requires two (2) people to move and blow all of my budget on that one single glorious aerial barrage. It was already in my mind the previous year and thus I made the necessary orders to get it done. 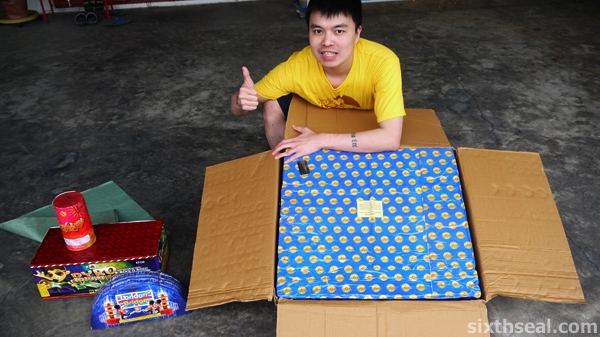 This is all that I’ve got for Chinese New Year this year – one ridiculously large custom-made 27 kg fireworks cake, one 128 shot fireworks cake and two fountains. There are no firecrackers this year in respect of my late mom’s passing. 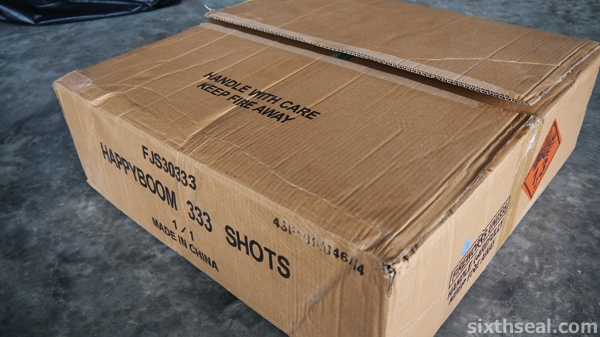 Behold! My centerpiece for this year! It’s 27 kilograms (about 60 pounds) and comes in it’s own box. 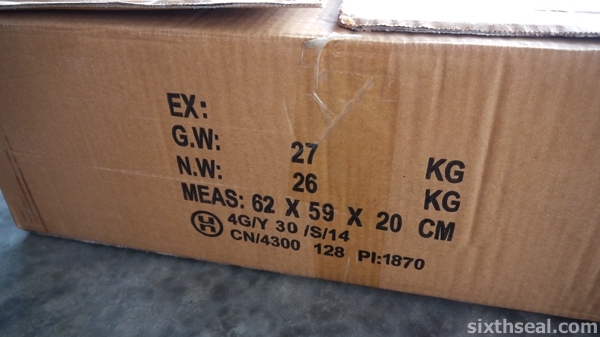 This is a custom-made display firework. It’s a divert from a licensed pyrotechnics show, which explains the 1.3G Display Grade sticker and it cost the average monthly household income around here but it’s worth it! 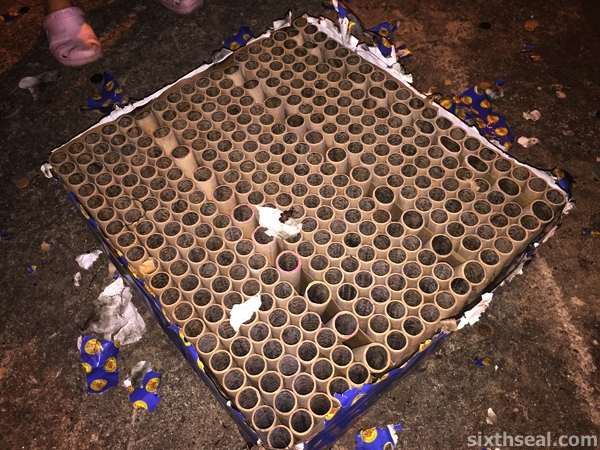 The sheer heft and dimensions dictates that two people was required to lug this monster out and all my cousins (and neighbors) came out to see it coz it’s not everyday someone gets such a huge fireworks cake. 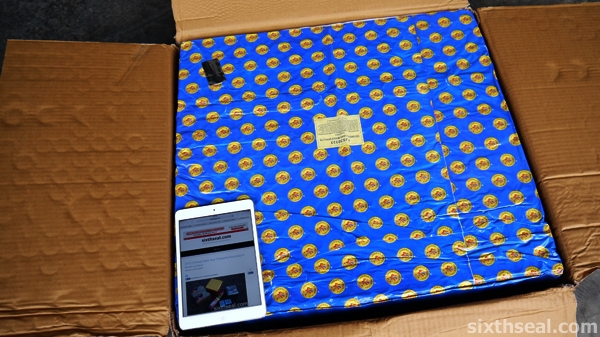 This is one of three custom orders that came in and I managed to snag one of them. Just look at the size comparison to an iPad.

It measures 62 cm x 59 cm x 20 cm and when I lit it, it produced a full four (4) minutes of glory. There’s all sorts of aerial breaks in this 333 shot cake – green, blue and red starbursts, brocada crowns, green bees, white glitter, red chrysanthemums, sparkling willows and golden palm fronds that just blankets the entire sky from the angled fanning tubes in the middle.

I accidentally pressed stop while filming coz I thought it was over but the fireworks cake was merely shifting to the finale, which is an additional 1 minute in duration. You really have to see this video – it’s an *amazing* fireworks cake, the best I’ve ever purchased and it’s well worth the money I paid for it. 🙂 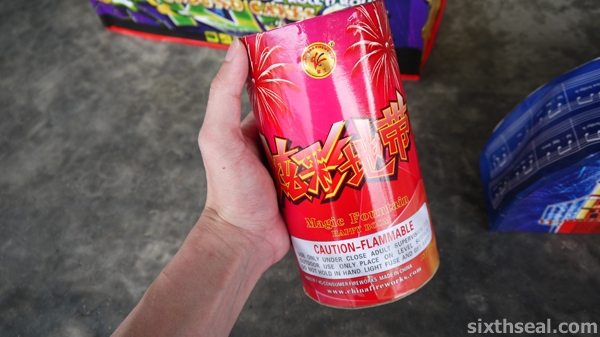 This is a gift that I got from ordering the 333 shot fireworks cake. It retails for RM 30 and it was thrown in as a thank you gift. It should be noted that Happy Boom is a very generic name for fireworks and firecrackers and it’s used to describe everything from Happy Boom novelty packets to Happy Boom salutes.

This one has small aerial bursts in addition to fountains but it malfunctioned and ended up burning to the ground. 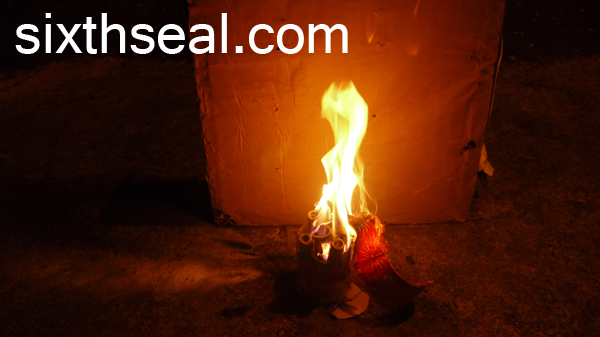 It’s not unlike the Italian Horseshoe Fireworks Fountain I got in KL – they’re prone to overheating due to the stress the gerbs are subjected to (heavy and sustained spurts instead of the lift charge that a fireworks cake produces). 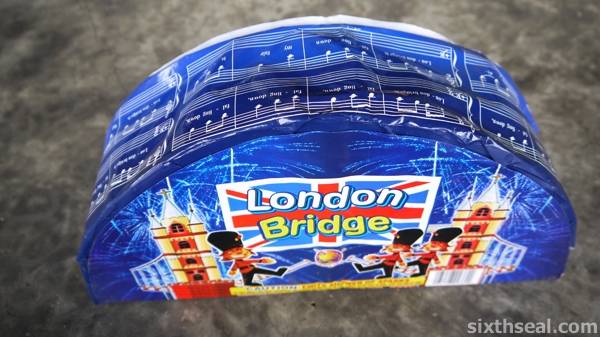 I really liked this one! It’s beautiful and I wrote about the new London Bridge firework fountain in more detail in another post. You can see the video here:

The gerbs produces bright and varied effects and the unusual colors that came out of this made this the most interesting fountain I’ve seen this year. It retailed for RM 50 but I got it for RM 30 with the bundle purchase of another fireworks cake (reviewed below). That might sound like a lot to pay for a fountain but this was really worth it due to the spectacular display! 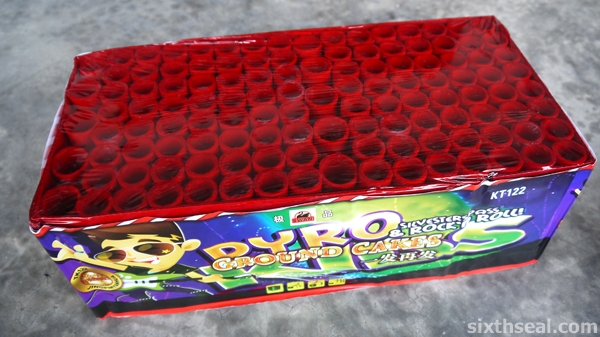 This is a Swan fireworks item which retailed for RM 120. Silvester is actually the name of a Roman Catholic holiday celebrated in Germany which coincides with New Year’s Eve. This is supposed to be a “new” cake but the catalog number (KT 122) has popped up before so I suspect it’s a re-badged KT 122 with new effects… 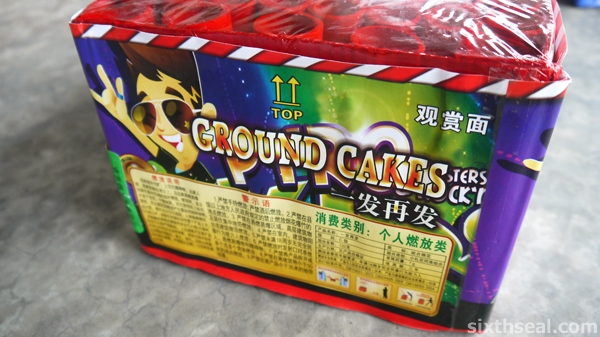 …and I was right! It wasn’t as grand as my wonderful 333 shot fireworks cake but it added bulk and entertainment for my niece and nephews who were back home for the Lunar New Year holidays and missed the 333 shot monster I let off on CNY Eve. 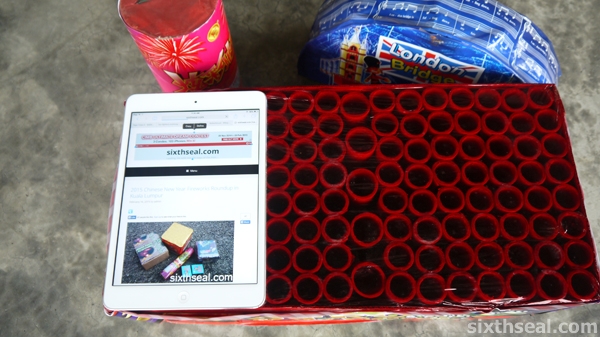 The effects of the Swan KT 122 has steadily improved over the years – this one had two series of fanned tubes to angle the aerial shells and there are some new breaks that were too expensive to be put in previous years, like the starting silent comet tail strobes (one of my favorite dramatic effects) and the crossette breaks.

This one is the best in the KT 122 series I’ve seen to date. I love the pace and the dramatic use of strobes – there are actually a lot of them in this cake, so much so that they had to skimp on the other breaks but if you love a beautiful (and not too loud) strobe cake, this would do you just fine. My niece and nephews loved it!

Hope you all had a great Chinese New Year! Enjoy the videos and Happy Chap Goh Meh everyone! 🙂