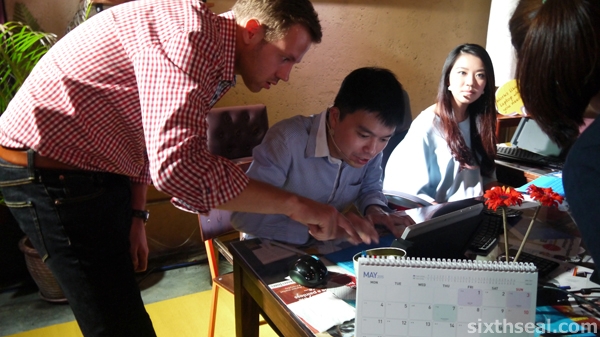 I was lucky enough to view this entire event from behind the scenes, as I was involved in the official Malaysian launch of the Surface 3 on the 5th of May 2015. There were 4 guest presenters/speakers/influencers which were part of the event that day – 2 for Home and 2 for Office. I was part of the Office group, together with Careen, my partner. 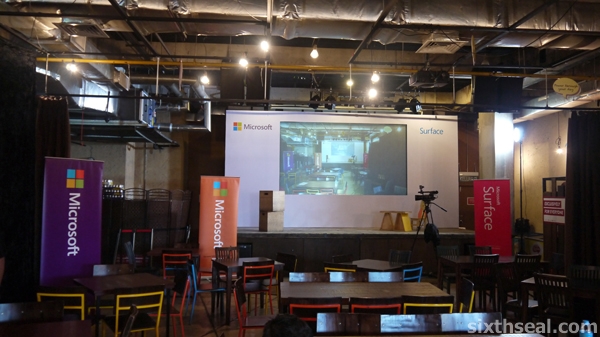 The event started off quite early for us, I was there at 7:30 am for an 8 am rehearsal led by Rukmani where we ran through everything. Good thing breakfast (and most importantly coffee) was provided. Denise actually ran out and got me an iced latte – thanks for that! 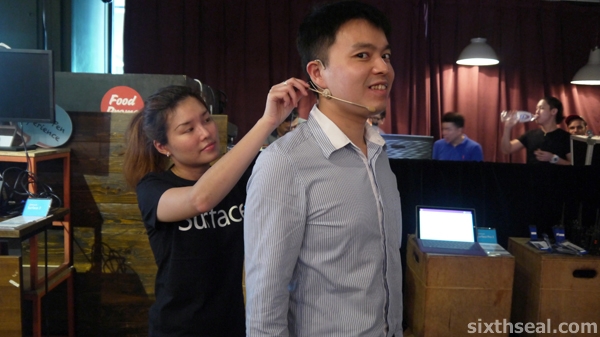 I got wired up for sound before the dry run. I’ll be talking about how the Surface 3 has helped me in my life, and do a quick run-through of the things I actually do on it. I was quite proud of that fact that I was actually doing things I would actually do during the entire event, nothing was scripted. 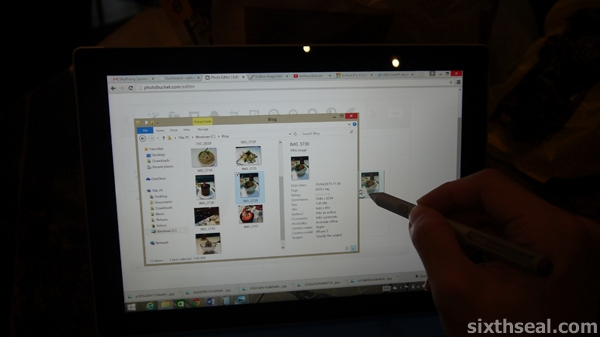 I was even replying Facebook comments at one point! I had my Surface 3 hooked up to the docking station, which allowed me to use a wireless full sized keyboard and mouse, as well as the HDMI output to Extend or Mirror the contents of my Surface 3 to the large monitor on my table. 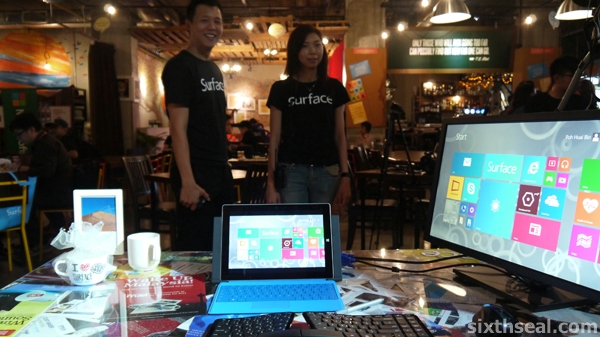 The Surface 3 Docking Station is capable of DVI/VGA/HDMI so it’s all covered there. I was a little worried that my personal account would be in full view on the large monitor they had setup for me on my table, but we were still alone at the time and the blinds were up. 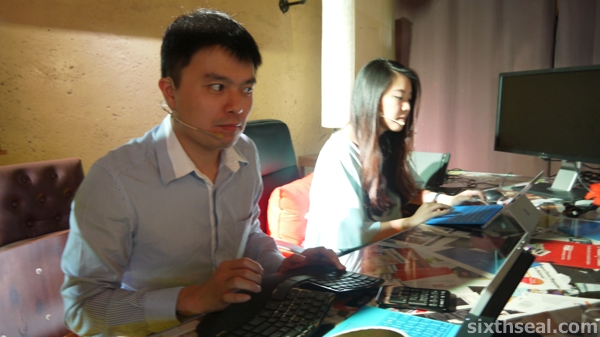 It had been decided in the previous meeting that the Home and Office sections will be flanking the stage and there will be full blinds/curtains to contain the scenes behind from prying eyes. We were slated to slip into the space and be in place at 1:50 pm latest. 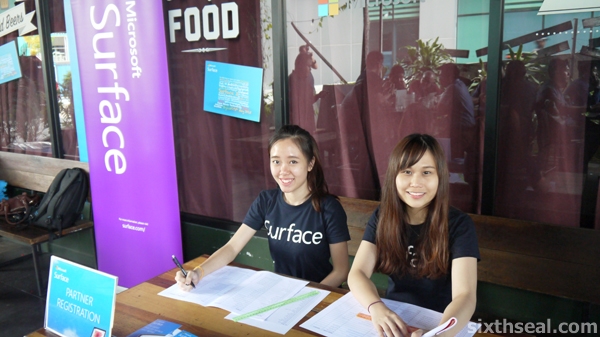 The actual Microsoft Surface 3 Launch started at 2 pm. Thus, after lunch, we went behind the curtains and waited for our cue. 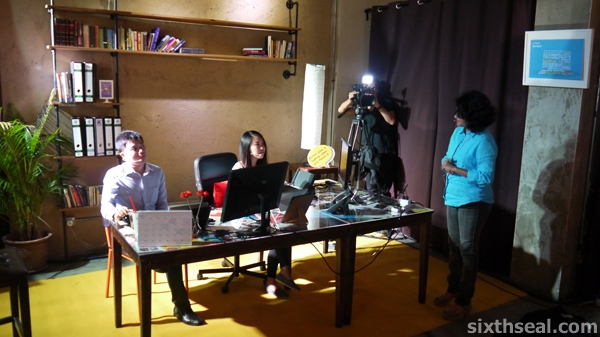 Careen was slated to talk first and then I’ll go on about the flexibility of the Surface 3 – in particular how the Surface Pen allows you to write naturally while resting your wrist/palm on the screen (a very nifty feature I love) and the 4 USB and Gigabit Ethernet ports on the docking station (useful to turn your Surface 3 into a PC). 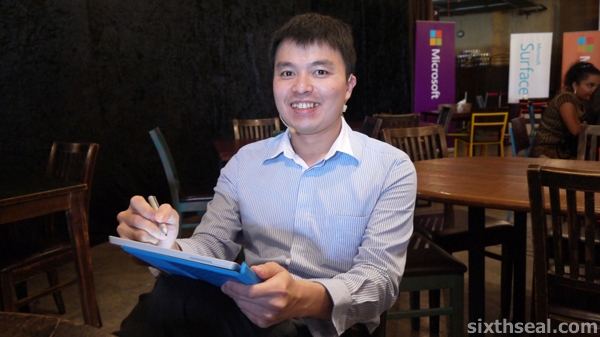 I also liked how there’s a natural place to the left of the Surface 3 docking station for your Surface Pen! It’s a magnetic side which allows you to store your stylus without losing it, a very important feature when you’re transitioning from tablet/laptop mode to full PC mode. 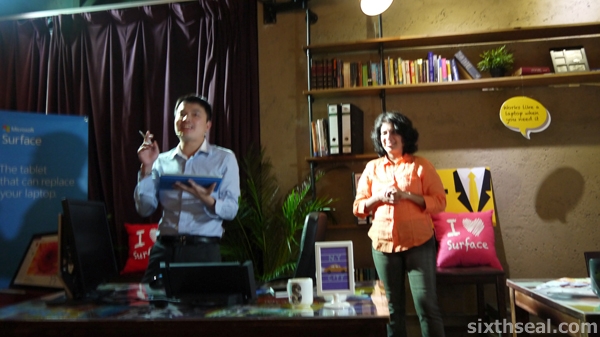 I love little design features like this that helps make your life easier. 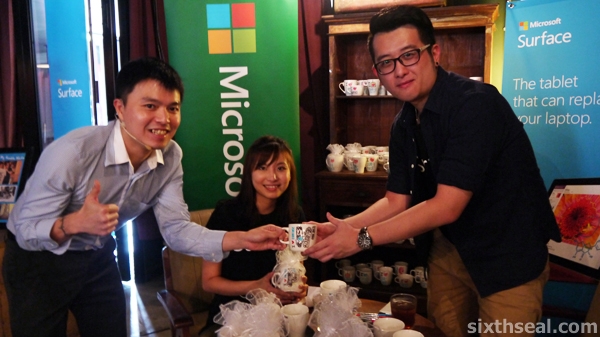 The Surface 3 launch even had a place where you can get customized mugs made with your name on it! 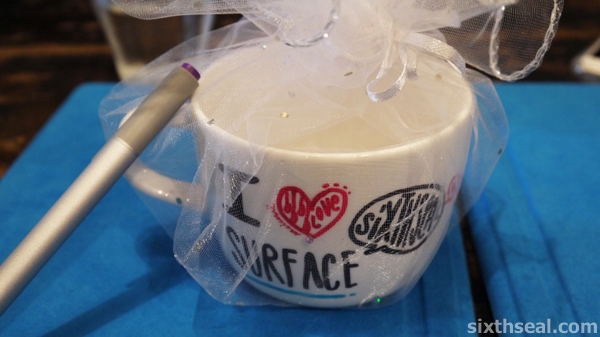 I had mine done in “sixthseal.com” and “Huai Bin” in two different cups. I asked the nice people there to do the second one only if there were leftovers and they were kind enough to oblige. 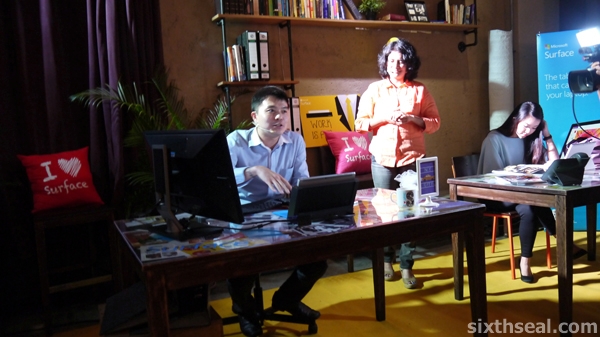 I only have photos of me that I asked my friends to take while I was on-stage (or beside the stage, rather) and it was a great experience to talk about something which I genuinely like, for I have indeed fallen in love with the Surface 3 during my time with it. 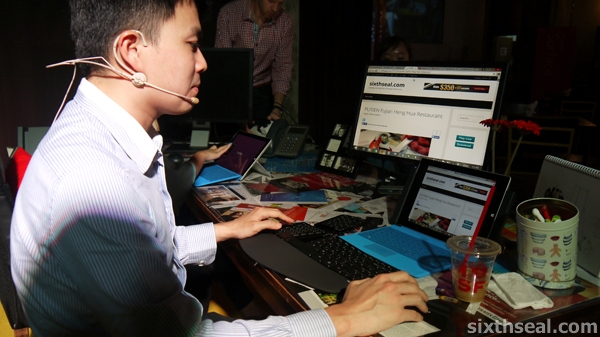 It’s so useful for work and play that I miss it when I returned the Surface 3. It’s so portable, it works like a laptop (can even run Heroes of the Storm on it), and it’s silent since the quad core Intel Atom x7 can run fan-less. 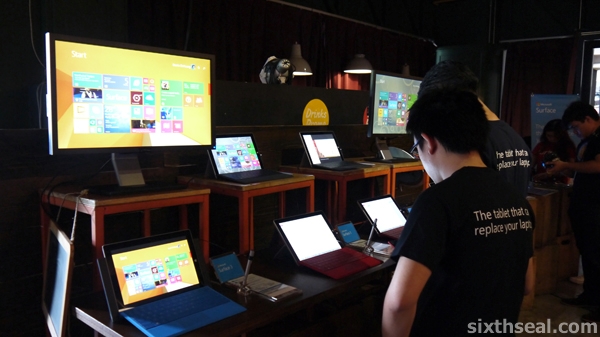 You can check out the Surface 3 at any large electronics store (saw it at Harvey Norman during the weekend) and see if you like it as much as I do. The Malaysian launch of the Surface 3 reveals the pricing to be RM 1,989 for the 64GB/2GB RAM version and RM 2,389 for the 128GB/4GB RAM version. 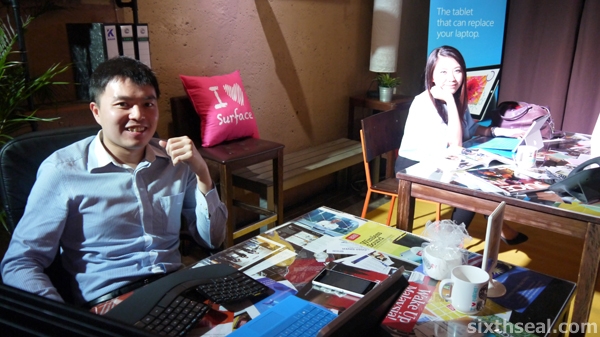 It’s out now, so you all have the chance to see what I’ve been so enamored with for the past few weeks.

6 thoughts on “Behind the Scenes: Microsoft Surface 3 Official Malaysian Launch @ The Bee, Publika”