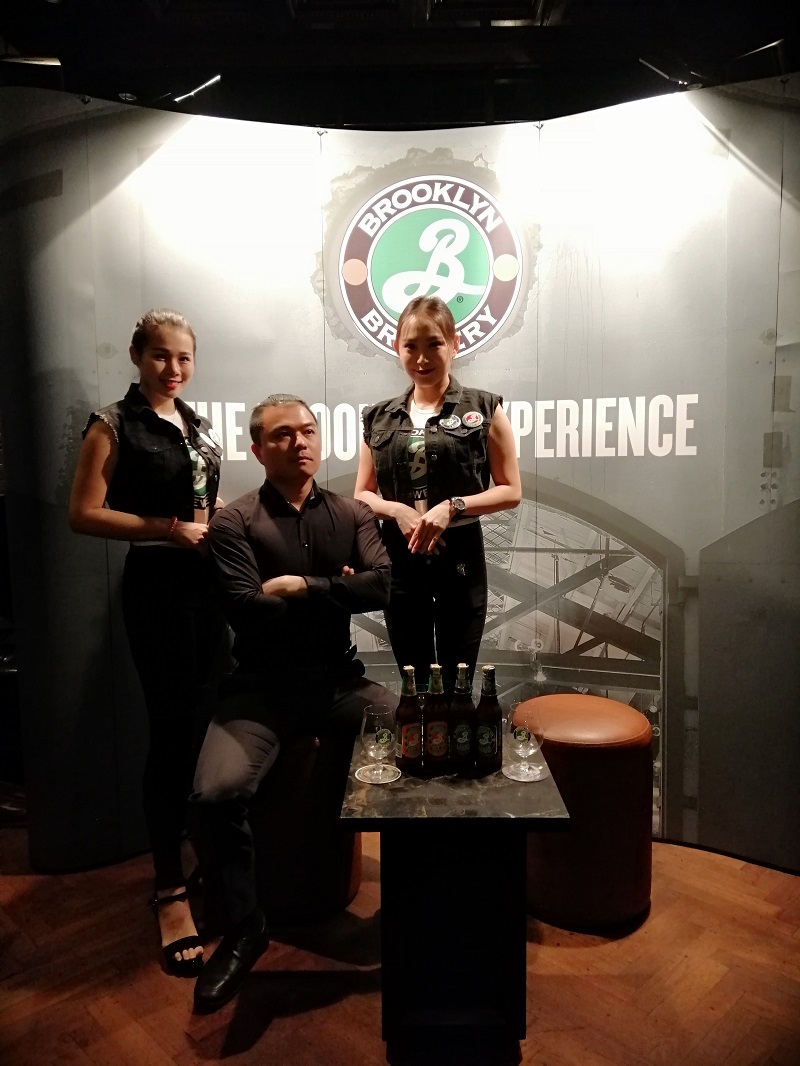 I’ve had Brooklyn Lager once before this dinner. I saw a beer I haven’t tried before in Jaya Grocer and picked it up. I thought it was a small batch import by Jaya Grocer, which they sometimes do via distributors. I almost joined one such company which imports overseas snacks and candy and sells them to people like Jaya Grocer and the airport duty free shops. In the end, I chose my current company but it’s an interesting line of work to be in. 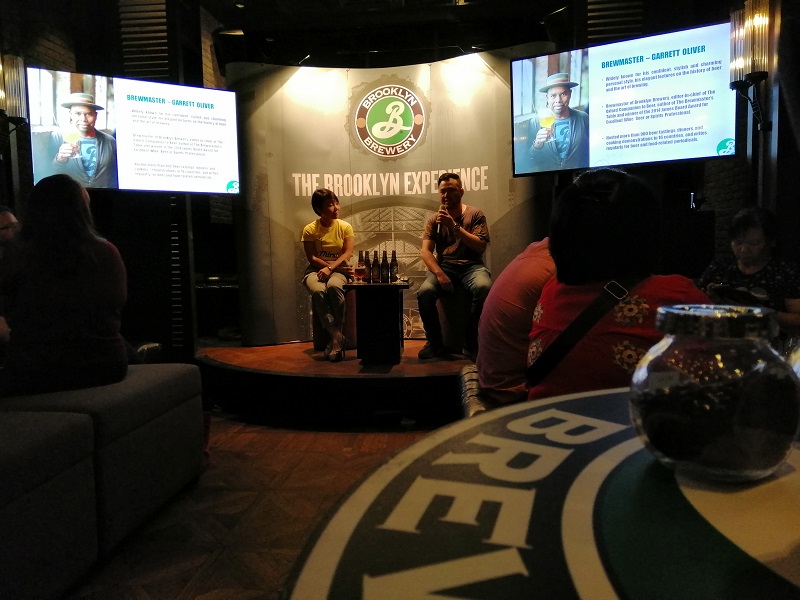 I digress. I was at The Brooklyn Experience yesterday. It’s an exclusive food and craft beer pairing session at Saro Lounge, Pavilion Elite organized by Thirst and Carlsberg. Carlsberg is the distributor of Brooklyn Beer in Malaysia. I liked the lager from Brooklyn Beer and I was keen to try the East IPA one, which is supposed to be bolder in character. 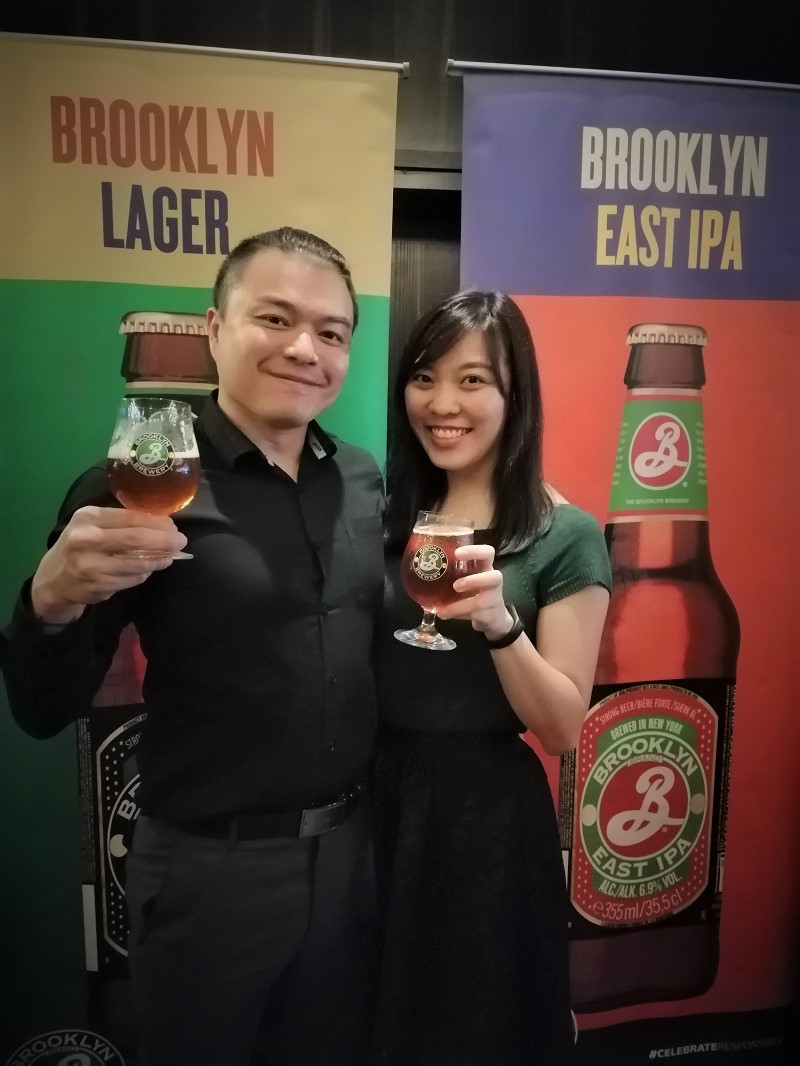 The session was fun and intimate – 4 medium tables with a diverse mix of people. I saw one filled with retirees, a younger crowd, and what looked like expatriates. There was an introduction to Brooklyn Beer (which was named as such coz it originated from that borough in New York) and a video by its founder. We also got to touch, smell and taste the grains and hops used in brewing this craft beer. 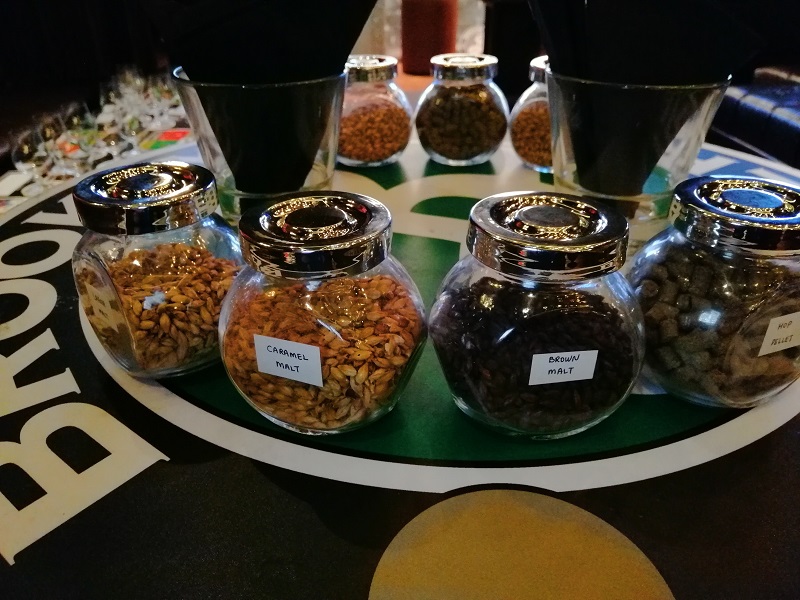 Except the hops. We were warned not to eat the hops coz it’s so bitter it’s going to ruin your palate for the night. 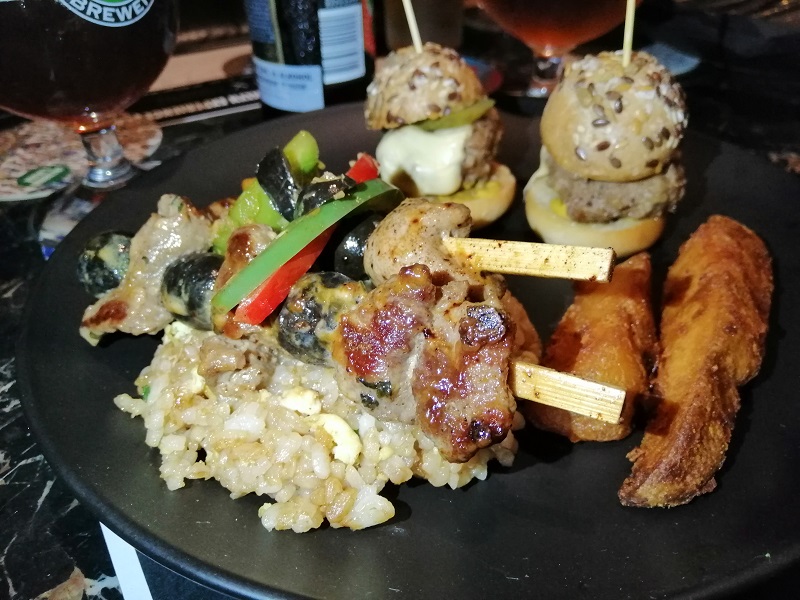 The dinner started with Mini Burgers and Fusion Lamb on Skewers and Garlic Fried Rice paired with Brooklyn Lager. I liked the slightly mochi glutenous garlic rice and the tasty NZ lamb skewers. The mini burger’s buns were a little stale. I still finished them though coz I was very hungry by this time. The strong and salty flavors go very well with the crisp, refreshing Brooklyn lager. You can’t go wrong with robust flavors and lagers, that’s why lagers pair so well with Asian food. 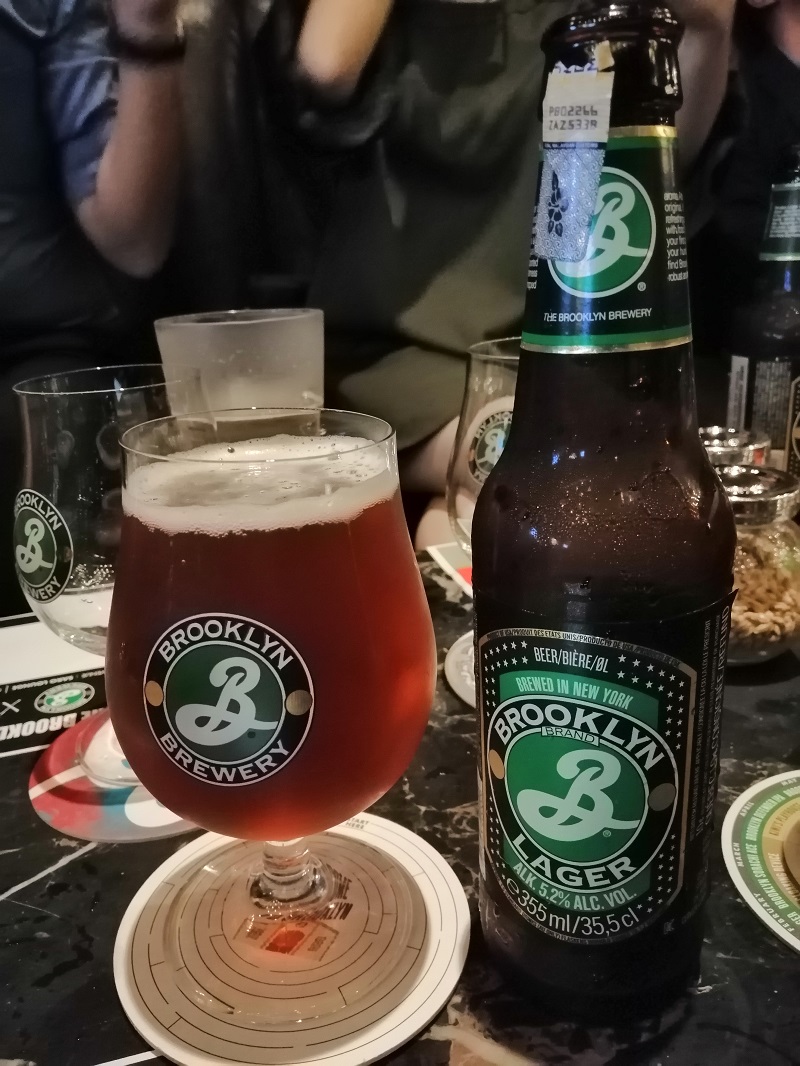 Brooklyn Lager is an American amber lager in the Vienna style. It’s 5.2% ABV and is described as having a firm malt center with a refreshingly bitter and floral hop aroma. I hear the brewing process uses something like cold brew coffee where they steep cold beer with hops after fermentation in a process called dry-hopping. 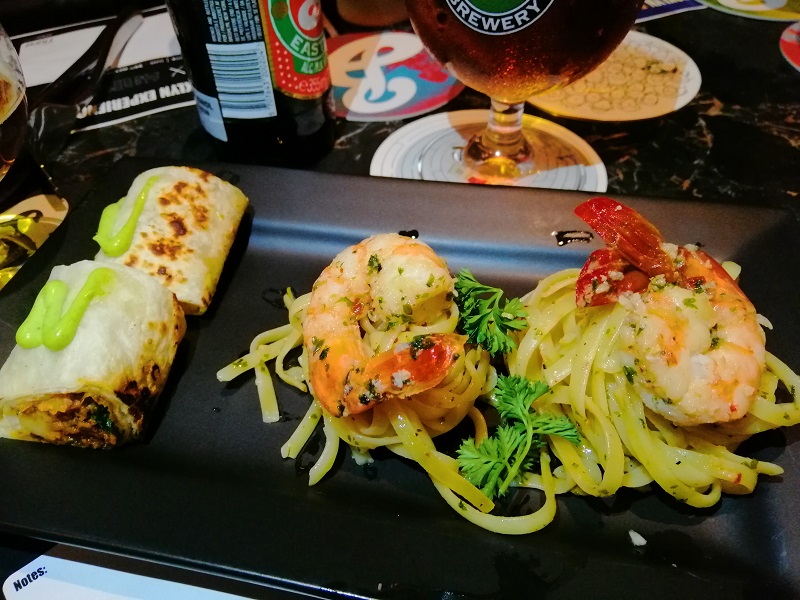 Next up is Beef Burrito and Linguine Aglio Olio with Garlic Prawns. There’s a 3rd prawn hidden under one of the mounds of pasta. I thought this was just on my plate, a friendly greeting from the chef or an accidental addition, but everyone had it. I thought that was cool. Unexpected prawns = best 🦐. It’s quite spicy, and that’s coming from me, someone who eats cili padi whole. I really enjoyed it, but it was too much for most of my table. That’s okay, more for me! Haha. The wraps were pretty good too! I thought the flavors were interesting. 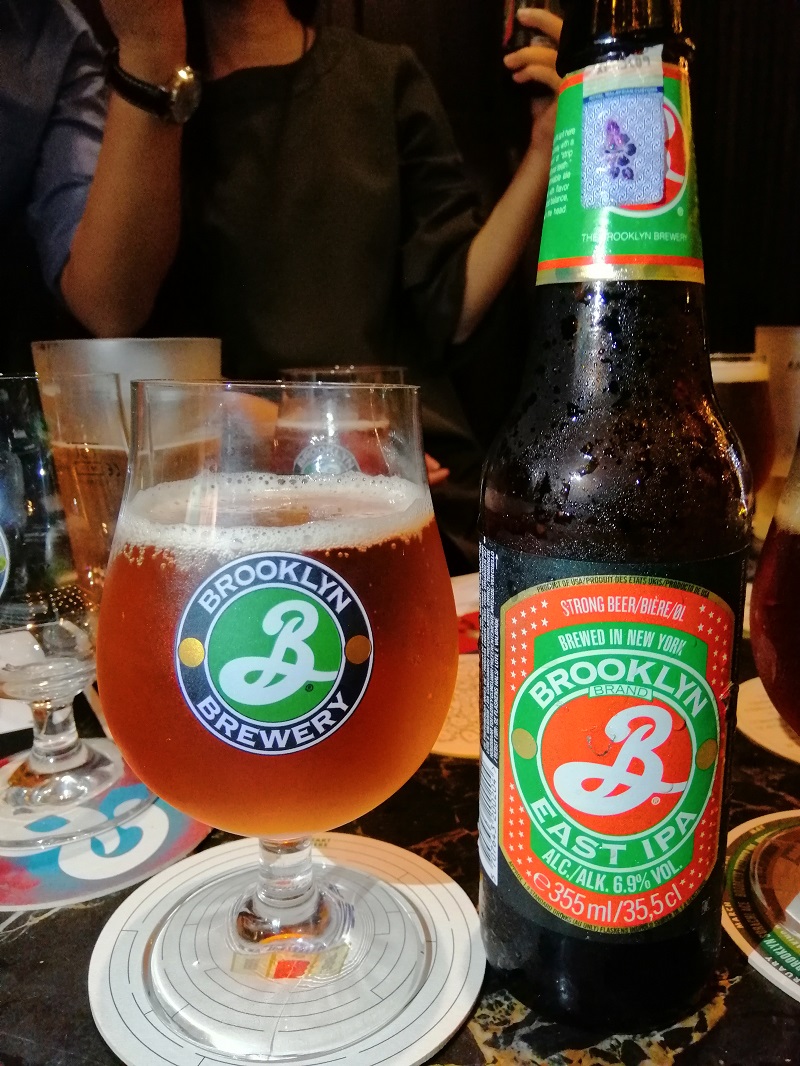 Brooklyn East IPA clocks in at a slightly higher 6.9% ABV. You need to watch out for that lest you think flirting with the pretty girl beside you is a good idea. I enjoyed this more than Brooklyn Lager coz it’s more flavorful and hoppy. There’s also a fruity aftertaste from the East Kent Goldings hops. It can be a bit bitter for people used to lagers but I enjoy IPAs, especially the maltier tasting ones like these. I hear East Coast (of USA) breweries tend to do a maltier IPA. 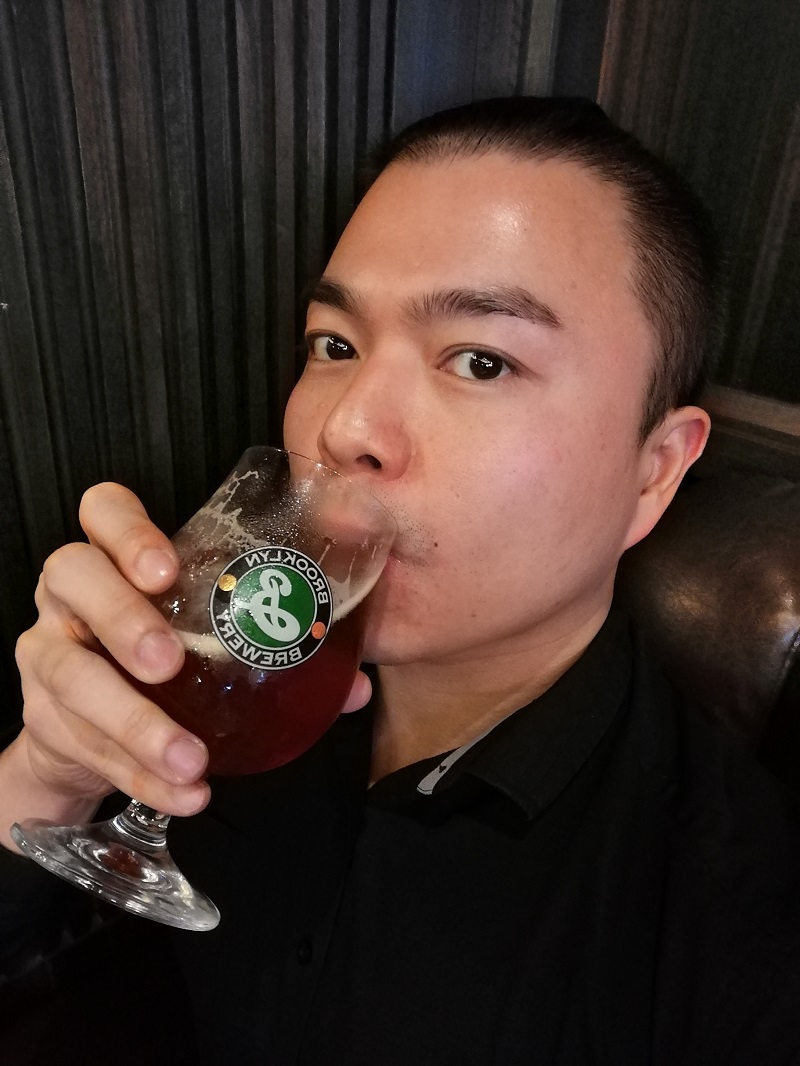 I love chill events like these where you get to eat and drink in relative peace and learn something new while you’re at it. Beer pairing is not as foreign as it sounds – many places offer it nowadays as an alternative to wine. It’s a signature of the 10-course tasting menu at 1 Michelin star Upstairs @ Mikkeler in Bangkok. The craft beer and beer pairing trends are positive ones for food and drink lovers like me. It was a thoroughly enjoyable night, although I was slightly sleepy the next day at work. 😄