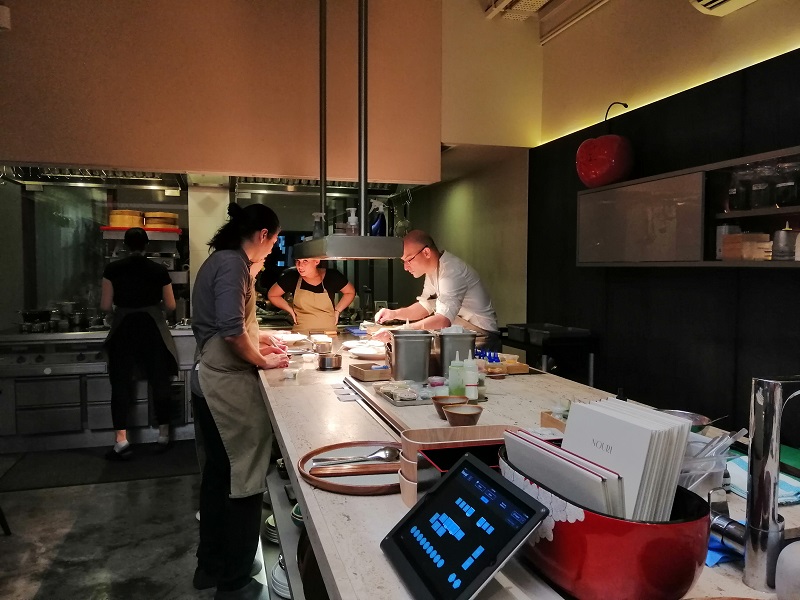 Nouri is one of the new restaurants who received their first Michelin star in the Michelin Guide Singapore 2018. I was excited to check out this place. I’ve heard nothing but good things about them. The main seating inside the restaurant is a large white marble dining table which flanks the kitchen. The chefs literally plates in front of you so you can see them working while you eat. Chef-owner Ivan Brehm was there to cook and explain the dishes to all the customers. 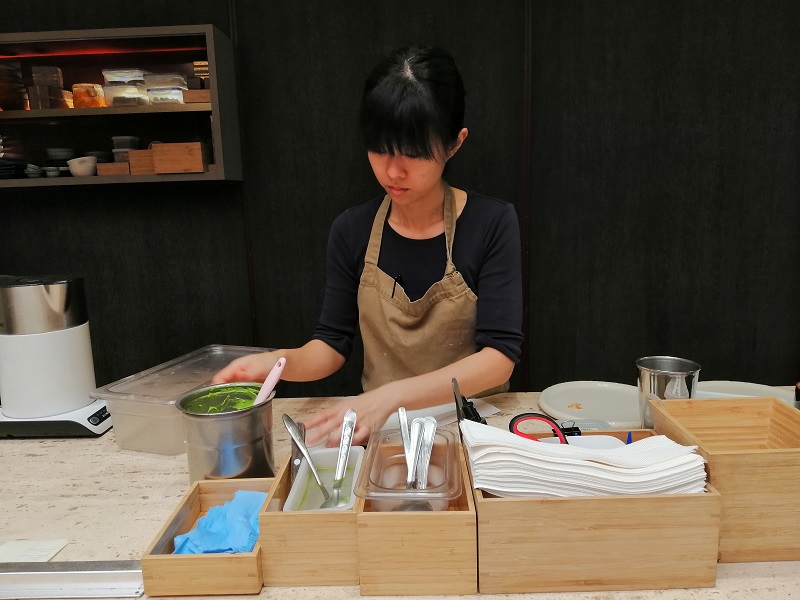 I love places like this coz I’m a total food nerd. Burnt Ends have a similar setup. The same restaurateur group is behind both. This makes the dining experience more intimate as you can see the elements that goes into your dishes and talk to the chefs while they’re preparing your food. I was here with my dad for their “Teishoku” style a la carte lunch. You choose the main (vegetable, pork or fish) you want – appetizers and desserts are included. 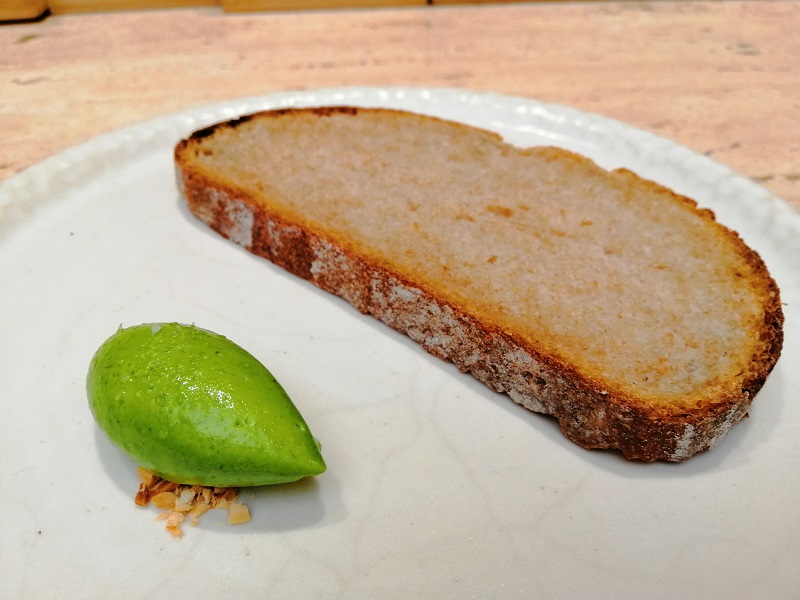 The meal started with a slice of rice sourdough bread made in-house with basil butter. The bread was warm and crusty – delicious! I like how easily the basil butter spreads. This is a minor thing but some restaurants – even Michelin starred ones – serve cold butter that’s nigh impossible to spread. Both my dad and I loved this. 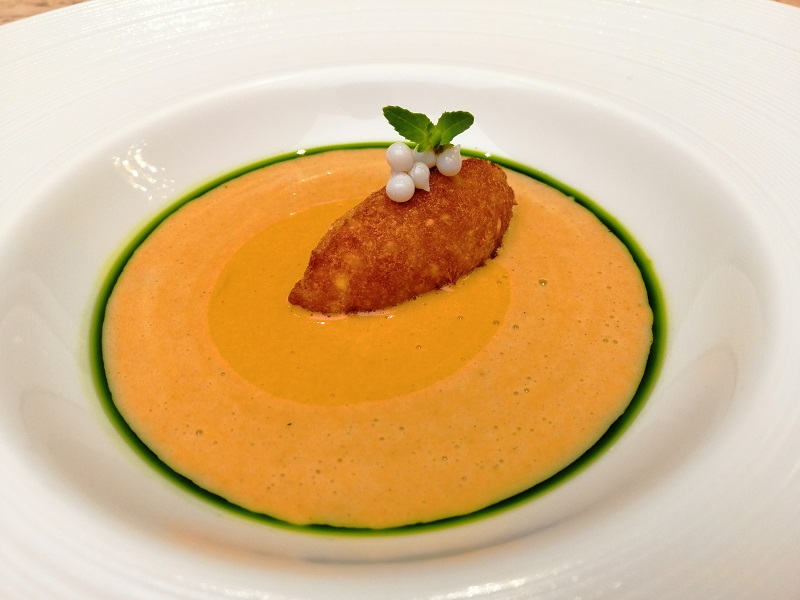 Chef-owner Ivan called this complimentary appetizer a Brazilian street snack. He explained that many people here think it’s Indian but it originates from South America. The caviar-like pearls on top are okra seeds. That’s ingenious! There’s tons of flavor in both the crispy lentil filled bite and the exquisitely nuanced frothy base with oil. It’s so yummy my dad couldn’t hide his approval. 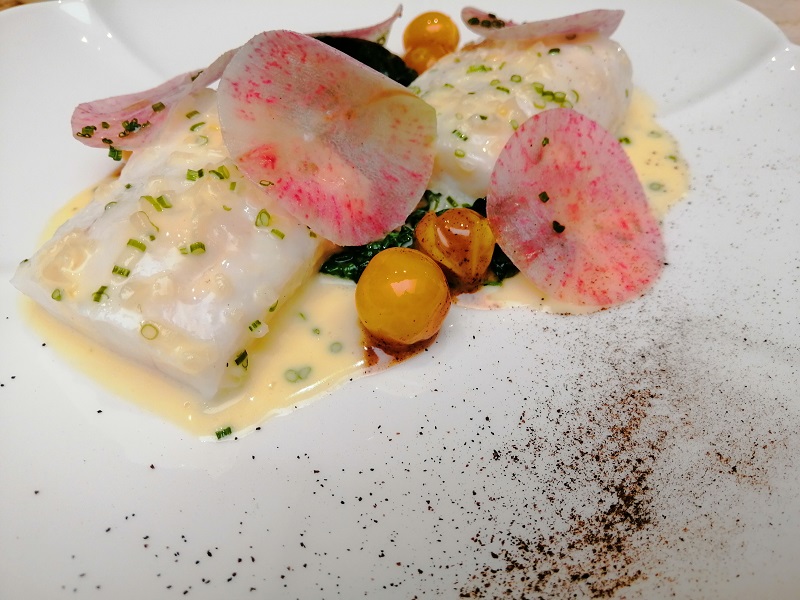 I went for the Seafood (SGD 44) which is described as locally caught parrotfish, physallis beurre blanc, watermelon radish salad, red vein sorrel. There are 4 side dishes included with every main. I’ll explain them later. The grouper was mild tasting, but the Cape gooseberries adds a nice acidity to the dish. The creamy sauce was excellent. It’s overall a more subdued main dish with clean flavors. 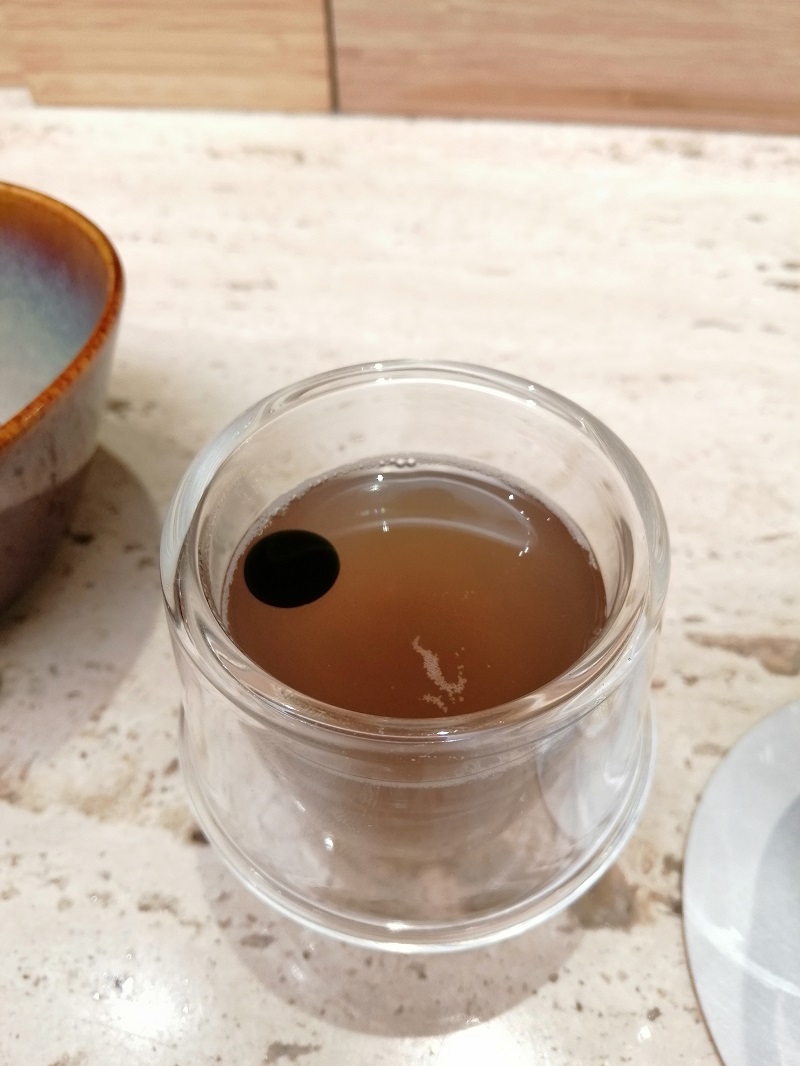 Vegetable “restaurant” broth. This simple sounding side dish is made of 7 different types of organic vegetables. It’s served hot in a double walled shot glass you can pick up and slurp. I really enjoyed the intense and varied flavors within, as did my dad. He was very impressed. 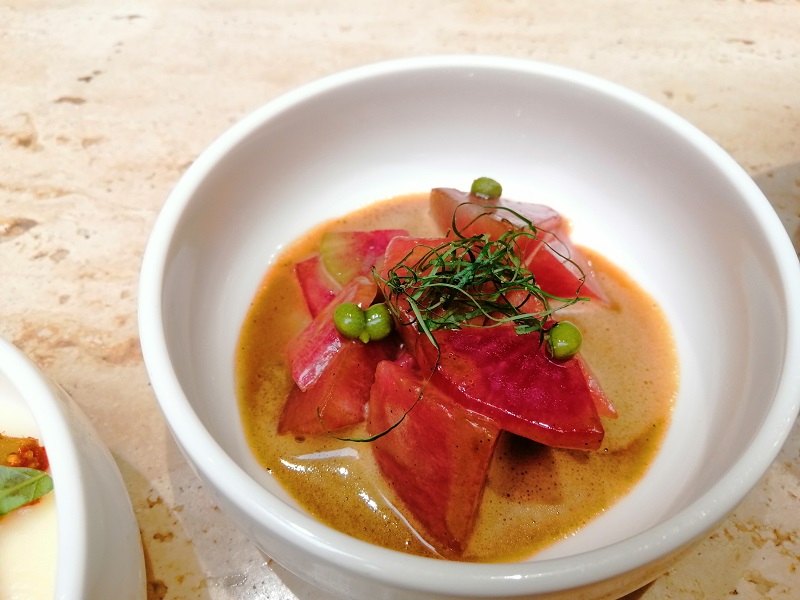 Organic watermelon radish with black pepper sauce had dashi jelly, Tahitian vanilla and wild whole green pepper mixed in. I thought that was very interesting. It’s an unusual flavor combination but I like it. 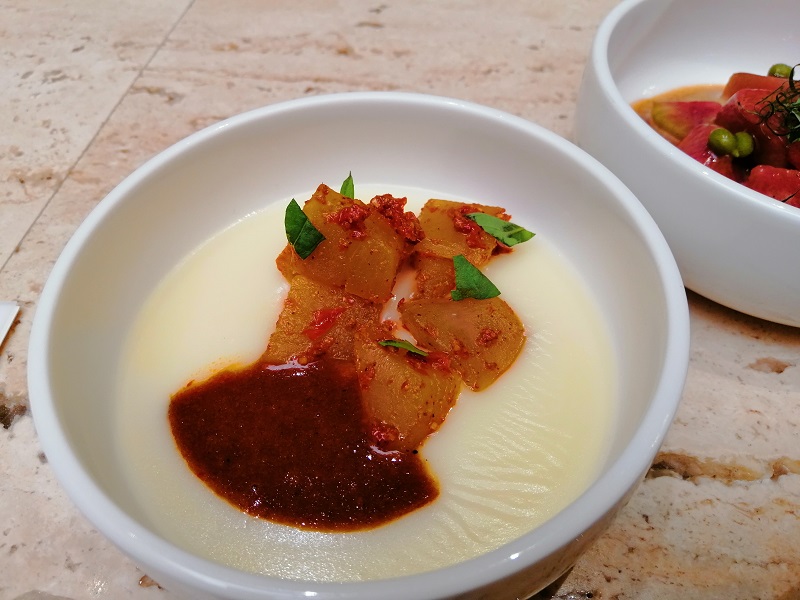 Yacon and tapioca with sambal ikan bilis and red chilli achaar. This small side dish is absolutely packed with flavor! The anchovy sauce is so intense tasting. It goes very well with the creamy element and milder tasting tapioca. Excellent combination. My dad liked this a lot. 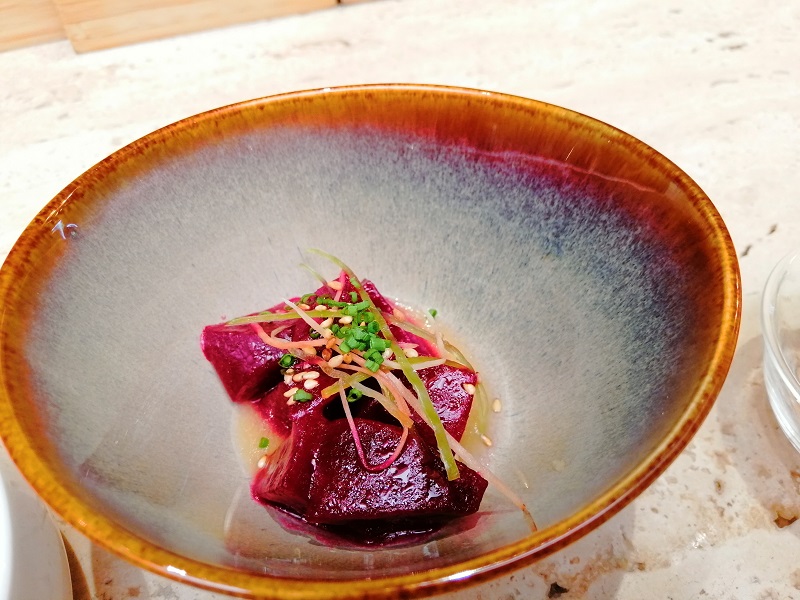 Snow pea and beetroot salad with fermented tamarillo dressing was done competently but the light flavors made this more of a palate cleanser. Nothing wrong with that, the different intensities in flavor help balance things out. 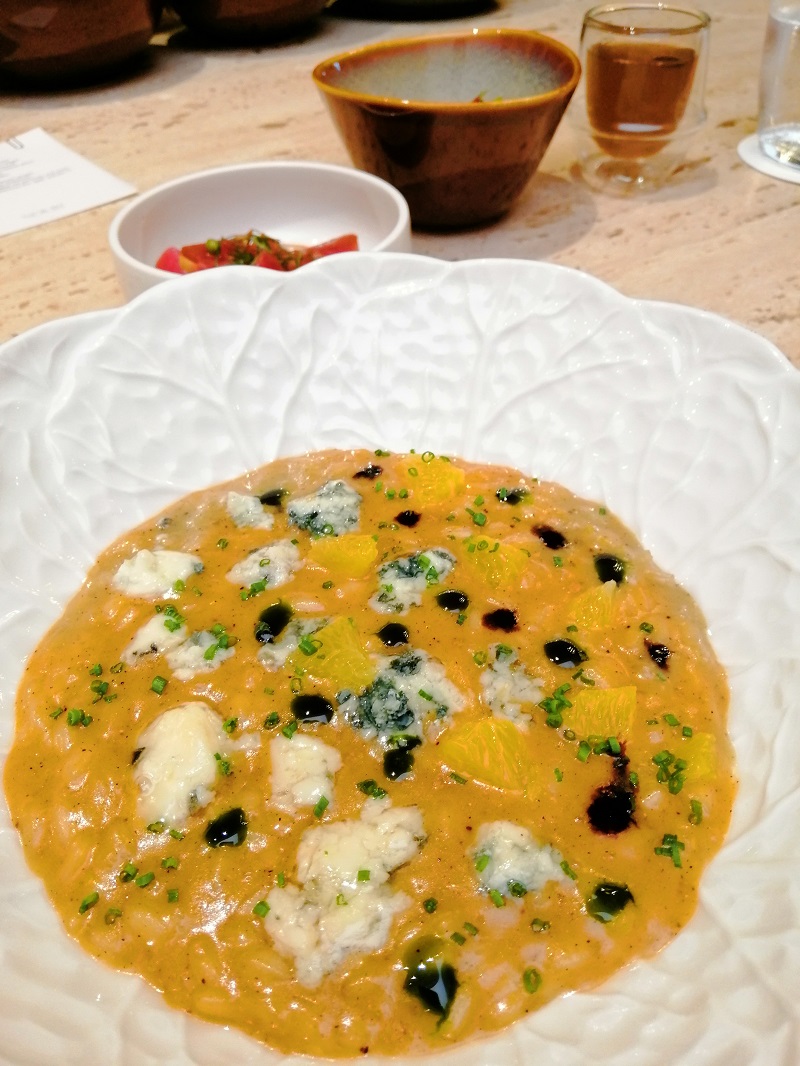 My dad went for the Vegetable (SGD 32) which was described as 48 hour caramelized orange, aged carnaroli rice, roasted yacon, Carles Roquefort. Roquefort Carles is a famous unpasteurized artisan blue cheese. It was intense! So rich and complex. We both loved it! There’s bits of orange fruit to cut through the strong flavors sprinkled on the dish. We both enjoyed this tremendously. The carnaroli rice is very different from our rice – each grain is distinct and firm. Very well executed. 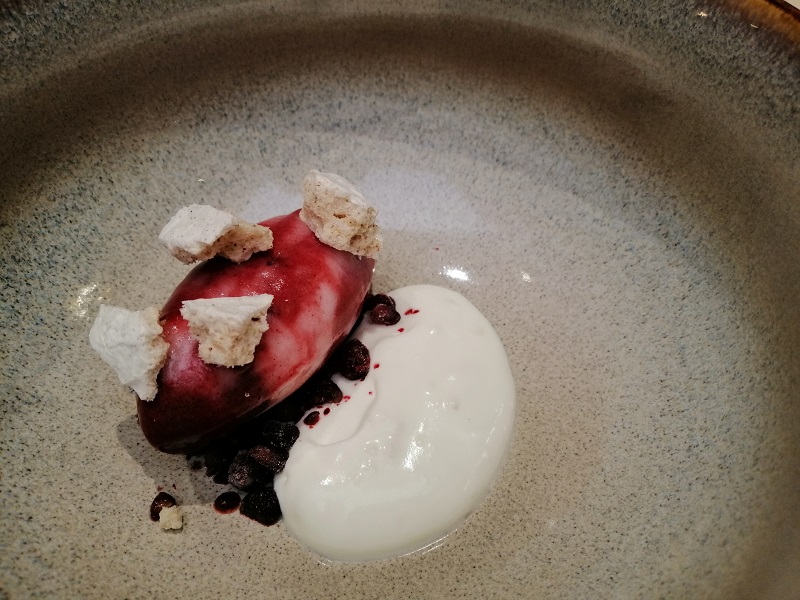 Dessert was pickled lemon and cranberry ice cream with clove and creme fraiche. This was a sublime end to our lunch. The bright, acidic flavors of the ice cream finished the meal on a delightful note. I always feel acidic desserts work better than chocolate ones. My dad, not being a big dessert fan, finished everything on his plate. That’s how splendid it was. 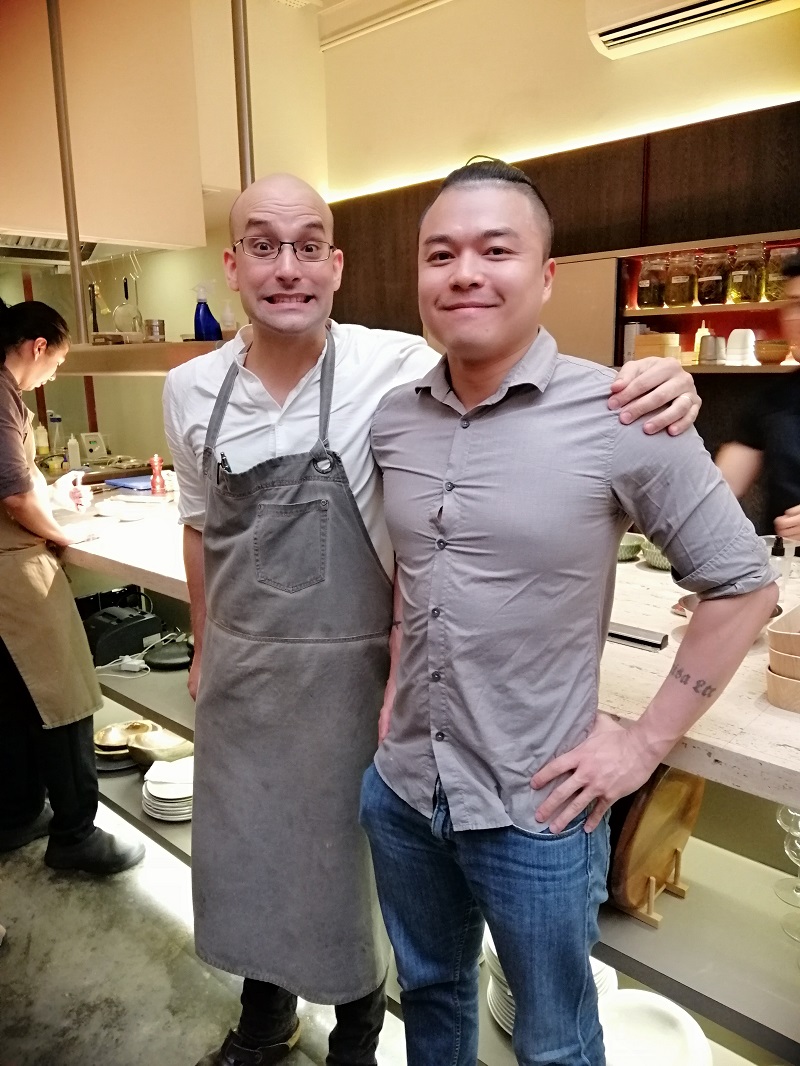 The service at Nouri was extremely good. All the waiters and chefs were very friendly and attentive. I dropped my napkin and they promptly changed it. Chef-owner Iven Brehm came over to introduce every dish and served us personally, which was an excellent touch. One of them remembered I wanted to take a photo with Chef Ivan and prompted me as we were about to leave. The prices for lunch was very reasonable too! We spent SGD 102 (RM 310) in total. There’s a SGD 5 charge per pax for their water but I don’t mind it at all. I’ll definitely be back for dinner! I feel Nouri has great potential to move to 2 Michelin stars in the future. 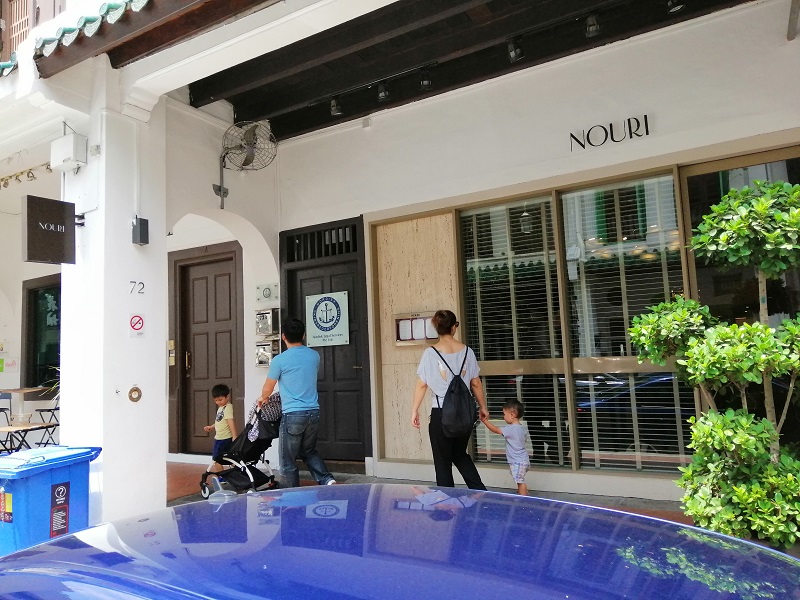