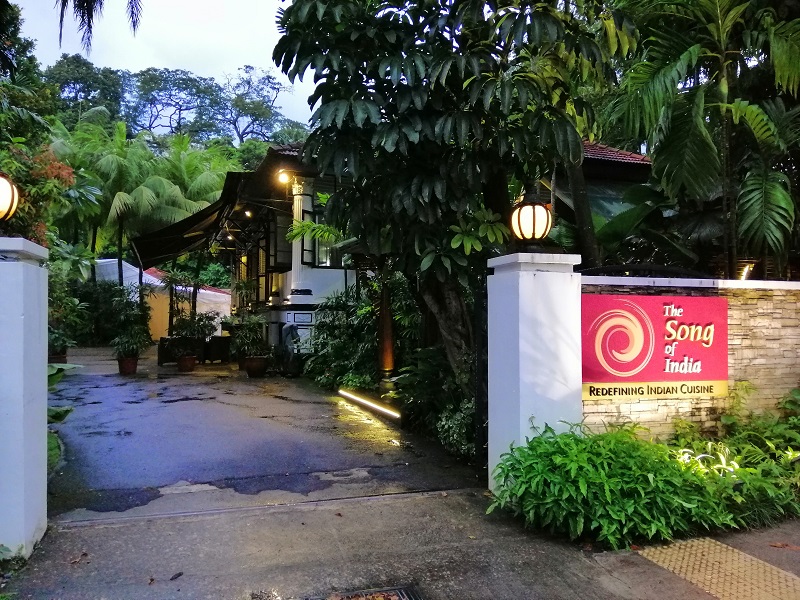 I was in Singapore over the Deepavali holidays and made a last-minute decision to check out 1 Michelin star The Song of India’s Deepavali Set Dinner. I thought it would be apt to have a specially curated Indian meal in light of the season. I was wrong. Except for a few bright spots, the meal was very mediocre. There were lots of executional errors like food being served cold. Not slightly warm a la fine dining or room temperature. Cold, like the curries in a run-down mamak who didn’t turn on the bain marie as a cost cutting measure. 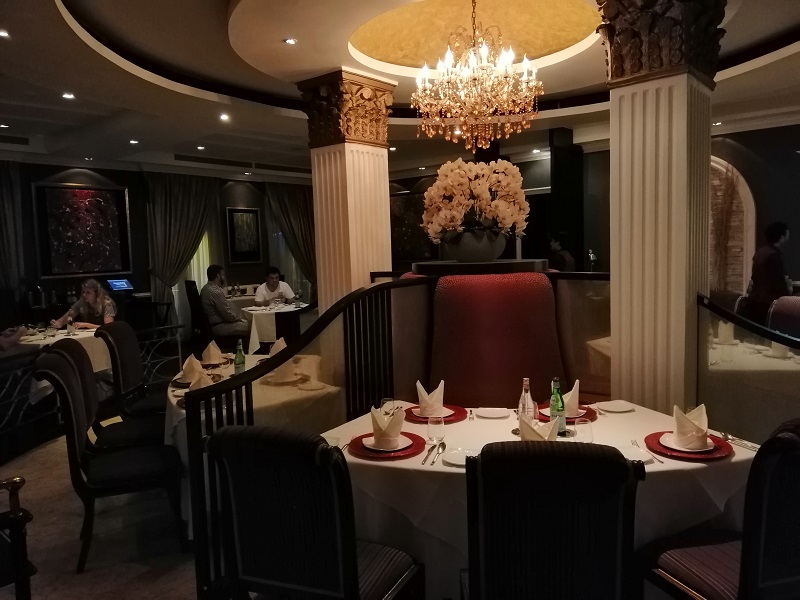 Dinner started inauspiciously when the front counter couldn’t find my reservation. I showed them an email from The Song of India confirming my booking and the lady went to ask a supervisor before seating me. It’s of ill portent that the dining room only had 2 other tables occupied. I could have gotten a table just by walking in. The restaurant looked very beautiful though. 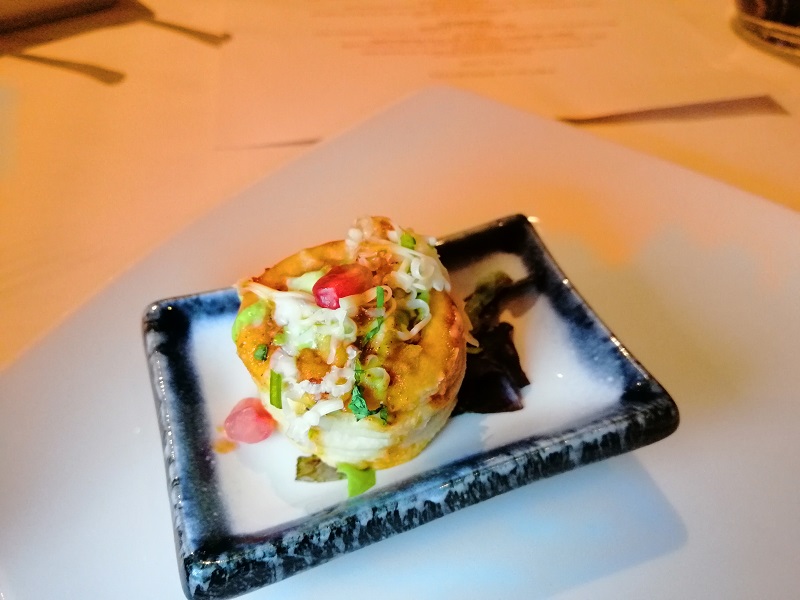 The Song of India’s Deepavali 2018 Set Menu cost SGD 79++ and started with a complimentary amuse bouche described as a walnut. I couldn’t tell you what the flavors were coz they were entirely forgettable. I must add that I wrote notes on the food and there was a blank spot after walnut. I couldn’t find anything positive to say. 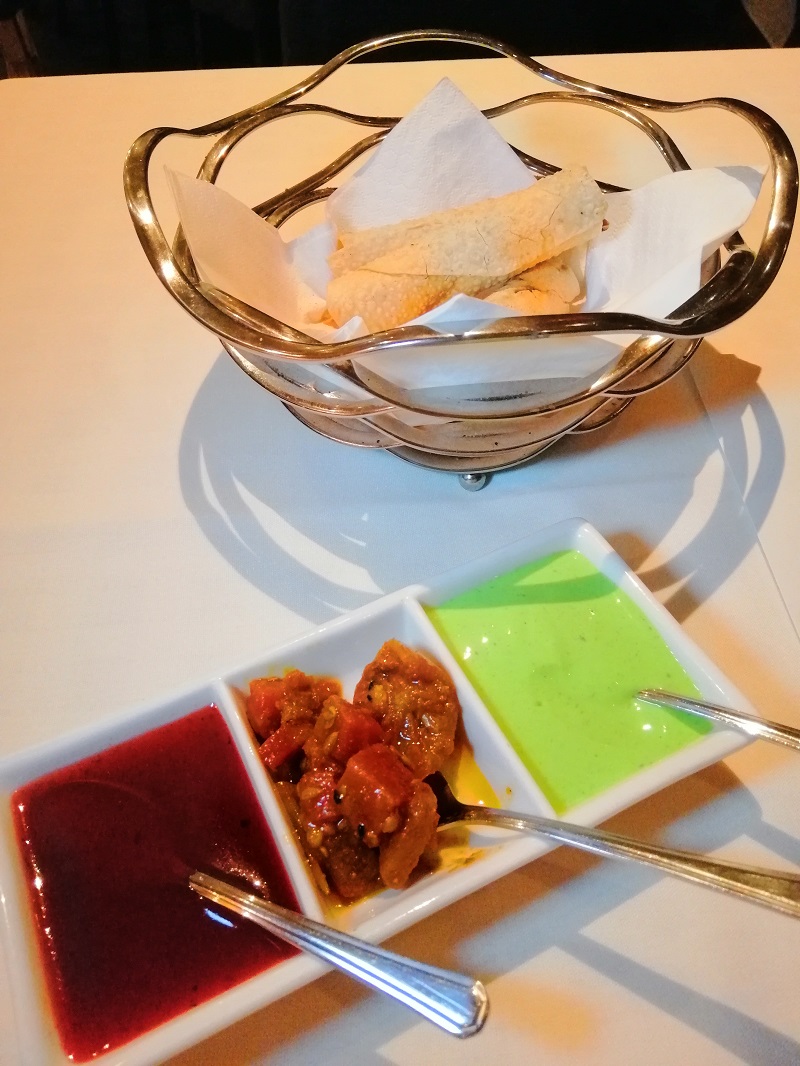 Roasted papadoms came next with mint sauce, mango tamarind sauce and pickled mixed vegetables. The papadoms were rolled up and crunchy but I found it hard to dip it into the sauce. I could taste salt and not much else. Mint sauce was meh. Pickled vegetables was overpowered by sour notes. The mango tamarind sauce was very nice but I suspect a lot of that has to do with my love for sweet things. 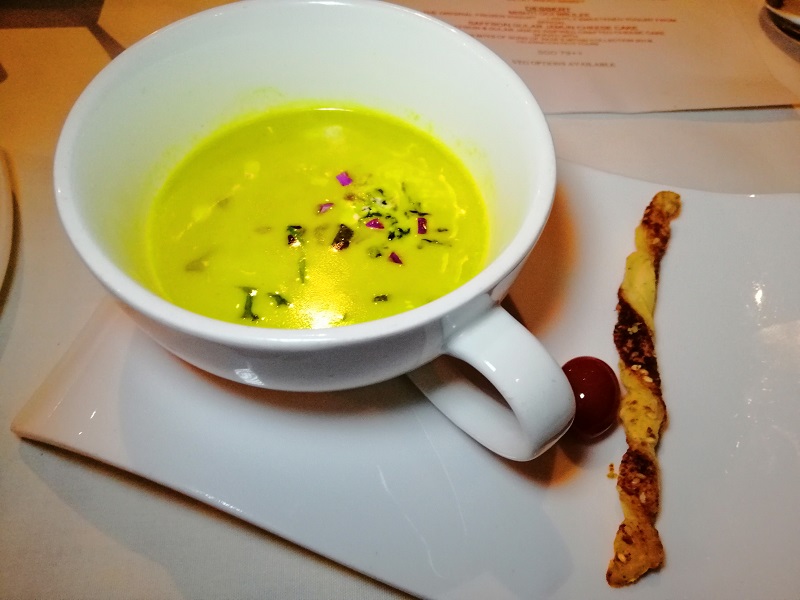 Nagaland Bamboo Shoot Soup. Young bamboo shoot infused broth sprinkled with edible flowers and herbs. This soup tasted hearty and creamy but it was merely decent, not delicious. There’s lots of flavor from the unique herbs and the rolled up piece of crispy bread tasted like a croissant. I’m not sure what the unadorned grape tomato is there for though – palate cleanser after the soup? Puzzling. 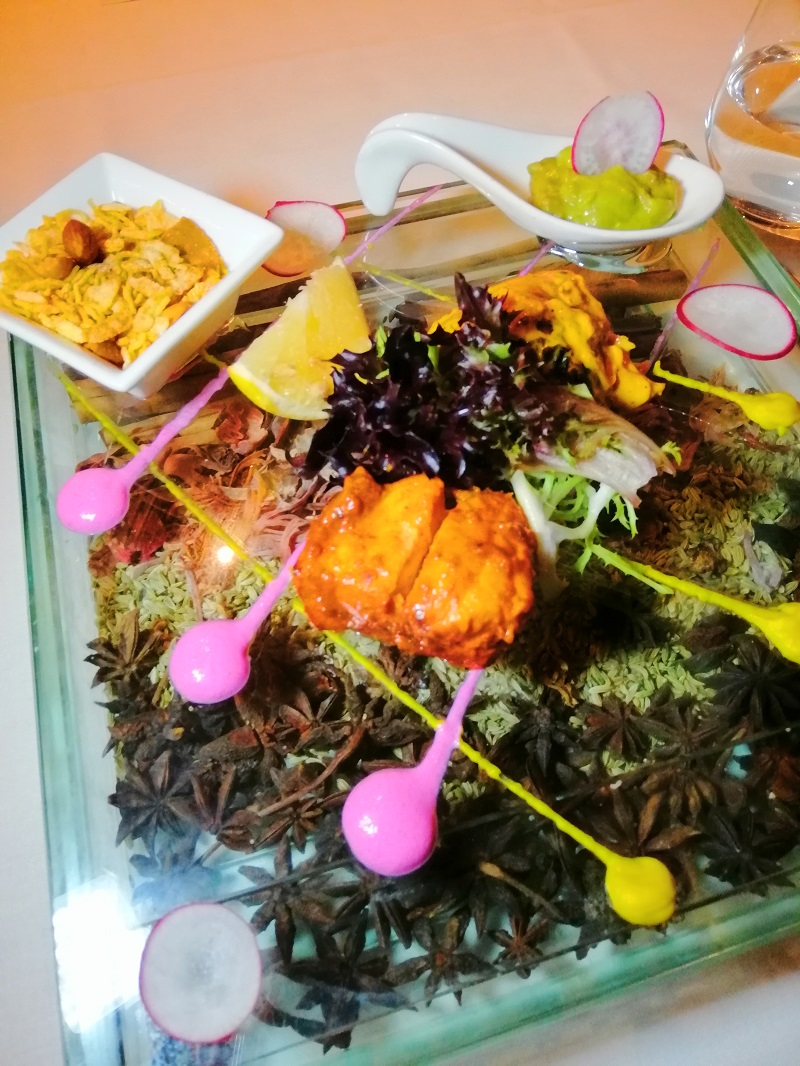 Chargrilled Laksa Flavored Chicken Kebab and Sambal Barramundi Tikka served with traditional Deepavali savories as the starter. This was a confusing creation of cold chicken and overcooked fish with random splashes of neon pink and yellow sauce. I think the sauces were colored just to look Instagrammable and the design of the 2-inch-high “plate” with bits of foliage inside prioritized looking good over practicality. There was a side of Indian dried nuts with murukku, avocado and pickle sauce. I liked the taste of the creamy avocado sauce but I found the proteins on this plate dry and unappetizing.

I waited more than 45 minutes between my starter and main. That’s a ludicrous amount of time considering there were not many customers. I suspect this was why a lot of my main dishes were cold. Perhaps my waiter forgot my order while he fussed with a large group that just came in. I had to prompt him about it, and my empty water glasses required multiple requests to be topped up. 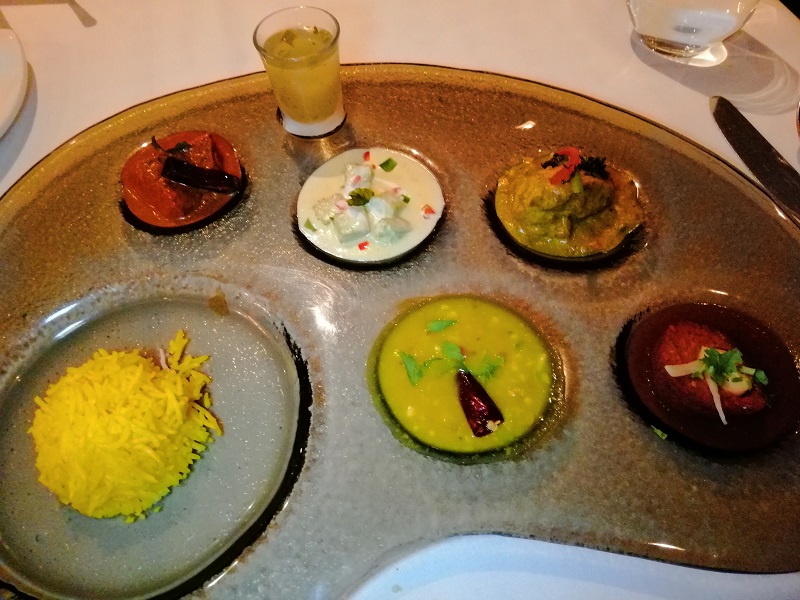 Deepavali Song’s Art Palette. Coorg Mangalorian Fish Curry. Country Style Bihari Chicken Curry. Nargisi Quail Egg Kofta. Spinach Kasundi. Amti Dhal. Saffron Goli Pulao. Aam Ka Panna. The last one was a roasted raw mango shot that’s quite good. Unfortunately, all the dishes in the main were cold when it arrived. The saffron pulao was near inedible when stone cold. I contemplated sending it back but didn’t relish another 45-minute wait so I just ate it. The taste of the lamb and fish curry was good despite being cold. I also liked the paneer with the naan bread. Speaking of which, that was what saved the meal – a basket of hot naan bread came with the mains and helped raise the general temperature of the food when mixed together. 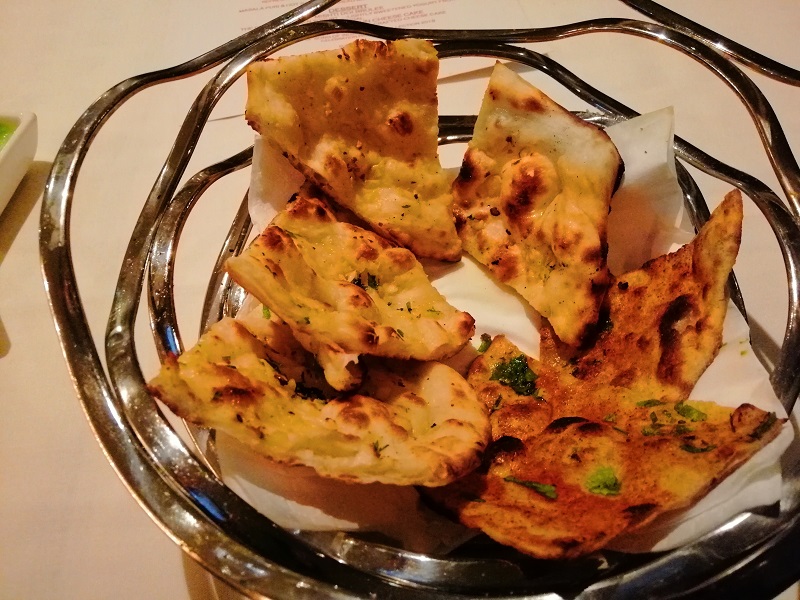 I really enjoyed the naan bread here. OMG! They’re delicious! Fresh from the tandoor oven and piping hot. The flavors are amazing! I don’t know what herbs they use inside but it’s so good I’m half tempted to come back just for the naan despite their other shortcomings. There are two kinds – Rajasthani Jowar great millet naan was my favorite. So yums. It’s seriously mindblowing. I’ve never eaten better naan in my entire life. They go especially well with the paneer. I also found the taste of the quail egg kofta nice. Too bad it’s rubbery and cold. 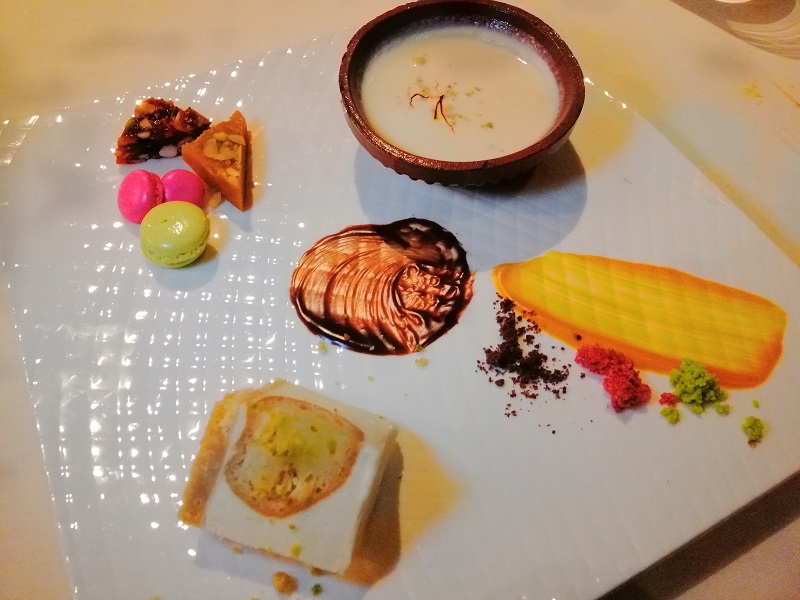 Dessert was Mishti Doi Brulee (lightly sweetened frozen yoghurt from Bengal), Saffron Gulab Jamun Cheese Cake and mini bites of The Song of India’s Mithai Collection 2018. I enjoyed the creamy and slightly sour frozen yoghurt. I also love the gulab jamon cheesecake. That’s seriously brilliant. It’s a gulab jamon (saffron sugar water soaked ball) inside a cheesecake. It looks good, but more importantly, tasted wonderful. It’s cray cray! However, the special Deepavali sweets were a disappointment. I’m staggered to see them selling these Deepavali sweets. I wonder who buys them coz all I taste is sugar and not much else. It’s very one dimensional, but the other dessert elements were perfect. 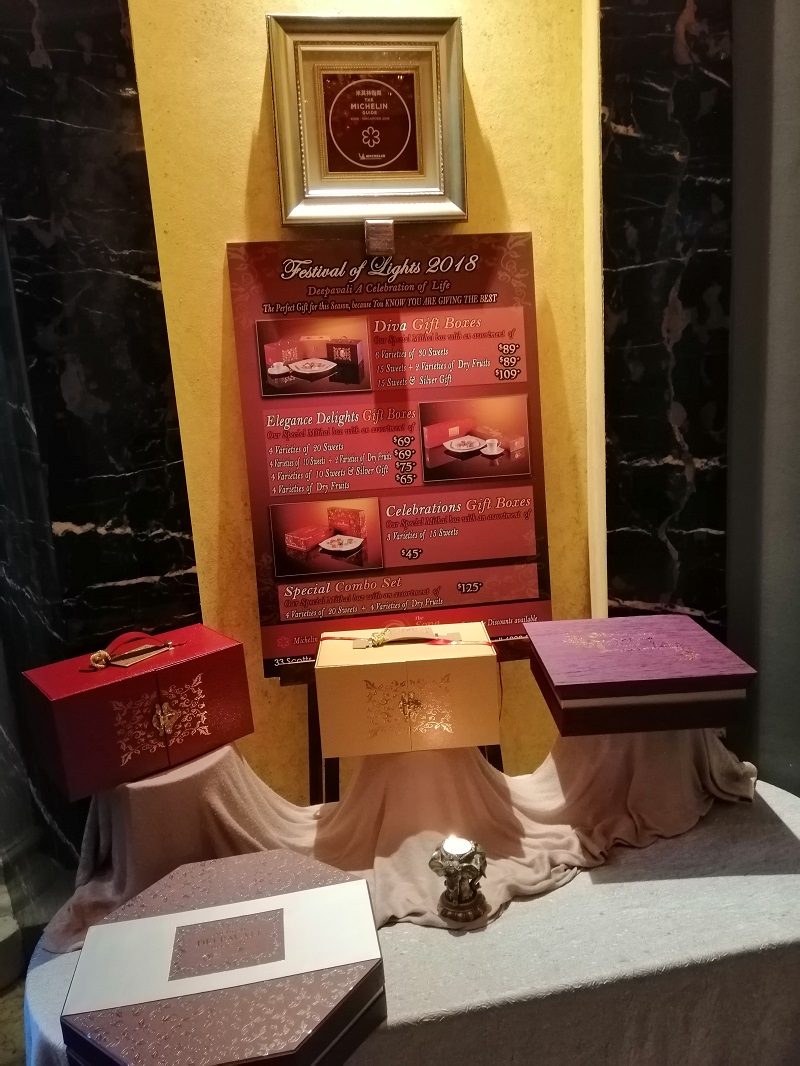 My problem with The Song of India was due to the overly friendly waiter. He constantly strove to make small talk about inane things until I had to ask him to stop. This exhibits a lack of what the Japanese call mindfulness i.e. being aware of cues and body language to discern that I didn’t want to talk. I was busy writing notes about my dinner and taking photos. He struck up random conversations even after I told him I needed time alone! 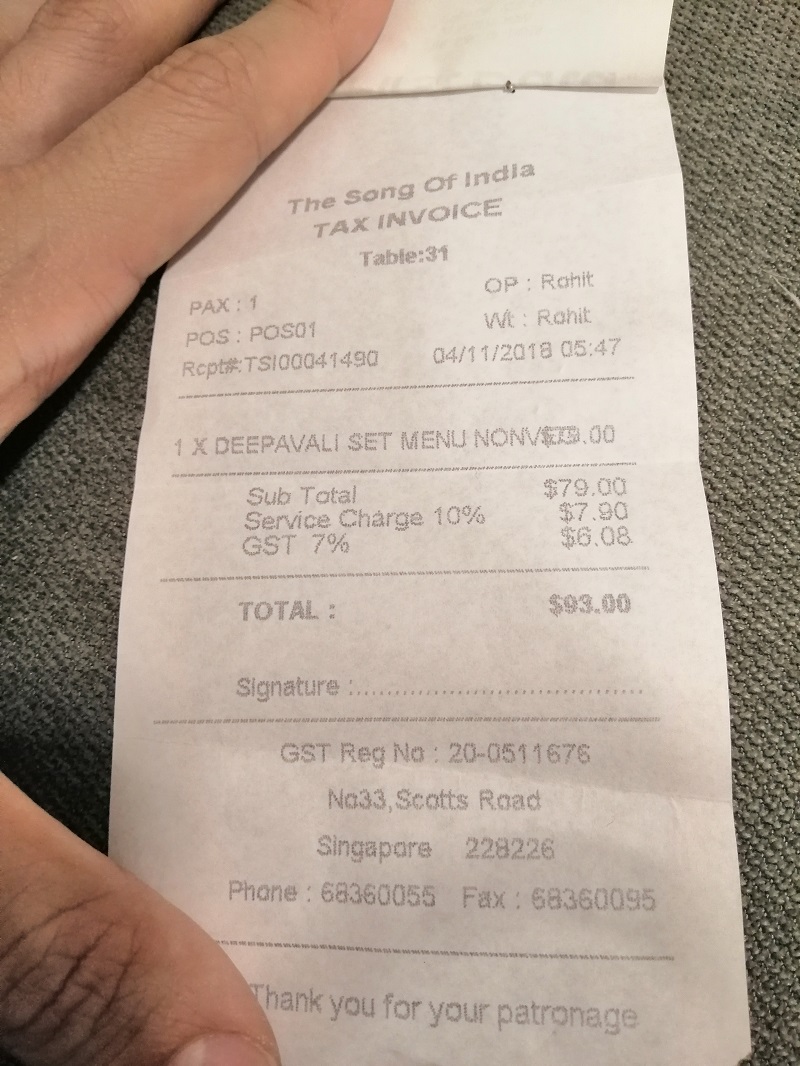 This got better after another group came in but he started neglecting my water and food after fretting over the large group. He also kept asking me to give him a good review on TripAdvisor. I’ve read this complaint on the site and thought management put a stop to it. Nope. The waiters are still doing it. Not only that, he asked me twice to mention him (Rohit) personally in the review. “Helpful to my career”, he groveled with a sleazy grin. He mentioned his name is in the receipt again when he passed it to me. The service is not just inept, it’s disreputable at times. 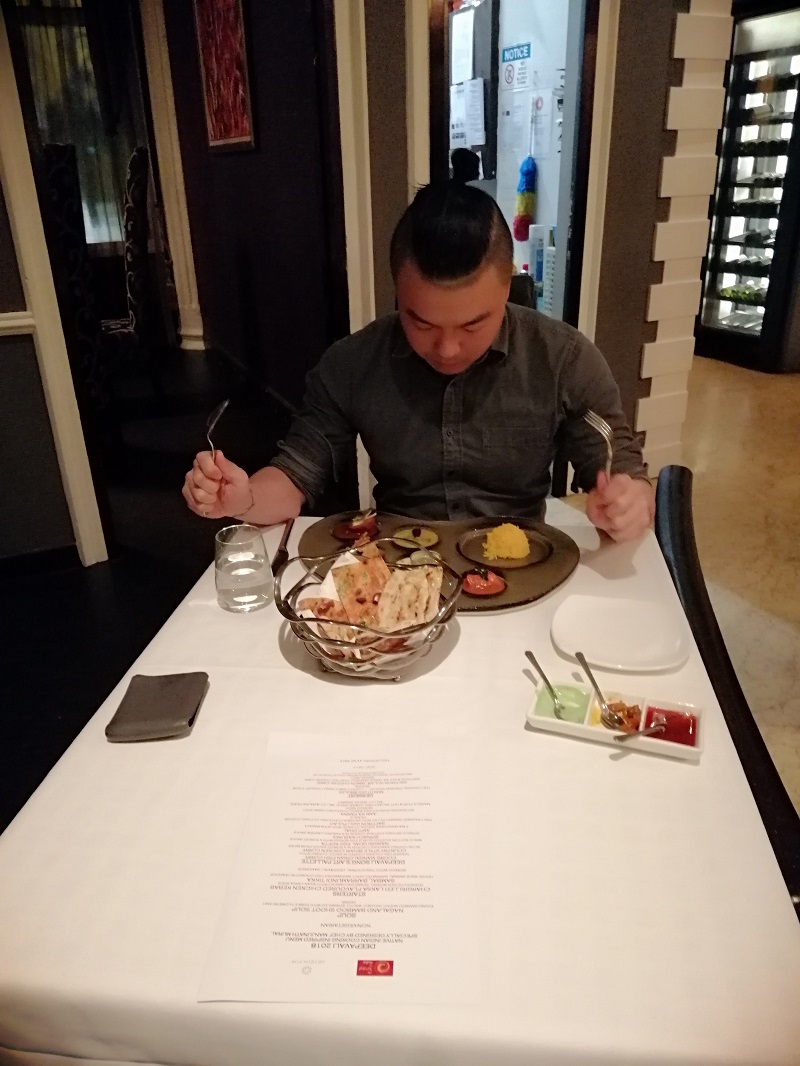 Did you notice the open utility closet behind me? I can see your brooms, bro.

I cannot in good conscience recommend The Song of India. I wanted to try the first Indian restaurant to get a Michelin star in the region and ended up utterly disappointed. The food was cold and mostly forgettable, except for the wonderful naan and their delicious desserts. I saw Andy Hayler mention this in his review and thought they bucked up. They haven’t. Service was unpleasant and slightly seedy. The bill came up to SGD 93 (RM 283) for 1 pax. Don’t waste your money.