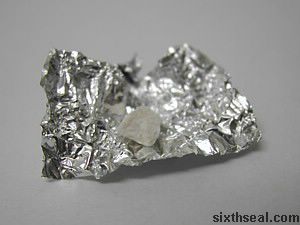 A off-white solid chunk of heroin in foil.

Heroin. The name alone invokes fear in the hearts of man. Okay,
maybe that’s an exaggeration, but you’ve gotta admit, this drug sure
has a bad name. :) There is a particular ‘S’ suburb here that’s known
for having dealers of heroin on the streets. I went to check the place
out at the beginning of the week. There are several dodgy looking
people around the main street, and after standing in front of the
central part, I noticed several guys who seem to be a permanent fixture
of the place. One of the guys were obviously nodding out, stumbling
around with a vacant stare and all that. I went up to one of them and
stuck up this conversation:

Me: Hello, are you from around here?
Dealer: Yeah, what’s up?
Me: I hear you can get stuff here.
Dealer: (cautiously) What kind of stuff?
Me: Drugs.
Dealer: What do you want?
Me: What do you have?
Dealer: I only have heroin, you know, smack.
Me: Okay, how much are they?
Dealer: How much do you want?
Me: I only want a small amount.
Dealer: I have A$50 caps.
Me: Sure, I’ll have one of those. I hear there’s a lot of cops around here too, should we go somewhere else?
Dealer: Yeah, you gotta be careful around here, there’s heaps of
cops in this area. I’m scared man, you don’t look like the type that
buys smack.
Me: Well, I’m just experimenting. I’m a student, actually.
Dealer: Okay, walk with me.
(We walk into a shopping center)
(He seems to chew on something for a bit and inconspicuously slips something out of his mouth and hands it to me)
Dealer: Here you go.
(I hand him a A$50 bill)
Dealer: Is this your first time doing smack?
Me: Yeah. I was planning to just snort it.
Dealer: It works better if you smoke it. Just burn it on a foil and smoke it with a straw or something.
Me: Yeah. I know that method too.
Dealer: Okay, take it easy man. 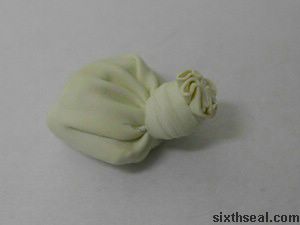 The bag of heroin, look at the detail in the knot. Very nicely wrapped.

After that exchange, I left with a small package wrapped in balloon
that just came out of someone’s mouth. I heard that dealers of heroin
do that here, so that if they’re arrested by the police, they just need
to swallow the balloon packages and they can just throw up or wait for
it to come out on the other end. Thinking about that disturbed me
somewhat, and I proceeded to walk into a restaurant to wash my hands. 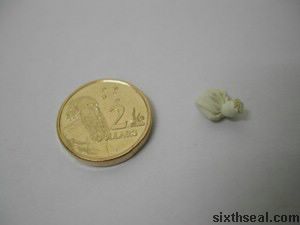 Size comparison – pictured with an A$2 coin.

Upon reaching home, I inspected the package I had just got. It’s a
nicely wrapped bag that’s slightly smaller than the diameter of a
pencil. It’s very, very small indeed. The outer layer of the bag is a
balloon that’s been wrapped and knotted very tightly. I couldn’t undo
the knot so I just snipped it off with a pair of scissors. Inside the
bag was a small piece of heroin wrapped in aluminum foil. Professional
gift wrappers would be proud of the finesse going into the packaging of
heroin. :) 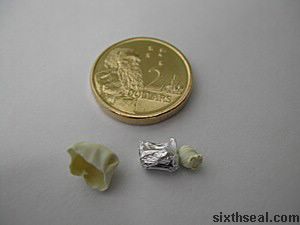 The heroin is wrapped in a small piece of aluminum foil and put into the balloon.

Anyway, the heroin came in an off-white solid chuck, which was quite
hard to break up. I used a spoon to split it in half and made it into
powder by running the back of the spoon repeatedly over that chunk.
Sources say that the cap contains approximately 50 mg of heroin. I was
surprised at the small amount contained in the cap, until I learnt that
heroin is active at very small amounts. Usually first time users do
about ¼ of the bag if they’re injecting, but since I won’t be using
that method of administration, I decided to insufflate (snort) ½ of the
bag and leave the other ½ for smoking in two days time. 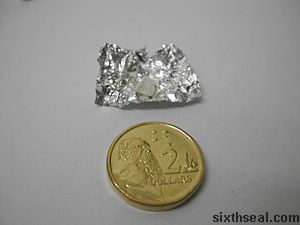 The solid chunk of heroin in the aluminum foil. 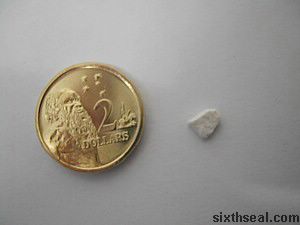 The off-white solid piece of heroin next to A$2 coin. 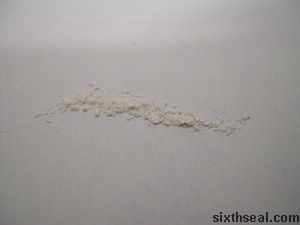 The line of heroin after I powdered it with a spoon.

10:10 pm
burned a fair bit going up the nose.decided to snort half of that
amount to be safe. yeah its definately burning a fair bit when i
snorted it.

10:16 pm
shit…that just like snuck up on me. i didn’t even notice it until
now. hehehe yeah, its euphoric :) i’m feeling sedated, very nice. gonna
snort the other half in 3 minutes unless something happens.

10:17 pm
this is going to sound cliche, but it feels good just to sit here.i
even forgot to turn on my fan and summer here is hot.now that i think
about forgetting to turn on the fan, i’m not even bothering to turn it
on. you know wat i mean?

10:20 pm
very noticable effects already, but i’m going to snort the other half anyway.

10:23 pm
yeah its very noticable now. i feel like the world is muffled…everything seems so far away.

10:27 pm
very prone to zoning out. just sat there looking at my hand and that just feels nice.

10:34 pm
i get that numb feeling. my face is numb and so are my fingers. everything has a slow quality to it. slow. tingly.

10:40 pm
its very different to a stimulant high. i’m just feeling so safe and
contented, its a cliche but its true. it feels the way it does when
you’re young and you’ve just woke up from a good night’s sleep and the
warm sun is shining in and today’s a holiday and you don’t have to do
anything, you just lay in bed and read and its comfortable. that made
me smile. :)

10:44 pm
this just feels so good. it’s not like other drugs, its not the
ecstatic happiness of MDMA (feels like you’re about to go on a really
good vacation you’re really looking forward to), it’s not like
stimulants where you go “fuck i can take on the world!!!”, this is like
a comfortable, very comfortable feeling that you lose as soon as you go
into puberty. its an innocent sort of comfortable where the best thing
is that you’re feeling comfortable and safe and warm in your house. and
that’s all that matters, nothing can hurt you. its the feeling of
picnics and reading books and eating cheese cake and nice weather and
mom taking care of you when you’re sick and i’ve got it! its the
feeling of being a kid, where there are no real problems, only little
ones, and you don’t need to do anything, you just hang around and feel
comfortable and they’re parents there to take care of you. damn, thats
what it feels like. return to childhood.
its the feeling of waking up on a saturday morning to the smell of
french toast and you just lie around in bed waiting for your mom to
call you down to eat breakfast and you’ve had a great nites sleep and
the only thing you want to do is read a good book, a safe book where
there are no great problems and everything turns out to be okay in the
end. jesus, you just don’t get this feeling anymore after you grow up.
no wonder people get addicted to this shit. it’s really comfortable.

10:56 pm
my lips feel numb and my tongue feels swollen and it’s a little hard to
breath but it’s all good. damn, it’s all good. this is not the Oh my
fucking god, this is great when you take stimulants but the yeah…this
is real good of downers.

Afterthoughts: There was no withdrawals or crash to speak of,
but I did have this godawful nausea, dizziness and major stomach
churning at the end. It didn’t make me itch though. It felt very nice
and comfortable, but it’s not something I would do often. I’ve probably
said this before, I prefer hallucinogens and stimulants. It was a very
nice experience though. The feeling heroin gives is hard to describe,
but the best adjective would be comfortable. Very, very comfortable. 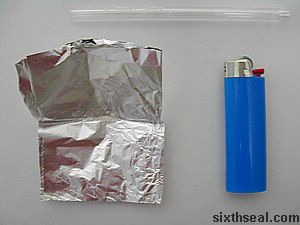 9:02 pm
that warm feeling pretty much came instantenously :) when i burned the
stuff, it smoked a whole lot and i couldn’t get everything thru the
tube (wat a waste) so i started to breath with my nose as well and held
the smoke in for about 2 minutes. i felt The Blanket right about then.
:) i did get a whole lotta foil smoke though. interestingly, the heroin
turned into a liquid when flame was applied under the foil and started
to turn into a mini liquid river which ran down the line of the foil.
part of it turned into a black gunk and part of it turned into a
yellowish stain after all of it has been burnt. yeah i feel numb now. :)

9:12 pm
yeah the feeling is the same as insufflating, but i think i got higher
when i snorted it though. perhaps i didn’t get all the smoke when it
started to smoke violently. it does feel nice, but not as intense as
insufflating.

9:21 pm
ah, i’m feeling it now. comformtable. :) made me smile again. heh. what
a late rally, i thought it’s supposed to be near instantanous for
smoking.

9:37 pm
had fun zoning out. don’t feel like staring at the screen though, gonna lie down and read a book. :)

9:44 pm
i just had this bright idea to mix a couple of shots of my cannabis
infused grain alcohol into a beer and take a valium. i am aware of the
potential risks but this is such a small amount it doesn’t matter
anyway. cheers! :) 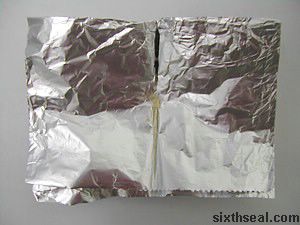 What the foil looks like after smoking – yellow stain where it evaporated from a liquid and a black stain to the side.

Afterthoughts: Heroin is rather overrated in my opinion. It
certainly feels nice, but it’s not the best drug in the world, not by a
long shot. The media makes it seem like such a hardcore drug that you
can’t help but feel let down by the experience. It is however a very
illegal drug due to the problems surrounding its use and the potential
for addiction. Perhaps I just don’t have the type of personality that
appreciates heroin’s effects. I still prefer hallucinogens and
stimulants. :) It is a very nice feeling though, just not something
I’ll do very often. Interestingly, I got higher when I insufflated than
when I smoked heroin.

Caution:
Heroin is very illegal in most (all?) countries.
Heroin is physically and psychologically addictive.
While it may not be the demon drug the media and government makes it
out to be, it is easy to get into trouble in a very short time if you
do it often. Be careful and respect heroin.