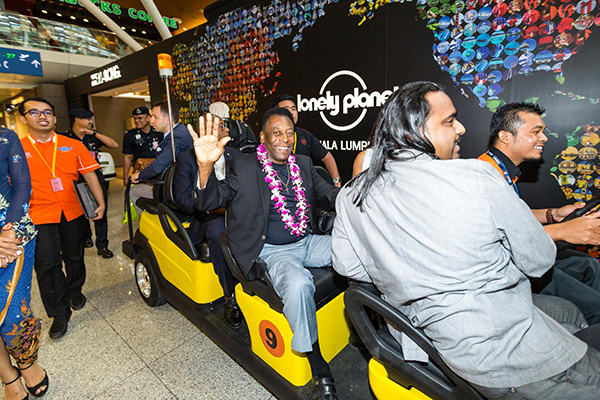 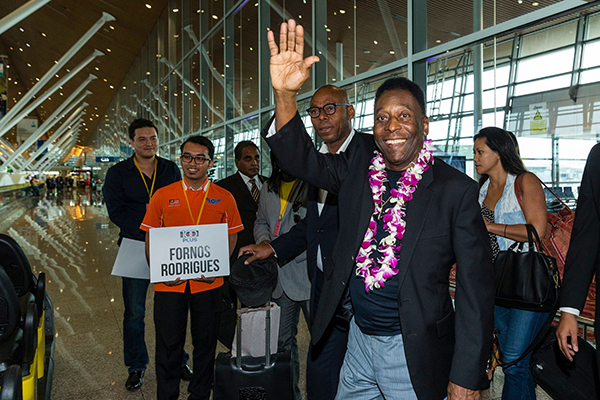 Unfortunately, I wasn’t at KLIA to greet Pelé, I doubt I’ll be given access anyway with the mob of people waiting in line to see him. I got the photo from the 100PLUS Facebook page. They’re bringing football legends Oscar and Pelé to Kuala Lumpur for an action packed appearance. Good thing I have an invite to see them on May 29th – this Friday! 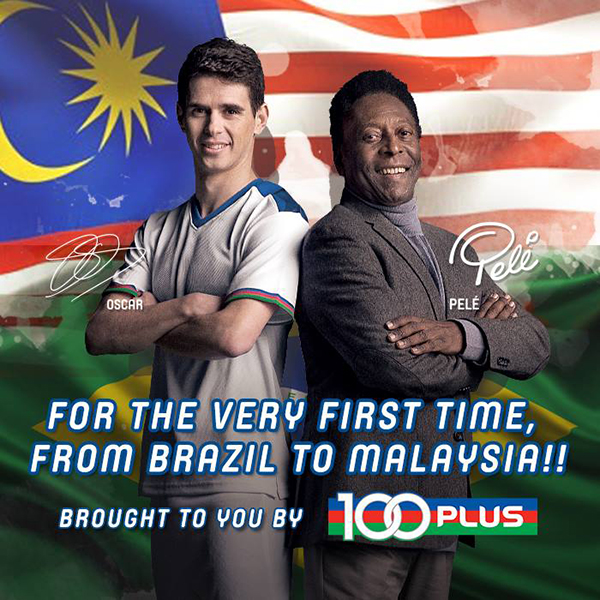 Well, if you don’t know who those two are, I guess you don’t watch much football. Oscar dos Santos Emboaba Junior is a Brazilian for Chelsea and also plays for the Brazil national team. He’s a fast rising star, despite his young age.

Pelé needs no further introduction. Born as Edson Arantes do Nascimento, he’s been around for so many years that even non-football fans know his name. He was elected as Athlete of the Century by the International Olympics Committee (IOC) and despite being retired, this Brazilian is still a formidable force, being the most successful league goal scorer in the world with 541 goals. 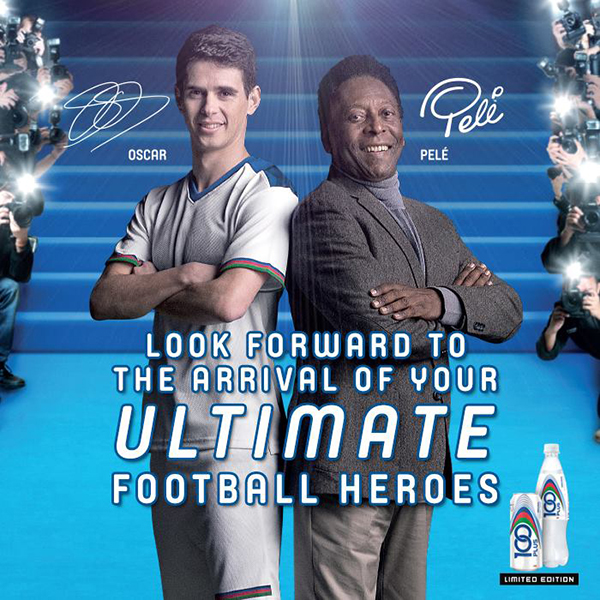 Thanks to 100PLUS, two of football’s finest, Pelé and Oscar are coming to Malaysia on 29th May in conjunction with their “Stay Thirsty” campaign. 100PLUS has also chosen 100 lucky winners to join them at Kuala Lumpur Convention Centre this Friday.

Oscar and Pelé are the first international ambassadors signed by 100PLUS and were chosen to inspire youths across the nation via the “Stay Thirsty” campaign. Through the campaign, 100PLUS wants to encourage youths to strive and push beyond their limits, and hunger to be better. 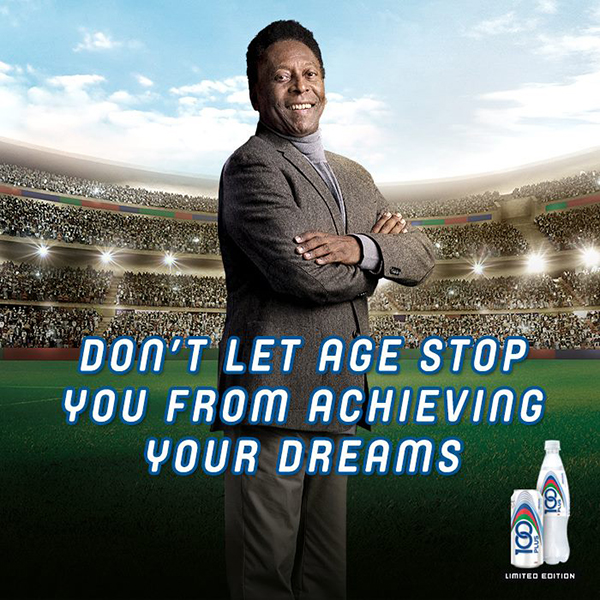 During their visit to Malaysia, Oscar will be conducting a “Stay Thirsty” Football Clinic for the four Ministry of Education Football League Zone Champions, sharing his knowledge and skill for the sport. YB Khairy Jamaluddin, the Minister of Youth & Sports, will be present too. 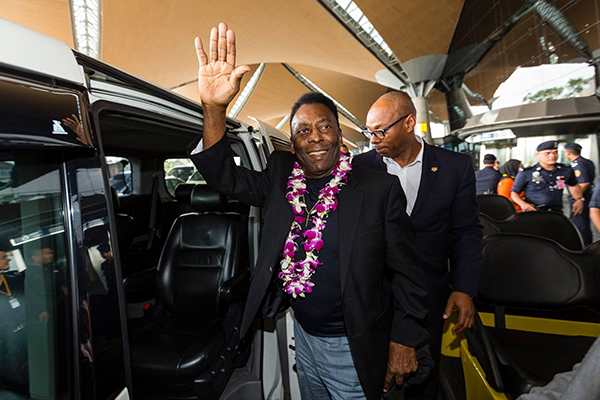 Pelé will be sharing his vast experience with the National Football Team. This forum isn’t just open to the 100 lucky winners and the media at the event. 100PLUS is taking this to the viewers at home via a live stream of the event on their official website. This means that *YOU* will be able to participate with the Q&A with Pelé by submitting your questions via Twitter. 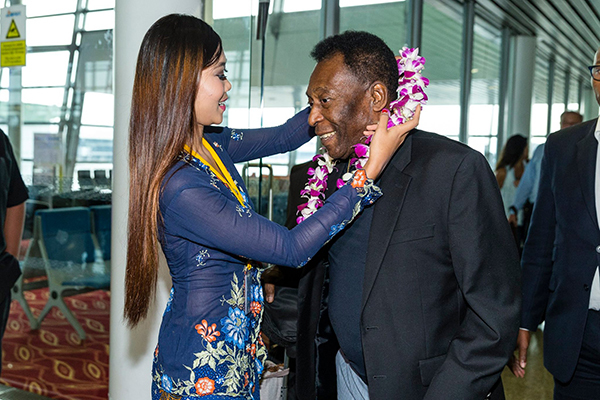 I know you’ll have heaps of questions to ask Pelé so remember to log on to the 100PLUS official website for the live streaming of Pelé’s Team Talk on 29th May 2015 at 3:30 pm. Tweet your questions live to Pelé using the hashtag #100plusstaythirsty.

You can also surf over to watch the delayed streaming of Oscar and Pelé live in Malaysia if you missed it or like the 100PLUS Facebook page for more information. I got all of my photos from their FB page and I’ll be at the event this Friday, make sure you log in from your office/home/university too! 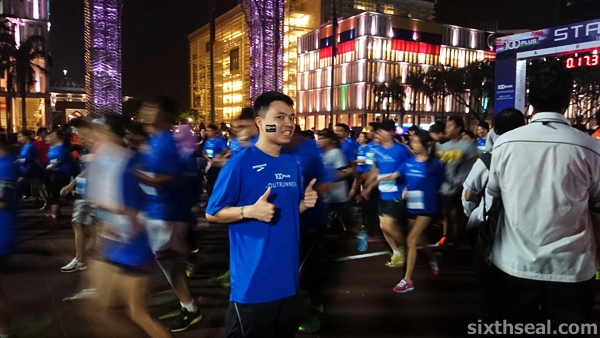 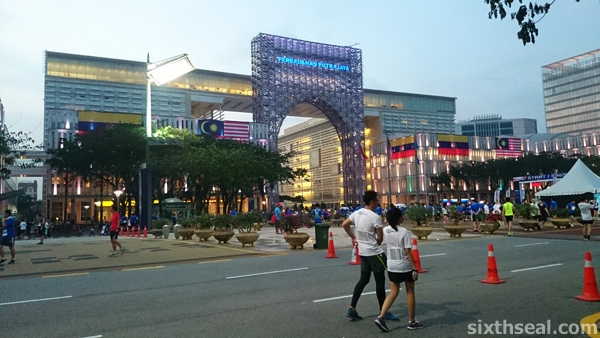 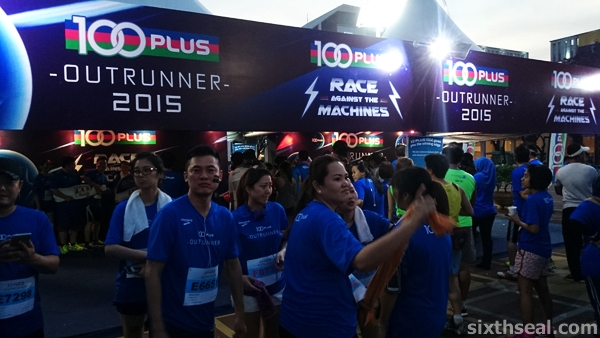 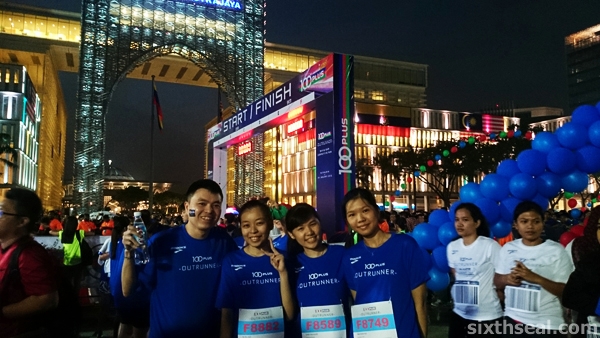 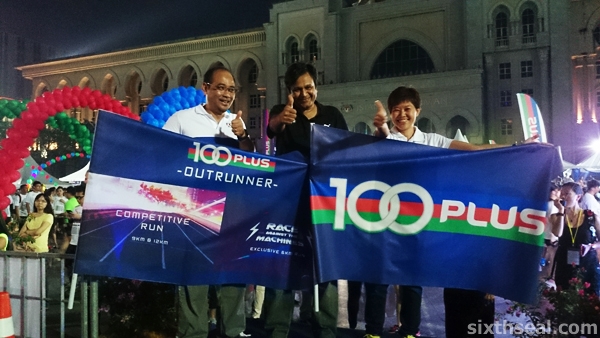 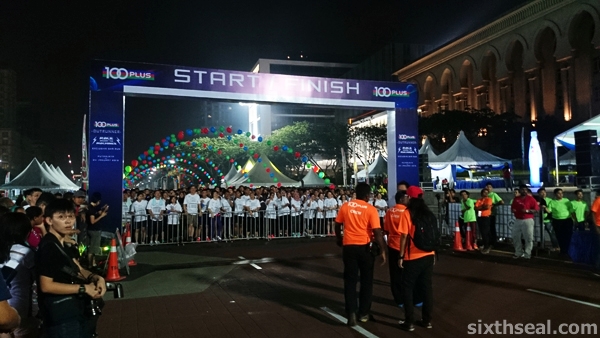 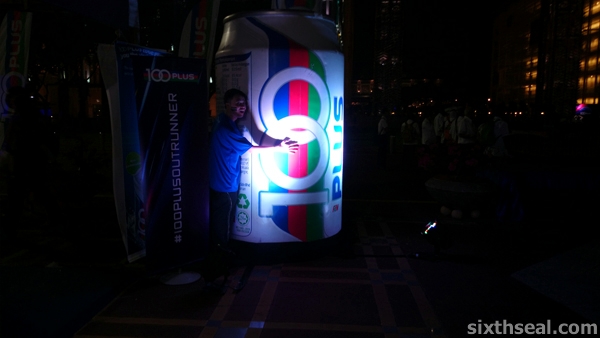 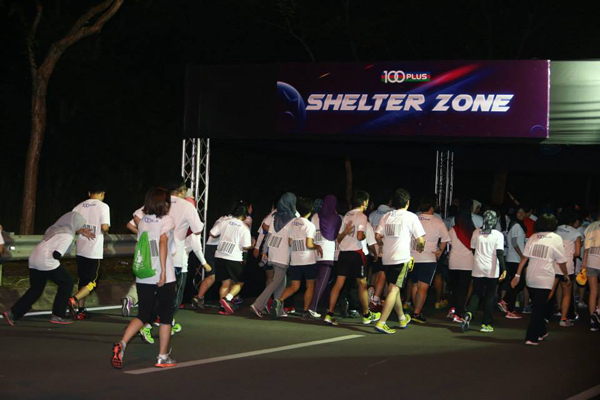 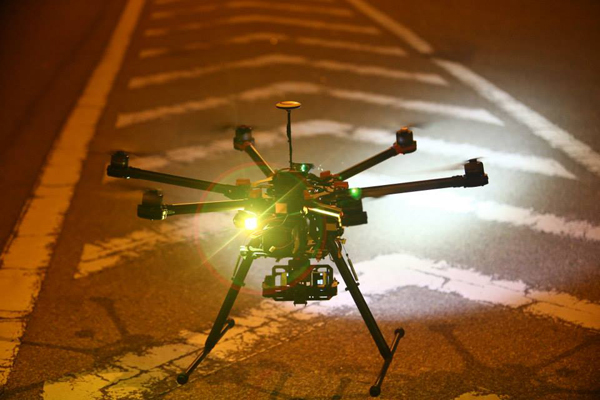 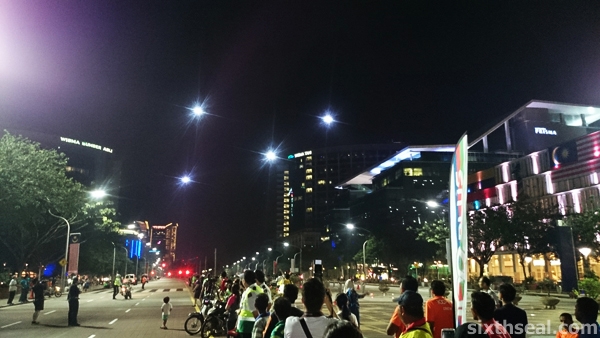 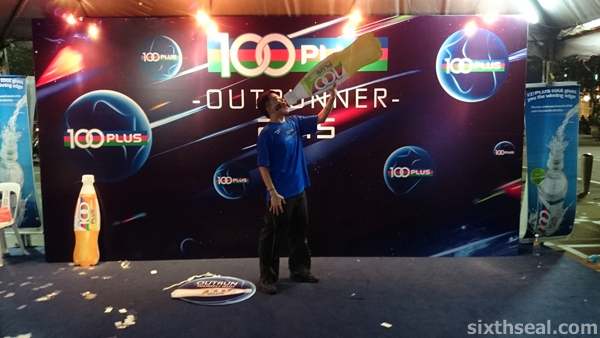 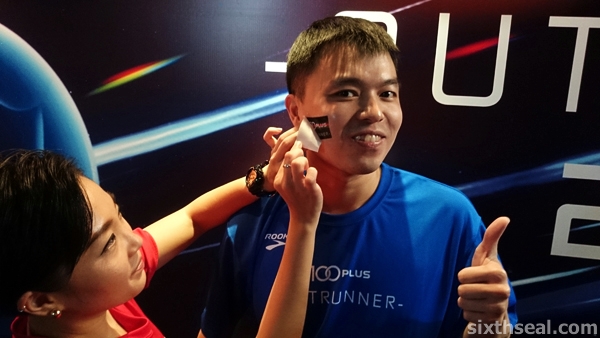 Remember the post I made about mountain biking down a flight of concrete stairs? It’s now available at outdoyourself.com.my under the Extreme Sports category. You can vote for the video here.

My ranking is now a respectable 6.3 points but I suspect that’ll change very soon since it’s the only video in the Extreme Sports category. The other one is a sample video. Now, I’m sure you can do better than me, so start filming yourself doing the Me Against the World Challenge.

You can do Sports, Dance, Extreme Sports or Lifestyle videos. It’s no fun being the King of the Hill if I’m the only one on the hill so get off your respective posteriors and challenge me! 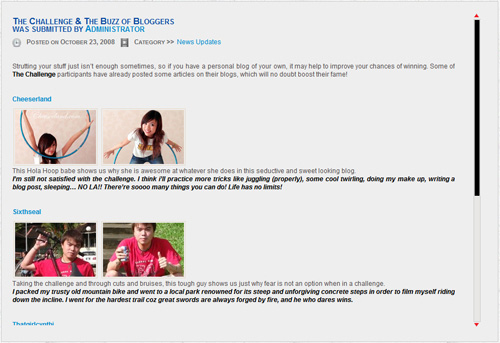 I like how my blurb goes – “Taking the challenge and through cuts and bruises, this tough guy shows us just why fear is not an option when in a challenge”. I’m sure you can do better than me so let’s bring it on – strut your stuff! The contest is open to everyone!

The Me Against the World Challenge energized by 100PLUS is going on a college roadshow tour with JJ & Rudy of Hitz.fm Morning Crew fame making a special appearance at HELP University recently. Note down the dates of the college roadshows:

Challenge yourself at the college roadshows or upload a video of yourself doing something challenging in one of the four categories to win prizes from Nike, Sony and Topshop.

Not so keen on mountain biking down concrete stairs? Well, you can always register as a voter and vote for your favorite videos. You get a chance to win Nike vouchers worth RM 50 every month. There will be 5 vouchers given out per month so you stand a pretty good chance at snagging one of those by just voting.

Voting for me, of course. 😉 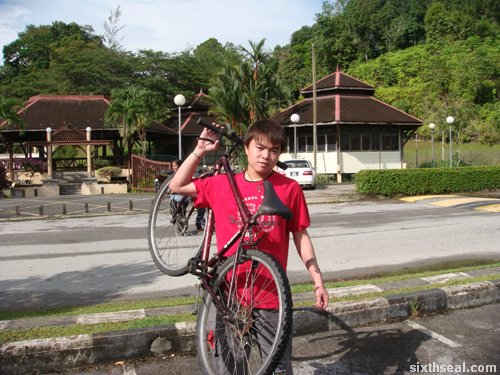 I used to mountain bike, and would always challenge myself to do something cool. It’s been some years but then, I came across a very interesting challenge called Me Against The World energized by 100PLUS. Now I can prove myself to the world how good I used to be!

Thus, I packed my trusty old mountain bike and went to a local park renowned for its steep and unforgiving concrete steps in order to film myself riding down the incline. I went for the hardest trail coz great swords are always forged by fire, and he who dares wins.

I’m not a very good mountain biker but I did it with sheer determination and perseverance.

Life has no limits, and there are bound to be spills (and thrills) but if you push on and never give up, and just keep on going, then you’re in a position to challenge yourself, and challenge the world.

The online challenge is going on from the 15th of October 2008 to the 15th of February 2009. Upload a video of yourself doing something challenging within these four categories:

…and get people to vote for you to win fantastic monthly prizes. The top 12 ranked videos (3 per category) will win:

The Top 12 ranked videos at the end of the campaign period will be selected to perform LIVE at the Challenge Finale where the top three prize winners will take in a combined RM 12,000 in prizes from Sony, Nike, Topshop and 100PLUS.

Alternatively, choose to just register as a voter, and win monthly lucky draw prizes. The 5 lucky winners every month will win Nike vouchers worth RM 50 each. 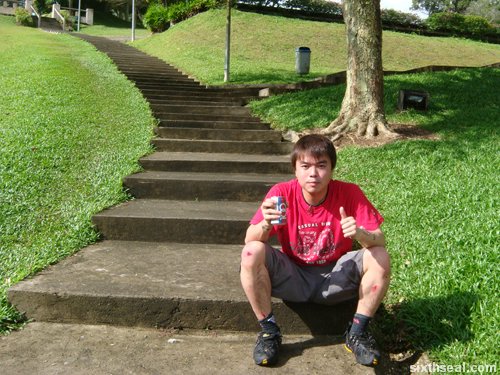 I’m a novice mountain biker and I can do this challenge in one morning. Do you have what it takes to challenge me? Take a video of yourself doing something challenging in one of the four categories and post it on the site and prove to the world you’ve got what it takes.

Life has no limits!

Your moment of truth awaits you. Strut your stuff and discover your capabilities at the Me Against The World Challenge energized by 100PLUS!