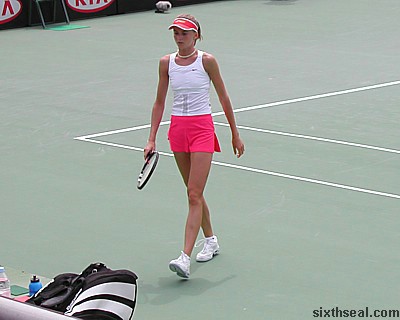 Daniela Hantuchova is delicious! I watched her play today because
Anna Kournikova’s match was held in Rod Laver Arena and the tickets to
those has sold out ages ago. Thus, I went to Margaret Court Arena
instead and watched two matches: Denisa Chladkova (CZE) vs. Alexandra
Stevenson (USA) and Daniela Hantuchova (SVK) vs. Adriana Serra Zanetti
(ITA). I was there at 9 am so I managed to get a good seat. 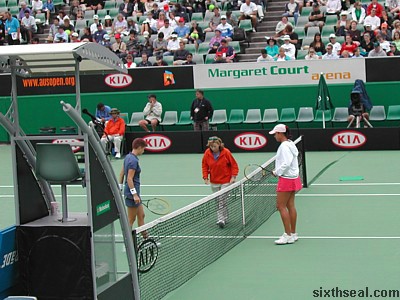 When I arrived at Margaret Court Arena, Denisa Chladkova was already
practicing with a couple of other people at that time. The match was
supposed to start at 10 am and she changed and came back in again at 10
am. She wore a blue outfit and has a seemingly endless amount of new
rackets. I saw her change her racket mid-game. Alexandra Stevenson on
the other hand was wearing a bright pink ensemble. She was wearing that
under a tracksuit while practicing and she got a few catcalls when she
took off her tracksuit. I admit, she does look pretty good in pink. 😉 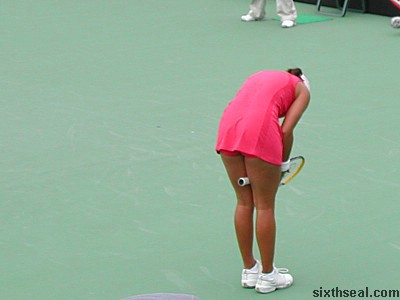 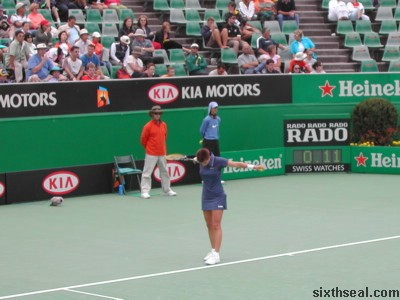 Alexandra Stevenson is the 15th seed but I was rooting for Denisa
Chladkova coz I like her on-court personality. I don’t know how high
Denisa Chladkova is ranked but usually it’s a higher ranked player
(Alexandra Stevenson) against a lower ranked one. 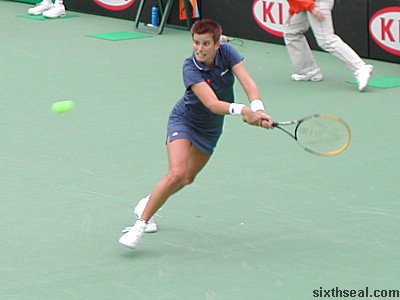 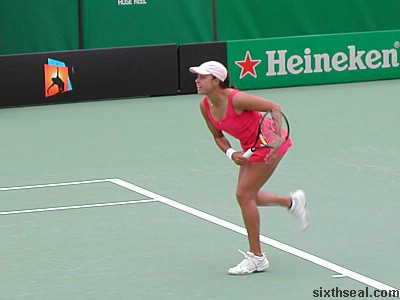 Arrrggggggghhhhhh!!!
(heard after missing a ball)

No!!! This is so ridiculous!!!
(heard after hitting an out ball)

It wasn’t even ON THE LINE! It was OUT!
(heard after the umpire’s decision that Denisa Chladkova’s ball was in)

A very high strung individual if I ever saw one. 🙂 Anyway,
Alexandra Stevenson walked off immediately after losing the match, and
Denisa Chladkova stayed a while to sign autographs. 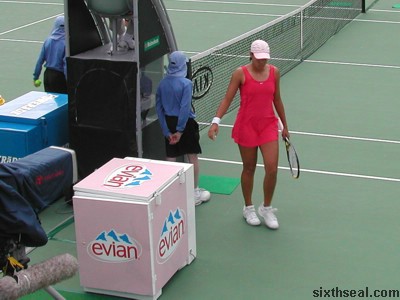 Alexandra Stevenson going off after the losing the match

Interesting notes about this match:
Denisa Chladkova has a stash pocket in her skirt that allows her to store an unlimited amount of tennis balls, or so it seems. 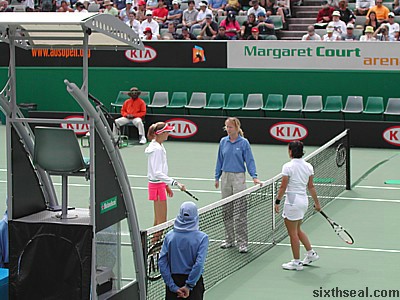 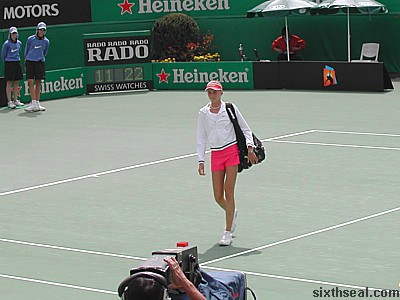 Daniela Hantuchova walking into the court 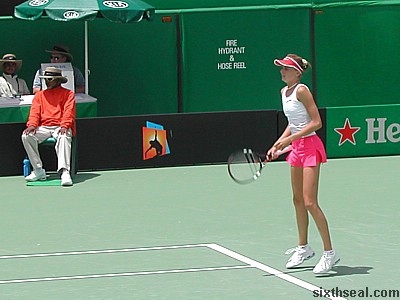 Look at those legs

Famed for her long legs, she was wearing a pink skirt/short combo
and a sleeveless white top. Adriana Serra Zanetti was wearing a white
skirt and top. It’s worthy to note that the court was full for this
match and there were people watching from the top of Rod Laver Arena as
well. Daniela Hantuchova is popular with the crowd so that’s not a
surprise. 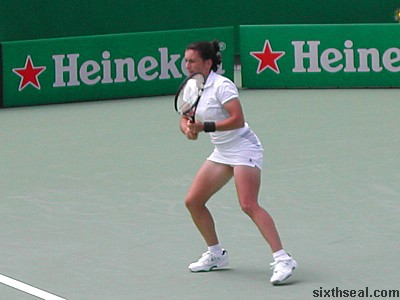 Anyway, it must be hard for Adriana Serra Zanetti because she didn’t
get much cheers from the crowd while everyone cheers loudly whenever
Daniela Hantuchova got a point. There were constant chants of “Go
Daniela” as well. A further demoralizing point is that all the cameras
were pointed at Daniela Hantuchova almost all the time. 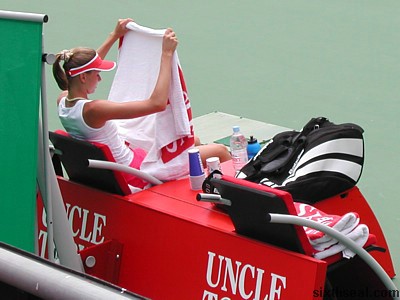 Daniela Hantuchova resting during a break

The match was very exiting though. It wasn’t an easy win for Daniela
Hantuchova, she was worked VERY hard by Adriana Serra Zanetti. The
first set was close…it went to 7-6 (6). The next set was even closer.
Daniela Hantuchova came back from a 4 game deficit to pull the game
into a tiebreaker. Man, was that tiebreaker exciting. 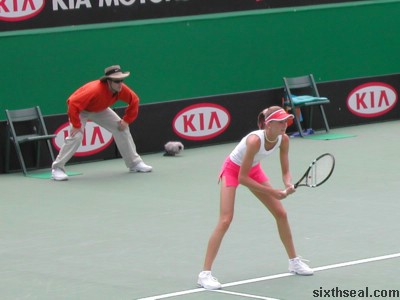 It went well for Daniela Hantuchova at first, but Adriana Serra
Zanetti gave her a serious run for her money and it went back and forth
many times at game point. I don’t watch much tennis, but that had me on
the edge of my seat, biting my nails or whatever cliché you like. 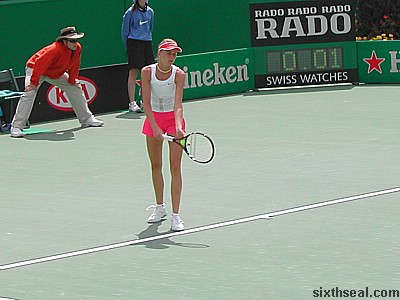 It wasn’t much fun for Daniela Hantuchova, she threw her racket on
the court in frustration two times after missing two crucial chances to
take the set. Unfortunately, I missed her doing it both times coz my
digicam’s battery was low at that point and I couldn’t turn it on fast
enough to take a photo of her doing that. However, after this back and
forth excitement, she finally took the match. Before that, there was
already a queue to get her autograph and I was near the front so I was
crushed a bit in my attempt to take a close up photo of her. Good game,
I really enjoyed this match. 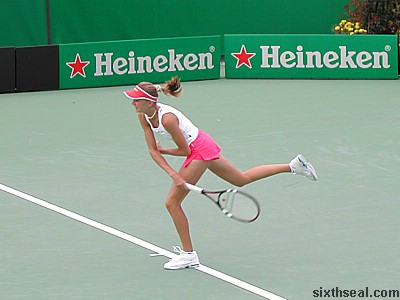 Interesting notes about this match:
Daniela Hantuchova has a pretty big bruise on her left thigh.

Anyway, I walked around and watched a couple of matches at the other
courts before heading home. I saw on the big screen TV that Anna
Kournikova lost 6-0 6-1. 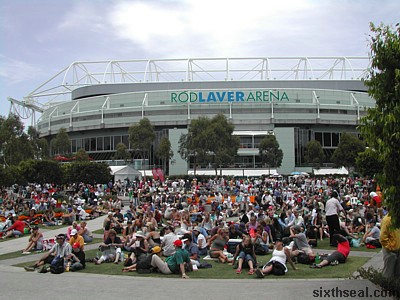 There were several other stuff happening around the central court
too, a lot of tennis related games and other interactive stuff. 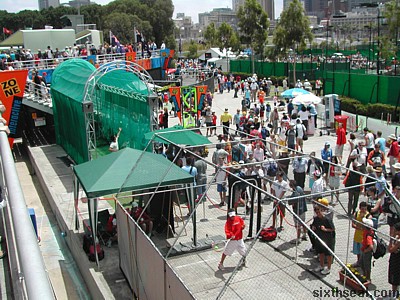 Oh, and I got really badly sun burnt today. My face and arms are
red, itchy and peeling and it hurts when I touch it. I thought I didn’t
need any sun screen coz today’s forecast was going to be 23 degrees
max. Unfortunately, I’ve learnt that it doesn’t need to be hot to get
sun burnt and also that it is very easy to get badly sun burnt in
Australia. And there I was, thinking “haha pussies” at all those people
putting sun screen while watching the match. 🙂

P/S – Don’t forget to click on the Picture of the Day (PoTD) at the
right hand side menu for one of the better photos I took of Daniela
Hantuchova today.