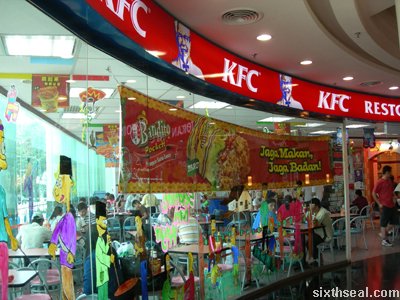 KFC just came out with a new Mexican themed wrap called the Bandito Pockett with Pineapple Salsa Sauce.
It features a lot of cultural themed advertisements that Hispanics
would probably find offensive due to the heavily stereotyped
distillation of their culture. It’s a good thing we don’t have a large
Hispanic population over here. 😉 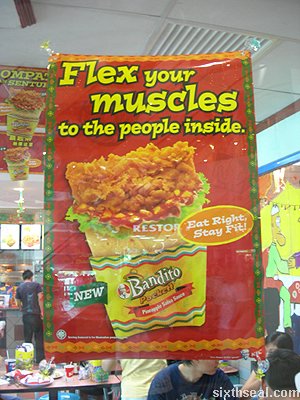 The KFC Bandito Pockett Pineapple Salsa Sauce is unusual in the
promotional arena due to the emphasis on action oriented lifestyle
concepts that is so predominant in this ad campaign. There is a
distinctively “macho” feel to the promotional material which comes with
taglines like “Flex your muscles to the people inside”. 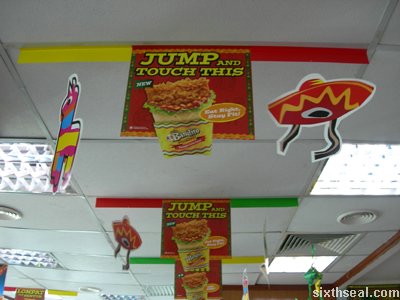 The taglines range from vaguely interesting and chuckle inducing to
the overboard trying-too-hard-to-be-funny promotional cardboard place
cards. There are Bandito Pockett promotional banners lining the top of
the KFC franchise with the phrase “Jump and touch this”,
which toes the line between cheesy humor and plain unfunny but the one
that takes the cake is the promo liner holding the ketchup – it goes “Start an arm wrestling match with the person sitting opposite you”. 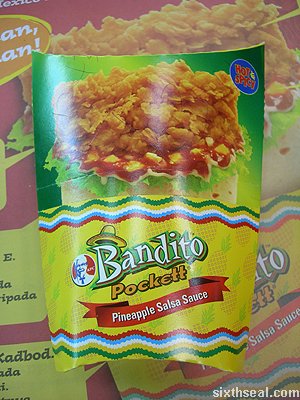 Anyway, back to the food, here’s a look at the KFC Bandito Pockett
Pineapple Salsa Sauce packaging – it has a cardboard wrap that requires
opening, a design surprisingly similar to the McDonald’s Grilled Chicken Foldover [sixthseal.com]. 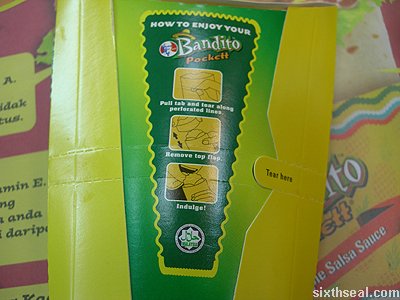 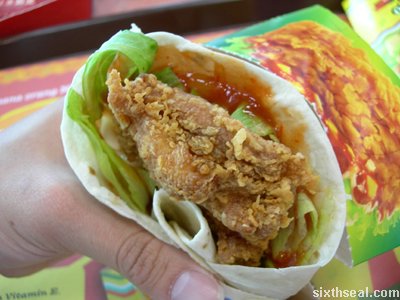 This is what the KFC Bandito Pockett Pineapple Salsa wrap looks like
– there’s a piece of Hot and Spicy chicken in there, mayo, lettuce and
salsa. The tray liner describes the ingredients more eloquently than I
am capable of:

Lettuce
Rich in Vitamin A
Improves eyesight so we avoid running into cactuses (shouldn’t it be cacti?)

Mayonnaise
Rich in Vitamin E
Good for the heart, especially when you’re playing ‘avoid-the-rattlesnakes’ in the desert.

Cardboard wrapper
Made of high quality paper
High in Fiber.
(Warning: Not for eating)

Hot & Spicy 100% real chicken fillet
Rich in protein and bird flu carrier
Builds muscles for climbing over tall fences (and takes it all away again when avian flu sets in).

Pineapple salsa sauce with real pineapples
Lots of Vitamin C
Prevents colds in case some donkey sneezes on us.

Tortilla flatbread
Low in fat
So we can jump on our horses without breaking their backs.

I made up that bird flu bit btw; no one in their right mind would want to highlight that in KFC. 😉 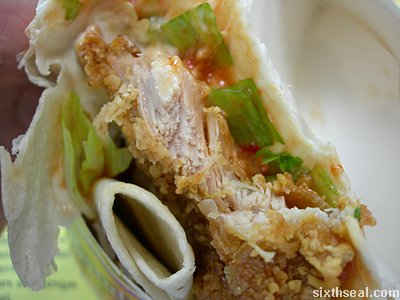 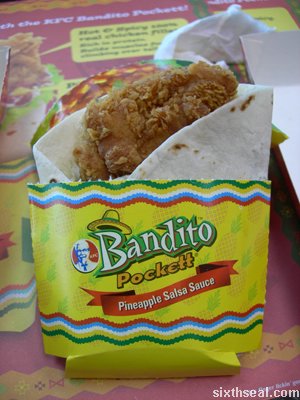 Hmm…I’m seriously thinking about having another one despite the fact that I just ate there this afternoon.

Now, that’s fast food for ya…