Look at this picture of a dead possum! It was left out for so long it looks slightly mummified. 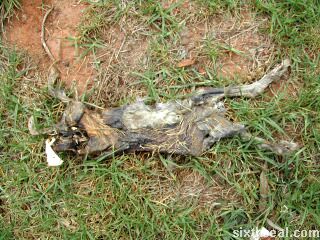 Saw it today while using a shortcut back to halls. It’s a rarely
traveled path so it’s no wonder it’s been unnoticed for so long. I’m
gonna make this Picture of the Day. 🙂

Well, I finally sorted out all my subjects today. Today is the last
day to add subjects and 5 pm is the cut off time. I got an email from
the GSC2714 Alcohol and Drug Use
[monash.edu.au] lecturer at around 4 pm that said I could enroll in the
subject even if I didn’t do the co-requisite. I did a first year
Psychology subject back in Inti College, Kuching and he accepted that
as a pre-requisite.

In a last minute decision, I dropped one of my CSSE subjects and
took this one. I already had more than enough 3rd year CSSE subjects to
meet the requirements and already had enough for two specializations,
so I’m taking an interesting subject for a change this semester. I’ve
previously only taken subjects from the CSSE (Computer Science and
Software Engineering) faculty.

This should be an easy semester for me. I’ll be pretty comfortable
with CSE3151 and CSE2030 from the subject description. I’m also taking
a first year subject from the Electronic Commerce faculty as an
elective coz I figured it’ll be easy and it’s somewhat related to my
degree anyway. And finally, GSC3714 Alcohol and Drug Use, a Behavioral
Science faculty subject and something I’m personally interested in, so
this should be fun. They even have an agency visit to a related
organization planned, which we’re supposed to write up and give a
presentation on.

I also managed to allocate all my classes to Tuesday, Wednesday and
Thursday so I have an extra long weekend. Heh! 🙂 Well, I also paid all
my bills and sorted out some stuff today so everything is ready for the
new semester. Did you know I couldn’t make outgoing calls on my cell
phone yesterday because I forgot to pay the bill? It just slipped my
mind and I only paid it today and got it unbarred again.

Paid my course fees and halls rent too, so everything is settled.
Phew. Had to run around a bit today. Since there is a limit of EFTPOS
transactions here, I had to withdraw A$3,500 from the bank earlier in
the day to pay for everything. They didn’t have A$100 notes so it was
all in A$50 notes. I couldn’t even fit that pile in my wallet! I tried,
but my wallet wouldn’t fold after that. I had to carry it around like a
stack of letters.

Anyway, there seems to be a lot of competing calling cards nowadays.
The prices for calls to Malaysia have all dropped down to several cents
compared to 20c when I just came here. There were heaps advertising
4.9c, 3.9c, 3c and such. I saw a new card called Australian Express
which stated 3c to Malaysia. Usually, the quality of the connection for
the low cost ones are terrible, so I just got an A$5 one to test it out.

I found out that it was made by the same company as Planet Telecom Australia
[sixthseal.com], which I mentioned in that post as having an absolutely
terrible connection. The dial in numbers for Australian Express were
the same as Planet Telecom Australia so I wasn’t expecting much. I was
pleasantly surprised that the connection quality has improved. However,
they have an absolutely appalling connection fee/flagfall/watever. I
called back home to discuss my subjects with my dad and got my mom and
I called my dad’s cell and talked for probably all of 15 minutes and
that was the end of the card.

Granted, it was only a A$5 one, and calls to cell phones are charged
a higher rate, but that means their connection fee is really, really
high. It said I had 96 minutes when I called my home phone (there’s
something wrong with their math here somewhere, that’s not 3c per
minute) and 63 minutes when I called my dad’s cell, so I reckon the
connection fee (the fee that’s charged each time you use it) is A$1+.
That’s a ridiculous amount, so I don’t think this card is worth it
unless you buy higher denominations and plan to talk for a long time. 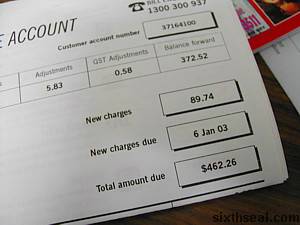