Well, now that the “catastrophic hard disk failure” (that’s the third time I used that phrase
today) issues has been resolved, I can write a bit about my day. I found this interesting drink
named Coffee Cola. 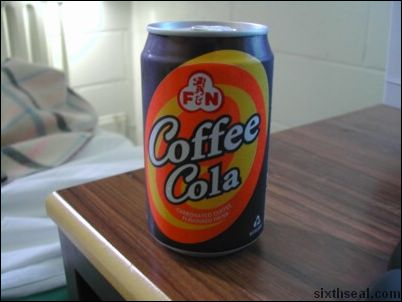 The lettering on the can suggests it’s made in Malaysia, but I’ve never seen this before in my
life. Perhaps it’s one of those “for export only” deals. The taste is…rather dismal, I’m sad to
report. It tastes like a cross between a cola sweet and a coffee sweet. In fact, the whole drink
tastes like barely carbonated melted sweets. Not very nice at all.

Anyway, I went to Doug Ellis Aquatic Center
[monash.edu.au] with Jimmy this evening. I just wanted to use their spa, sauna and steam rooms
but did a couple of laps in the heated pool since I have to pay for pool entry anyway. It was
chilly today and I was looking forward to some sauna action by the end of the day. The pools are
rather hard to swim in though because there are floating barriers (don’t know what it’s really
called) dividing each lane. This is because there are designated lanes for slow, medium and fast
swimmers. However, there are often more than 3 people in each lane, which makes swimming very
difficult. It didn’t bother me though, coz I wanted to use the sauna/spa/steam rooms only
anyway. =D There is nothing like walking into a steaming hot sauna after a cold winter’s day.
That sure felt good.