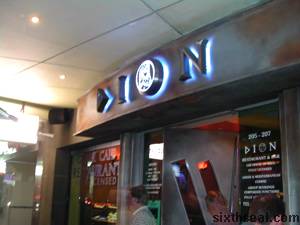 Happy birthday Karen! It was Karen’s birthday today so we got her a
cake and decided to go for some Greek food. We actually planned to go
to Antipodes but Dion
[dionrestaurant.com.au] was just two doors down and we haven’t eaten
there before. The Dion PR guy standing outside saw us standing in
between and contemplating which one to go to and immediately approached
us and invited us inside. He said Dion is an award winning restaurant
and we won’t be disappointed. Heh. Alright, dude. 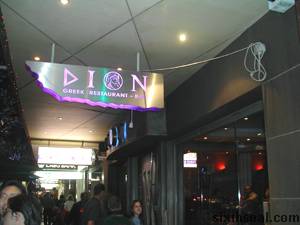 Going off on a different tangent it seems that a lot of restaurants
here have PR people (promoters?) standing outside trying to pull
customers in but I don’t see that a lot back home in Malaysia.
Interesting. Oh, I bumped into one of my old college friend while in
the city today. It was good to see him again, haven’t seen him around
for a while. 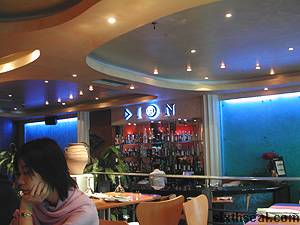 Anyway Dion has a really nice ambience, the lighting was great and
it’s a very popular place to eat. It was empty when we went there early
but it soon filled up to capacity. There were only two waiters and two
waitresses and but the service was still good. 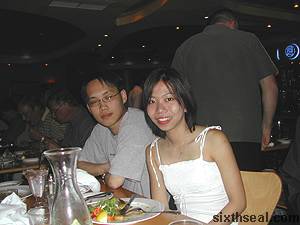 Karen (the birthday girl) with Ung Hing her bf

Oh, guess what I had today? Ouzo! [greekproducts.com] 🙂 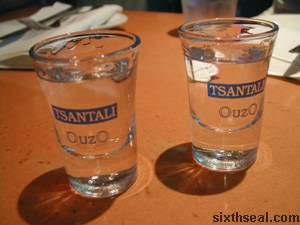 It wasn’t on the menu, but they had it (it was a Greek restaurant
and even the waiters and waitresses are Greek). Anyway, I ordered two
of those and downed them. It’s really, really amazingly tasty! There is
a strong smell and taste of liquorish and it’s very sweet and has a
very satisfying aftertaste. Very, very nice, if you ever see it around,
do yourself a favor and have one of these things. It’s so tasty it
ought to be illegal! 🙂 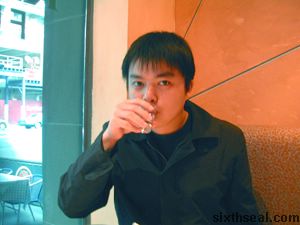 I could drink these things all day, but they cost A$6 each, which
wouldn’t be expensive normally, but I’m running short this month due to
having to replace most of my computer about a week ago. Delicious,
delicious stuff. Devine! I reckon you can get it at Greek bottle shops
too, there’s one in Clayton so I’ll pop in and check someday. 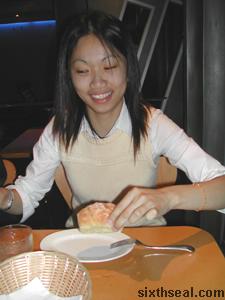 Thien Na showing us how to properly butter a bread. Apparently, just slathering it on top is not considered appropriate

Anyway, I’m digressing so much. Just don’t miss out on having this
if you get the chance. It’s absolutely amazing stuff. Well, four of us
had the dinner banquet and the others had the main meals. The dinner
banquet was really too much for four people, but it sure was
interesting. 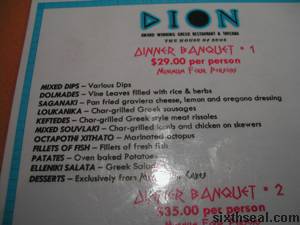 If you can’t read the menu from the picture, I’ve cut and pasted it from the Dion website. The banquet we had was: 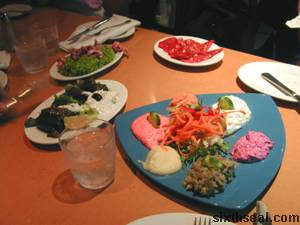 The dips were the most interesting thing. There was a purple dip, a
pink deep, a bizarre green dip, an orange one and a yellow one. At one
point, I was just eating the dip with a fork just for fun. They look so
interesting. 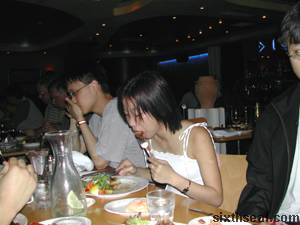 I’ve had heaps of dolmas before so I’m familiar with it. I used to
get it in cans, my lecturer in college is such a big promoter of dolmas
and got us into eating it. It’s good stuff, but the Dion ones beats the
ones of out the cans anyday. 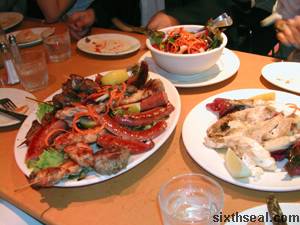 Saganaki was too cheesy, I didn’t really enjoy it, and I think no
one else did too. Loukanika is pretty spicy and that’s good but I was
so full at that time I only ate half. Keftedes wasn’t really anything
special…tasted like meat patties filled with herbs. The grilled lamb
and chicken was my favorite! 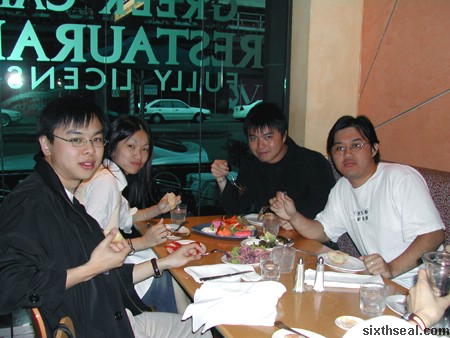 One side of the table: (from left) Chuck Fong, Thien Na, Huai Bin (me), Christopher 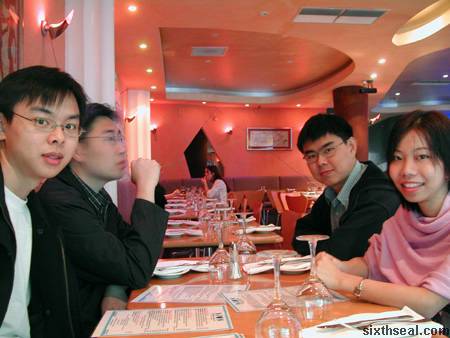 The other side of the table: (from left) Chuck Fong, Adrian, Chuck Yong, Karen

This is so bizarre. Ung Hing is missing and I don’t remember the seating was this way before.

The marinated octopus was great as well, but I didn’t eat much of
the fish and potatos. I’m more of a meat eater although I like fish,
just not in fillets. The Greek Salad was good as well, but the goat
cheese was a bit too hard. Eh, so I’m a food reviewer now, it seems. 🙂 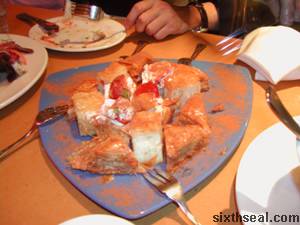 Okay, now the best thing is the desserts. It comes from Medallion
Cakes, a place three doors down, which serves the best cakes and
desserts in Melbourne. In my opinion anyway! They’re elaborate works of
art that looks almost too good to eat! 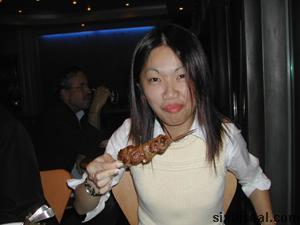 Well, Thien Na had to leave after the main course to fetch her bf to
go to Moomba and we got her to carry a lamb kebab with her. We left
soon after to go to Moomba as well, and that’ll be the next post. I
feel sleepy now but I’ll write it if I feel more awake later. It’s
probably going to be tomorrow though. Yeah, it’ll definately have to be
tomorrow. *yawn* Anyway, Dion is a great place, I’ll go again, if only
just for the Ouzo. Heh. It’s at Lonsdale St, I’m sure everyone in
Melbourne knows where it is, since it’s on such a prominent street. Oh,
funny thing was, we forgot to bring the cake out! We left it at Karen’s
house while waiting for her to change. Heh. Happy 22nd Karen! 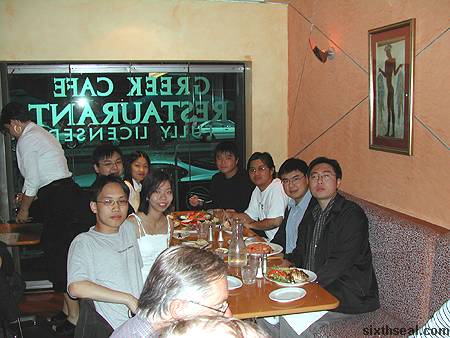 Did you know? That everyone is this picture was from Methodist High School, Sibu in 1998 🙂 They’re all my high school friends.