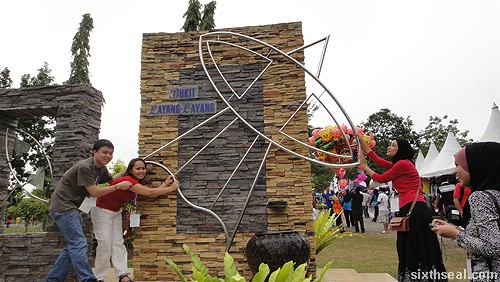 I went on this trip to Pasir Gudang in Johor to catch the World Kite Festival 2011 a few weeks ago. It’s called Festival Layang-Layang Sedunia 2011 in Malay and I was surprised to see a lot of international participants. I also witnessed an awesome 400 meter long kite being deployed (that’s almost half a kilometer) which is pretty impressive. 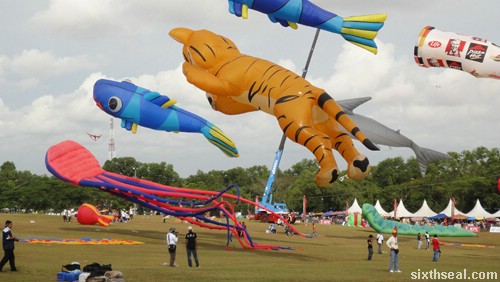 It seems that the Pasir Gudang World Kite Festival is a big thing amongst kite enthusiasts around the world. I’m amazed that people actually travel to Johor just to fly kites for a couple of days. I used to play with kites as a kid too but never really got into it. 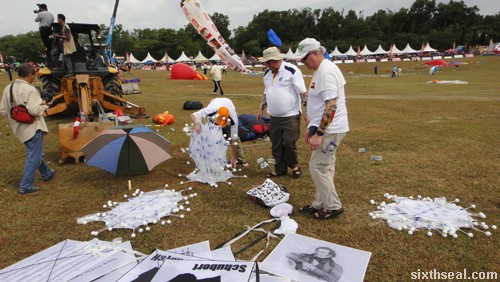 These people however are serious kite enthusiasts. I saw gravity defying contraptions being flown over the weekend and got a lesson on kites around the world while at it.

Here’s a video of the action at Bukit Layang-Layang. 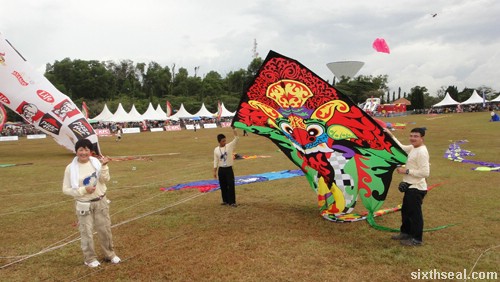 The passion of the international teams is infectious. I ended up talking to some of them, trying to understand their love for the sport. These are people who lug their kites from various countries to Malaysia just for a few days of fraternizing with like minded people and showing off their carefully made kites. 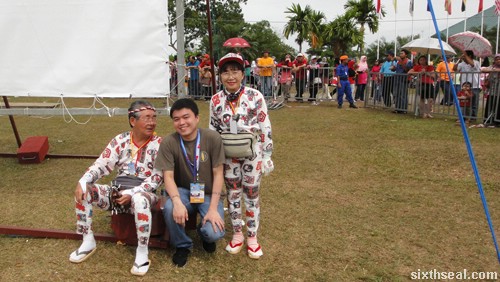 The Pasir Gudang World Kite Festival is held at the appropriately named Bukit Layang-Layang (Kite Hill) and it’s a tourist attraction which the government has capitalized on. A lot of hotels have promotions for this and there’s even a kite museum at the venue. 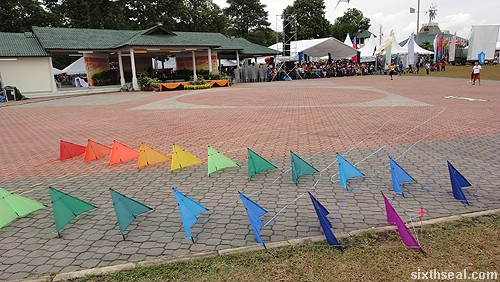 The kites come in every shape and size. I saw everything from giant alligators to statue sized clowns being flown. 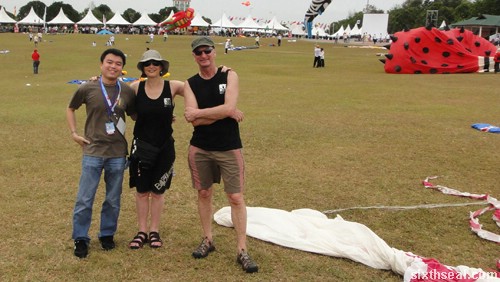 The larger kites require a small “pilot kite” to be raised before the actual kite can fly.

The pilot kite is a small parachute that gives enough lift to enable the main kite – in this case a gigantic squid by the team from Germany – to fly. It takes a lot of skill and effort to get this one afloat. 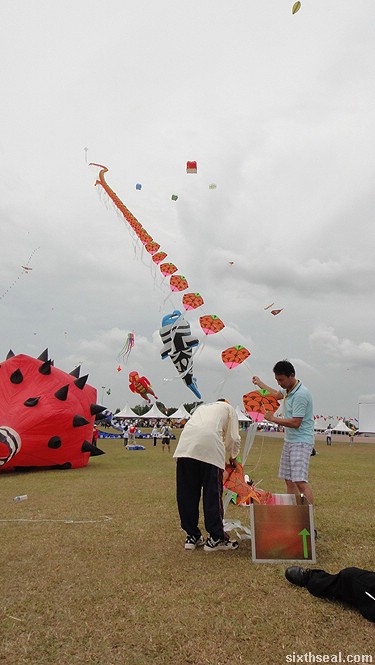 I found this one particularly impressive too – it’s a dragon kite that measures over 250 meters (!!!). This is from a team in Taiwan and there was a bit of controversy over which category in the competition it can go into.

I don’t know enough about the technicalities of kite classifications to comment, but based on the video, the organizers put them in the “line kite” instead of the “dragon kite” category due to some small design feature which violates the dragon kite specifications. 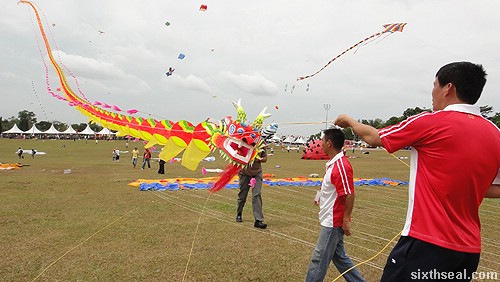 These type of kites takes a long time to setup and fly – it needs to be packed in a box and guided slowly out before the entire kite is sky bound. The longest one measures over 400 meters (!!!). That’s almost ½ a kilometer and it’s a wonder how they managed to get it up. It must be quite a task to retrieve it in one piece too. 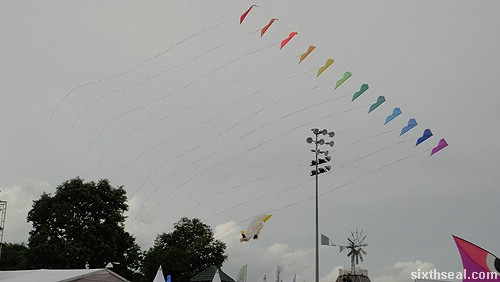 Here are some of the other kites that I liked: 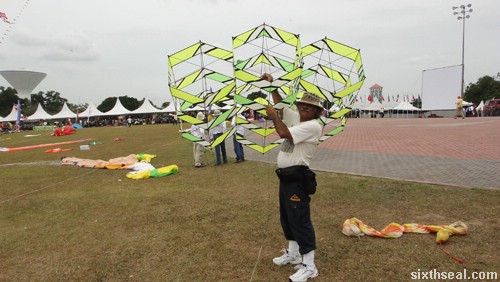 This is a box kite from Australia. 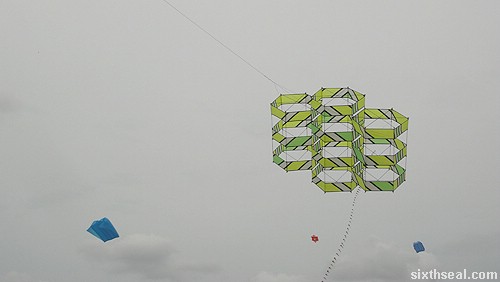 It’s hexagonal shape seem to go against every law of aerodynamics but they actually flew it quite easily. 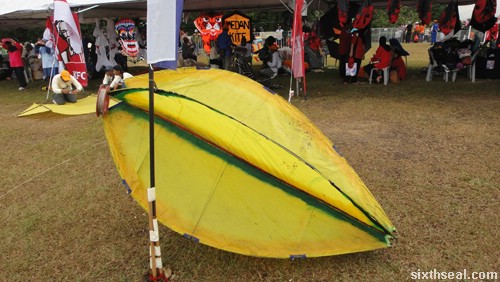 Our very own country also came out with a starfruit shaped kite. 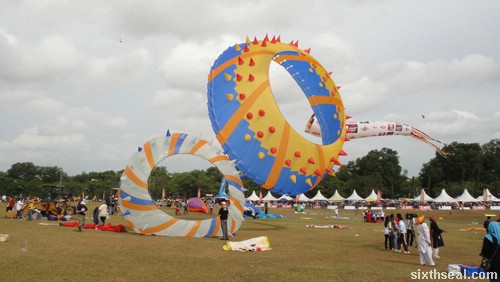 This is called a spinner – it doesn’t fly per se but floats and spins clockwise, thus the name. 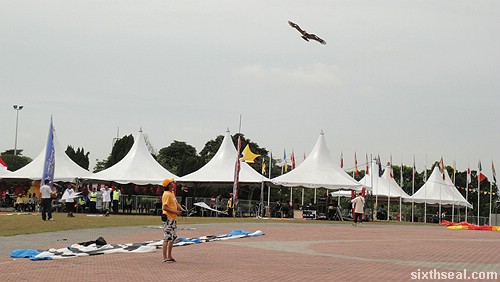 It’s a bird! It’s a plane! No, it’s…well, it’s not Superman, but an eagle kite that flies like a real bird. 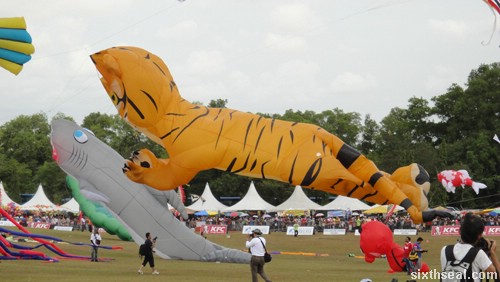 I saw this YouTube video of a dog totally owning a cat and now I can’t get that image out of my head. I had originally thought of this as a tiger pouncing on a shark but now it looks more like the large cat is about to forcibly initiate some inter-species coitus with the shark. It doesn’t help that the shark kite has a shocked expression on its face too. 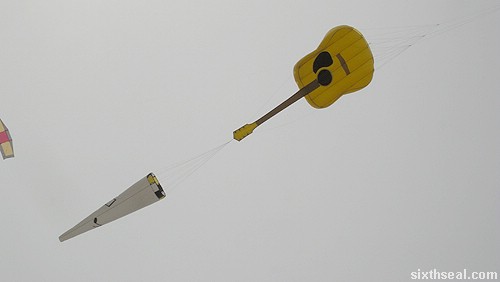 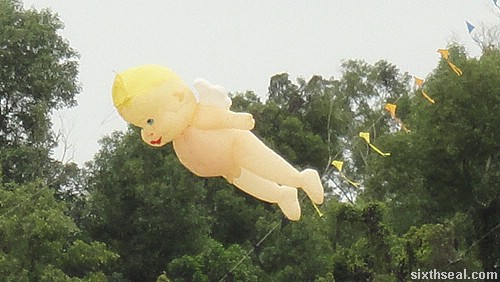 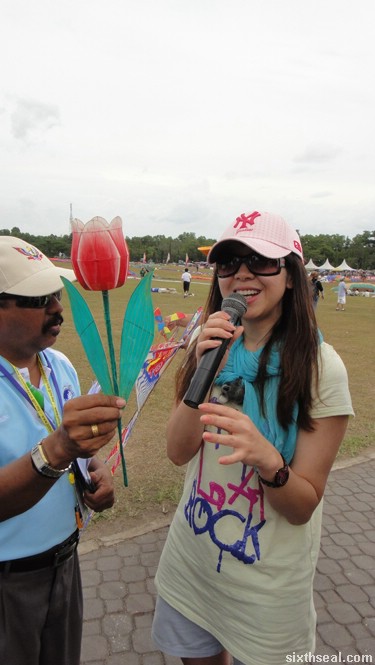 One of the girls in the China team has a rather improbable kite – it’s the tiniest one in the festival and it really flies. Yes, it’s the rose she’s holding in her hand. That’s actually a very small flower kite. Nifty! A rose by any other name is a kite. 😀 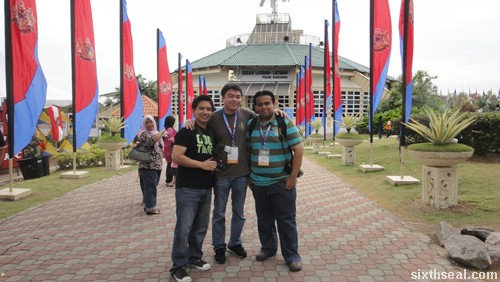 I went with Khairie and Mohd Zaid and got really sunburned over the weekend, but it was fun experiencing something I normally wouldn’t and talking to the kite enthusiasts around the world. It’s an insightful look into the kite flying subculture, one where even 86-year-old grandmothers fly all the way from Japan to participate in. 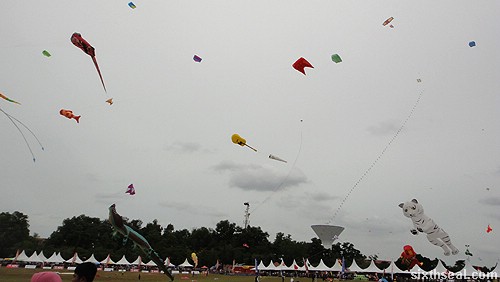 The Pasir Gudang World Kite Festival is an annual affair in Johor. They have a website with more information here. This is the 16th incarnation of the festival-cum-competition and it’s interesting to see people who are really serious about it gather from all over the world to indulge in their mutual passion.

Here’s another video of the scene at Bukit Layang-Layang during the event. 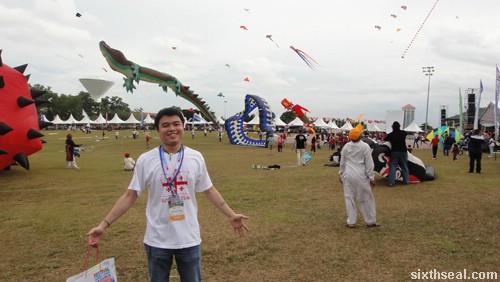 It has a very vibrant ambience and everyone was friendly and eager to help each other out. I thoroughly enjoyed the experience and the nature of the activity practically begs for a quote from the bestselling book by Khaled Hosseini:

…for you, a thousand times over.