1. How long have you had a weblog? I registered sixthseal.com sometime in April and my
first post was on the 19th of April 2002. That’s just slightly more than three months. =D

2. What was your first post about? It was a message saying sixthseal.com is officially live
and the story behind my domain name. It’s based on a Revelation passage. Read the entry here [sixthseal.com].

3. How many changes (name, location, etc.) of your weblog have there been, if more than
one? The major change that I made ever since I started was to put all the images in an
images directory about a week ago to better organize things. I also started the weblog with
the intention of it being a webcam page too, but unfortunately my university proxy does not allow
off-campus FTP connections, so that idea was nixed after a while. I still have my
Logitech QuickCam Pro 3000 [logitech.com] though. The webcam image has been replaced by a
Picture of the Day (look above) and a POTD archive [sixthseal.com] which
has the previous 7 days worth of Picture of the Days. 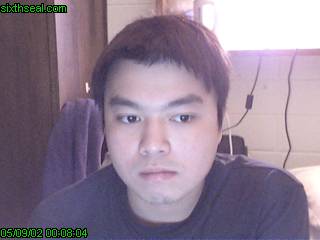 4. What CMS (content management system) do you use? Do you like it or do you want to try
something else? Plain old Microsoft Frontpage. I update my blog manually and FTP the files to a
Unix server on campus where I have an account. Then I have to SSH to the Unix server and FTP my
domain from there. This is because I don’t have direct off-campus FTP access. Everything needs to
be done through the on-campus Unix server. I’m not too happy about this arrangement since it makes
updating a bit tedious, but I’m stuck with it because I live on campus. I might look into some CMS
packages like Greymatter though. 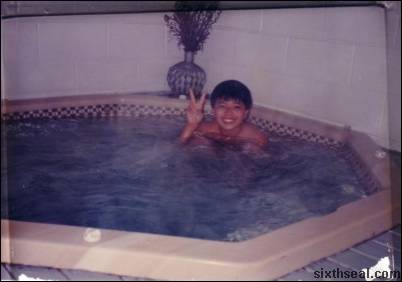 Since I seem to have forgotten to do last week’s
Friday Five [fridayfive.org],
I might as well do it now before the new one comes online in a couple of
hours. Better late than never. A saying that rates up there with “a gramme
is better than a damn”.

1. Where are you right now? In my room at my house in Sibu. Sadly,
I’m flying back to Melbourne on the 22nd of July, which is slightly more
than one week away. I always feel bummed when I’m about to go off, but at
least I only have one more year to go before I graduate.

2. What have you lost recently? My temper.

3. What was the first CD you ever purchased? Does that embarrass you
now?

“To the Faithful Departed” by The Cranberries [amazon.com]. Nah, I’m
not embarrassed of it, coz I still like them. My favorite song off that
album is Electric Blue. Funny fact: I bought the CD before I even had a CD
player. Heh. Unfortunately, this led to many jokes which goes along the
lines of:

Friend: Look at that Gameboy game! Don’t you like (insert game title)?

Me: But I don’t even have a Gameboy?

Friend: Nevermind, get it first and you’ll be motivated to get a Gameboy
then. *cackle*

4. What is your favorite kind of writing pen? The
Pilot
Pentopia Chameleon [pentopia.com] for the Palm m505. I carry my Palm
everywhere so that means I have access to a pen at all times. Even though
the shape is hardly conducive to serious writing, its very handy to have a
pen whenever you need one.

5. What is your favorite ice cream flavor?
Cadbury’s
Caramello [pbfoods.com.au] tubs. Sinfully delicious and deliciously
rich. I have been known to finish 2L tubs in a single sitting. Little
wonder I weigh so much ever since I left for Melbourne.

Well, I’ve decided to start doing this from now on. It’s a list of five questions for bloggers
to answer. It comes out every Friday, and I suspect that’s why it’s called the Friday Five [fridayfive.org].

1. …sent a handwritten letter? I send cards and letters to my girlfriend all the time
when I’m in Melbourne, so I’ll say about a month ago. I used to have heaps of pen pals when I was
in high school too, but I seem to have lost touch with all of them. I still remember I had a
gymnast pen pal called Su Yen. Still remember Joanne Lim, Daniel and Ting Chuan? Of course you both
do. 🙂

2. …baked something from scratch or made something by hand? I baked a raspberry mud cake
with my girlfriend last week. She did most of the work, but I, uh…helped to open the packs and
stuff. And I carried out the oven and beater from the store room. Heh. Of course, I helped to eat
it too. What can I say? South Korea vs Italy was on. I would have done my share of the baking
otherwise.

3. …camped in a tent? I think it was in 1997. It was before the SPM exams and a group of
us camped on the school grounds. It was very fun, we managed to do a mini human pyramid. Pretty
impressive considering none of us have done that before. I had my driving test the next day too, I
ended up not sleeping and went to the test quite blur. I did manage to pass it though. Here’s a
couple of photos from that camp. 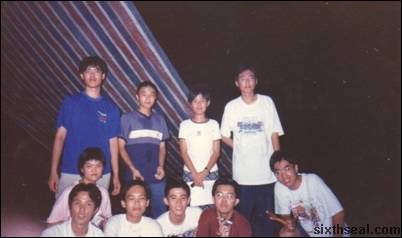 I have forgotten why my shirt is in such a sorry state. 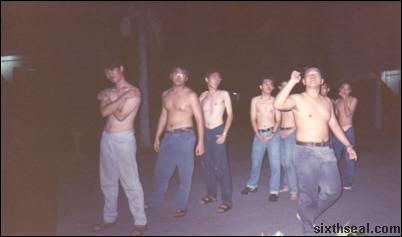 I apologize for subjecting your eyes to this photo. 🙂 Heh. I’m the one with the yellow briefs
partially showing (the last one). This was taken as we were about to go into formation for the
human pyramid. 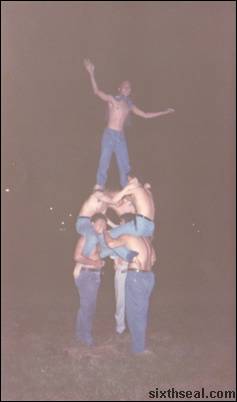 I’m the one at the top. Tied my shirt to my back for that Superman feeling. I had to hold my
hands out to balance myself because Ting Chuan (who was supporting me) kept on laughing for some
reason. Heh. Just seconds after this photo was taken we broke formation (we lost balance). Fun days
indeed. I shall leave out mention on whether any alcoholic beverages were consumed prior to this
attempt because this was on school property.

4. …volunteered your time to church, school, or community? I helped Wesley Methodist
Church to type in a list of the members into an Access database in 2000. Pretty gnarly work. It
wasn’t all altruistic though, I was more interested in compiling a personal list of, uh…the
better looking members of the congregation. Heh.

5. …helped a stranger? Hmm…I gave A$ 2 to a woman who approached me and my friend
outside Melbourne Central Station about two months ago. She claimed she needs to buy diapers for
her baby and she was pushing a pram. I had just left St Francis church, I went for their
Easter Mass, and was feeling pretty good, so I gave her some coins even though I highly doubt her
story. Does that count?