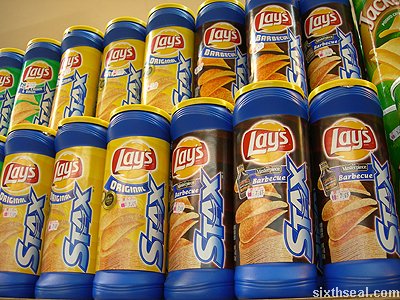 Lay’s crisps are some of the best potato chips in
the category. I’ve never really cared for crisps – I don’t like
Pringles or other potato chips…perhaps its due to the fact that I was
raised in Malaysia and Malaysian snacks have always been very
salty, compared to the low sodium and minimal (relatively) food
flavoring offerings in other countries – a point I’ve stressed numerous
times while I was in Australia. 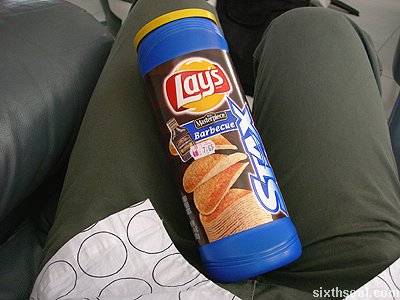 Lays crisps is big in the United States – it’s the #1 snack in that
market. Frito-Lay has partnered up with another food condiment company
to produce potato chips flavored with KC Masterpiece Barbeque sauce [kcmasterpiece.com]. It seems to be a trend in the snack industry as I’ve seen Smith’s crisps in Australia [sixthseal.com] partnering up with big names in the food condiment industry like Heinz tomato sauce while I was in Melbourne. 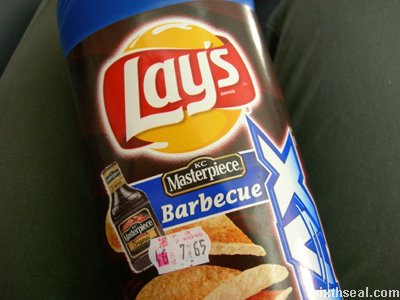 Lay’s came out with a new container called STAX that looks very much
like a standard Pringles can but it’s made of pliable plastic and has
an ergonomic easy grip (the top and bottom is extended out, leaving a
thinner middle portion). It’s a resealable crush-resistant blue
container and it retails for RM 7.65 per can. The range of Lay’s crisps
STAX is filled with a healthy repertoire of flavors – original and
other food condiment partnership flavors. 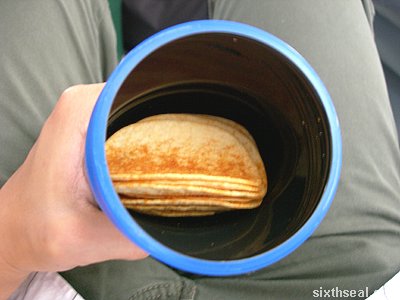 The product is actually made in Mexico instead of the United States
– just a little bit of (useless) trivia. Lays KC Masterpiece BBQ STAX
potato crisps “slides” out from the middle and each crisp is curved
perfectly with a healthy sprinkling of KC Masterpiece Barbecue sauce
seasoning in the middle.