I felt the need for speed today. Oh yeah, I did indeed. 🙂 I went Go Karting with a couple of my buddies today at Go KartSport Racing [gokartsport.com] at Moorabbin. 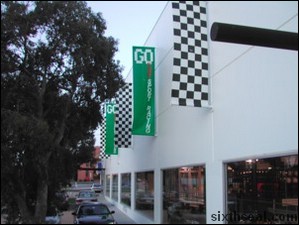 This is an indoor stadium at Chesterville Road, and it’s actually a
pretty big venue. It takes up one city block by itself and there is
ample parking at the back. The place looks good too, very cool decor.
The front entrance is made of glass and the race track is visible from
the front. The stairs are all metal and looks very industrial. 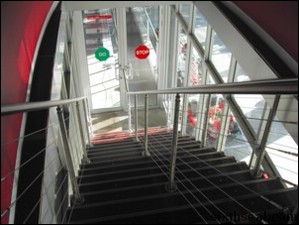 Very nice place indeed. Anyway, there was a total of 10 people in
our group, so we went for the Formula 1 style 2-race format, with a 10
lap qualifying session and a 15 lap main race. The 15 lap main race is
from a standing start, with the fastest qualifier at pole position.
Anyway, we suited up and put on the balaclavas and helmets. 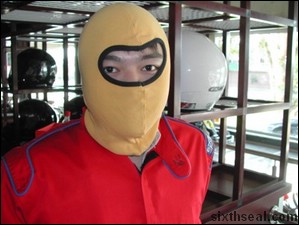 There was a short briefing about the kart’s capabilities and the
flags and then we’re off for the qualifier. I was the 6th in line, and
the first lap was done in order of starting position for the
computerized timing system to log each kart. I quickly got the hang of
things and started banking and drifting in the second lap to try and
catch up with the first few. Lucky for me, two karts in front of me
collided and I managed to nip past them. 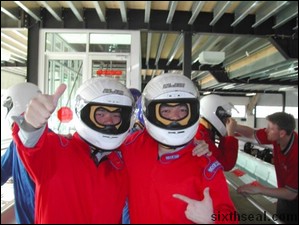 I passed the next guy by driving aggressively, basically staying on
his tail and harassing him coz the track was too tight to pass at that
point. I got my chance when he slowed down to make a turn. I stepped
hard on the accelerator and skidded past him. Woo hoo. Two more to go.
The next one was passed by an impressive (if I say so myself) but
rather reckless squeeze at a hairpin curve. Unfortunately, I couldn’t
catch up with the race leader and got 2nd in the qualifier. My fastest
lap time was 42.44 seconds vs Jun Kae’s 39.23 seconds, according to the
print outs. 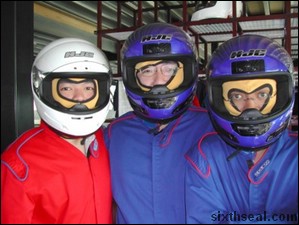 There was 20 minute break after that before the main race, and I was
determined to shave several seconds off my lap time and get pole
position next round. 🙂 I grabbed a Gatorade Frost and sat there
watching another group race. This wasn’t a good idea though, because I
hadn’t had anything to eat the whole day. True enough, I was hit with
really bad gastric pains before the main race started. 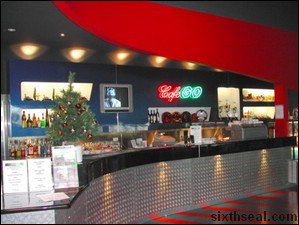 But I’m not going to blame that for my performance though. No, my
dismal performance in the main race was due to a mistake at the start
of the race. We suited up again and did a practice lap before being
lined up according to the qualifier results. I was in second place and
watched the 10 red lights start counting down, two by two. The green
lights came on and I was off. 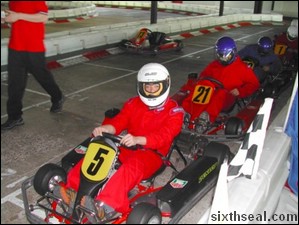 This is me inside the kart. Number 5 is an auspicious number. Don’t ask why, it just is.

I chased down the first kart down and tried to pass him at the first
curve. I was accelerating the hardest I could, true pedal to the metal
and I didn’t want to brake earlier than he did. He braked, and I waited
3 seconds before applying my own, intending to step hard on the brake,
steer hard against the curve and drift straight out of the curve. I’m a
big fan of drift racing after watching Initial D. Unfortunately, I lost
control and spun 360 degrees and watched 6 (SIX!!!!!) karts pass me by
before I righted myself. 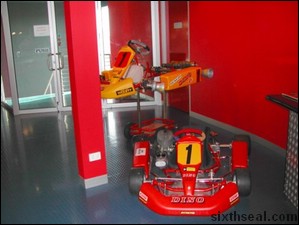 Mint go karts on display, with prominent Do Not Touch signs.

Damn it, now I really have to race hard to even get into top 3. I
immediately started going at it hardcore, and rammed into another kart
in an effort to pass him (further slowing me down, grr…). I got a
warning flag for that. I managed to pass one dude by taking the
disadvantageous outer line while going into a curve and another by
squeezing thru a crack, leaving only 1 mm between our karts. Okay,
perhaps there is some embellishment, but it sure was close. 🙂 Anyway,
I was still in 6th place at that point and there was this guy trying to
pass me by already. 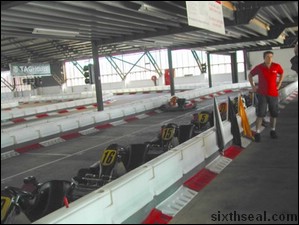 I (rather unsportingly) drove erratically to avoid him passing me
and tried to pass another guy myself. I nearly pulled it off, but it
resulted in another mini collision. I managed to compensate faster and
I was off again, in 5th place and 2 more laps to go. I really had to go
fast to catch up with the front 4 karts so I didn’t even use the brake,
which made for some really uncomfortable moments where I didn’t crash
only by the grace of God. 🙂 The grace of the almighty one is not
endless though, for I crashed into the barrier later, dashing any hopes
of ever catching up. I thought I was out of the race, coz I already had
two warnings, but the track monitor let it pass. There wasn’t enough
time to catch up with the front 4 karts, although I did try and nearly
passed one near the finish line. Didn’t happen though. 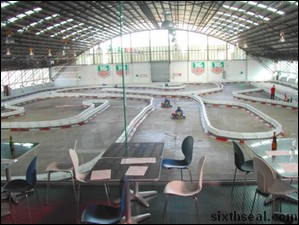 The track, as viewed from above at the cafe

Oh well, I blame it all on that mistake at the first lap. Grr… 🙂
I did improve my lap times though, I clocked in 38.13 on the fastest
lap and reached a max speed of 43.95 km/h. It was hard to drive faster
than that coz the lap is really loopy, not many straight runs. Anyway,
it was a fun day and Fu Liang produced a cake for Adrian at the end of
the session for his (belated) birthday.

Adrian with his birthday cake.

I just realized that we never did take a group photo. Anyway, the list of attendees are:

Those were the names from the results printouts. Apologies if I got anyone’s name wrong.