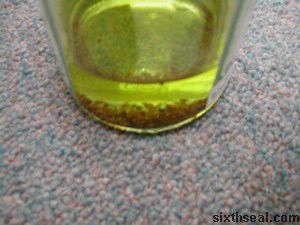 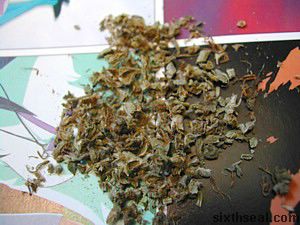 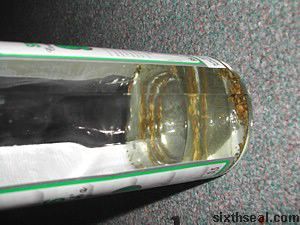 allowed to steep in the 95% spirit

Preparation: I shredded some cannabis buds into small bits
and put them in this 95% (190 proof) pure grain alcohol called
Spirytus. Yes, that’s 95% Vol/Alc. I think this is the highest amount
of stable alcohol you can have without it pulling moisture from the
atmosphere and re-diluting it self. This is similar to the spirit
marketed as Everclear in the United States. I got this bottle at a
Greek bottle shop near my place. It’s A$ 50 for the 500 ml bottle. The
cashier asked me what I wanted it for, and I said “to dissolve plant
material in” and he went “oh okay”. 🙂 Heh. 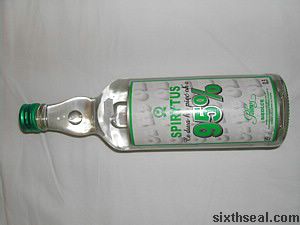 The front of the bottle – Spirytus

Anyway, I did drink quite a bit of the stuff, it really packs a
punch if you drink it neat. I usually pour some of the stuff into a
plastic bottle of diet coke and drink it. I learnt that this could be a
bad idea though, the grain alcohol is also solvent grade so it could
dissolve plastic. I’m not saying that it can, I really don’t know, but
it could. It easily rubbed off the blue use by dates on those bottles
anyway. It also tends to turn a chilled drink into a warm drink. Yuck. 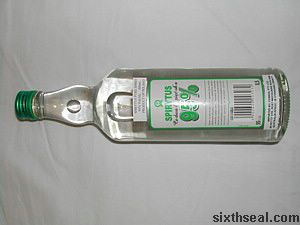 I’m digressing. Anyway, before I came back for a holiday, I shredded
some cannabis buds and put it into what remained of the bottle. When I
returned a couple of days ago, I noticed that the alcohol had been
colored a nice green by the cannabis. The cannabis has been left in the
bottle for a total of 5 weeks (and 3 days) so that should be sufficient
to allow the THC to leach out from the plant into the alcohol. I kept
it in a dark cupboard all this while and it turned a deeper green when
I shook the bottle. Anyway, I felt that this was a good time as any to
have a taste so I took a couple of shots in some diet coke on an empty
stomach. 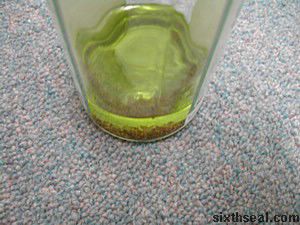 The result after 5 weeks (and 3 days)

Poured 3 1/2 shots into 300 ml of diet coke. It tastes EXACTLY like
what marijuana smoke tastes like when inhaled. nice. yum. I think the
alcohol dissolved some nasty stuff from the plastic bottles too…yuck.
it tastes chemical. Chugged it anyway

Feeling slightly stoned too, but the alcohol is masking most of the
good aspects of mj. can feel enchaced auditory appreciation but no
munchies yet.

ah feeling slightly stoned now. 🙂 good. but it’s a more relaxed
laid back kind of stoned though, not like the seriously stoned you can
get when you smoke bowl after bowl after bowl

it feels strange, but good. 🙂 i’ve had alcohol + mj before, in that
order. drank a six pack and smoked a couple of bowls and felt great
too, but this is somehow slightly different to that feeling. for one
thing i don’t feel so sedated i’m about to sleep. perhaps that coz of
the caffeine? had a couple of coffees before this too. it is a very
nice feeling though, very laid back and chilly. much more mellow that
smoking bowls but it’s fun too. not as intense, and you have to consume
a whole lot of pesticide while at it too.

Feeling wasn’t satisfactory so i pored another shot of the stuff
into a 500 ml can of beer and skulled it. i can smell the mj. mmm

feeling pretty good now. 1/2 drunkish 1/2 stoned but not a lot of
head fuck unlike when i’m stoned. it’s pretty mellow and nice though.
would go well with a couple of valiums but i’m saving my stash for a
rainy day.

yeah feeling nice. stoned and a little pissed at the same time. nice
nice nice. I’m watching My Wife is 18 – the one by Ekin Cheng and I’m
laughing myself to tears
haha
not so funny is the fact that i watched disc 2 before watching disc 1 though coz the files were mislabeled on the network.

Anyway, the stuff was good, but not as intense as I would have
liked. Perhaps I should have dissolved more cannabis buds into the
alcohol, I’ll do that next time. Note that you need a high proof
alcohol to dissolve the stuff in, coz THC is alcohol (and fat) soluble
but not water soluble, thus you’ll want a high proof alcohol like
Bacardi 151 or even better, this 95% stuff.