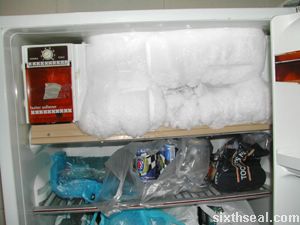 I can’t go back to sleep. Wanted to cook some breakfast but my
drumsticks were trapped! It’s been frozen into the freezer compartment
of the community fridge. The thing with the fridge is, it doesn’t close
properly anymore because the magnetic strip along the door has lost its
affinity for the ones along the frame of the fridge. Hah! I can still
think this early in the morning. I’ll be going to slops to grab
something to eat later.

I forgot how I got here, was surfing around and stumbled upon this
page. She mentions she’s from Sarawak on the page and I clicked to the
photos page and found the first picture familiar…looks like the YMCA
camp (at least I think that’s what it’s called) back in Sibu, but then
it could be any river. I then scrolled down a bit and saw the class
photo. Uniforms are pretty generic so I couldn’t be sure, but the two
people at the back with the jerseys have the Methodist High School
colors. And that’s definitely the Methodist High School, Sibu
administration office in the background. 🙂 AFAIK there’s not many Sibu
bloggers out there, so it’s a coincidence that I found another one.

Oh ya, I was doing some research for my essay and just for fun, did some Google searches:

[Edit: Deleted links. They were direct Google searches for variants of “dexamphetamine malaysia”]

Anyway, that’s going off on a tangent. We’ll now use dextroamphetamine instead of dexamphetamine in the search string:

[Edit: Deleted links. They were direct Google searches for variants of “dextroamphetamine malaysia”]

That pushes the site down to #3 on the returned hits.

Replacing dextroamphetamine with dextro-amphetamine returned only a single result, which is a mass news link site.

What is this long winded business about? It seems to suggest that
dexamphetamine is not approved for use or prescribed in Malaysia. Just
for fun I did some more searches and it’s not on the Malaysia National Essential Drugs List (.pdf file) [pharmacy.gov.my]. More importantly, it’s not on the Malaysia National Pharmaceutical Control Bureau (Biro Pengawalan Farmaseutikal Kebangsaan)
[bpfk.gov.my] database of registered pharmaceuticals. Surprisingly,
Ritalin (methylphenidate hydrochloride) is approved though. veritas,
it’s a good thing the doctor didn’t check. Your story about being prescribed dexamphetamine in Malaysia [sixthseal.com] wouldn’t have held up. Sing “Amazing Grace” or something. 🙂

Hmm…the lower right hand corner of my monitor seems to constantly flickering for some reason.

[Edit (7th April 2003): Deleted direct Google search links. The site was getting penalized for it.]