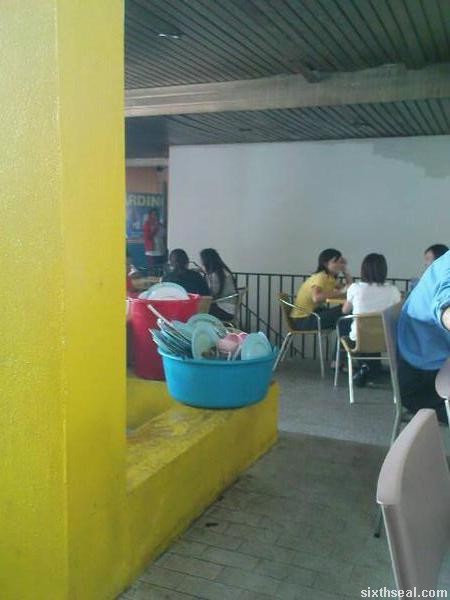 This has gotta be the highlight of today. We were having lunch at a mamak when this waiter started collecting used plates and bowls into a structurally unsound configuration which flies against all the laws of gravity. It’s an abomination! This Bonanno Pisano wannabe was just BEGGING for his hodge-podge construct to come apart.

It started wobbling when he walked over to our table.

I can see the look of consternation of his face, as well as a glint in his eye that suggested DETERMINATION to reach the dirty plate washing basin before it deconstructed.
He was fighting a losing battle and he shifted left, and then right in an effort to correct the wobbling structure.

His face started showing signs of dismay and horror as he realized he’ll never cross the finish line without it toppling over. The leaning tower of old soup, rice, and gravy from various people’s leftovers was just beside us at this point.

In a last ditch effort to do some damage control, he sharply veered right and let his body act as a splatter shield as everything came down.

It still got to us though. I was trying hard not to laugh coz his expression was PRICELESS. I wish I had videoed it but I didn’t know it was going to fall.

I still think it’s funny even though my left sleeve smells like old onion soup.