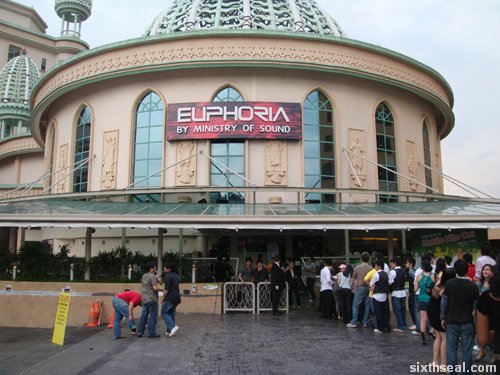 I went to the Kakiis Night Out event last night at Euphoria by Ministry of Sound. I think it’s the only non-smoking club in town. I went there with KY and Eiling as my team members. 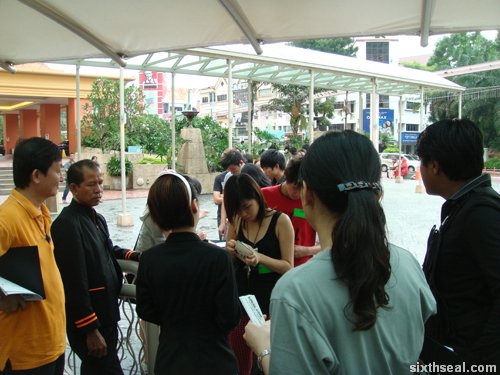 I am honored that the organizers felt my 27-year-old self worthy of an ID check for a free voucher of Carlsberg Draft…until I realized they asked everyone for ID. 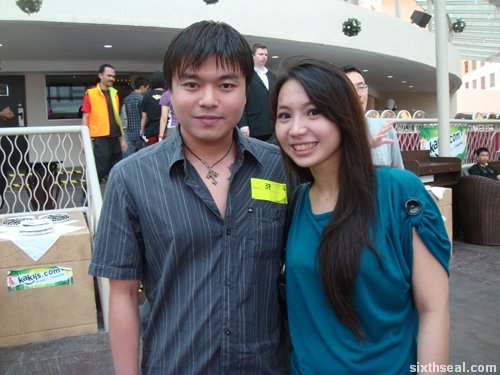 Pinky Tham! I less than 3 you! OMG, that was so random. Moving on. 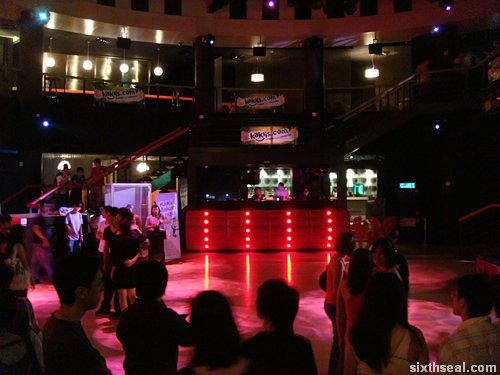 I haven’t been to Euphoria before but the place has a great sound system and excellent lighting. It’s operated by the esteemed MOS in London.

The Kakiis event kicked off with a performance by the Break B’Boys. They’re quite good at what they do and it got the crowd pumped up for the games. Kakiis Night Out has 10 booths with 10 games where you go and get footprints. DJ Steve from FlyFM was the MC for the night and briefed the crowd on the challenge. 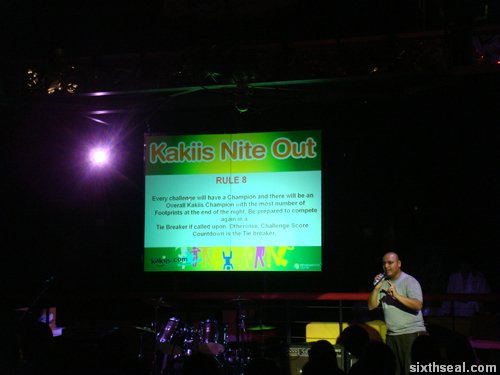 The games range from Kakiis Extreme (with electric shocks and dubious sea creatures and worms) to the more intellectual games like Kakiis IQ. You’re supposed to complete all 10 challenges. I didn’t go there expecting to win, but I was surprised (in a good way) that Eiling is rather competitive by nature and wanted to finish all the games. 😉 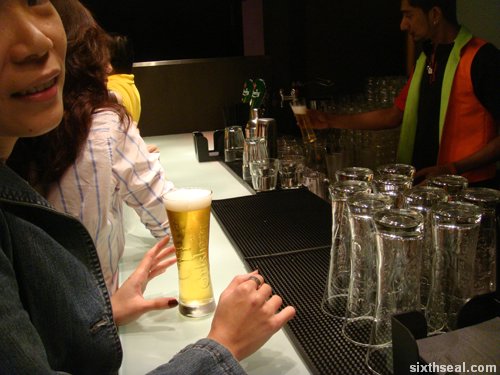 I wanted a drink before that though, I just had two and needed a bit more of the amber fluid inside me to be in the right frame of mind. I managed to bum quite a few beer coupons off random people. I didn’t know it wasn’t free flow or I would have started drinking at home first. 😉 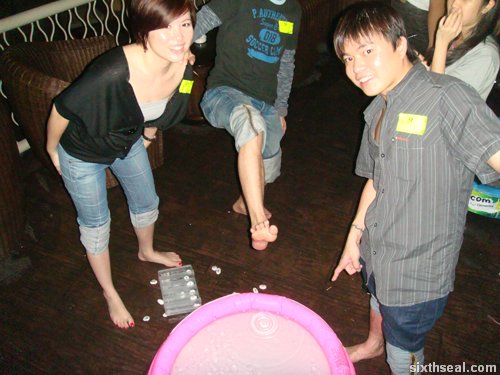 Meet Team 37! We actually won one of the games and walked away with a prize, which we didn’t expect.

The most interesting challenge of the day is the Kakiis Tornado where a blower blows pieces of paper around in an enclosed phone box type contraption and we grab the pieces from the air. We had to wear goggles – watch our team in action! 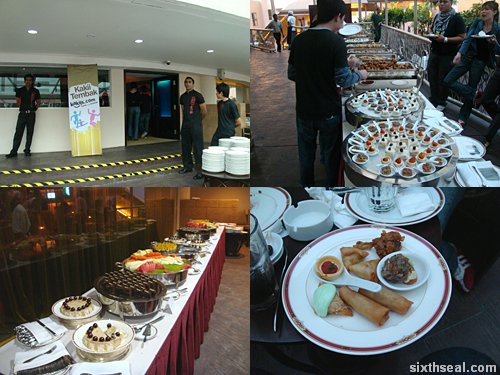 Dinner was provided and we stopped to grab a bite to eat before continuing the games. “Dinner” was mainly finger food without any substantial carbohydrates except for the cakes and desserts. Coke and other soft drinks were free flow but they ran out of ice at one point. 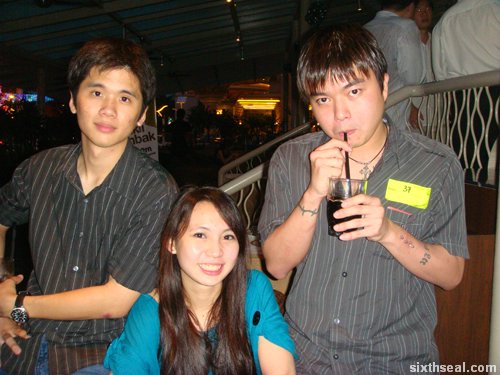 Me: Look Pinky, you have like two leng chai sitting beside you!
Pinky: Where? Where got leng chai?
Me: ….. 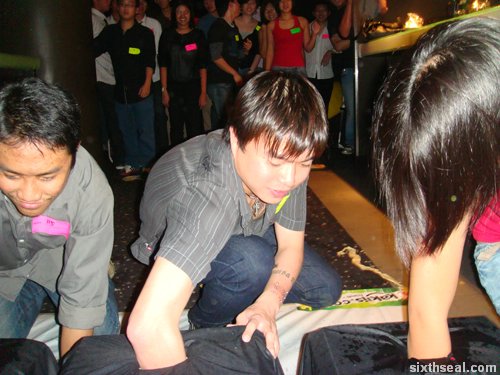 Anyway, we went back to attempt to complete the games after that. The more memorable is the one where you have to dig for coins in covered boxes. Two contains water and eels and the other two contains sawdust and sago grubs. There are four groups and each group of three people tag-teamed the way through. 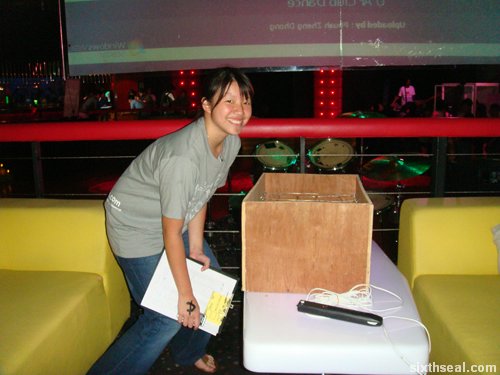 This is the game where we won (fastest time). It’s a contraption which delivers an electric shock with the two mesh wires inside. You have to reach through and grab a ping pong ball to spell out… 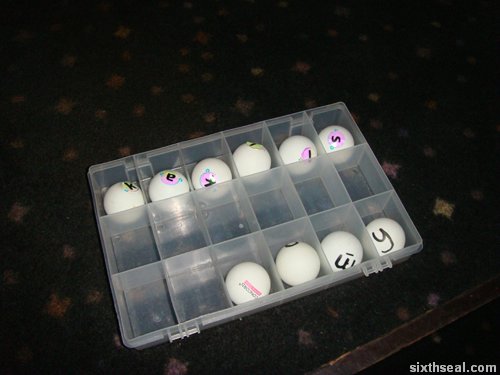 …KAKIIS. I got shocked twice, KY got it once and Eiling didn’t get the electric treatment. I think you need to touch both the wire meshes for it to deliver a shock. We thought we did pretty well on this one but didn’t think much of it. 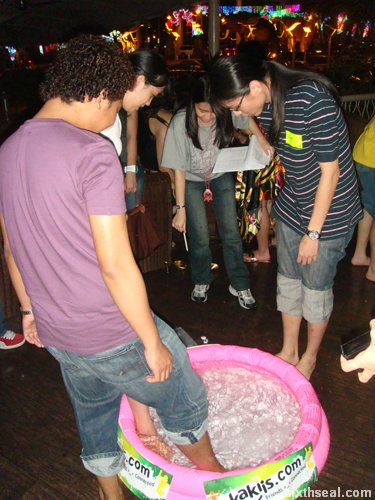 There was also a challenge called Kakiis Chill where you dip your feet into a small pool of ice-cold water and attempt to fish out ping-pong balls with your feet spelling KAKIIS. Fun. 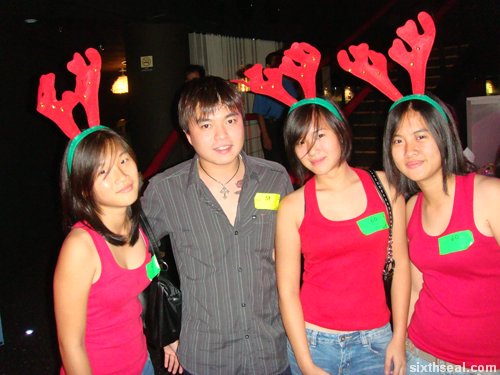 This is the best-dressed group IMHO – they were wearing reindeer antlers and matching outfits. They won one of the video awards too. 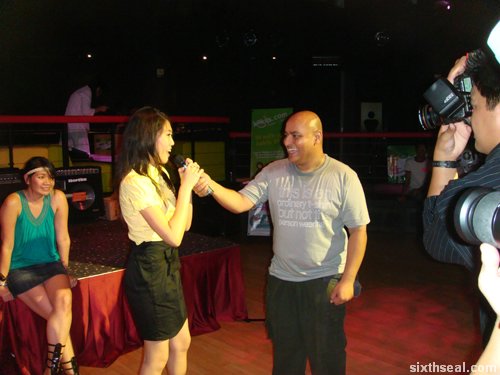 There was a yodeling competition going on at center stage while we were outside fishing ping-pong balls with our toes and everyone got a 16 GB Pendrive Sliq so our group immediately joined the next game…which was cat walking and showing off our kakis (kaki also means feet in Malay, wordplay on the social networking site).

I’m sure there are at least two compromising videos (and probably some photos as well) of me taking off my shirt and showing my beer belly (potbelly?) for all and sunder to see. I was about to start taking off my belt too before DJ Steve from FlyFM shook his head. 😉

Our team won the Kakiis Shock challenge though. I think we all knew we had a chance and looked at each other before the winner for that challenge is announced…and true enough it was Team 37! 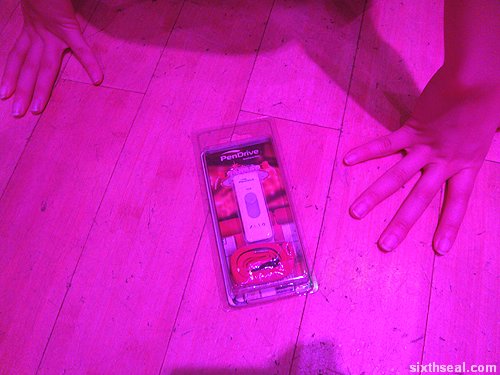 We each snagged a 16 GB Pendrive Sliq for having the fastest time in that challenge. Team 37, FTW! 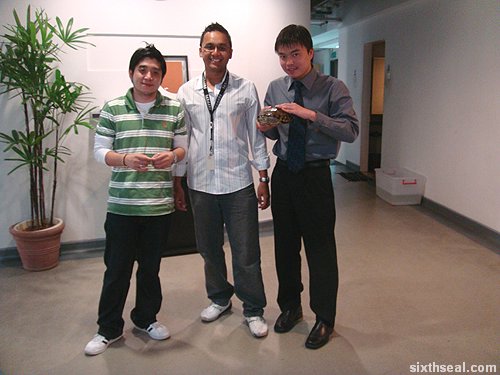 I have just moved over to KL to work and noticed a disturbing correlation in the shrinkage of my circle of friends. I left my kakiis in Sarawak and I need more kakiis in KL. Fate works in mysterious ways though, and somehow, I managed to hook up with a great bunch of guys…and a terrapin.

It’s like meeting up with kindred souls, which I didn’t think was possible in the short amount of time I have spent here. Do you have a Kakiis Experience (TM) like this? 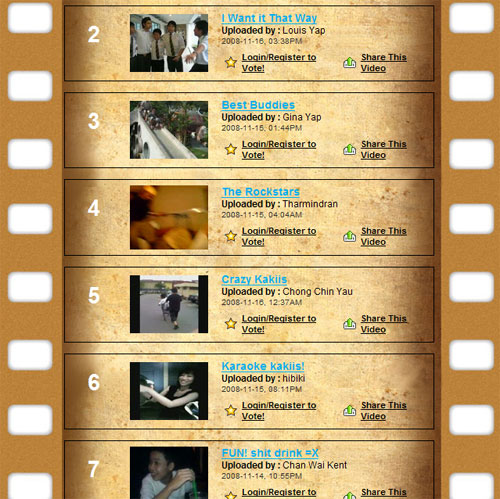 Kakiis is running a contest where you can send in a home video of you and your best pals hanging out. The site already has videos of friends singing karaoke, goofing around and generally chilling out together.

The prize of a MacBook Air and 4 x iPod Touch is up for grabs in the video contest, so send in your entries. It doesn’t matter if it’s filmed with a cell phone or a professional video camera, it just needs to be below 10 MB and show you and your friends hanging out. 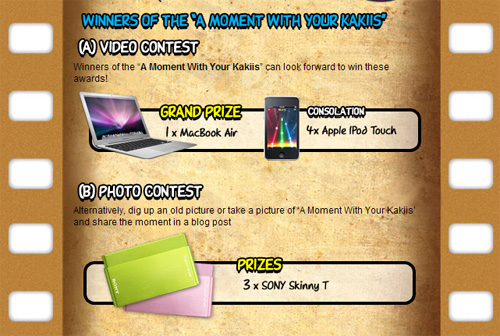 There is also a photo contest running where you can snap photos of your buddies and blog about it to stand a chance to win the sleek Sony Skinny T digicam. There are 3 of them up for grabs. I have been eyeing this one for a while – I own most of the Sony T-series digicams, all procured this year. The T-2 was…er, misplaced during a clubbing session, the T-70 fell into a waterfall and I’m using the T-300 right now.

You also get a chance to go to an exclusive invite-only party – the Kakiis Night Out on the 13th of December 2008 if your photo or video is voted in the Top 50. The contest starts from the 10th of November 2008 to the 5th of December 2008. Start participating now by logging on to the Kakiis Contest site.

I have registered as a member of the site and instead of calling up random people to get my social circle back to a healthy magnitude (circumference?), I would have been much better off hitting the local social networking sites like kakiis. 🙂