I have sunk to a new personal low. Please do not read any further
unless you’re prepared to be disgusted. The left side of my work table
is the absolute dirtiest surface area in my room. This is because – I
eat takeaway food there. I smoke there (ashtray is located there). I
store packs of (opened) chocolate/candy there (for my weed related
munchies). I put coins there. Receipts/bills/returned
assignments/letters etc goes there. You get the drill, it’s the
“everything there” part of the room. I took a single foil of meth out
from my stash. The foil is pre-weighted to 100 mg and packaged
individually. I unwrap the foil and put it on the left side on my desk.
I reached for my straw. Except there was no straw. Where did my straw
go? I searched my stash drawer, went through everything, but nope, it
wasn’t there. I searched the left side on my desk, flipping up letters,
bills, chocolate bars and the opened meth foil. Yes, the unwrapped
foil of meth! Oh, it flew everywhere. The “landing zone” was an area of
approximately 3/4 meter by 1/4 meter. It wasn’t pretty, I’ll tell you
that. I’ll like to say that my reaction was limited to saying “Oh, what
bad luck”, dust everything into the rubbish bin and get another foil
from the drawer. 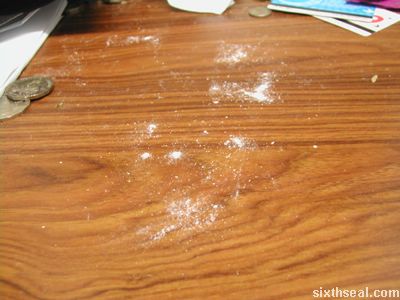 It wasn’t. Instead, I dusted everything into a “working pile”. The
name alone suggests what I intend to do with it. Keep in mind that the
meth was salvaged from things as varied as the surface of a 50 cent
coin, the wrapper of a large Cadbury chocolate bar (the 250 g size
ones), a receipt from Coles, an odd piece of cardboard that I’ve never
seen, Metcards (public transport tickets) and a A$10 note to name a few
things. The remainder (which wasn’t on top of something) was merged
into the working pile by moving everything out of the way and scraping
the table with a card. I nearly retched while writing that sentence,
for reasons I’ll go into in a second. Anyway, the moving everything out
of the way bit is why the picture above shows a rather empty table.
It’s usually ultra-cluttered.

Now I have a pile of questionable things which I call the “working
pile”. The pile was not consistent with the volume a point (100 mg) of
the meth I get would look like. I’ll say it was about 1/3 of 100 mg,
which meant I lost quite a bit. I can see some bits on the table still,
but those are in areas which are very dusty and dirty (which was what I
meant about retching). I did scrape over those parts anyway. 🙁 In my
defense, I worked around the most disgusting areas while scraping and
wiped the really dirty ones which had a bit of meth of it with a wet
cloth before I get any funny ideas. After that, I got down and went to
work on the “working pile”. I used the side of the card to separate the
“working pile” into two piles – “maybe meth” and “probably meth”
(cheers BigTrancer!). The “probably meth” consists of
relatively large shards of crystal and smaller bits which has a
translucent quality and looks like meth. I had a second bit of bad luck
when I dropped one of the largest shard on the carpet, but even I’m not
ghetto enough to go looking for it. :p

The “maybe meth” is what the rest of the “working pile” contains
after the “probably meth” filtration (this is too good a word for it)
was done. I insufflated the “probably meth” pile and went to work on
the “maybe meth”. It burnt much more than usual. These are among the things I found in the “maybe meth” pile:
Cigarette ash
Chocolate bits
Biscuit crumbs
Lint
A short hair (I’m getting rather put off at this point)
Piece of shredded cannabis bud
Unidentified brown gunk
Coagulated white stuff which I don’t want to speculate about
As you can see the left side of the table is not clean!
I shudder when I think about the takeaway meals eaten here and the
resulting stains (ugh). Anyway, after the above adulterants were
removed, the remaining “maybe meth” still doesn’t look quite right.

Well, I sat there pondering about the health consequences of
introducing the nasty things (and probably plenty of bacteria) that
reside on the left side of my table to my nasal membranes and I decided
that it won’t be a good idea at all. I ate the “maybe meth” pile. I
figured my stomach would be able to handle it better than my sinuses. I
feel so dirty and depraved. You can shake your heads in pity and go
“tsk tsk” now.

I’ve been told that last bit plenty of times anyway. In fact, SY just used it yesterday, also regarding me and meth but in a different context. 🙂 The good thing about today is: 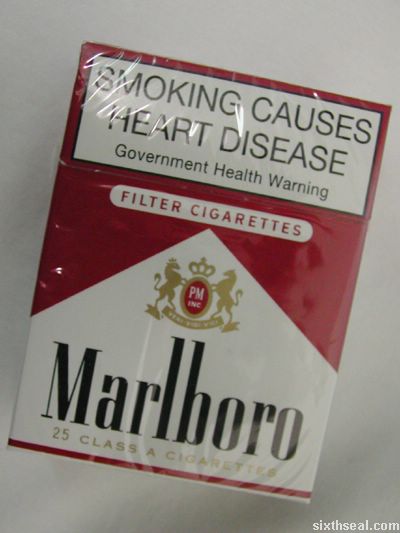 I know. You don’t have to remind me every time I reach for one

I don’t have to use nicotine gum anymore. =D I ran out of cigarettes
yesterday and had to resort to the gum, which staves off the nicotine
monster running though my blood, but not the one in my lungs. No smoke
= no satisfaction. Oh, and some important things I want to share:

Please be careful and respect every substance.
I don’t have time to go through specifics, but I thought I was gonna
kick the bucket yesterday. I took way too much dexamphetamine and
methamphetamine last night and it fucked me left, right and center. I
was gang raped by the two and it wasn’t pleasant at all! I felt like I
was going to have a stroke, heart attack or a brain aneurysm and
possibly all three.

Please take care when you use urinary alkalinizers to potentiate (meth)amphetamines!
The way they work is by reducing the rates of elimination of
amphetamine type substances from your body. This makes re-dosing
dangerous, especially if you take high doses for prolonged periods of
time. I took most of my script (a stupid thing by itself) and some
meth, didn’t drink much water (in a stupid effort to further prolong
the action) and held my urine for very long periods of time (I only
went twice over 36 hours – another stupid effort to make it last
longer). I believe that all the above and the frequent re-dosing led to
a dangerous buildup of amphetamines in my bloodstream. Urinary
alkalinizers will lead to a buildup in your bloodstream because it
reduces the rates of elimination. Time your re-dosing well, and
consider reducing your subsequent doses to compensate for the buildup.
I didn’t even notice it until I jumped 3 feet out of my chair when A
PIECE OF PAPER dropped from the desk and made a tiny swoosh sound.

I was feeling extreme pressure in my head and I had this bright spot
of light in my vision which I think is related to pressure behind the
eyeballs. Other manifestations were constant dizziness, head rushes
after slight exertion (like moving your arm) and while urinating (not
the good head rushes, these are the ones that feels like your skull is
about to explode), very prominent chest pain, extreme difficulty in
breathing (had to really strain to get a breath of air and even then it
didn’t felt enough), a high heart beat that I could hear (feel?),
swollen and freezing hands and feet that looked grey with very
prominent and bulging veins (even the small ones, they aren’t
noticeable usually), and the worst of all – random jabbing pains. The
pains are sharp but short and usually around the hands and feet. I’ve
had these symptoms a lot of times before, it’s all part of the fine
line us tweakers straddle when we push the limits. However, every
person’s body is different and I urge you not to sniff and say that’s
just amphetamine overdose symptoms, especially if you have existing
hypertension or heart conditions.

This is because of something I’ve noticed which I’ve confirmed by
reading medical articles (forgot the links, but please search if you
want references). The thing I’ve noticed is – I cannot do long runs
anymore, it’s fucking impossible! The substance is not the limiting
factor, but the negative reactions are. I always don’t eat and drink
little while tweaking and that used to be fine. It still is fine. I’ll
be honest here – I use much more frequently than I admit to. It’s not a
“weekends only” thing by far. It would be better described by the word
“cycle”. I also tend to go for high doses, re-dose often, use
alkalinizers and other physical tricks like little water intake, forced
urine retention etc. All the symptoms I describe above starts happening
at shorter and shorter periods. It first started to appear at the end
of a 6 day meth run.

Now, the symptoms are starting to appear sooner and sooner – 5 days,
4 days, 3 days, you know the drill. My runs are the no sleep, no food
and no other substances except stimulants type, so that could be part
of the reason. I don’t exceed 3 day runs now, because I can’t! That’s
the only cycle I can sustain now – 3 days on/1-2 day(s) off/3 days on.
It’s not for the lack of trying, the symptoms get progressively worse
and worse until breathing take up most of my energy and the chest pain
becomes to prominent, it makes work impossible, so what’s the point of
tweaking then? I’m concerned that this means that there’s some sort of
permanent damage being done…I have existing hypertension (high blood
pressure) and that and the urine alkalinizers might be the reason why
it hits me so hard. I’ve been reading about amphetamine induced
pulmonary hypertension – if you get this lovely condition, the average
time till you buy the farm is quoted as 1-3 years. Speed/meth puts a
lot of strain on your body. Please be careful out there, if you’re
taking high doses with frequent re-dosing/using urinary alkalinizers as
potentiators/have existing hypertension or heart conditions. Do the
drugs, don’t let the drugs do you, eh? 🙂

Now if only I would take my own advice…

P/S – I found that taking a high dose of benzodiazepines (I took
clonazepam) seem to lower your blood pressure and eliminate most of the
symptoms. Don’t take this as medical advice though, it’s just personal
observation. Also, by “high dose”, I mean a definite hypnotic dose –
one that will surely put you to sleep. I would also eat before I sleep,
cannabis works wonders.

I just realized that (meth)amphetamine is one of the things which
tends to lead to the utilization of multiple substances to effectively
manage the side effects – or as the anti-drug people like to call it,
“poly drug abuse”. That might be a cause of concern for some people, so
take care everyone!

Related link: Guide to coming down off meth and speed [sixthseal.com].