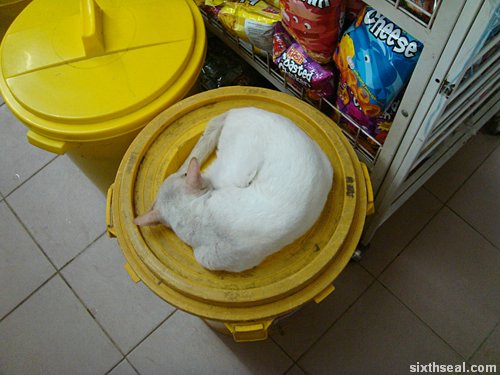 I saw a cat today at a grocery shop – it was very tame, sleeping on top of a plastic bin. I fondled, er, I mean caressed it and it didn’t flinch or even move but just gave a lazy meow. I love cats like these and it got me thinking about getting a cat. I have been deprived of feline company for too long.

I went to a pet shop and saw a Persian cat I really liked. I love her personality, she’s affectionate and playful, jumping at my fingers when I played with it and biting it (not seriously, just playfully). I love that cat and would have bought it home right away but it was going for RM 1,300 which is a little too high for my budget.

I’m still thinking about the cat right now. It’s very nice and her greatest asset is her playful and affectionate personality. She would make great lolcats posts. 🙂

I love cats and I want to get one to put in my room. I’ll give it a litter box and find a lint remover to get rid of the fur she’ll shed on my clothes and sleep with it. RM 1,300 is a bit steep though…so I’m thinking about other options.

I want a cat, it would make me less lonely. 🙂

A feline companion, so to speak. I hear it does wonders for depression and mood swings too. 😉 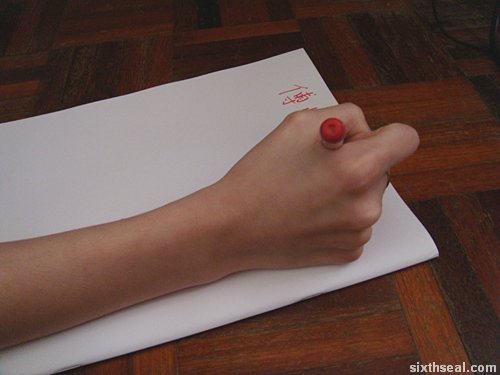 This is my Chinese name as written by Melody. I don’t know how to write my own Chinese name except for the middle character (coz it has less strokes and thus, is easier to remember). The translation is “Fu Huai Bin” – pronounced “foo why bin” but it’s written as Poh Huai Bin officially coz that’s how the Heng Hua translate the Chinese character for “Fu”.

Poh (the first character) is my family name a.k.a last name. It’s inherited and does not have any significance to it. Someone told me a very interesting anecdote about family names though – he said that we don’t actually have family names. A long time ago in a galaxy far, far away (actually, just Ancient China) we only have one name e.g.

Those are feudal times, so the lesser ones amongst us went to work for the richer (land owning) ones. Let’s say that I was born in a very poor family and went to work for a landowner named Poh. Back then, it wouldn’t be a 9 – 5 job but some backbreaking Biblical toil and labor stuff. 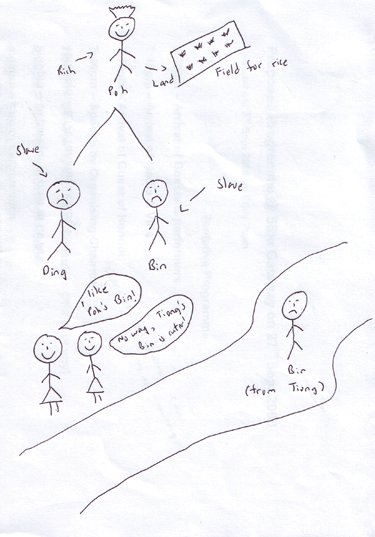 Now, there are probably a lot of Bins out there so I’ll be called Poh’s Bin – to avoid being confused with, say, Tiong’s Bin. Thus, my name will literally be “Poh Ah Bin” e.g. The Bin from The House of Tiong.

Once, I’ve made it big and have my own property, I will have my own plot of land and have slaves working under me e.g. Fong, Tang, Ching, Hong. Tang will be called Bin Ah Tang “Tang from The House of Bin“. 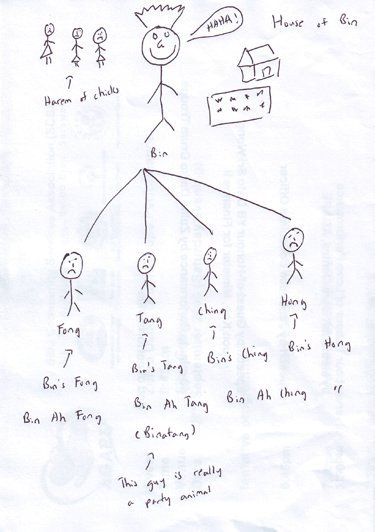 Over the years, we evolved with the times and started getting customized names. However, the Chinese never dropped the surname (family name) so the ones that are in current circulation were the rich and land owning folks from the feudal times.

I don’t know how historically accurate the anecdote is, but it’s quite interesting nevertheless. Anyway back to my name, the Poh doesn’t actually mean anything – it’s the family name/last name so my name would be Huai Bin. 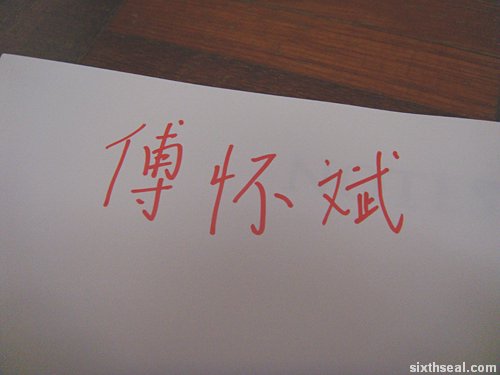 so my name is The Caring Scholar-Warrior from The House of Poh.