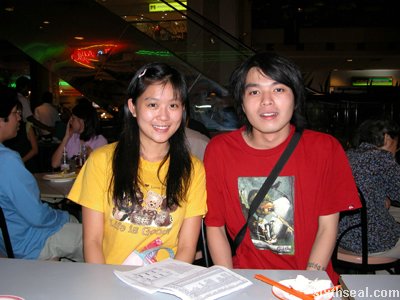 I went to Crown Square just now to meet up with Hau Ee. She’s from
Sibu as well – I remember a bunch of us going for supper at Taman
Harmoni the previous time I was back home. Anyway, she told me she’ll
be in Kuching for a couple of days and I’ve been meaning to get the
discounted cell phone reload cards off her, so off I went. From what I
understand, it’s an annual commitment for pre-paid cell phone cards
(across all mobile operators in Malaysia) where you choose the plan you
want (according to your cell phone usage needs) and you get the coupon
codes every month at a highly discounted rate.

I’m not sure if I got that exactly right…she explained the plans
to me, but I was so scattered today that I could hardly comprehend what
she said. It’s Sunday today and that means it’s the last day of my
high-intensity weekend warrior run. High-intensity runs (constant and
compulsive maintenance of peak plasma concentrations, no food,
dehydrating conditions) tend to deep fry the brain towards the end.

It also didn’t help that I consumed massive amounts of clonazepam,
nitrazepam, alprazolam and lorazepam to chemically accelerate hypnotic
activity so I could turn in earlier tonight. The benzodiazepine
combination hit me harder than I expected, though I wasn’t aware of
that, and placidly cruised to town while downright sedated. I only
realized that my reflexes were impaired when I nearly drove up a curb
while making the U-turn that I take everyday and skidded (it was
raining and the roads were slippery) after going into a corner too fast.

I made sure that I was ultra careful after that and reached the
destination and back without any vehicular collisions. Heh. Anyway, I
reckon this spot is where I’m supposed to insert the obligatory harm
minimization message to urge people under the influence to avoid
driving. 😉 Well, like I said, the combination made me scattered and
higher level thought processes were affected so I had a really hard
time understanding how the discounted pre-paid cards work. 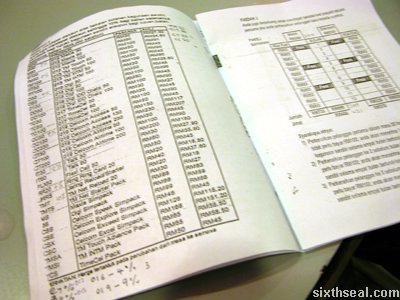 Anyway, I finally gathered that there is an upfront fee (the annual
plan rate) and you can resell the reload coupons that you don’t use to
someone else e.g. you can sell the unused ones if you didn’t make a lot
of calls that month and thus have surplus cards. It sounded like a good
idea, except that I don’t use my cell phone all that much, and I’m too
lazy to sell any remainder cards to other people. 🙂

Thus, I didn’t go for the annual plan and just got a RM 50 Digi
prepaid coupon off her. I still have credit in my cell phone, since I
usually make outgoing calls from my house phone. I don’t remember the
last time I reloaded my cell phone, but it was barred today coz the 3
month validity period was over, so I can receive calls but not make
outgoing calls. The system Digi uses allows you a fairly long grace
period and you don’t lose the existing unused credit you had before the
validity period expired.

The existing credit is just stacked back on when you reload, adding
the balance to the new value. The validity expired today, so I just got
a single reload coupon off her, instead of opting for the cheaper
annual plan, since I don’t use my cell phone that much. I still need to
reload though, since a phone that doesn’t allow outgoing calls rather
defeats the purpose of having a cell in the first place. 🙂 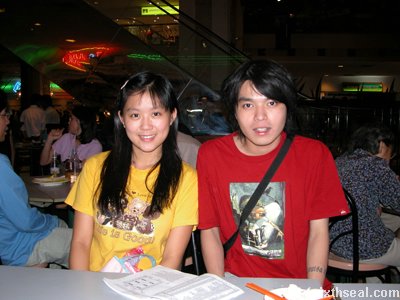 Excuse me, dear readers…I’ll have to reply the comments tomorrow. Sleep beckons me…