*sizzle* Help, I’m burning up. Melbourne hit a record high temperature
[theage.com.au] in 64 years – it was 43.9 degrees Celsius today. And
man, did I feel it. I went to the city today and I lost more water than
I could drink to replenish. People were going around shirtless and in
bikini tops, and the heat in the train carriages was simply oppressive. I felt like I was either going to melt or spontaneously combust. 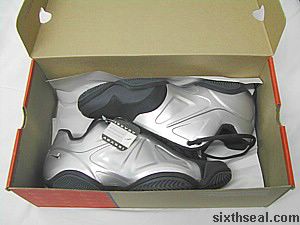 Anyway, I managed to get a pair of shoes today. I don’t usually go
for Nike, but I was seduced by the air-conditioned comfort of their
store in Bourke Street. I ended up buying a pair that caught my eye –
Air Zoom Courtposite. It’s a pair of tennis shoes, I don’t play tennis,
but who cares, my previous pair was supposed to be for squash anyway. 🙂 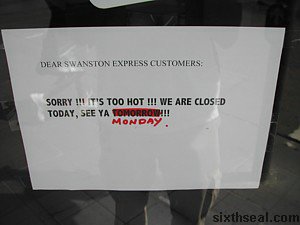 Look at this, I saw it while walking down Swanston Street. This was
pasted on the door of China Express, a takeaway Chinese food place. Heh.

Well, while seeking refuge in the air-conditioned comfort of a book
store, I also saw this new (?) calling card called Planet Telecom
Australia that is only 3.9 cents per minute to Malaysia. That’s a whole
lot cheaper than the closest one – Indo Card at 6.9 cents. There was a
large “No Connection” at the front, which one would assume to mean no
connection fees, this however is not true. They simply call the
connection fee a “service charge”, which they conveniently wrote in
fine print at the back.

No connection apparently means you could hardly hear shit while
calling. I had to say “hah?” more times than I cared to count when I
tried out the card just now. There were periods of silence where I
couldn’t hear anything at all and those happened more than a few times
throughout the phone call. Very, very distracting. The only redeeming
factor is that you can talk for 255 minutes if you call a land line in
Malaysia. This goes way down to 66 minutes if you call cell phones
though. I think using Indo Card will turn out to be more economical
because all the time spent going “eh?” and the subsequent repeating of
the previous sentence took up most of the phone conversation. 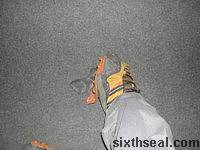 My poor, worn out shoes. I’ve been wearing this pair almost
exclusively ever since I went to Melbourne (about two years ago) and
sadly, it appears to be reaching the end of it’s lifespan. A
significant chuck of my left shoe decided to detach itself from the
main sole as I was playing snooker today. Less than 10 minutes later,
the detached part completely fell off. Fortunately, there is still a
thin sole underneath so I wasn’t exactly walking with just my socks.
Still…it’s high time to go shopping for a new pair of shoes. This one
has served me well, I had walked many, many kilometers with this pair.
Goodbye, orange sneakers and take care. 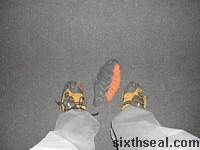