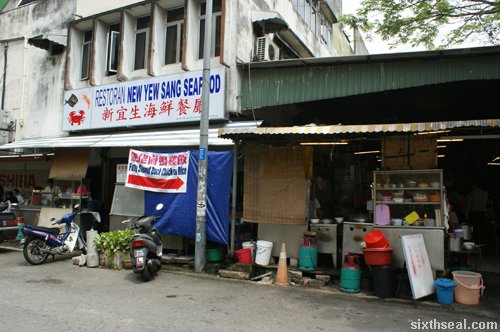 Allow me to wax lyrical about my favorite pork lunch. Restaurant New Yew Sang Seafood is a dai chow place that magically transforms itself into a chap fun (mixed rice) place in the day. It has a rather unassuming façade, but dishes up hearty meals for the office workers around these parts. 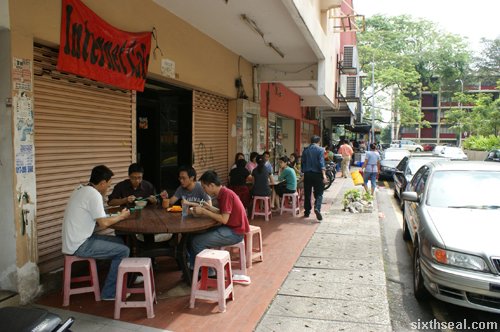 The crowd here during lunch is formidable – the tables and chairs snakes lazily out the front of the restaurant and runs along the side and all the way down, illegally infringing on the sidewalk of the other business establishments as a testament to their popularity. 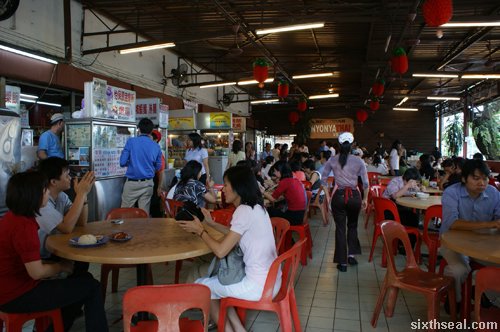 The place isn’t really optimal for eating though – the corrugated tin roof causes major heat retention in the afternoon sun and the place is always so packed it’s hard to even find a seat. There are two mixed rice places here – one is Malay and the other Chinese. Needless to say the Malay one doesn’t serve pork. 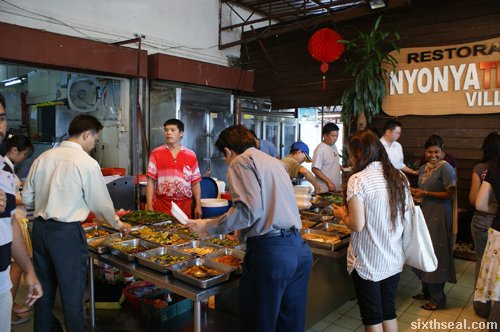 I usually come here if I want to take away. The pork has been calling me the entire week – this is the fourth consecutive day I’ve eaten here. I would eat here at night too, except they don’t open at night. 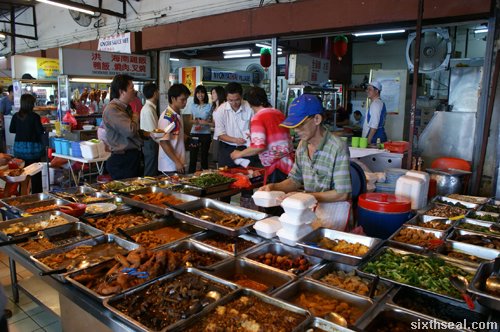 The owner with ready packed rice in Styrofoam boxes for easier distribution.

What’s so special about the chap fan over here? It’s just chap fan right? Yeah, when it boils (haha) down to that, I can’t exactly put my finger on why I like this place. It has an impressive repertoire of dishes with enough variety that you can go for a fortnight without having to eat the same dish twice. That’s not the reason though – I always get the same stuff every day. If I was forced to cough up a reason, I’ll say it’s the pork. 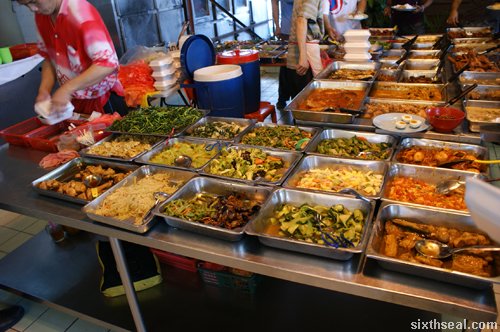 The left flank of food.

I’m particularly fond of the stewed pork over here. It’s unashamedly swine: loud, brash and full of fat. It’s like there’s a neon sign saying PIG over it.This is not a place which believes in taking off the skin and fat before serving pork – the huge chunks of lard and chewy skin is not discarded, but celebrated. Totally unapologetic. I like. 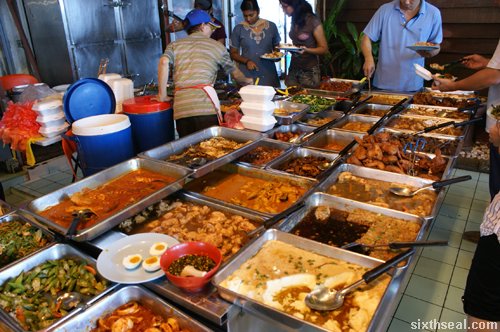 I always take one huge steamed chicken drumstick in soy sauce – it tastes like the “Asian marinated chicken” I used to get in Countdown (a chain of grocery stores in NZ) to microwave before eating. I think you’re supposed to take one piece (each drumstick is conveniently chopped into three bite sized pieces) so perhaps this is why my rice tends to rack up a bill on the high side. 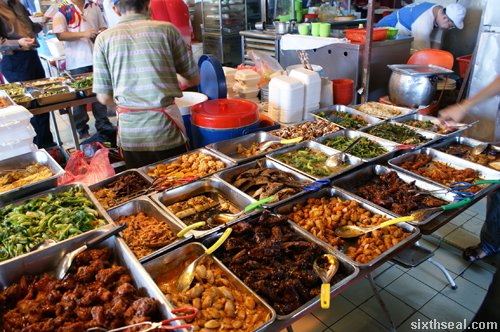 The right flank – the pork is here.

I also like the tomato cooked with eggs and starch, producing that distinctive look. I’ve never been a big fan of this when I was a kid, but it was the best (as in palatable) dish that the cook in rehab could come out with. You can’t exactly go wrong with a couple of tomatoes, an egg and starch. 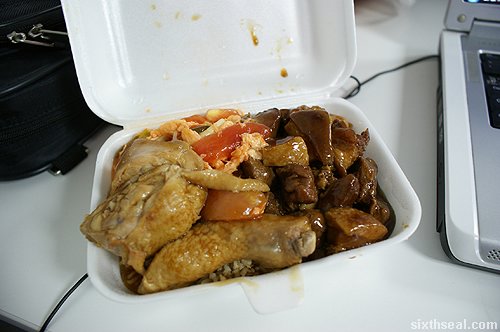 It usually costs RM 7 for my pork extravaganza…and it’s worth every penny (or sen).

Guaranteed to send you into a post-lunch coma. 😉