This post has no Sacha Baron Cohen jokes. Okay, maybe just one. 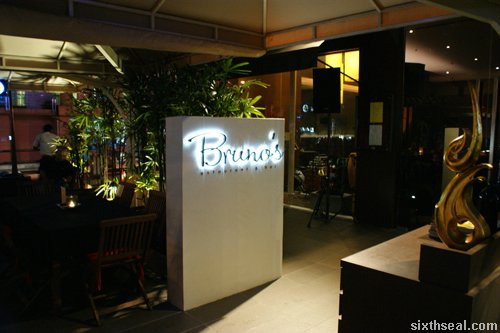 Bruno’s Restaurant and Bar is located in a corner of Jaya 33. It’s a bit out of the way and I had to search for a bit before I found the place. Bruno’s is revamping their menu and Eiling asked me to go with her. She was fashionably late as usual but there is free flow of Guinness (and other cocktails) so I didn’t mind hanging around there at all. 😉 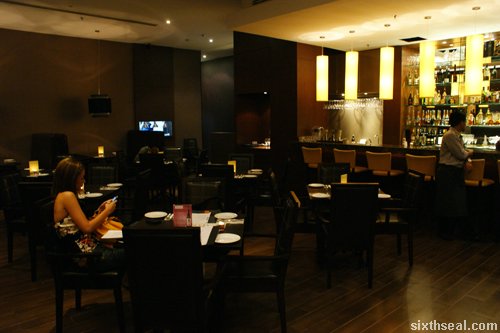 This is what the interior looks like – it’s cozy and warm. That’s Cumi and Ciki you see sitting there. I like the inviting ambience and the bar setup. 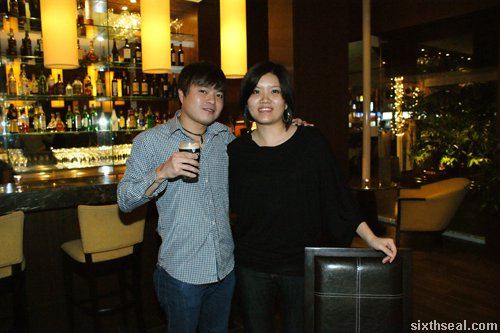 This is Candy (yes, that’s her real name) who manages Food Foundry. She’s our host for the day left us to our own devices for the menu. You can order anything you want off the menu, so after a pint (or two) of Guinness I finally asked Candy for recommendations (marked with an asterisk). 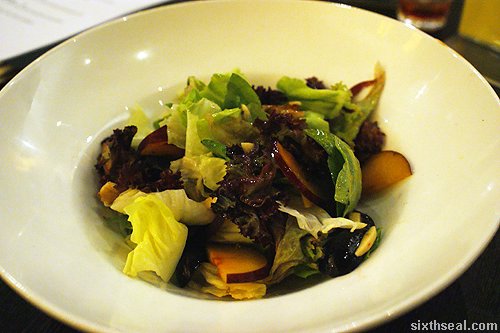 Candy suggested this starter for its interesting combination. I was a bit dubious about having salad, being adverse to all things healthy like greens, but I’m glad I went with her recommendation. I really like the sweet vinegar dressing; I ate the entire bowl of salad, something I’m not really known for doing. It’s sweet and crunchy, an experience in texture. No Hamas, I mean hummus though. 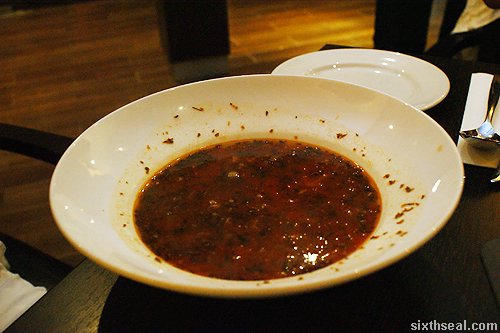 This is Eiling’s starter – it’s pretty good stuff, I liked the bacon in the soup. It’s real bacon as in the meat from the pink oinking animals. It adds a lot of porky goodness to the soup. The oregano goes very well with the consommé (a fancy name for soup) too. It’s served piping hot despite the amount of people so bonus points for that. 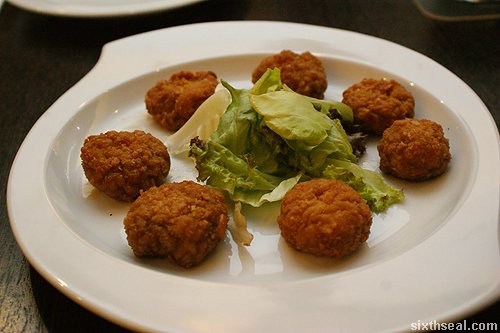 The fried breaded mushrooms are crispy and dry but when you bite into it, the juices burst in your mouth. It took me completely by surprise. I was expecting it to be dour but it’s nice and juicy inside. Magical! Oh wait, this word shouldn’t be in the same paragraph as mushrooms. 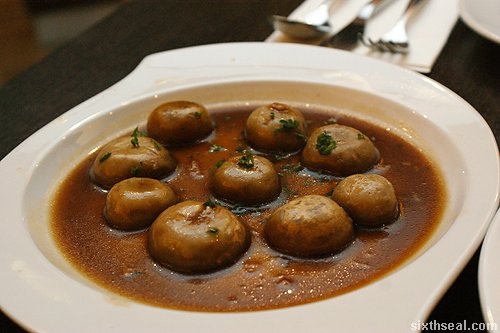 The sautéed ones comes in a delicious oyster sauce. I prefer this one coz I have a bit of a phobia about breaded and deep fried items from overeating at KFC the day before this. However, the fried breaded mushroom is an experience…it’s like Baked Alaska, except with mushrooms. 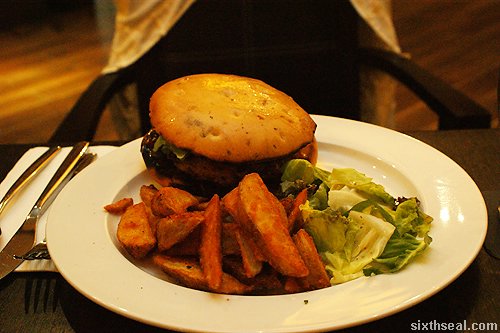 This is a surprise hit. I didn’t order it coz I’ve had some awesome pork burgers before and I wanted to go with Candy’s recommendation. However, it turns out that the pork burger was the one of the best dishes of the night! It beats Sid’s and rivals Cristang’s offerings.

You’ll love this is you’re a purist. Cristang’s P7 has a lot of petai on it and would appeal to spicier tuned palates. Bruno’s pork burger however, is intensely juicy with a hint of charcoal, sweet, and comes in a perfect crispy bun. 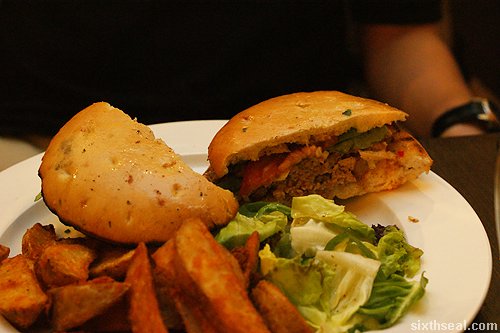 The caramelized pineapple ring really did the trick too. The pork burger is seared with Malibu which gives it a sweet coconut hint from the liqueur. How awesome is that? It’s pork and alcohol…together! 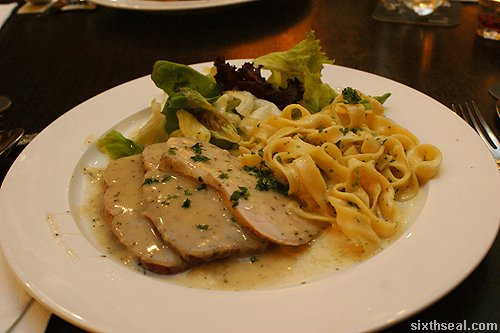 This is my mains. The roast pork was tough and dry but I love the choice of the pasta. It’s creamy and comes in a reasonable portion, perfect for those who don’t want to commit carbicide. 😉

Candy came up before I could comment and apologized for the lack of fat in the pork. I like fatty cuts. The kitchen just ran out of it on that day. The pasta was great though. 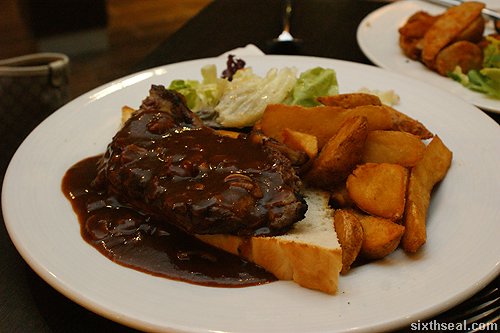 This is Eiling’s main. She didn’t quite like it, so she changed the dish. I had a bite of it and I thought the smoked bacon sauce went very well with the steak. The steak was overdone though. 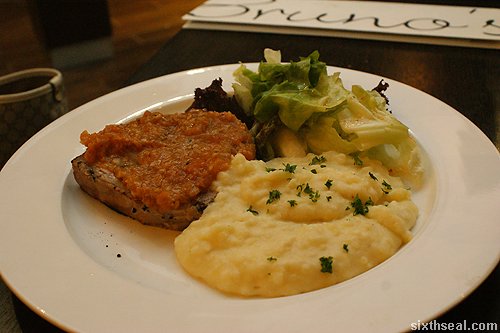 Saving the best for last, Eiling ordered this after her steak experience. I was tempted to order this at first since Candy highly recommended it but I went with a pork dish instead. I’m glad we got to try this though coz it’s d-e-l-e-c-t-a-b-l-e! 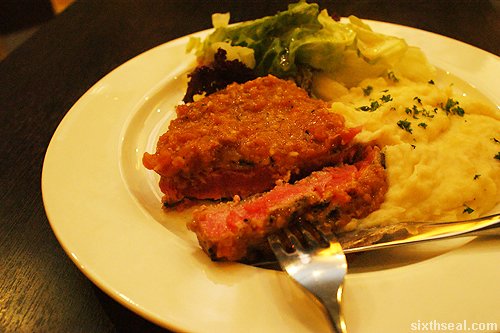 The tender melt-in-your-mouth fish was done just right and came out in a very appetizing shade of pink. It’s very juicy and I finished it despite having an entrée, starter, mains and several pints of Guinness. It’s bluefin tuna, how can you resist?

I devoured it. =D 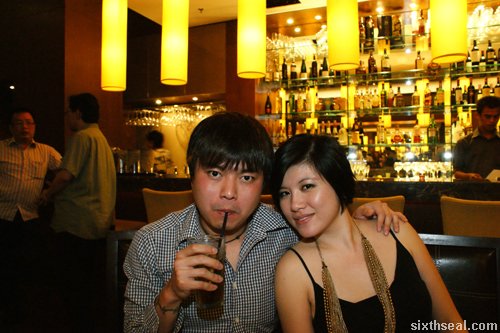 Note to self: The old sipping on a straw trick does the job in making you appear slimmer on camera but remember not to stare bug eyed at the camera while at it. 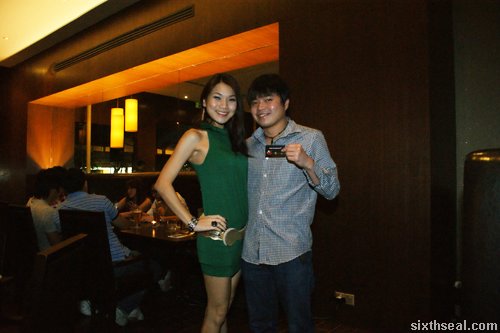 Oh, and I met Sue Lynn a.k.a. Bangsar Babe and just like her name suggests, she really is one. 😉 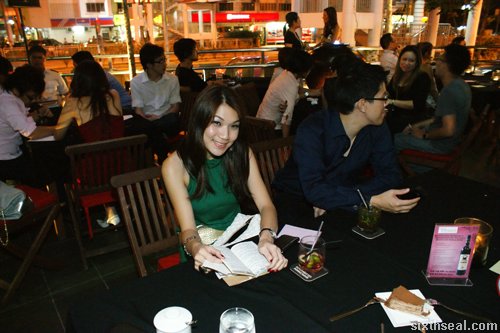 Do you know how Sue Lynn does food reviews? She keeps meticulous notes with a little book she brings along, complete with name cards and such. I used to wing it, relying on my less-than-stellar memory but realized that’s not the best way to go about it. This time I used my Xpax BB to type notes while tasting the food. Awesome tool! =D 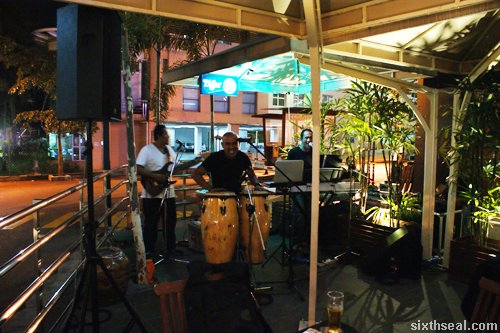 There’s also a band in the al fresco area which entertains song requests. The singer does a pretty good rendition of Hotel California and bastardized (in a good way) the lyrics of Black Magic Woman. I like the band and you can chill at the patio having drinks. I only wish they had those mist fans installed coz it was a rather warm night.

Notice: Bruno’s in Jaya 33 will cease operating in December 2009. However, fear not, there are other plans coming up and they are in the midst of setting up another outlet…which also serves pork! =D