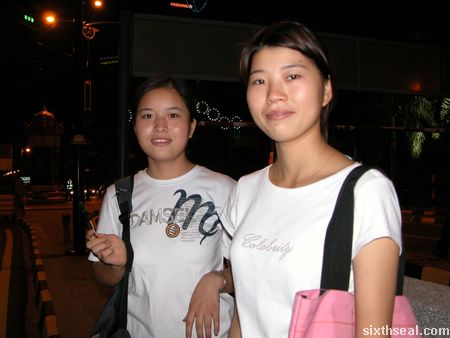 I don’t actually know if this is a scam, but I have a strong
suspicion it is. Anyway, I was walking to Suria KLCC after work when I
was approached by two females (photo above). I was taking photos of the
Deepavali decorations with my digicam strapped around me and I heard
them hailing me from across the street. I did not heed them as I was
trying to get a steady shot and I was standing in traffic, which is
enough multitasking for me.

Well, they came over to my side of the road and accosted me. One of
them asked if I was Malaysian, and I said yes, but I’m not from KL, I
just work here. The other one then asked if she could use my cell phone
because they just arrived in KL from China today and they somehow
didn’t bring any cash and their ATM card doesn’t work, so they’re stuck
here. They needed to use my cell phone to call their dad, who is coming
tomorrow and tell him to bring cash instead coz they said China’s ATM
cards doesn’t work here.

Anyway, I was happy to help (even though my cell phone credit is
rather low) so I let them call Beijing on the condition that they pose
for a photograph. I take a lot of street shots for my personal stock
photo collection, plus I thought this would make a good post so I
wanted to get pictures to go with it. They agreed and I let them use my
cell phone. They called a number which went 00865525xxxx (last four
digits crossed out for their privacy). 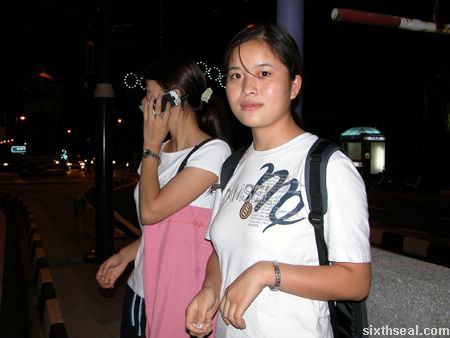 That really is a phone number from the People’s Republic of China, I
checked the country code. Anyway, after talking on the phone for a
while, she passed the phone to me and said her mom wanted to talk to
me. Her mom’s Beijing accent was really strong, I couldn’t catch half
of the words she said, but I get the gist of it – she was thanking me
for allowing her daughter to use the phone, so I said no problem. My
Digi credit went from RM 25.35 to RM 2.69 though…

Anyway, they told me that they’re medical school students from
Beijing and just arrived today without any cash. “Where are you going
to sleep then?”, I asked altruistically. “I was about to get to
that…”, one of the girls replied. “I’m sorry, but could you do us a
favor? Can you please lend us some money for a hotel tonight?” 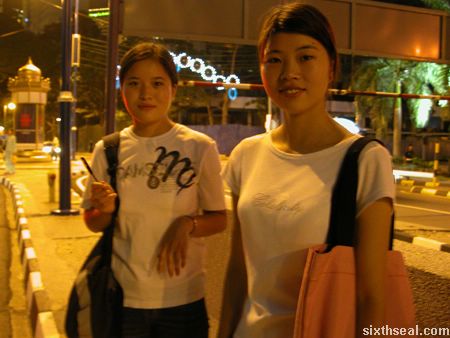 So there I was…considering if they’re scamming me or they really
are stuck in KL without money. Now, I wouldn’t mind helping out if the
situation was really what they said it was…but I only have about RM
20 in my wallet and I told them so. “Oh, we’ll just take whatever you
have…give me your number and I’ll call you tomorrow once my dad gets
here and I’ll pay you back okay? I’ll buy you lunch too.”, said one of
the girls.

“How are you going to get a hotel room for just RM 20???”, I asked.
The girls mumbled something which I couldn’t catch and then asked if I
could withdraw some money from an ATM. The audacity….I said no,
because the situation is starting to sound rather dodgy. I told them to
go to the police station nearby and they would direct them to the
Chinese embassy for help. “Oh, then it’s alright, we’ll just take the
RM 20.”, they said.

Here is where the story gets slightly more interesting. They kept on
repeating the story about coming to KL and having no money and there
were slight discrepancies in every iteration. It all sounded rather
scam like to me, but I gave them the benefit of doubt, just in case the
poor girls were telling the truth. I am quite unconvinced though due to
the lack of luggage on their behalf and the topic of how they got to
Suria KLCC from KLIA was quickly changed. One of the girls produced a
notebook (complete with a “Terima Kasih – RM 3.60” sticker on the
front) and asked me for my number so they could pay me back tomorrow. 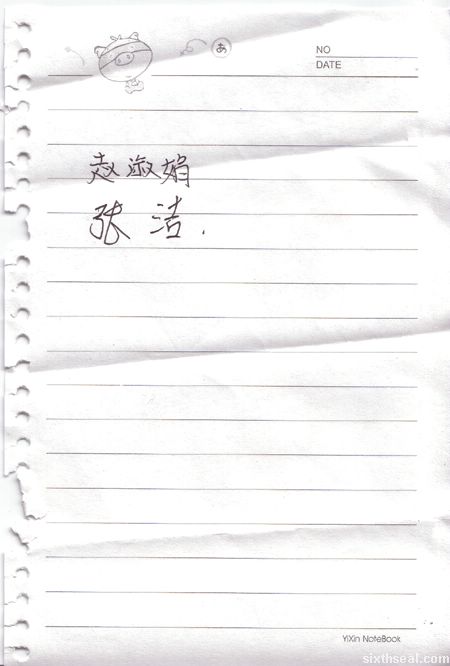 I don’t read Chinese (but I speak it fluently, thank you very much) so here’s the translation from a friend:
Zhao Shu Juen
shu means elegant , related to a woman, also means ‘woman’,
juen = something like ‘good woman’
Zhang Jie
jie means clean
Zhao and Zhang are family names.

Terima Kasih indeed…I did write down my cell phone number to humor
them, plus I wanted them to write their names in it too. However, I did
not give them any money, because even if the price tag accidentally
left a ‘B’ out and it was actually RMB (The People’s Currency), I doubt
that goods in China would have a “Terima Kasih” in red above. I did not
point this out to them though, since I was still waiting for them to
write their names. Heh.

You’ll never guess what they asked next.

“Can we borrow your camera for a day and return it to you tomorrow?”

“Can we call you tomorrow and you borrow us the camera for the day then?”

I didn’t even find the need to continue the conversation. I told
them to go to the police if they really need help, they would direct
them to the embassy and left.

They did not call me today. 🙂