The worst thing about taking the shuttle is being the 26th person in the
queue for a 25 person capacity bus. If only I had walked a little
faster, I would have been the 24th person instead. I got into the line
just slightly behind two girls. Oh well. I took the Oakleigh bus
instead since it was already docked and ready to leave. Oakleigh is one
station in front of the Huntingdale bus that I usually take.
Unfortunately my 10 trip Zone 1 ticket got wet during the
snow-in-pocket fiasco during my trip to Mt Buller and it didn’t quite
work on the validation machine. Good thing the kind bus driver let me
on anyway. I’ve only been to Oakleigh station once before, because the
nearer stations are Huntingdale and Clayton. There is a lot of
community artwork on the station wall, which looks slightly depressing
and dodgy. 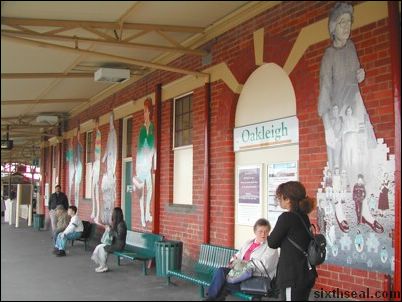 Well, I had my first supervisor meeting for my Industrial Experience
project today. It was with Ashley Cambrell, a very likable guy who also
happens to be the person who wrote the program we’re supposed to be
updating now. Mmm…inside information. =D Oh, something rather
embarrassing happened to my during the IE lecture. I haven’t had anything
to eat since last night and I was chewing gum during the lecture. People
who have done this before can attest to the fact that this is a big no no.
Apparently, the chewing action produces a reflex where the stomach
produces digestion acids (can’t be bothered to check for the correct
terminology) in anticipation of the meal. However, with a piece of chewing
gum, there is no tangible “meal”. The stomach does not like being tricked
like this and will tend to protest with a loud rumbling. I swear it was so
loud, my friend looked at me and asked “Are you hungry?”. Sheesh…what
loud rumblings my stomach make. It wasn’t just a one off thing too, it was
so loud the row behind me could hear it. Heh. I finally excused myself and
got a chocolate milk and some spring rolls from Merlins to satiate the
beast.