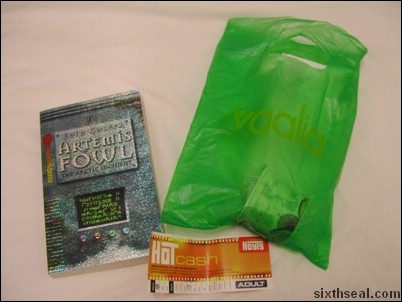 Listening to the Sound of Music soundtrack always cheers me up for some
reason. 🙂 Anyway, I went with a couple of my friends today to catch
Reign of Fire [reignoffire.com]
at the Hoyts in Chadstone. It’s a pretty good movie, but not one you
should question too much. There are things in the movie that requires some
suspension of belief. We had a long list of implausible things by the time
the movie ended. Heh. The best scene of the movie is the one where Van Zan
jumps off a building to engage the dragon with an axe. That was the money
shot. I expected more from the plot outline of the movie, but generally,
it was a pretty good film. Anyway, I also bought
The Artic Incident
[artemisfowl.com] in Borders while waiting for the movie to start. It’s
the second Artemis Fowl book, and I didn’t even know it was already out. I
bought the first book and finished it in a few hours while sipping double
shot ice blended lattes after having to fly to Kuching for a day (long
story) and found it was rather good. I heard a lot of hype about the first
book coz people were comparing it with Harry Potter. I’ll say Harry Potter
is better, but Artemis Fowl is a close second. However, the best books
I’ve ever read are the ones in
The
Uplift Saga [davidbrin.com] by David Brin. Those are divine if you’re
into science fiction. Oh, and there were people distributing free yogurt
when we were walking out so I grabbed a bag. Contents of the bag: 1 x
Vaalia Low Fat Passionfruit Yogurt, 1 x plastic spoon, 1 x A$5 gift
voucher redeemable at Coles, BI-LO, Safeway etc. Interesting.