I went to the Korean BBQ House today with a couple of my buddies. We
had wanted to go to Shabu Shabu at first but it was totally full. Our
next choice was the Paramount buffet, but we saw that it only happens
in the weekends. Since the Korean BBQ House is right beside Paramount,
we went for that instead. There were four of us – Daniel, Ting Chuan,
Johnny and myself so we had the meat platter thingy. None of us have
been here before, it had only opened recently. This is the same place
that Vivien [blogspot.com] went to on Wednesday. 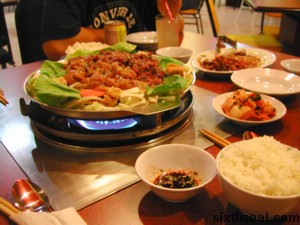 Anyway, the meat platter was really nice, it had beef, lamb (mmm)
and chicken and it tasted really good. The meat was put in the middle
of the bbq platter and there was some chicken soup poured over it.
There was a small moat thing surrounding the platter to catch the soup.
The meat tasted really good, it was probably marinated well and the
resulting soup + meat drippings on the side of the platter was divine.
I imagine it had a lot of calories though. 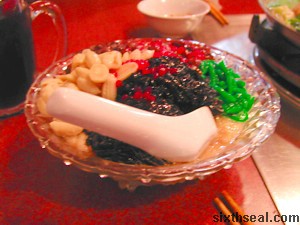 I also had this ABC special, they called it a BBQ special bowl or
something, I couldn’t remember. The bowl was huge and it had a scoop of
ice cream in it too. However, the best thing about this place is the
service. The service was excellent. There was a waitress
to pour the drinks, cook the meat and serve it, all with a smile. I was
pleasantly surprised at this level of service and I would have no
problems recommending this place to anyone. 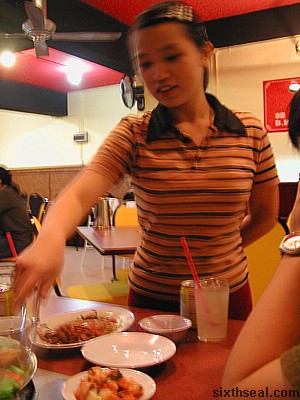 Hmm…I just realised that we did have a group photo taken, but one
of the guys was partially cut off from the frame, so I’m not going to
post it.