It’s been a while but I still hate doing this…basically you have to
punch holes out of a parking coupon (scanned image above – good thing
my scanner is still available) and leave it on the dashboard so it’s
visible through the windshield. There are five sections to remove and
even though I usually like doing things like this (popping bubble wrap,
depressing that thingy on the cover of McDonald’s soft drinks etc.),
this isn’t fun for someone who answers “I don’t know” to “What date is
it today?”. 🙂 It’s a good thing I have a Palm for dates, the time is
alright though, there’s always the car clock and the cell phone one.
The other problem with this is the way it has changed the way people
park…while it used to be (usually) obvious whether a car is parking in
or moving out, it now isn’t. Malaysia is hot, so people leave the
engine running to have the air conditioning going while messing about
with these parking coupons. You’ll all be sitting there waiting and
thinking, hmm…has this guy just parked in and getting the coupons done
or is he arranging his groceries (or whatever) before driving out?

The worst thing with the coupon system in Sibu is the way you have
to put as many as you’re going to park for eg if you want to park for 3
hours, you need to perforate 6 coupons (each lasts half an hour) and
put them all in a row on your windshield. The problem is there is only
one denomination available – the 40 cents (42 cents with tax to be
concise) one, which lasts 30 minutes. The people who need to park for
the whole day needs to put rows upon rows of parking coupons to cover
the time, and making sure to arrange it properly so none is partially
obscured, or they’ll see The Red Ticket (parking fine) on their
windshield wiper. I mean wtf? Am I the only one who thinks there’s
something wrong with this? 6 hours of parking requires 12 coupons and
these things are not small – they’re the length of a standard DVD case
and about 4/6 the width of it. Come out with higher denomination
coupons for Christ’s sake. 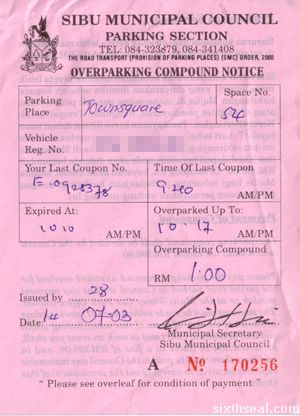 Anyway, I got fined yesterday because I over parked for a measly 7
minutes. The parking fine (dubbed the “Overparking Compound Notice”) is
RM 1 per 30 minutes, more than twice the price of the coupon, which
isn’t much, so I don’t really care, I just feel that the system isn’t
practical for long term parking unless they come out with higher
denomination coupons like Kuching has. Oh, the back of the parking fine
has Fine Print that’s quite interesting – have a read: 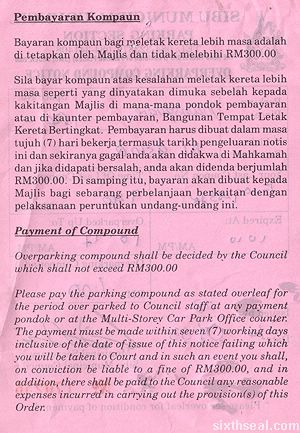 Well, I’ll just give a quick update (personal stuff) about the things that happened yesterday and today:

I went to Wisma Sanyan early yesterday morning with my gf to buy
some stuff she needs before leaving for KL. The parking fine was from
then, I the parking inspectors usually aren’t that vigilant, so I
figured we could drop by Tops to get something to drink before heading
to the car. We saw the Parking Inspector’s Employee of the Month
walking right past as we headed back, curses. 🙂 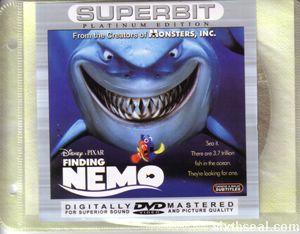 Anyway, I also picked up a pirated (unlicensed) VCD of Finding Nemo
to watch in the afternoon with my gf. It was funny how the store
operates – since the raids, they have only legit things on display, but
there are plenty of posters of new movies ie Matrix Reloaded, Charlie’s
Angels 2, Hulk, Terminator 3 etc on display. Basically, they ARE
selling pirated VCDs and DVDs of the pirated movies displayed in the
posters, so just ask at the counter, and the girl will dig around the
back room and be back with the movie of your choice in a few seconds.
😉 Other prices are still selling it openly though, but unfortunately,
Sibu saw an increase in price from RM 5 to RM 8 per movie since the
raids. It should stabilize back soon though, seems that the operation
is over.

I saw heaps of people at the Sibu Town Square last night for the
Borneo Cultural Festival, it was PACKED. People were parking in that
road divider between two opposing roads (the ones that has the street
lights). Man, I wished my digicam was working. I didn’t go though, coz
I was going for dinner.

My gf went back to KL this morning. 🙁 Her semester started about a
week ago, so she’s already going over late. I drove her and her mom to
the airport this morning and we got some breakfast there before she
took the 10:05 am Air Asia flight out. I will be seeing her soon
though, will be heading over to KL in a while as well. 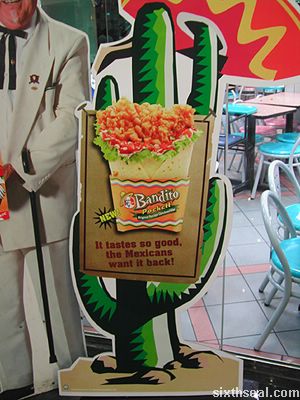 The picture above was taken about two weeks ago (my digicam still
broken – only scanner working), I had wanted to make it PoTD with a
crack about “San Pedro tastes so good, the Mexicans want it back” but
never got around to doing it. That’s okay, since I finally went to eat
KFC’s Bandito Pockett combo meal today (comes with a drink and potato
wedges) with Michelle, friend and pharmacy student. 😉 I was on my out
when she called me so we went for lunch and then visited our ex-high
school. Oh, the Bandito tastes okay…a bit bland (had to keep on adding
Thai chili sauce) and you get to buy a 325 ml can of Pepsi Twist for
just 10 cents if you buy it with the meal. I wasn’t really interested
at first, until I thought of something it would go well with.
Potentiator?

That’s it, the story of my personal life up to now. 🙂