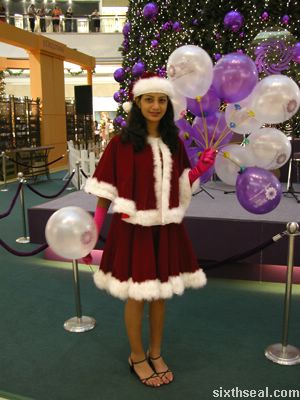 There were two Santa Clauses (that doesn’t sound right to me too) at
Suria KLCC today. I think there have scheduled appearances several
times each day to hand out balloons (with the Suria logo, what else) to
anyone who wanted them. This was taken at around 6:45 pm while I
walking to the KLCC LRT station to get back after work. They were two
of them, one female and one male and the Christmas tree has been strung
with er…strands of lights. It looks good, and the tall tree is topped
by a pink glowing Suria KLCC decor. 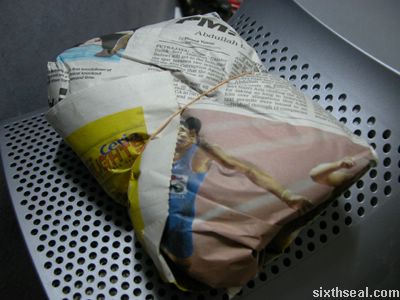 How to cook with a monitor.

I have a lot of photos and things to write about today, but there’s
not much time left before I have to sleep, so this will be a shorter
one. See that photo up there? I just took it, the nasi kandar was
bought at around 7:30 pm in Bangsar (where I get off the LRT and take
the bus for the final leg) and the food is getting cold, and it’s been
sitting there since I got back. I’ll try to reply all the comments
before eating and going to sleep.

If anyone is wondering, my monitor produces an obscene amount of
heat (I think it’s faulty) even at the lowest gamma setting and with
all tweaks to reduce possible causes. It will keep the food somewhat
warm, if I overturn it once every 15 minutes. 🙂 It’s very useful in
colder climates, turning it on for more than an hour in your room would
make it seem like an oven. Thus, you have a monitor AND a heater at the
same time. This unique monitor/heater combo can be YOURS for the low,
low price of RM 1000. And if you call within the next 30 minutes, we’ll
even throw in the packet of nasi kandar (it has a drumstick, sotong and
meat inside) JUST FOR YOU! Yes, that’s the monitor/heater combo and a
nice pack of RM 6.20 nasi kandar, what a bargain! So act now before
it’s sold out, you wouldn’t want to miss this chance of a lifetime!

What do you think? Should I change my career into telemarketing and annoy the shit out of everyone who watches late night TV? 😉