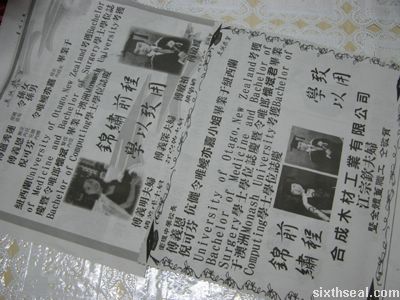 Sin Chew Jit Poh and See Hua (local Chinese dailies) had graduation
photos of me and my sister today. Anyway, about my future plans that
I’ve meant to post about – I’ll be based in Kuching starting February.
I’ll be pulling in a 2k salary, which was part of the reason behind the
decision to move. There’s also an EPF (KWSP) contribution and Kuching
living expenses are much cheaper than KL which means I’ll have more
money to pay for the unholy excess bandwidth charges that sixthseal.com
racks up. :p

My field is somewhat similar to what I was doing in KL, except I’ll
also spearhead their networking solution in addition to being a
programmer. I’ll be working a six day week (well, five and half days to
be exact) – 8 am till 5 pm weekdays and 8 am till 12:30 pm Saturday.
I’ll be driving in Kuching so the earlier start time wouldn’t be an
issue. There you have it, I’ll be flying back to KL on the 27th to pack
up the remainder of my stuff and flying back to Sibu on the 30th and
it’s off to Kuching I go on the 31st of January.

Speaking of which, does anyone know of any rooms to rent in Kuching?
I’ve heard of several, which are either too expensive or not suitable.
I’ll like a room in a house with a washing machine and air conditioning
(optional), the ability to get a phone line installed and privacy (that
means no barging into my room and I have the only set of keys to my
room). I am not noisy (I always use headphones) and do not mind noisy
environments (I have benzos ;)). Open minded and discreet fellow
residents would be appreciated.

1 thought on “Graduation in the papers and my Kuching plans (accomodation?)”