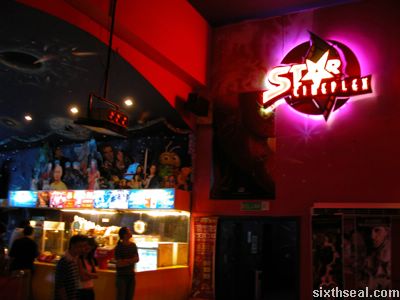 Miriam wanted to do this horror movie marathon by watching all the
currently showing flicks …so Saturday night, Ah Lung (Miriam’s bf)
dropped by my place to pick me up since there’s an established
association between Saturday nights and me ending up incapable of
operating a motor vehicle safely, and my vehicular accident history
does not inspire faith in the others so I don’t have to drive. Heh. 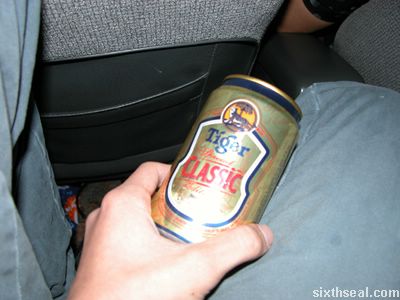 We then picked up Ah Boon and he had come with offerings. There
seems to be this beer called “Tiger Special Classic” out on the markets
now. It didn’t to taste any different from the normal Tiger beer and
evoked (not entirely unwanted) memories of Cap Langkau. Anyway, we
headed to Star Cineplex after that to go get the tickets. There two
that she hasn’t watched – Ju On 2 and Dead End. I haven’t watched any
of them. We finally settled for the latter and went to get some supper. 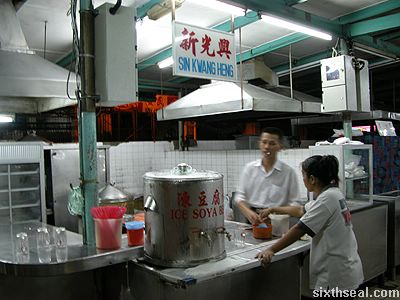 This is supper at the Central Market, Kuching. The stall’s name is
Sin Kwang Heng and they’ve been serving soya bean and sio bi’s for as
long as I can remember. 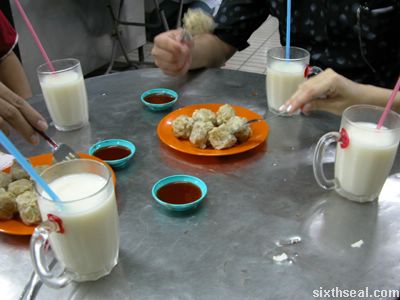 The four of us had that and went back to Star to catch Dead End. 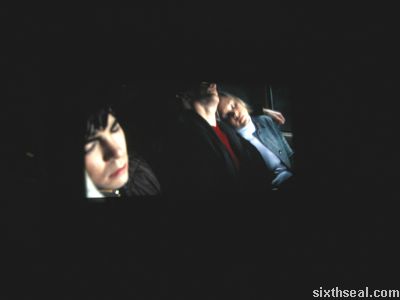 The movie was alright, there’s a lot of that sudden creepy music
leading to a Horrible Thing (TM) scenes that has become a staple of
horror movies. There was on particularly disconcerting one with the
mother seeming to scratch an itch that wouldn’t go away, and she kept
on going at it, and the camera pans right and we see that she’s
scratching her brain, the skull fragment has fallen off to expose the
brain.

I think that the movie counts too much on the “sudden shock” horror
movie cliche though I think they managed it well, since I could feel
the people behind me recoiling in fright. The funniest exchange of the
day:
(sudden horror scene)

Ah Lung: Wo mah se ho e hak tiok.
(The scene caught me by surprise too.)

Me: Wa chiak aneh chey Xanax, e pun etan hak tiok wah!
(I’ve taken so many Xanax pills and it still managed to give me a start!)

Miriam: Wo mei yo pei siak tau wor?
(I didn’t think that scene was all that scary.)

We look at her. Horror movie veteran.

Anyway, after the movie, we received word that raids are still in
full force (sigh). Tropicana (?) or another disco/entertainment venue
was raided earlier during the night. We drove around to await further
news and went hunting for Ah Kua’s for my digital photography
collection. Here’s one of them: 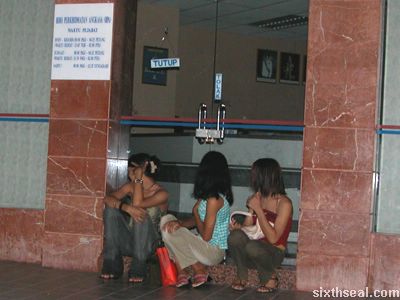 Unfortunately, they managed to obscure their faces before I took the
photo. The flash is terribly slow and my digicam is the Nikon 5700,
which no one in their right mind would call low profile, so I didn’t
get many good ones, the camera can be spotted a mile away. I’ll only be
publishing this one anyway. This does not mean that we’re against
transsexuals or anything as malignant as that. It’s just street
photography, a hobby of mine. 🙂

Anyway, true to the basics of economics, word started filtering in
that dealers are trying to offload as much of their stock as they can,
since word about raids get around and there’s be no one in left the
outlets except the exclusively alcohol representation. It would be
logical to assume that hoarding the pills for next week due to Acts of
Law Enforcement would be the sane thing to do, but strangely, the
Kuching market subscribes to an alternate line of thought and goes for
a more aggressive approach – they offload it by undercutting “normal
street prices” which is usually reported as RM 35 outside a venue and
anywhere from RM 40 upwards inside. 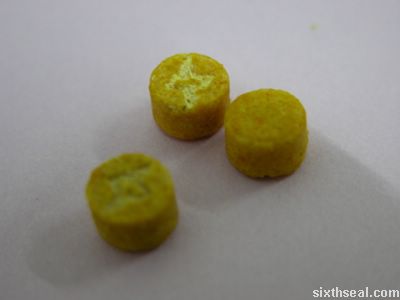 These were going for RM 30 each or RM 80 for 3 pills, going as cheap
as RM 1,750 for 100 tablets bulk. A friend of ours bought the 3 pack
(he’ll be the only one dropping) and wanted to reagent test it at my
place, which I didn’t mind at all, so long as there’s relevant data to
publish about the Ecstasy pills going around Kuching now.

Disclaimer: I did not consume the pills nor do I have
anything illegal in my possession. I quit all illicits remember? All
three pills were consumed by a mutual friend who shall remain unnamed,
but we’ll call him SWIM for consistency in publication. I did not know
that person before today and I don’t have any of his contacts either.
He just wanted me to reagent test them to see what substance it
contains and said he’ll tell me what it felt like, called him just now
and this is what he has to say:

(All text below is by SWIM, but sixthseal.com has full copyright and
intellectual property ownership claims granted by SWIM in return for
reagent testing the Ecstasy tablets. All photographs are taken by me.)

I, bearer of good news, stand witness that there’s more real Ecstasy
(MDMA) in the market now. This may be due to a more sophisticated
clientele, or to the relatively short acting properties of this
compound, compared to methamphetamine, which makes MDMA ideal for a
night out. I was quite pleased and surprised when the Marquis result
went purple/black: 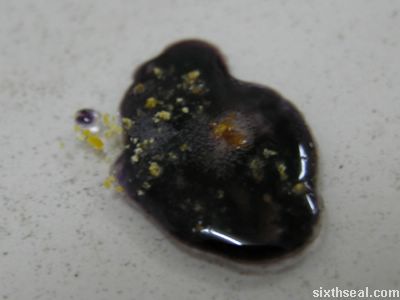 And the Mandelin reagent produced a shade of purple as well: 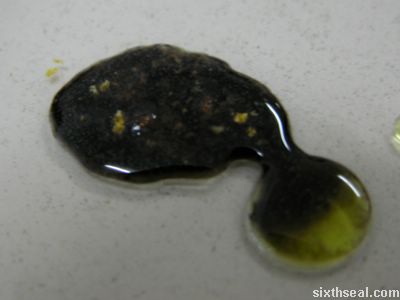 I triple dropped this (crunched up and swallowed all three Ecstasy
pills at the same time). Obviously I’m not very big on ascertaining the
MDMA content of each pill beforehand. Needless to say, this is not in
the interests of harm reduction since there might be more possible
medical complications. I’ve has always been a loud proponent of
multiple pill consumption, which seems to be a concept which is foreign
in Kuching. People seem to go really slow here, one or half a pill and
maybe the other half later. 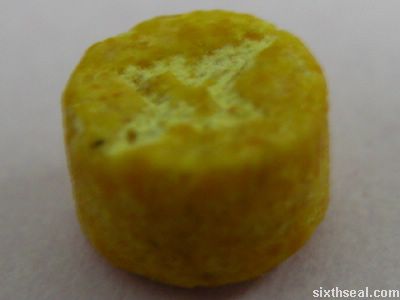 Front of the pill with the X imprint.

Wtf? I’ve never seen the point in dropping a single pill, except for
review purposes. I typically quad drop (for weaker pills) and triple
drop (for stronger ones), since our group of friends are in different
lines of work so it’s only Saturday nights. Go hard or go home. 😉 I
heard these ones are strong, so I triple dropped after testing for
active compounds with the reagents. I feel safe and I’m not worried
about MDMA, since I’ve had quite a bit of experience with it, so I
didn’t mind consuming an potential atypically strong batch since I’ve
been on higher doses (560 mg MDMA lab tested).

T+ 0.15 The typical indicators that an MDMA psychedelic trip is next on your itinerary.

T+ 0:30 I have to credit the local pills for being able to hold it’s own in terms of quality.

T+ 1:00 Very nice! I haven’t been this happy in a long time! 🙂 I must have let my serotonin stores fill up nicely.

T+ 1:10 Jaw chattering, teeth clenching and feelings of alternating
extreme cold and extreme heat manifested. The body temperature
regulation issue resolved itself soon, but Miriam noticed that I had
unnaturally dilated pupils and the others could see I was peaking hard.

T+ 1:30 Totally out of it, Speech was rendered near impossible due
to heavy slurring and I found it hard to communicate due to the
inability to remember words and construct proper sentences. My friends
could tell that I was much blurer (than usual anyway ;)). I could
maintain some semblance of sobriety if the situation warrants it,
thought it probably won’t fool anyone in a drug raid.

Events after this point are only vague half forgotten memories, just
remember a wonderful flood of serotonin which I haven’t experienced in
a while. There was extreme nysagamus which adds to the beauty of MDMA.
I’m not a big fan of pills, to be honest, I’m more of a meth fan, since
MDMA usually precedes the dreaded E-pression. Three of these (no
tolerance, last pill was 1-2 months ago) did give me a wonderful MDMA
experience. I thought I couldn’t get the same effects from MDMA anymore
but I was proved wrong. It was beautiful… 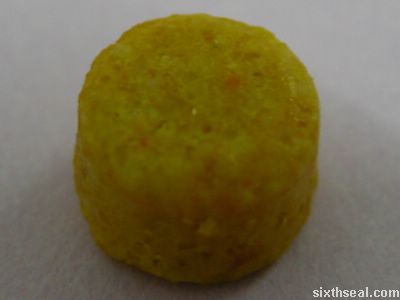 Back of the Yellow X pill – not very well pressed.

RTB around 5 hour mark. Sleep doesn’t seem to be forthcoming even at
T+ 11:00 despite generous benzodiazepine administration. The comedown
is a bit harsh too, to say the least. The depression storm is
definitely building up and it seems like a big one this time. With one
hand, He giveth and with the other, taketh away. 😉 Nevertheless, I
give it a much deserved: 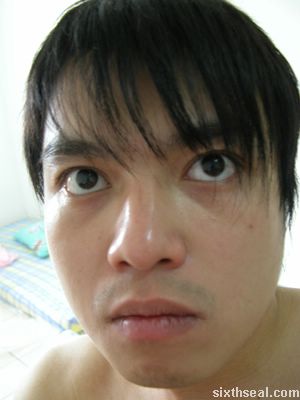 A least complimentary photo of yourself every Sunday. Come as you
are. Scattered Sundays (TM) is a designation day of rest according to
the gospel. Here at sixthseal.com, we like to think of ourselves as
Christians and thus is bound by the teachings of the Bible. The Lord
hath speaketh! In deference to this religious observation, comments
will only be replied on Monday. 😉

In other news, I’m planning to go for a full renal test this week.
I’ll love to see the results. My girlfriend always admonishes me with a
“hen tuo when ti” when I say something like this. 🙂 I admit, I’m a bit
of a hypochondriac, but I want to go anyway, if just to see the
results. Which medical center would be cheaper? Normah or Timberland?
I’ll wager RM 50 that someone is bound to say, “Renal function test? At
your age?” 😉 I’ll love to reply with something like “Yeah, I wanted to
see if 8 years of recreational drug use did any damage to my kidneys.”,
but obviously, a smartass reply should be avoided since our fine
country Malaysia does not offer full doctor patient confidentiality.
It’s definitely a far cry from medical professionals in Australia who
treats the patients (had several drug induced ER trips) and releases
them after lightly treading the issue about whether the patient wants
to talk to the inhouse drug dependency counselor (it’s optional), with
no obligation to report to the police. Hell, they even give you your
stuff back…