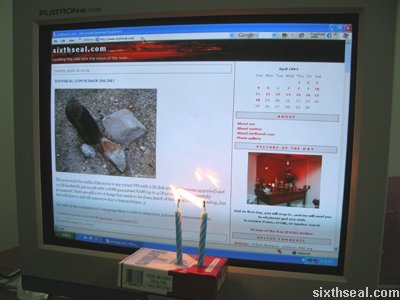 On this day, the 19th of April 2004, sixthseal.com celebrates its
second anniversary! It coincides with the day this site was moved to
its own VPS (Virtual Private Server) to accommodate the huge bandwidth
demands that it generates. There will be the traditional wrap up of the
previous year as well in the post below.

I have been blogging for two years now, starting from a humble HTML
blog without comments to the blog you see now. I have watched the site
grow from single digit daily unique visitors to the thousands of unique
visitors that it now receives every day. For that, I thank everyone,
from the vast silent majority to the vocal minority, for reading my
daily posts. Thank you!

This year was particularly noteworthy, due to the fact that the
timeframe covers my final days in university at Melbourne, Australia
through to my first job at XM Malaysia in Kuala Lumpur, Malaysia and up
to my second job in Kuching, Sarawak. The site also expanded and
acquired multiple domain names under the sixthseal.com umbrella – castitas.com (9th September 2003), pengsan.com (18th November 2003), louisalee.com (27th January 2004) and fengtau.com (30th January 2004).

It also stands witness to “veritas” finally coming clean and
admitting what everyone already knew or guessed – there was never a
guest author…every single “veritas” post was written by the “main
author” (which would be me, there is only one author on sixthseal.com).
It was necessary to use a pseudonym to distance myself from the drug
related content, thus “veritas” was born. I realize that it’s an ironic
name since “veritas” is Latin for “truth”.

However, it was originally meant to provide readers with an insight
to my recreational drug use – the Latin word for “truth” was meant to
dispel the junkie drug user stereotype and to provide true
harm-minimization oriented drug education, without any government or
anti-drug propaganda. It was also meant to help existing users to be
safer and more responsible in their drug consumption and to be aware of
what they’re actually consuming and the risks involved.

I’ll be the first to admit that it’s not all altruistic…I love
drugs and writing about them. I enjoy receiving the “fan mail” that
veritas gets. I wanted to be the first drug blogger in the world. I’m
not sure if I really am the pioneer in this sense (experience reports
have been around forever), but I’ll like to think that I’m the first
one to take photos of the various drugs that I consume and write posts
about them in a weblog format, at least in Malaysia.

Deviant Species doof
December 22, 2003 – Melbourne, Australia
The outdoor rave (doof) I squeezed into my itinerary when I went back for my convocation.

McDonald’s Salads Plus
December 28, 2003 – Melbourne, Australia
I ate most of the Salads Plus menu – an attempt by McDonald’s to shred (no pun intended) it’s unhealthy image.

Last day at XM, Malaysia
January 15, 2004 – KL, Malaysia
My last day at the first company I worked in, before moving to Kuching for a better paycheck.

HIV testing in Malaysia
March 22, 2004 – Kuching, Malaysia
My community service message to balance out my karma for all the drug posts I make. 😉
*Updated with Western Blot Gribbles test results.

Come out and play
April 4, 2004 – Kuching, Sarawak
Nightlife in Kuching.

Lidocaine experiment
April 12, 2004 – Kuching, Sarawak
I inject myself with Xylocaine, “veritas” has already been admitted to be me all along.

Dextroamphetamine scripting success!
April 30, 2003 – Melbourne, Australia
This is legal speed (not available in Malaysia) – amphetamines from your friendly neighborhood doctor. 😉

Video of veritas smoking methamphetamine
February 7, 2004 – KL, Malaysia
The first video release on sixthseal.com – we embrace all forms of journalism. 😉

The first anniversary of sixthseal.com can be viewed here.

Thank you, dear readers of sixthseal.com. It has been another good year, and here’s to many more good years to come! Cheers! 🙂