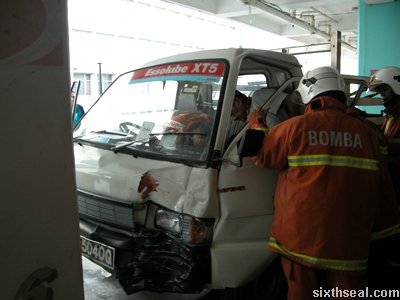 There was an elderly man who ran into one of the supporting pillars
on Level 5 in Permata Carpark, not 10 meters from where our booth was.
It was one of the people from the catering service and apparently, he
had a bit of an argument with his coworkers, drove off in a huff, and
crashed into the pillar while navigating a turn. 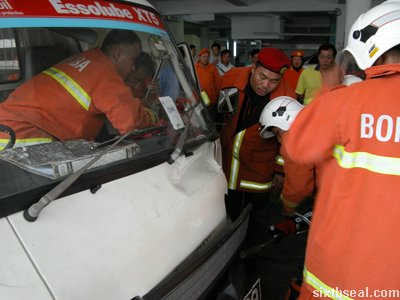 Bomba (Fire Department) had to be called to extract the man coz he
couldn’t move from his seat after he crashed. One of the fireman went
into the cabin to support the structure, while the others used the Jaws
of Life to get the injured man out. 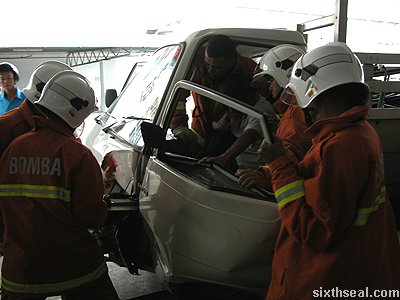 The contraption, if you’re not familiar with it, is a hydraulic
device that’s used to pry through tough steel (like in automobiles) to
free the trapped people in the car. 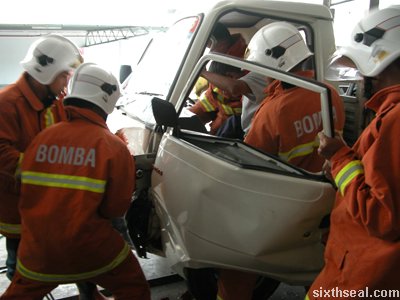 The man was finally freed after 15 minutes of prying through the
steel of the vehicle. It’s surprisingly able, that contraption, bending
and cutting through steel. He was bleeding from injuries when he was
freed though. I took heaps of photos and also shot a video and I called
Borneo Post after that to sell the photos. Well, one of the reporters
rushed here to meet me and he said he was impressed with the photos.
Sourced: https://1800injured.care/car-accident/ 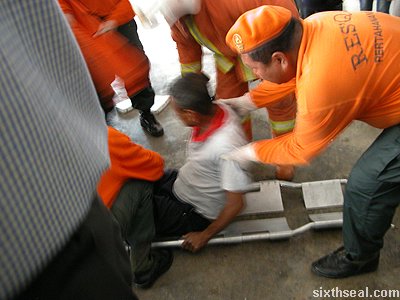 Civil Defense personnel were also there and helped move the man to a
waiting ambulance when he was finally freed. Back to the reporter, he
came to meet me at the booth and he was interested in purchasing the
photos. However, I had expected a minimum of RM 200 to part with the
copyrights. Unfortunately, he told me that Borneo Post only pays RM 20
– 30 to photos submitted by people who are not affiliated with the
paper, so I said I’m sorry to have wasted his time coz I wanted to keep
the copyrights unless the amount could convince me to relinquish it. 😉

It’s all good though, he says he understands and shook hands with me
and asked me more details about the accident. It was only after he left
that I remembered something I should have asked him…I would have
given him the photos for free if he would credit me i.e. put my name
and URL in the papers. It didn’t occur to me then. Oh well. 🙂