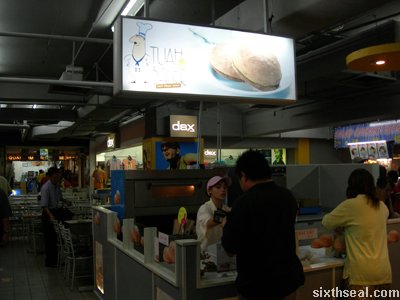 I was walking through Sarawak Plaza half stoned (okay, totally stoned) when I noticed an opening sign for Tuah Baker
with the tantalizingly munchies inducing quote “Good bread is the most
fundamentally satisfying of all foods; and good bread with fresh
butter, the greatest of all feasts.” 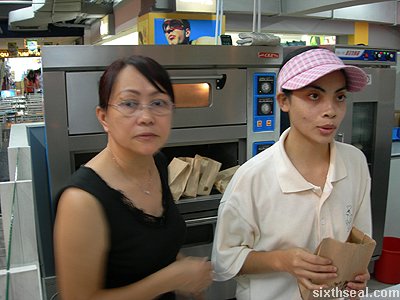 The sweet aroma of freshly baked bread ala Rotiboy steered my senses
to their booth in the middle of the food court – the smell of the
piping hot baked goods was strong enough to overpower all the other
proprietor’s offerings in the food court. Tuah Baker – Hot from oven is
heavily inspired by Rotiboy’s concept – except instead of the coffee
cream bun, they also have a chocolate cream bun. The buns go for RM 1.60 each and there are no discounts for more
than one purchase, unlike Rotiboy (which I’m comparing this bakery with
due to the remarkable similarity in concept). It was timely on our
behalf that we got there just as the goods came out from the oven, so
we got the only kind of bread one should eat – piping hot, almost
tongue scalding. 😉 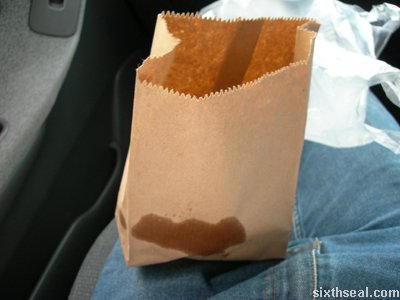 I got one coffee bun and one chocolate bun and would have got more,
except they’ll have gotten cold by the time I’ve gotten around to the
third one. This is what the coffee bun looks like – the buns all come
in a brown paper bag, except this one doesn’t have any bakery insignia
on it. The buns are finally put into the paper bag and “baked” for a
short period – so the paper bag feels toasty as well. 🙂 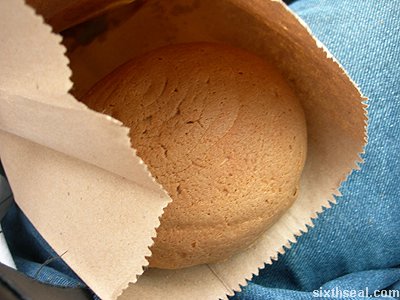 The buns are warm and crispy – there’s nothing like the remarkable
aroma of baked bread smelling of freshly brewed coffee with a crispy
crust around a wonderfully soft and fluffy bun. One of my friends,
being unfamiliar with Rotiboy products, remarked: “This tastes like
cake!”

Tuah Baker only sells the fresh from the oven coffee and chocolate
buns and it’s best to get them while a fresh batch is out of the oven.