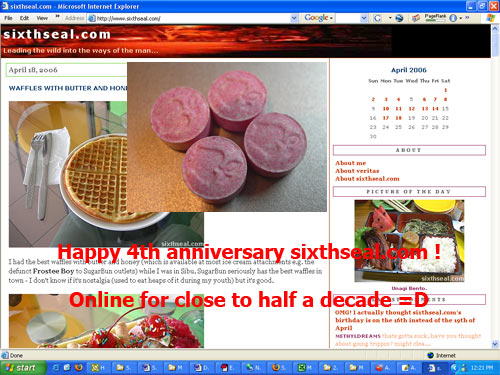 sixthseal.com celebrates it’s 4th anniversary today! It’s been up to close to half a decade and still going. There were several setbacks this year, mostly due to a drug possession case which severely restricted the nature of my posts so I’m going to do one last experience report to commemorate the fourth anniversary of the site (which is a traditionally unlucky number in Chinese culture, and certainly is an unlucky year for me). 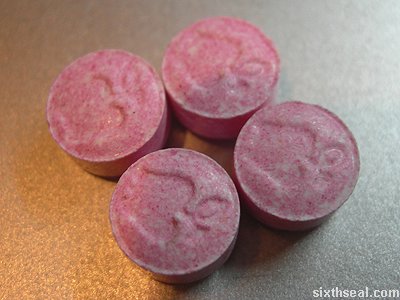 MDMA and ketamine pill combinations are actually pretty common in Malaysia. These are nicely pressed pills (hard) with beveled edges and a solid, high quality imprint of an apple. These are nicely done pills, not a shoddy home kitchen pill press product.

The subject (male, 60 kg) and a companion (female, 50 kg) swallowed 1 1/2 pills each (crushed up) on an empty stomach and interesting dissociative effects characteristic of ketamine started to manifest, so the decision was made to powder the remaining pill and insufflate it.

Subjective characteristics associated with MDMA (empathy, initial “Ecstasy coming up rush”, blurred vision) started to manifest so the remainder powdered pill was split into lines and selective sensory deprivation (scientists refer to it by the technical term “switching off the lights and turning up the music” ;)) was initiated. 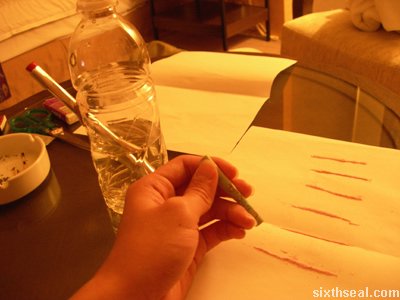 Nystagmus and mild hallucinations started setting in at the peak (T+ 0:45) and the lines were insufflated over an unknown period of time (snorting the powdered pills produced a “speedy” rush with dominating ketamine qualities e.g. confabulation and time-space disorientation). 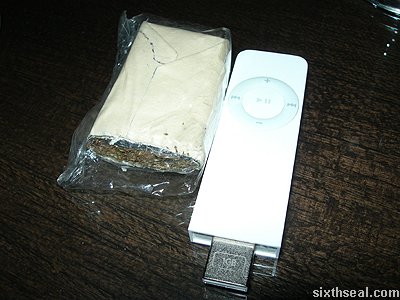 Cannabis was smoked at about T+ 1:30 and throughout the next few hours which mellowed out the trip (not an intended effect) but the visual anomalies and nystagmus and CNS MDMA effects lasted until T+ 3:00 before tapering off. Subject’s companion also reported similar experiences. Other substances consumed: 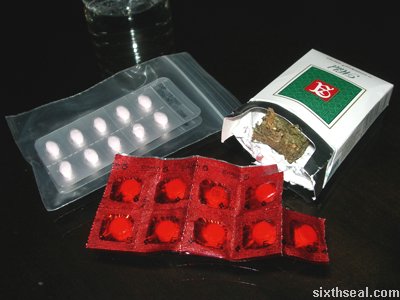 Rating: 6/10
(The “pig” imprinted pills circa December, 2005 from Kuching seems to have a higher MDMA content)

Thank you for allowing me to make one final experience report of a substance consumed in…er, 1906. 😉

Without further adieu, here’s a recap of the troubled history of sixthseal.com during the past year:

I got arrested, everyone knows that by now, so I won’t go through any drug or pharmaceutical posts.

Water slide for shit [sixthseal.com]
A reminder to the kids that opiate dependency is Not Fun (TM).

The bird nesting outside my window [sixthseal.com]
Before the H5N1 avian flu hit, people were actually rooting for birds! No shit!

I sneezed and my atomic bomb went off [sixthseal.com]
I still think this is the funniest post title for the last year. MapleSEA.com is another corporate time drainer – active in sixthseal.com via MapleStory since 2006.

The cough syrup that locals abuse [sixthseal.com]
In the name of science!!111

Google AdSense cheque [sixthseal.com]
sixthseal.com was doing good on Google AdSense (trial case study since the site involves drug and pharmaceutical content) until too many complaints flooded in (from other bloggers *rolls eyes*) and I was informed of it by my trial case handler after only the third cheque was received.

Dragons Playing Pearl Fireworks Mines and Shots review with videos [sixthseal.com]
sixthseal.com in “How not to light a cake firework”
(but he does it anyway)

Jong’s Crocodile Farm report [sixthseal.com]
sixthseal.com vs. Crocodiles.
A tribute to those of you who can identify with crocodile farms, reptilian or mammal. 😉

Despite everything, sixthseal.com has managed to conquer sand, sea and surf during the past year. We’ll see what challenges the next year provides. 🙂

sixthseal.com has been online for 4 years and counting and it won’t stop until I stop.

A big “Thank You” goes out to all the readers of sixthseal.com. The support is very much appreciated, as always.

Hail to the King, Baby!