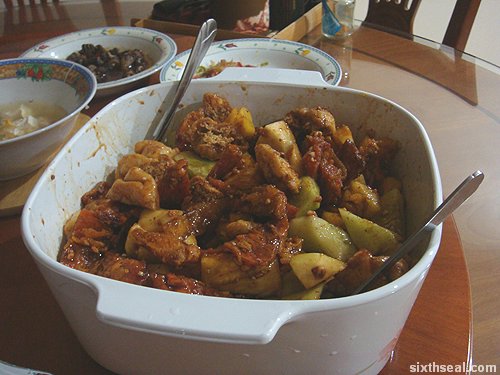 Rojak is a local variant of the fruit salad that is usually served with thick, dark sauce and topped with coarsely ground peanuts. It’s a very popular dish for snacking on and Bintangor rojak is one of the most famous rojak concoctions out there, much like Klang bak kut teh. Keing managed to get hold of the rojak sauce from her trip to Bintangor and we decided to make some rojak at Joyce’s house.

The sixthseal.com Guide to Making Rojak: 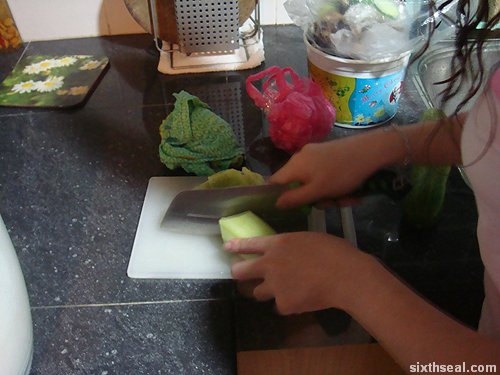 Slice some cucumbers into coarse chunks. You can peel the cucumbers beforehand if you don’t like the skin. It is important to slice both ends of a cucumber first and use the ends to rub the cucumber – this somehow attenuates the bitterness of the cucumber through reasons unknown to modern science. 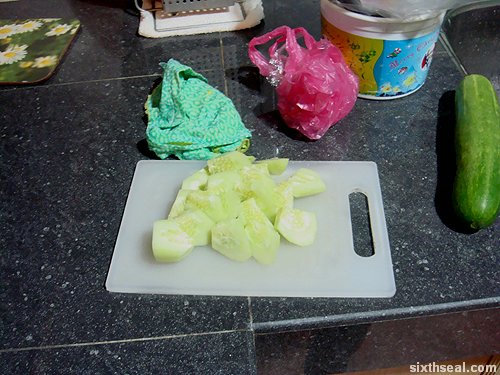 The cucumber should be processed to be roughly angular chunks instead of pure circular slices for authenticity. No one slices cucumbers into rojak – slicing cucumbers is better suited to sandwiches and eye masks. 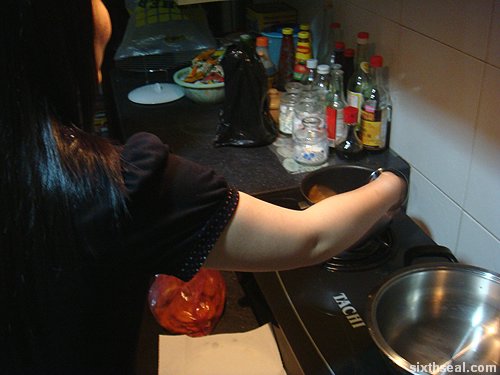 The next thing to do is to heat up some oil in a frying pan. This is for the tofu and sweet potato fried in batter (optional). 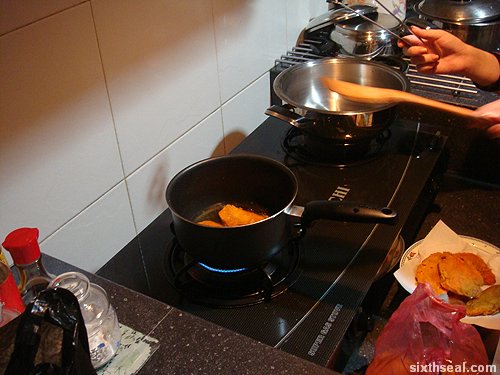 The sweet potato slices in batter can be bought from your friendly neighborhood kueh vendor for RM 0.30 per piece. This can be fried (basically reheated) later for the rojak. 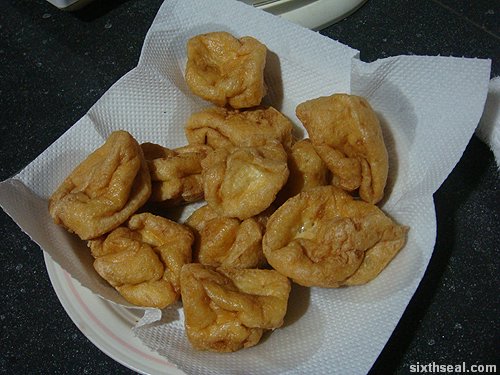 The tofu should be fried whole instead of being sliced. This is so the frying process only imparts a certain crunchiness to the tofu while maintaining a soft and sauce absorbing interior when sliced. 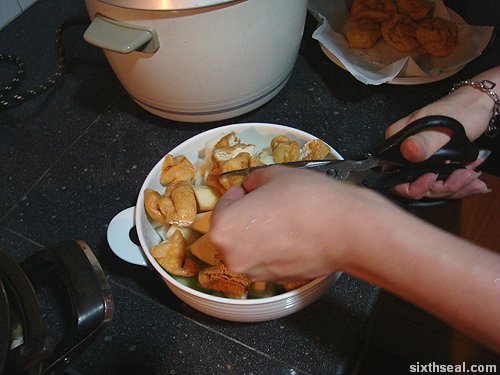 Joyce tells me that fried tofu should never be sliced – it flattens the entire thing. The proper method is to cut it using sharp kitchen scissors. 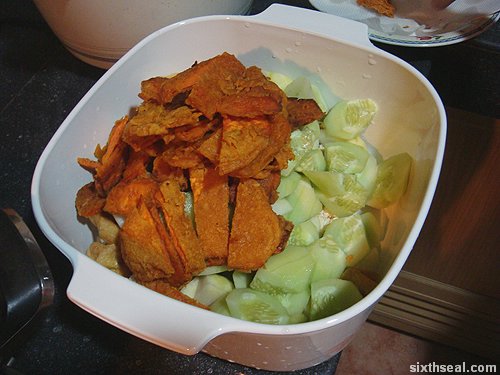 The build up of ingredients should be contained in a large base serving dish for easy tossing and mixing. 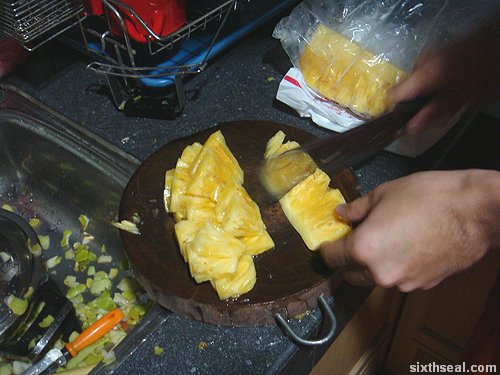 Next, the pineapples. Now, dealing with pineapples can be a bit of a prickly problem. This is due to the circumference of  “thorns” on a pineapple (which is one of the naturally occurring Fibonacci sequences in the world). The trick is to slice in an oblique direction down the entire length of the pineapple to cut out the “eyes”. The de-thorned pineapple can then be further sliced into appropriate lengths…
(Or you could just do it like us normal folks and get the pre-sliced pineapples) 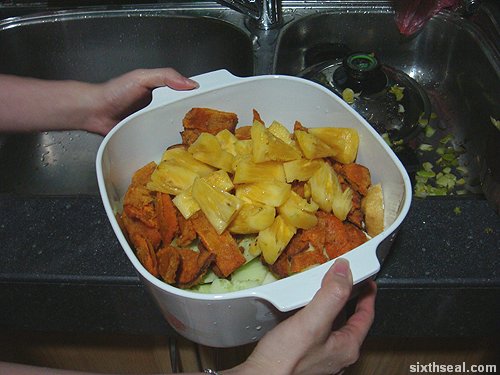 …and then chunks. Pineapple must be present in rojak despite the hassle involved. It’s not rojak if there’s no pineapple in it. 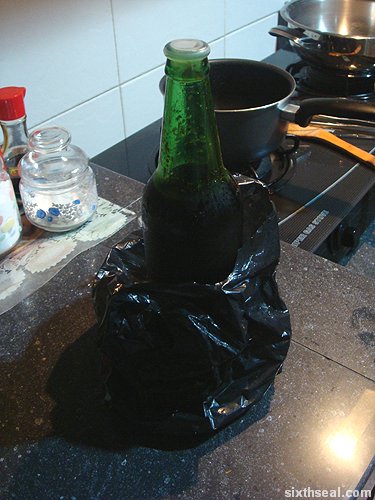 The essential ingredient in rojak is undoubtedly the rojak sauce. This is acquired from the famous stall in Bintangor and has a thick, gooey consistency. It’s RM 7 for a bottle of the sauce. 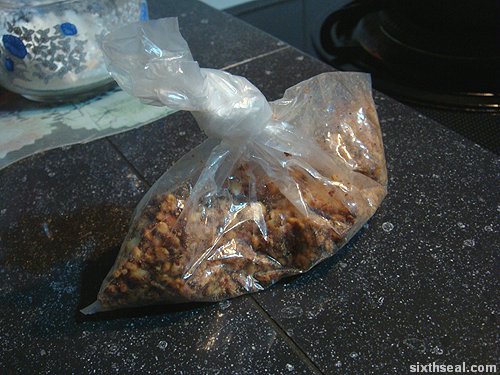 Ground peanuts is an optional but highly recommended ingredient. You can get it pre-ground in hypermarkets and other supermarkets or just do it yourself in a food processor/mill. 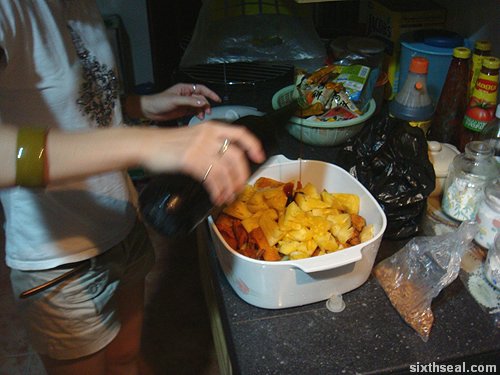 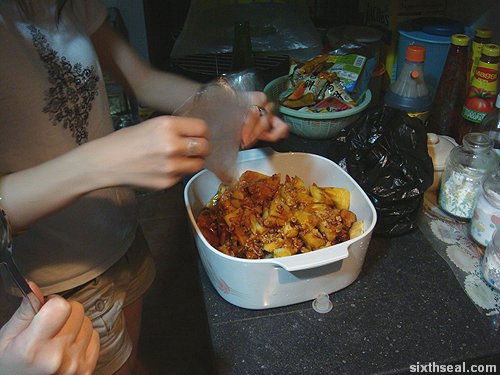 Sprinkle ground peanuts over it… 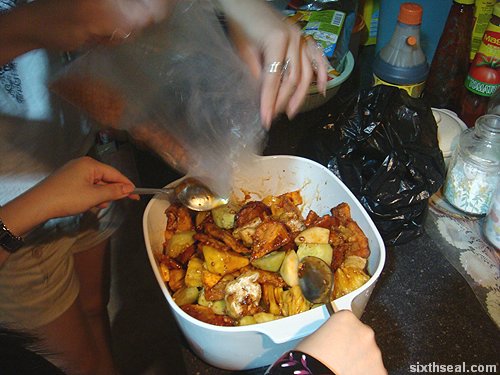 …and mix it well. Don’t toss it like a regular fruit salad, the pineapples are fragile and would likely bruise. Just mix it carefully, blending in all the sauce into the ingredients. 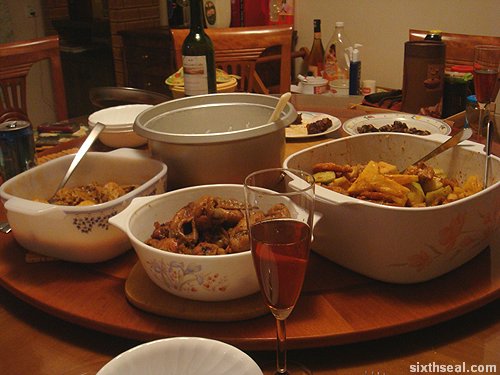 We also had Coke chicken, prepared by Joyce earlier in the day. It’s awesomely tender, the meat practically falls off the bone! It tastes great too. Katherine’s mom also cooked some curry chicken, and she brought a pot of it over and made it into a meal. 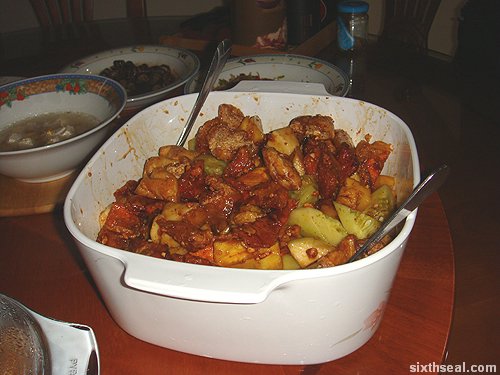 Here’s a closer look at the finished rojak.

25 thoughts on “Guide to making rojak”