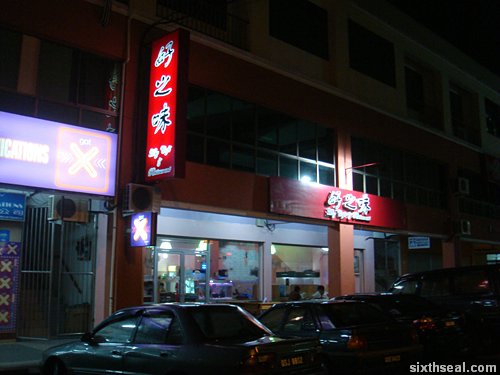 Haz Cafe and Restaurant is an eating establishment with a lot of weird angled aquariums inside. I initially thought it was a seafood restaurant but upon further investigation it turned out to be a shabu-shabu restaurant. These places have been popping up like mushrooms over here ever since the success of Mitsu Shabu Shabu. 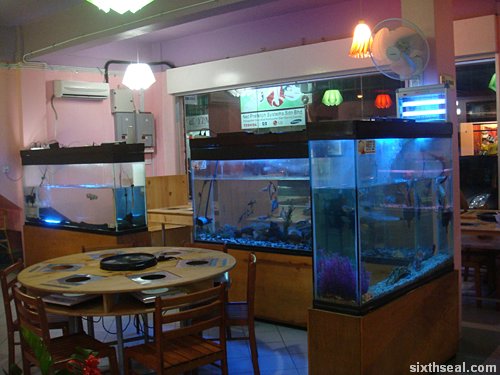 The interior of Haz Cafe is dominated by 90 degree angled aquariums which I found rather odd. It does work well as a demarcation fitting though – the seating arrangements are clearly delineated by the design. I went there with Clare and Cheryl for dinner since Cheryl was in town. 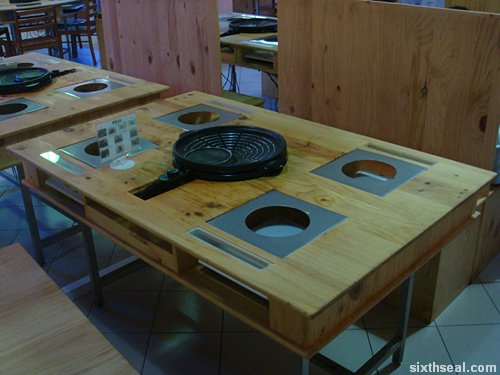 Haz Cafe has the standard fittings you’ll expect at a shabu shabu joint – there are receptacles for the pot of boiling broth and individual heating elements. The departure from orthodox shabu-shabu comes from the community BBQ grill in the middle. The place serves food that can either be dipped in broth or grilled with butter. 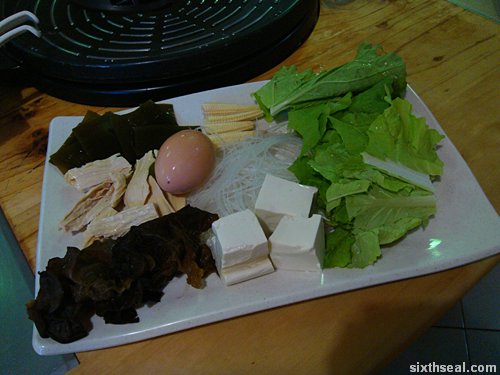 There is a platter full of the standard trimmings for adding gustatory perception (a pretentious word meaning taste and texture) to the broth – vegetables, rice vermicelli, nori (seaweed), tofu, mushrooms and an egg. 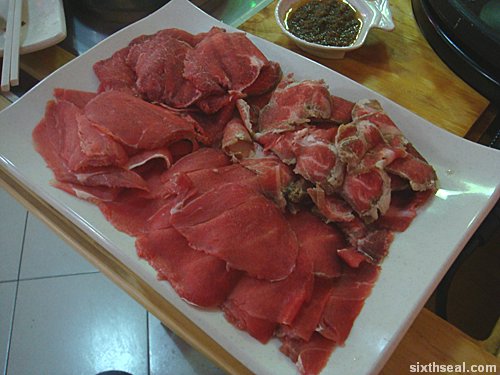 This is the mixed beef platter – it contains various cuts of beef from tenderloin to sirloin. The variety just makes me tingle in my loins. =D 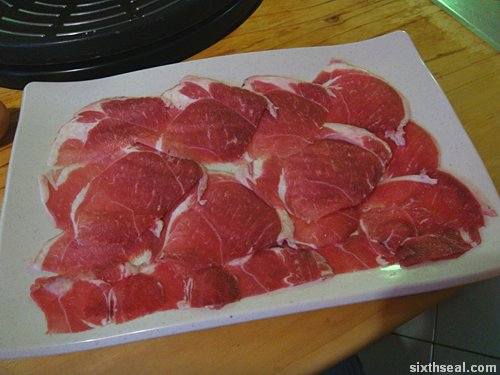 We also had another side order of a more marbled slice of beef. I can’t remember which part of the cow this came from. 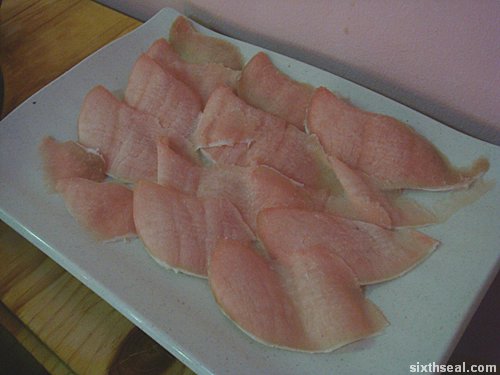 Oink Oink. This is the pork platter. Mmm…pork. 😉 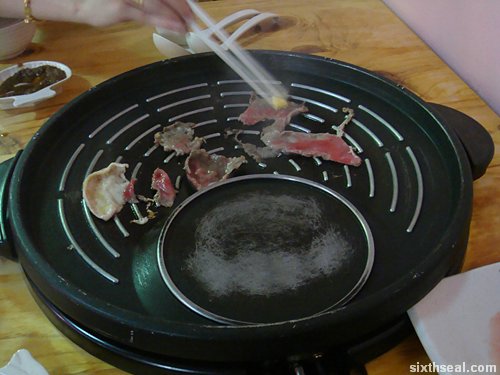 The meat can also be grilled on the central BBQ grill but the place is meant for shabu-shabu style eating.

It seems that the art of eating shabu-shabu is lost on most people so I have taken the liberty of showing how it’s supposed to done: 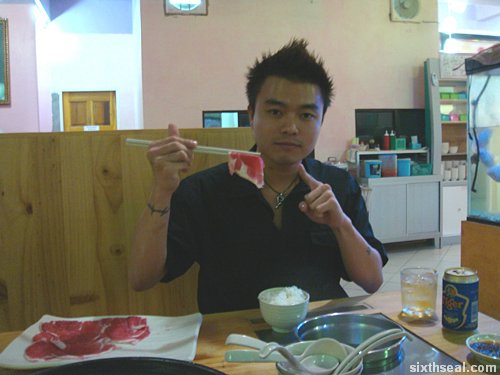 Step 1: Take piece of the sliver of meat/fish/crustacean. 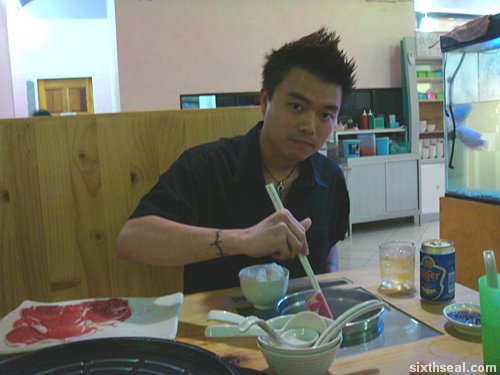 Step 2: Dip it with your chopsticks into the pot of boiling broth and start swishing it around. 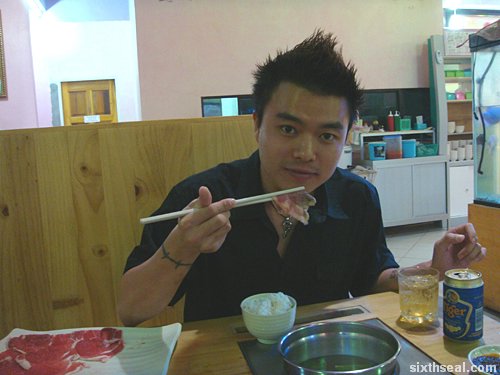 Step 3: Take it out again and consume. I know mine looks raw, but I like raw! 🙂 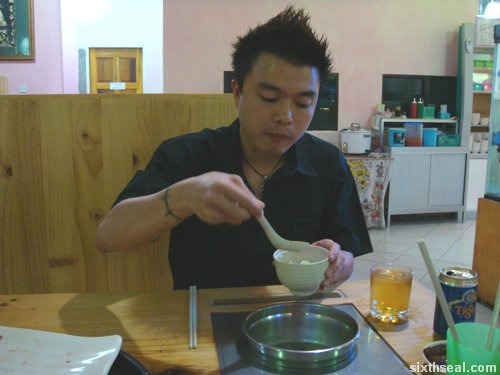 Step 4: Dump the remainder of your rice into the broth after the meal and consume the broth + rice mixture. 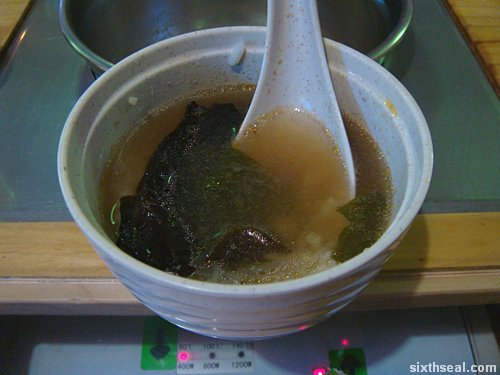 You can also pour the broth into the rice if there’s not a lot left, but this is a departure from Tradition (TM). 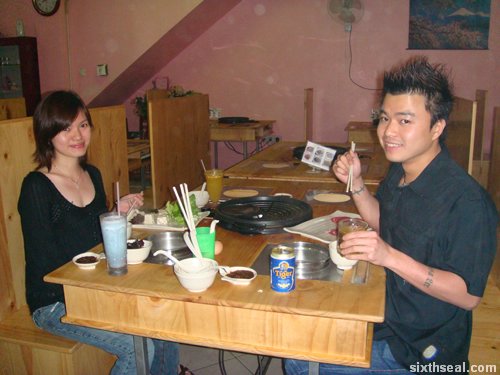 This is Cheryl Lim – an auditor who gets to travel around to places like Langkawi but works till late in the night, which takes much of the fun out of business travel.

Thanks for getting me the duty free cigarettes, Cheryl! 🙂

24 thoughts on “Haz Cafe and Restaurant”