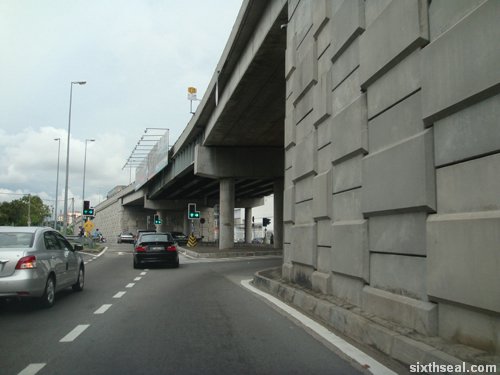 I
was blindsided by a traffic police roadblock at the U-turn from Kelana
Jaya LRT station leading to Jalan Bahagia and Giant LDP while heading
towards the Kelana Parkview TMpoint to get my Streamyx sorted out. The
thing about KL U-turns is that it’s completely blocked by a mass of
concrete so you don’t know what’s on the other side, especially if
you’re going too fast.

Anyway, I did such a U-turn the other day
and immediately ran into a roadblock. It was so near the exit of the
U-turn that it’s a good thing I didn’t run literally into the
roadblock. I had hoped for a break since the traffic police was
stopping the car in front of me, so I quickly pulled the seatbelt on –
but no such luck. The eagle-eyed police saw me and gestured at me to
pull over.

I had wanted to take a photo – my first traffic
ticket in KL, just after 5 days of driving over here, but that would
ruin my chances of getting off without a ticket since a photo would
mean they would have to do it the Proper Way (TM). Anyway, the
traffic police did the usual license and registration thing (except
over here it’s MyKad/IC and driving license), while I did my best pitch:

HB: Eh, sorry tuan,
I’m new to KL, just got here from Sarawak and I don’t know the way so I
was just reaching towards the back to get my map. I had the seatbelt on
all along.
Police: Map? What map? There’s no map in your car. *peers into the back seat of my car*
HB: Er…I
meant I was looking at the road signs. I have problems with my eyesight
so I had to squint a little. I just loosened the seatbelt, I had it on
all the time.
Police: No, you didn’t. You put it on when you saw me.
HB: Yes, I did, I had it on all the time. Honest. Anyway, since I’m new here, I was hoping you could help me out.
*I pull out my wallet and discreetly thumbed a RM 50 note out, just a little, to see his reaction*
Police: Hmm…well…
HB: Okay with you officer? Help me out here.
Police: Okay, like this also good. You senang, I senang. (Less hassle for the both of us) 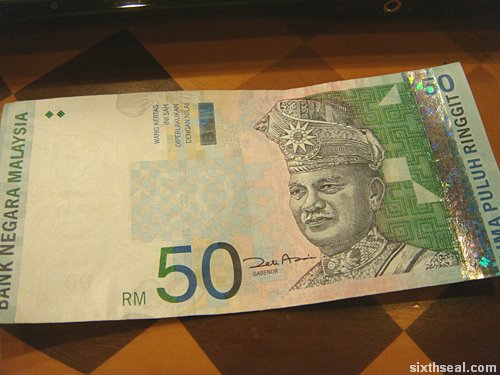 I passed him the RM 50 note and he passed me back my MyKad and driver’s license. The good Gabenor talks, and bullshit walks.

Now,
this police gives me a big ass grin and smiled at me in an
uncharacteristically friendly manner as I was pulling off. He even
waved at me, I shit you not.

This got me wondering…have I given too much? I don’t want to spoil the market, what are the rates over here in KL?

I
don’t use a seatbelt coz I see it as a victim less crime. I don’t like
being restrained and I don’t see how it affects other people. It does
no harm to anyone except myself.

Nevertheless, how much do you pay for getting off without a ticket in KL? Can someone enlighten me on the rates for:
Driving without a seatbelt
Driving over the speed limit
Tinted windows
DUI/DWI

Rates for JPJ and our fine traffic police would be much appreciated.

I don’t want to spoil the market for my fellow KL-lites.