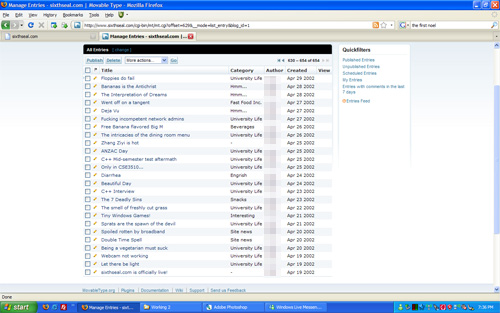 My pet HDS project has been neglected. 🙁

I work long hours and post a new update every day after work so it’s hard for me to continue HDS. I have also taken the long time involved in completing it (1 year!!!) into consideration, so I have decided to…

I’ve gotten someone to do all my data entry for full integration into the sixthseal.com database for the posts from April 2002 – November 2006 and from her pace, I estimate she’ll be done by middle of January 2009.

Her user name has been applied with liberal layers of mosaic since I used her real name. The posts will be under “Poh Huai Bin” though, as opposed to “Huai Bin” which is my account. I promised her a huge bonus for early completion. 🙂

The full sixthseal.com will be up on the 15th!

Pinky said I spoil the market and paid too much to get it done, but I think it’s worth it lor coz it’s a very tedious task. It’s been so long and I want my blog to be fully up and searchable e.g. integrated into the CMS.

Guess how much I’m paying to outsource this? How much would you be willing to do it for?

89 thoughts on “Outsource IT!”