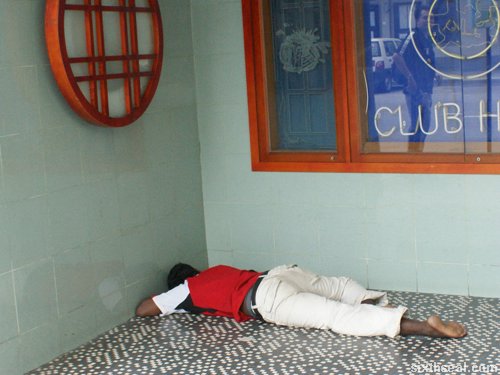 My landlord is this effeminate 40 year old virgin (no, seriously) who has a penchant for nitpicking. The first time I met him, he launched into a tirade about the previous tenant over a single missing curtain ring. No shit.

Well, said landlord dropped by my place early this morning. He’s supposed to pass me back my deposit since I’m moving out on the 23rd of this month. He was late by an hour, waltzed into my place and…started complaining.

If Steppenwolf had sang Born to Complain instead of Born to be Wild, my landlord would have been on the cover of the album.

Hell, he would have snagged Malaysia a Gold Medal if the Olympics had a sport called Complaining. He certainly has a flair for it.

I listened to him rant for half an hour about the breakfast bar, niggle about the dust, and go on and on about the state of the guest toilet (which I don’t use) before I shooed him out and told him I have to get to work.

Jesus Christ, this is one natural born complainer. Pure talent. I was shocked and awed by his aptitude for grumbling.

He should have been on the cover of Maximum Whinge and Moan.

30 thoughts on “Born to Complain”