There is a decripict looking place behind Berjaya Times Square that is supposed to serve a wide range of Cantonese style double boiled soup. It doesn’t have a name. It seems that people call it “The place beneath the huge tree“. Jeanie told me about it and sold me on the fact that they have some interesting soups with unusual ingredients like anteater (the animal).

I’m not a soup person but the prospect of eating wild animels is totally down my alley so we drove there to have dinner at around 10 pm. Jeanie was sick that day too and she’s a firm believer in the Chinese concepts of “heaty” and “cold” food so she wanted to have some chicken soup.

I can’t say I share the same beliefs since I take everything that hasn’t been scientifically proven with an armful of salt.

The place seems to be very popular – most of the exotic soups have sold out by the time we got there so I chose a black kampung chicken with ginseng roots while Jeanie had their famous coconut chicken soup.

The soup is kept in a steamer so it’s still nice and hot when they serve it.

It should be noted that they also serve other food – the braised pork leg was recommended to us and I took it up, being a huge fan of swine based dishes. It’s cooked with chillis so it’s slightly spicy – this makes it more like the stuff my mom makes. I like the fact that they have a lot of fatty meat instead of the lean meat that most establishment serves.

This is the black kampung chicken with ginseng soup. I was told that the ginseng comes from a special part of the root – it’s the hairy bits from the ginseng root that’s used in this soup.

It tastes pretty good and there’s also other herbs in there to enhance the taste. The chicken becomes tasteless after being made into soup though. 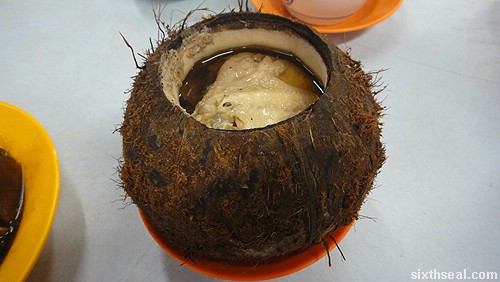 The coconut chicken soup is one of their flagship dishes – it comes served in a whole coconut shell and you can taste hints of the coconut and the ginseng they put in it too.

Jeanie likes chicken soup. Hell, it has become a bit of an inside joke since she drinks so much chicken soup. I once asked my grandma if she has chicken soup when Jeanie came for dinner. Turns out she did.

Anyway, you’re supposed to eat the soup with rice but to be honest, the only way that you can do that is by heavily saturating the chicken with lots of soy sauce and chilli (provided). The chicken loses all flavor when it’s cooked like this – the taste is transferred to the soup itself.

The place is a little hard to find and your dining companions will likely include the resident canines and felines but they serve pretty good soup and their pork leg is divine! The soups are priced from RM 7 upwards.

I’m going to go earlier next time to get the more exotic soups.