Agua restaurant is located at the new Straits Quay in Penang. It specializes in Mediterranean cuisine and the name doesn’t exactly roll off the tongue that well since it sounds like something else in Hokkien. Heh.

I remember the first authentic Mediterranean restaurant I’ve been to – Dion in Melbourne, a Greek establishment where we went to celebrate an ex-classmate’s birthday way back in early 2003. That’s some classic food review action going on there. 😉

I was in Penang over the weekend and made plans to meet up with Cheryl. Straits Quay is a relatively upmarket place by the marina housing designer labels like Versace, but according to Cheryl most people go there for the food. We perused the F&B restaurants listed in the directory and decided to check out Agua.

The interior of Agua is decked out really nicely – there are vintage looking paintings on the wall and a long bar to one side. You would expect prices to be exorbitant in a place like this but it’s really quite reasonable – they have express lunch sets starting from RM 22++ and more lavish three course meals for RM 45++.

Pumpkin and Orange Soup (RM 14.90)
This is an interesting interplay of flavors – you can literally taste both the sweet pumpkin and the tart citrus in the soup. I love the croutons as well – it’s crunchy and goes very well with the soup.

Spicy Sweet Pepper and Tomato (RM 14.90)
Cheryl opted for this soup so we can share the dishes we have. It’s very spicy and perfect as an appetizer!

Hummus (RM 14.90)
How can you go to a Mediterranean restaurant and not order hummus? Lainey had this one – it’s off the a la carte menu and the bread tastes very fresh. I like the hummus too – you can just see a sheen of olive oil on it but it’s really healthy stuff.

Fish St. Tropez
I reckon this would go perfectly with the red wine I ordered. It’s poached fish in a white wine, cream and mushroom sauce. The fish is soft and a squeeze of lemon does wonders to the taste. I liked the sauce and the sprinkling of herbs on top of the fillets.

Mediterranean pasta
Lainey opted for this one. I didn’t quite like the taste but I’ve never liked tomato based sauces anyway, I’m more of an alfredo kinda guy. It tastes pretty authentic though with just a pure and clean-on-the-palate mixture of tomatoes, onions and peppers.

Mustard marinated roast beef
It is listed as marinated beef roasted and sliced thinly with salad and rosemary potatoes. Cheryl had this for her main dish and I was surprised when I tried it coz I didn’t expect much from the description. The thin slices of beef is very flavorful and slightly juicy. It’s served cold and I think I ended up eating a lot of Cheryl’s marinated roast beef. Tasty!

Single scoop ice cream
The girls had a scoop of chocolate and strawberry ice cream. The serving sundae cups are frozen before the ice cream is put in – you don’t put hot food on a cold plate and you don’t put cold desserts in a room temperature cup. Agua understands that and it’s this attention to detail that I like.

Figs in Brandy Syrup (RM 16.90)
I thought they served me the wrong dessert at first – I expected dry figs instead but this concoction topped with vanilla ice cream just hits the spot. The brandy syrup goes very well with the figs.

The bill came up to RM 156.50 for three and that’s pretty reasonable considering I had wine with my lunch. Agua gets a thumbs up from me – the service is impeccable and attentive and we were there for quite a while, just catching up, and you never feel like you’re obliged to leave. It was great meeting up with you again Cheryl! 🙂

Agua also has Iberico ham on the menu and their signature dish is the Valencia paella with seafood, chicken and pork. It takes too long to prepare though and we had to drive down to KL after, so we reluctantly opted out of that. However, Cheryl is coming down to KL soon and she was talking about eating at Sanbanto coz she’s heard so much about it. 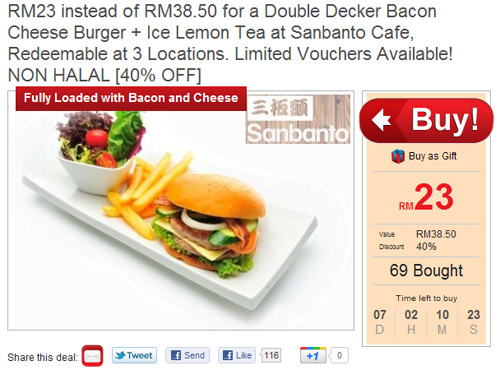 Sanbanto has achieved almost a cult status among porcine lovers in KL. They have their own butchery and their menu is filled with pork delights. I was surfing MilkADeal and I came across this promotion for a Double Decker Bacon Cheese Burger. Sanbanto makes their own patties and it’s a coincidence that the redemption period for this is when Cheryl is coming down so I got one of the vouchers.

Let’s go and try all the legendary pork dishes in Sanbanto Cheryl! 😀