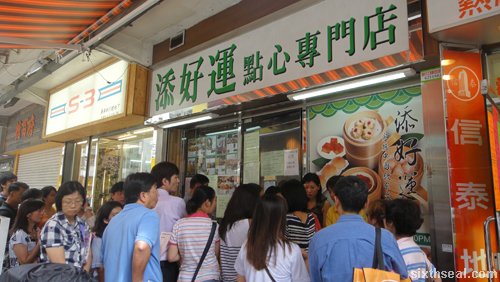 Tim Ho Wan is reportedly the best dim sum restaurant in Hong Kong. I’ve heard a lot of good things about it and even the concierge at our hotel recommended the place when we asked where we can eat dim sum. 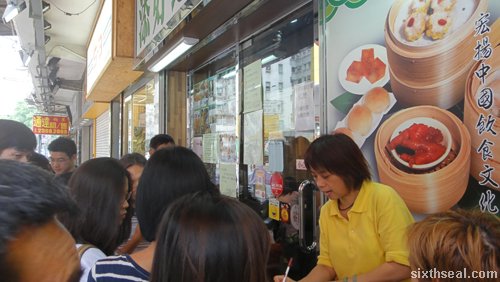 I was already dead set on eating here before I even got to HK. I finally convinced the ex to head down to Mongkok to check out Tim Hou Wan Dim Sum on our very last day there. This is the outlet which received One Michelin Star! 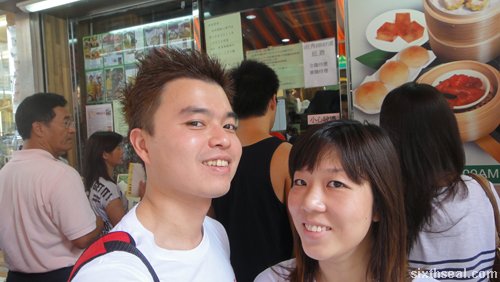 You see, the problem was that the concierge told us that it’s the best dim sum in Hong Kong but you might have to wait up to 3 hours. I have heard about the legendary waiting time but also about the equally impressive food so I really wanted to go. 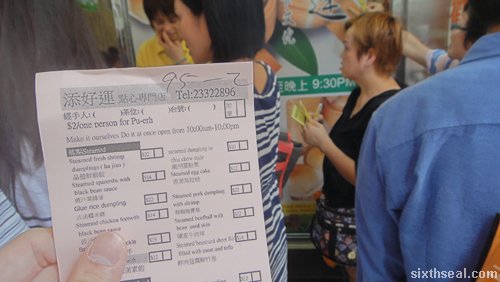 Tim Ho Wan has a lot of branches now but the original is in Mongkok. It is run by an ex Lung King Heen (a prestigious 3 Michelin star restaurant in Four Seasons Hotel) chef and the reason why it’s so popular with the locals is coz it’s cheap and delicious. 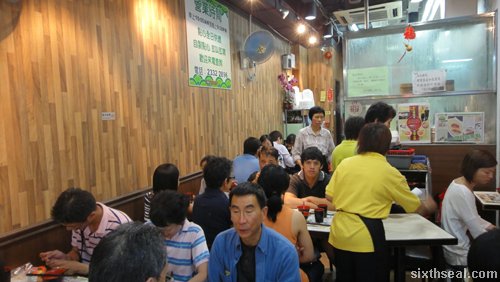 We waited for over an hour before we managed to get in – the menu is very limited and you choose what you want before you enter the restaurant. There’s a perpetual long queue in front of the dim sum shop. I think Tim Hou Wan has had some altercations with its neighbors coz everyone was told to keep within the confines and not stand in front of the shops beside it. 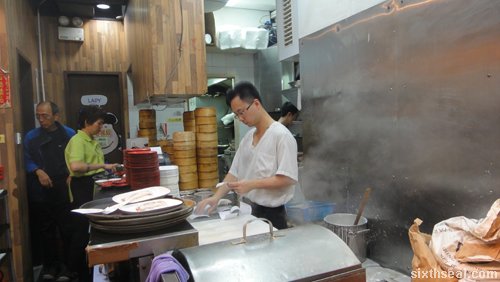 Anyway, we were finally seated in the extremely small and cramped dim sum restaurant. I love the ambiance though – it’s just people enjoying dim sum and you don’t feel pressured to leave (which I half expected). 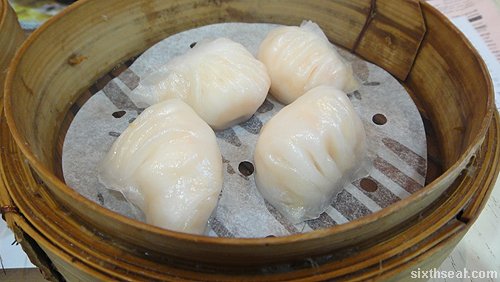 Har Kow (Steamed Fresh Shrimp Dumplings) – HKD 22
I loved it! I always like har kow, it’s an order I judge each dim sum place by and Tim Ho Wan did not disappoint. The prawns are huge and juicy and the wrap is delicate and thin. It’s perfection! 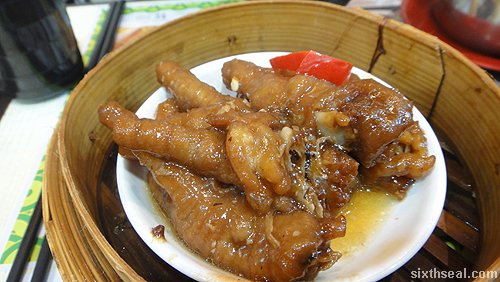 Steamed Chicken Feet With Black Bean Sauce – HKD 14
I like how the chicken feet came out just right. Dim sum is cooked fresh in Tim Ho Wan and the black bean sauce complements the chicken feet nicely. It has a spicy note from the chillies too! Delicious. 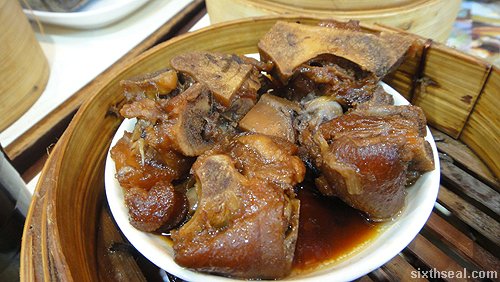 Braised Pig Knuckle in Sauce – HKD 15
Hmm…this was a major letdown. There’s more bone than meat or skin/fat and I’ve had much better braised pig knuckle in Malaysia. I would avoid this. It’s very meh. 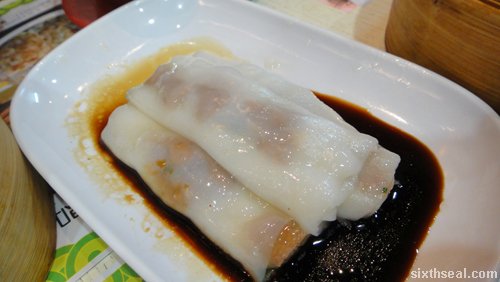 Vermicelli Roll Stuffed with Pig’s Liver – HKD 16
OMG! This is like an orgasm in your mouth! It’s chee cheong fun, except it’s stuffed with pig liver. 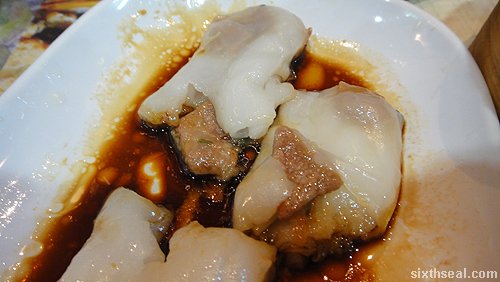 Here’s what it looks like. Don’t be fooled by the simple presentation – the vermicelli roll wrapping is translucently thin and the pig liver is extremely creamy with a very rich mouth-feel. Highly recommended! 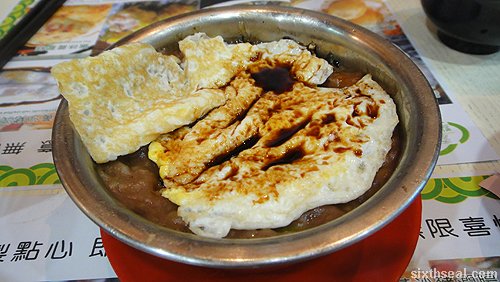 Steamed Rice with Beef and Pan-fried Egg – HKD 17
This was a mistake. I wanted to have the lou mai kai but my ex accidentally ticked this one instead coz she thought it was lou mai kai in Cantonese. 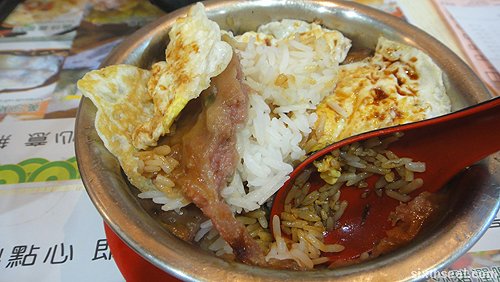 It was alright, but we didn’t come here to eat a rice dish. 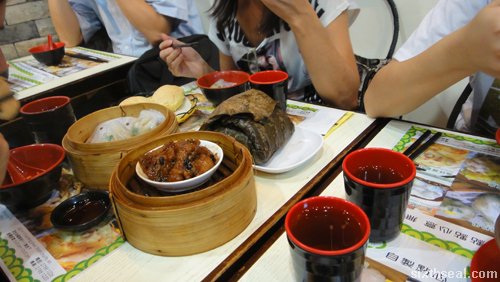 The actual lou mai kai (sticky glutenous rice) looks like this – unfortunately it’s our neighbors and we didn’t know them well enough to ask for a bite. ;) 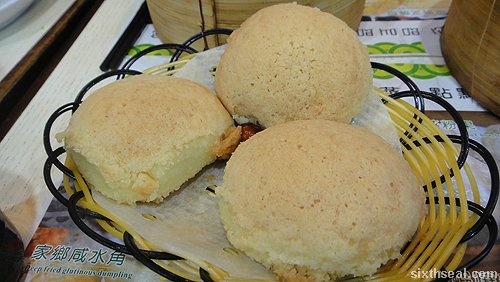 Baked Bun with BBQ Pork – HKD 14
This is what Tim Hou Wan is famous for. It’s their signature dish – almost everyone I saw ordered at least one basket of this. There are three buns in a basket and it’s not enough! 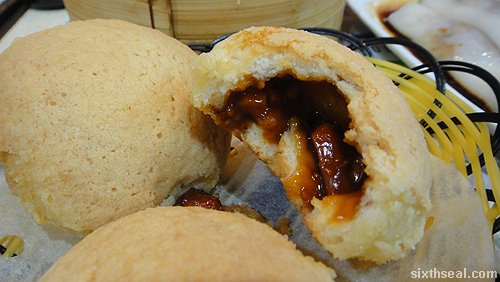 The bun is has a layer of crispy goodness and the rest is exquisitely soft and fluffy. I don’t know how they managed to achieve that texture complexity but it works very well. It’s basically a baked char siew pau but it’s so delicious that I was tempted to order more. The BBQ pork filling is sweet and savory, tender, done to perfection. I could eat this all year! You *have* to order this. 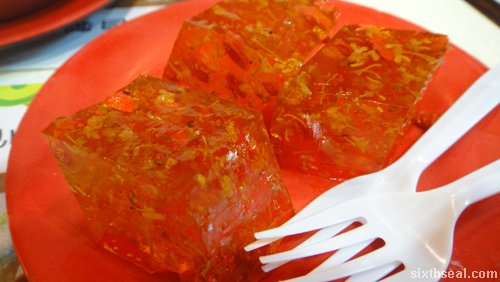 Tonic Medlar and Petal Cake – HKD 10
I don’t know what this is. The translation doesn’t even make sense but Jeanie told me that it’ll be delicious…and damn was she right! 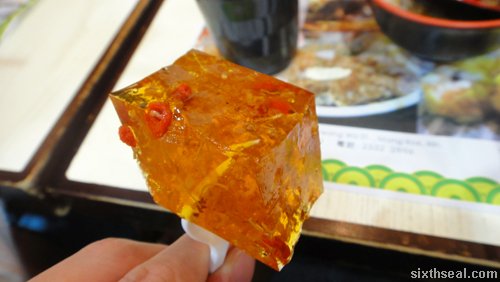 It’s made with goji berries and Osmanthus flowers. Those are the only two things I could identify, but there’s a host of herbal goodies inside the jelly. You can taste the flowers and berries when you bite into the jelly – they’re whole and intact! It’s like drinking (eating?) tong shui that has been solidified into Jello. This chilled jelly is wonderful – a perfect ending to a near perfect meal. 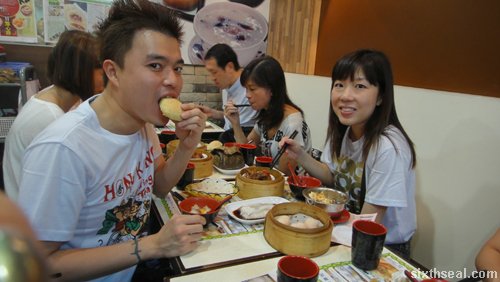 Tim Hou Wan Dim Sum Specialists might be a tad overrated but it’s still great dim sum at unbeatable prices. It only cost us HKD 112 (about RM 46) for two, inclusive of tea. The baked char siew bun is absolutely fabulous! 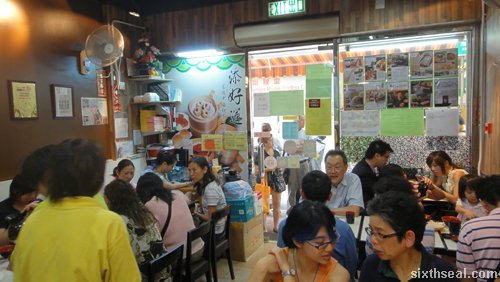 However, be prepared to wait to get into Tim Hou Wan in Mongkok – it’s usually about an hour, so it’s not too bad. Also, the tables are really small so if you order a lot of non-stackable items, you’ll have to eat them really fast, lest you invade another table’s space. :)